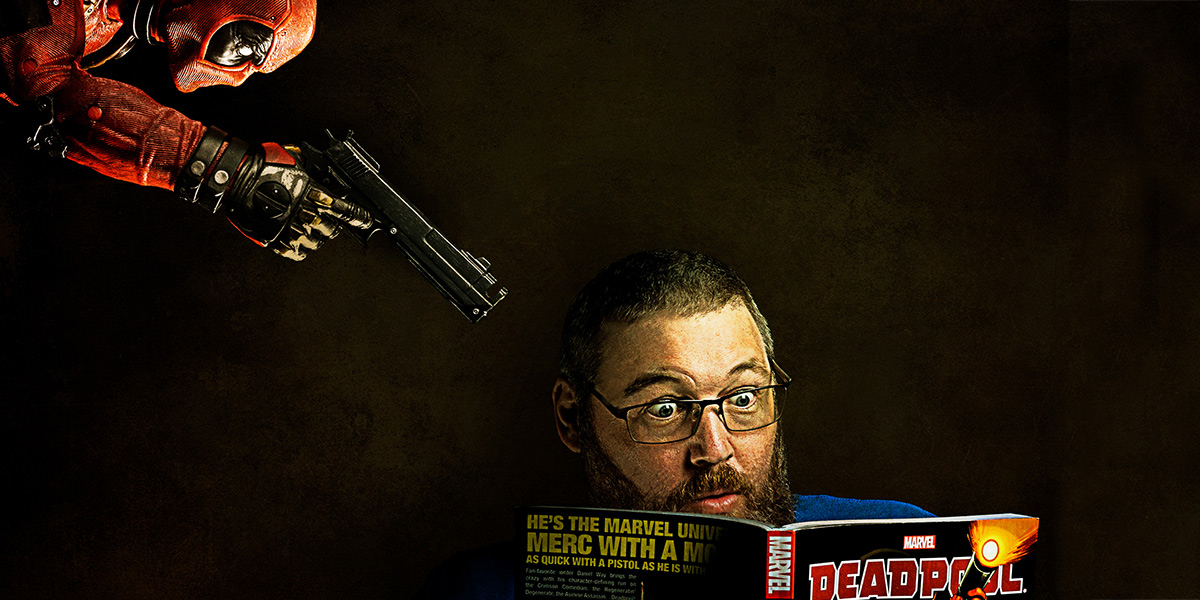 If you follow my work, either on this blog, or on Instagram you won’t be surprised to learn that I am a huge Deadpool fan. I have read every comic he appears in (that I can find). The movies are on a constant rotation on my TV. I also have multiple Deadpool action figures, ranging from LEGO to an impressive, 18-inch NECA model (though it’s not the size that counts, right?). It is fair to say that I am a full-on, raging Deadpool-o-phile.

I tend to ask a lot of questions. If you look at the stuff I wrote for this blog, you’ll see some “what” posts (often, what have I been up to lately). Also a whole lot of “how” posts (how did I get the shot?). However, the most interesting questions for me start with “why.” What and how questions tend to lead toward trivia—often interesting, sometimes humourous, and occasionally borderline educational trivia, but trivia just the same. Why questions, on the other hand, tend to lead toward deeper discussions. If you really want to understand something, ask why questions and prepare to dig deep.

Not that I want to get super pedantic about the distinction. The sharper among you are currently heading to the comments to say, “But, Dave, you can ask deep what questions, too!” (As a recovering pedant, I approve of your superior insight and wit.) Of course why questions can lurk as what questions. For example, “What motivates you to do toy photography?” is just another way to say, “Why do you like toy photography?”

My point, which I am painfully slowly getting around to making, is that I like asking questions that lead to deeper, insightful answers. As an artist, digging deeper is what it’s all about. Given my medium of choice is toy photography, and toy photography by its nature is strongly character driven, the characters one chooses to use in one’s art is likely highly reflective of each artist’s personality and motivations. A window into their creative soul, if you will.

So, given my apparent uber-fandom of Deadpool, and my interest in digging deeper, I think it’s time I try to answer the question…

Man that intro was long winded, eh? Thanks for sticking with me.

So what do I find so fascinating about Deadpool? Let’s break it down.

He is an anti-hero

Sometimes Deadpool is a good guy with a good heart. Sometimes he just kills for money. Often he is somewhere in-between. Depending on who is writing him, Deadpool can be pretty much anything at any point in time. That flexibility is hugely appealing. This means I can put him in any scene at any time and it’s believable and within character. I mean, how many characters do you know that can enjoy a super violent revenge attack on a freeway, then go home, put on slippers and discuss Ikea furniture with his elderly blind roommate, all without skipping a beat?

Certainly not Batman, or Darth Vader, (or those damned dirty Smurfs!).

Speaking of being up for anything…

He has a healing factor

Deadpool is, basically, immortal, and can regrow any part of himself that gets severed. I’m not sure that fact is actually a draw for the character in and of itself. However, this does means he can take incredible risks to accomplish his goals, escape a predicament or nail a punchline. That part is a huge draw for me.

Deadpool has a massive sense of humour. He is always making wisecracks, and making sarcastic comments, both in his darkest hours and his lightest moments. This is why he’s called the Merc with the Mouth, after all. My eHarmony profile didn’t lie. I love a woman(anti-)hero with a sense of humour.

He has his softer side, but I think you will find he has some hard parts, too. That puts everything on the table. There is no holding back with the Merc with the Mouth.

With Deadpool, there’s nothing he won’t (plausibly) do—except kill baby Hitler. (Pro tip to any time-traveling vigilantes: Visit Hitler in his teenage years, after the baby fat melts off. It is much easier to kill a teenage Hitler than a baby one. Just another example of the value this blog provides to our readers.)

I think it’s clear a pattern is emerging here. The main appeal seems to be that with Deadpool, anything can and will happen in and out of his universe. While we’re on the subject of universes…

Deadpool is super-cognizant of the fact that he is a work of fiction. In the comics, he is fully aware he is a comic book character (and uses it to his advantage). In the movies, he knows he’s on a screen in front of the audience. Regardless of medium, Deadpool is constantly breaking the fourth wall and talking to the audience (even inside other fourth wall breaks—that’s 16 walls!). This leads to a whole lot of humour, and possibilities that range far outside the bounds of whatever story he happens to be in.

Speaking of asking questions [Editor: Super awkward segue, Dave!], if you were to ask me, “Dave, what is your favourite Deadpool fourth wall break?” [Editor: Nice save!] I would answer thusly: When Deadpool was on the run in Deadpool issue #300. He hails a car and jumps in, only to find the driver is the issue’s writer, Gerry Duggan (who he subsequently kills—it was Gerry’s last issue). Yep, Deadpool killed his own writer… f**king fantastic!

After that scene, Wade Wilson, Deadpools real name, is the credited author. He writes his own comics! To me, this makes making images that break my own fourth wall that much more of a natural fit.

Canada is the greatest nation on earth. This is a non-biased statement [Editor: not true]. You can trust me [Editor: nope] because I am also Canadian [Editor: Ok, this part is legit] so I speak from firsthand experience. Deadpool is from Regina (yes, that does rhyme with the word you are now thinking of), Saskatchewan. That is a city in a province smack dab in the middle-left of Canada. (For the Americans reading this, despite what you may have heard on TV, Canada is actually a real place. If you look at any of your maps, it is hiding in that blank spot right at the top). Wolverine is also from Canada, which means that not only are we a land of snow, hockey and maple-flavoured freedom, we’re also a source of morally ambiguous anti-heroes. Go us!

Really, I don’t think Deadpool’s nationality really matters to the formation of the character. Aside from a sarcastic, self-deprecating sense of humour (a famously Canadian trait), he really isn’t a shining example of Canadiana. However, there aren’t many comic book characters who come from the Great White North, so the fondness of a shared origin is a natural fit. It is icing on the cake that Ryan Reynolds, the actor who plays Deadpool in the movies, is also Canadian (and is actually a great example of the breed, both in looks and personality).

So, looking at the above, I think it’s safe to assume the answer to “Why Deadpool?” has to do with a lack of limits. The character can be anything at any time, and exists outside his own universe. This makes him appealing to me as my ability to use him to tell stories is only limited by my own imagination, and not bound by the character himself. He can go anywhere and do anything. Add the fact that he is in on his own jokes, and that leads to a very appealing character for me.

I am not sure if you, the reader, gets more insight into Deadpool the character, or Dave the artist by reading this. But that’s the beauty of the why questions: You don’t really know where the answer will lead. You just know it’s going to take you somewhere. For now, that somewhere is the end of this post. Congrats for getting here with me!

Do you have a favourite character? Let me know about it in the comments below.