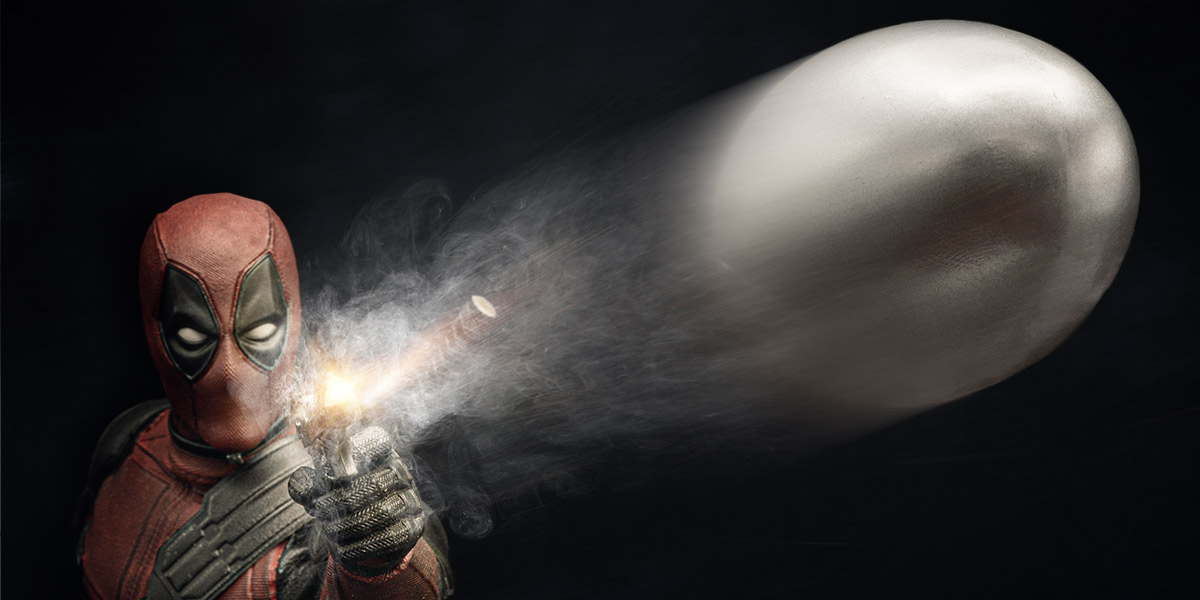 Ya know how sometimes you just wanna go shoot something? Well, I do. A few days ago I was channeling my inner Deadpool and thought to myself, “Self, I really want to do a shot where Deadpool is shooting at the camera.”

Turns out I thought it was a great idea, though in the interest of safety I decided that Deadpool should shoot just to the side of the camera. Me, myself, and I high-fived each other and got to work.

The shot I had in mind was a freeze-frame of a bullet coming out of Deadpool’s gun. The bullet would be large in the frame, coming out of the barrel smoke. It would be all dramatic and full of motion and excitement—an image that would be thrilling beyond words. Something that would cause Keanu Reeves to utter his magic catchphrase: “Whoa.”

At least that’s what my idea inner voice said. The craftsman in me, a known pessimist, just hoped it wouldn’t suck.

In search of a bullet

The hard part of this shot was getting a suitable bullet. I am not above compositing in various parts of other images to create my own. I knew my favourite 3D model site, PixelSquid, had a few bullets I could use. However I’ve been on a “make my own props” kick lately, and I really wanted to see what I could come up with on my own.

Since the bullet was coming toward the camera, it would be larger than life, so I didn’t have to worry too much about scale. This left my options pretty wide open. I also have almost no experience with actual guns and bullets, so I had few preconceived notions of what a bullet in flight looks like.

I thought about carving a bullet out of foam, but I am more of a straight-line builder, and bullets are symmetrically round. I wrote that idea off and searched the house for a candidate: plastic eggs.

I’m not talking about those plastic Easter eggs that pop open so the Easter Bunny can hide toys and candy in them. Instead I found a plastic egg from my daughter’s kitchen playset (don’t tell her, she doesn’t know). Jackpot!

As you’d expect of childhood-grade fake food, the egg was made out of the world’s finest cheap, crappy plastic that is almost impossible to paint. However, I figured the paint job only needed to last for one shot, so I attacked it with spray cans: a base of black primer, then several coats of metallic.

Setting up the shot

The shot itself was a basic setup. I put my Hot Toys 12-inch Deadpool figure in a gun shooting pose. I then jammed a stick up the egg bullet’s backside, mounted it on an alligator clip attached to a goose neck, which was itself mounted on a Platypod.

After that it was just a matter of framing the shot and clicking the shutter.

In post production all I did was add a motion blur to the bullet, and toss in some muzzle flash and gunpowder smoke.

This is the finished piece.

I am glad I made my own bullet prop for this shot. There is something satisfying about solving a problem by myself, and looked more realistic than if I had used a stock bullet image.