Deadpool has become one of my most favourite characters, both on screen and in front of my camera.  The character will do anything, say anything, and switch from ultra violent to ultra caring in the blink of an eye. All with a quick wit and highly sarcastic send of humour that tickles my fancy. So when I had the chance to pick up a movie accurate Deadpool figure from Hot Toys, I jumped at the chance. Cashed in my allowance, and ordering it as quickly as I could.

When it finally arrived I couldn’t wait to open it, and put it in front of my camera.  Spoiler alert – it is an amazing figure.  However at $250 USD it is rather expensive, and  not without its flaws.  So I decided to write a review from the perspective of a toy photographer.

The figure is a 1/6 scale, and stands about 12 inches high.  It is movie accurate for Deadpool 2, and it feels like having Ryan Reynolds at my beck and call.  It comes with a whole lot of accessories.  I would even say a plethora. 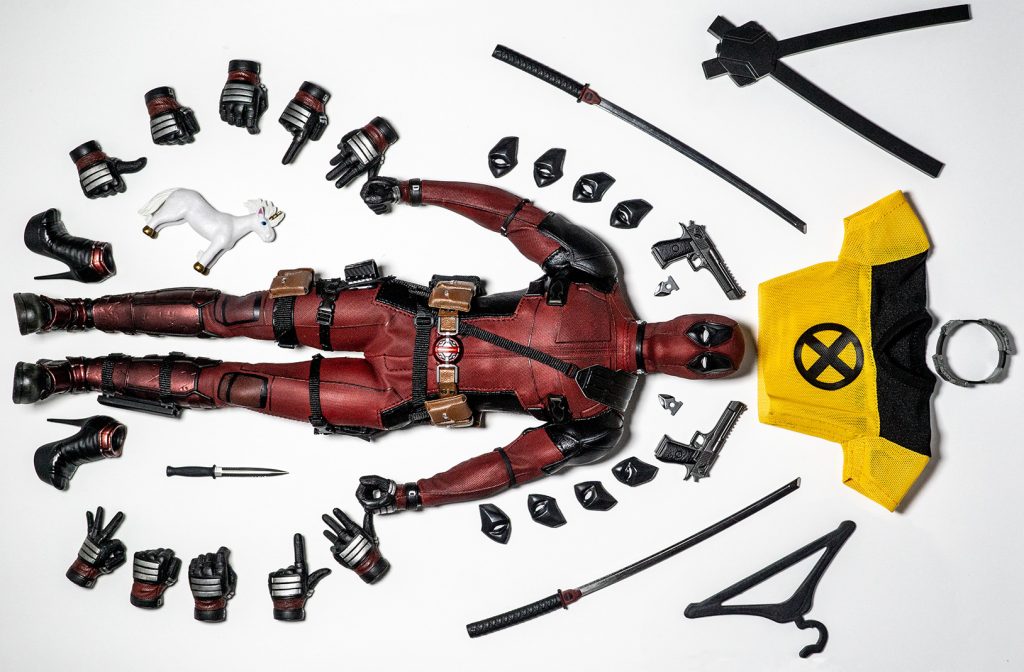 Deadpool and his plethora of accessories

As you can see he comes with twelve hands, 6 for each side, including fists, sword holding, gun holding, open hand, an OK sign, finger-guns, a pointing finger, and a thumbs up hand.  It also includes 5 sets of eyes in different levels of squint.

Also included are some movie specific props like the mutant power inhibiting collar, the X-Men trainee jersey (and hanger), and a white unicorn doll.  To me the best touch was the high heel boots, as a nod to the music video for Ashes by Celine Dion.

In the box, but not pictured, is a cardboard backdrop and a nice display stand. 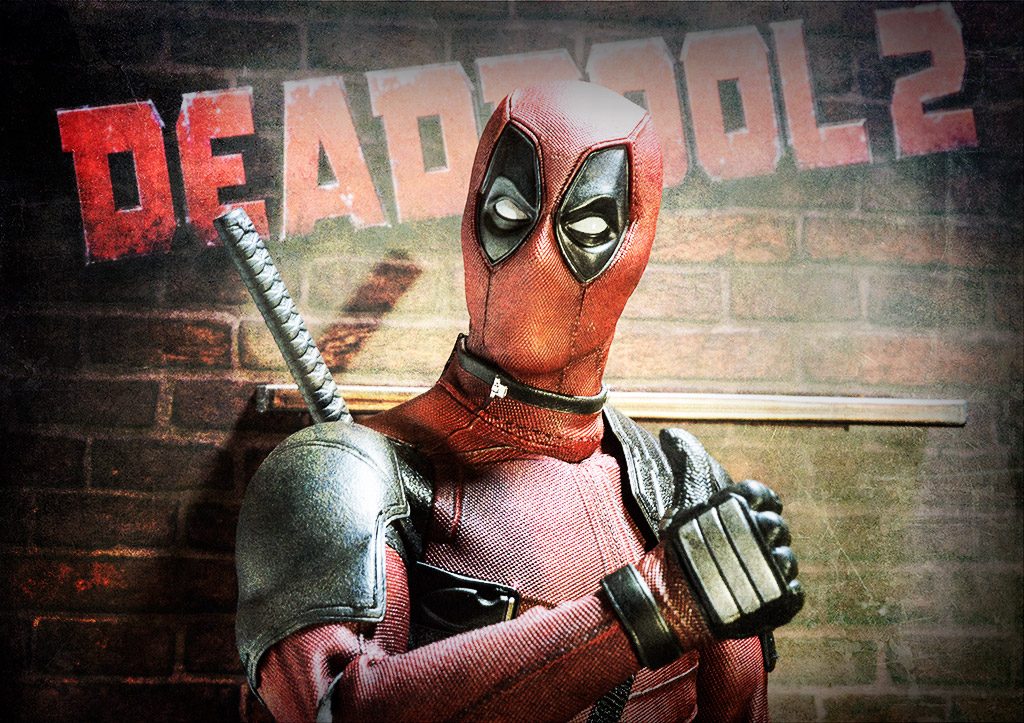 Deadpool in front of the cardboard backdrop

There are some really nice features with this figure.  The most striking is that the suit is made out of material, not plastic.  It is a proper suit, and as such there are no joints visible.  This is a super handy feature for us toy photographers who like to remove the joints of action figures in post.

Another awesome feature is the removable eyes.  They allow the ability to chance Deadpool’s expression, which makes the figure much more versatile.  Each eye is held on by a magnet, so changing them is quick and easy.  The katana sheath is also held on via magnet, which makes them super easy to change out, depending on the requirements of the scene.

The weapons are made of metal.  Yep, actual sturdy, non-flexible metal.  So gone are the days of unprotected weapons getting turned into pretzels at the bottom of camera bags.  The katanas are not sharp, but quite sturdy.  The guns are also metal, and the slides actually move back and forth.

This figure has a lot of good qualities.  As mentioned before the suit is actual material, so no visible joints.  The detail in the suit is also very detailed.  the head sculpt is perfect, and looks exactly like the movies.

With over 30 points of articulation, the figure is very flexible. The arms can be put into almost any natural position. The legs can almost do the splits sideways, and can be put into a seated position and almost any kicking position.   The waist twists a great deal as well, limited by the fabric of the suit, but more than enough for realistic poses.

The head also moves, rotating 360 degrees, and can move up and down, tho not as much as I would like,

This figure does have a few flaws that make it a bit annoying as a toy photographer.  The first being that the figure is hard to stand up on its own.  Most action figures I’ve come across have a stance that is stable when in a standing position, and using wires for support is only required for action poses.  However this Deadpool makes it hard to find that position, so using wires or other supports is going to be the norm.

Part of this instability is the ankles. They are flexible, but tend to not have the strength to keep the weight of the figure upright.

The hands are held on by a plastic stud.  This stud tends to get stuck in the hand section, and is hard to remove.  There is only one set of studs, so it has to be removed from both the hand and the arm to switch hands.  It would have been nice for that stud to be permanently attached to the hand, so one didn’t have to futz with the stud to swap hands around.

Finally, while the guns are really well made, the holsters are not.  They are a bit loose, so the guns fall out easily while posing the figure.  Many shots I’ve attempted have been thwarted due to the gun missing from the holster.  One will need to keep a close eye on them, especially if the figure is taken out into the field (and this figure is crying out to be taken out into the field). 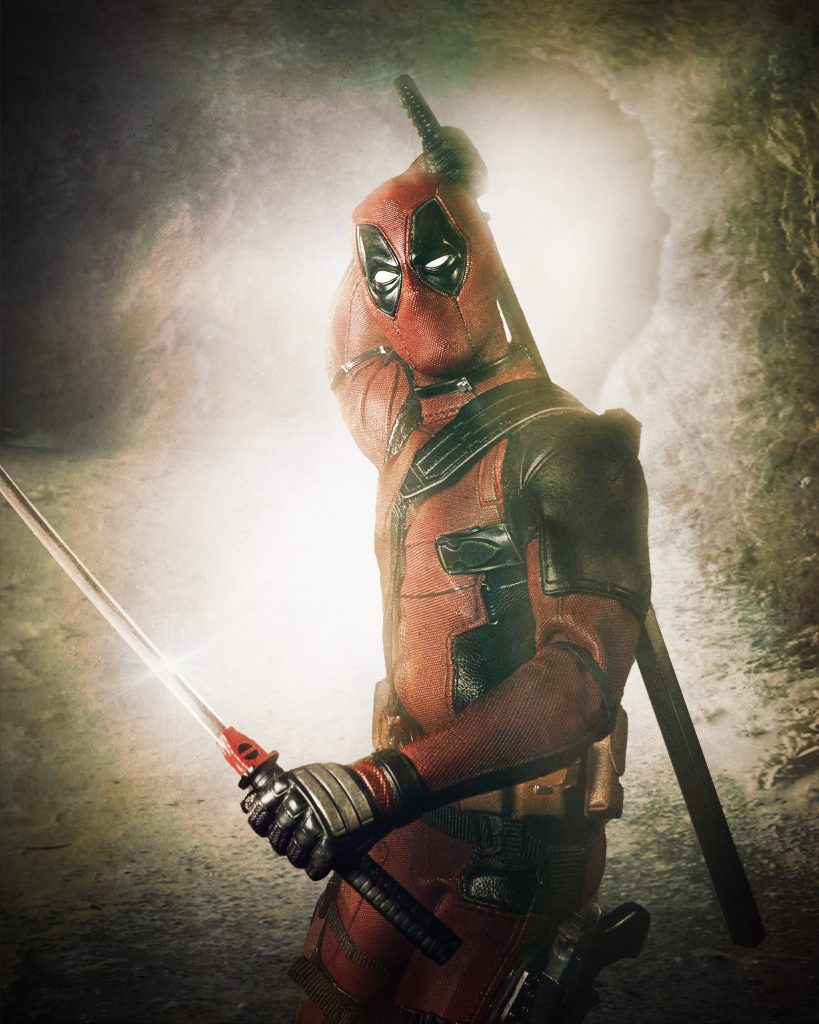 Deadpool getting ready for action in a cave.

There are a couple characteristics of this figure that are not really good or bad, but are a bit annoying to deal with as a toy photographer.  First is that the head can be tilted farther than it naturally sits.  For example if the head is pushed with my figure in a “cocked to the side” pose, it snaps back to a more upright position when the pressure is off.  It would be nice of the head would stay where it was positioned.

Second is that the suit, while highly detailed and gorgeous, doesn’t flex the same as the real one in the movies.  This means one has to pay attention to suit creases as well as realistic posing.  This adds to the mental load of the shoot, however the trade off is a gorgeous shot in camera. 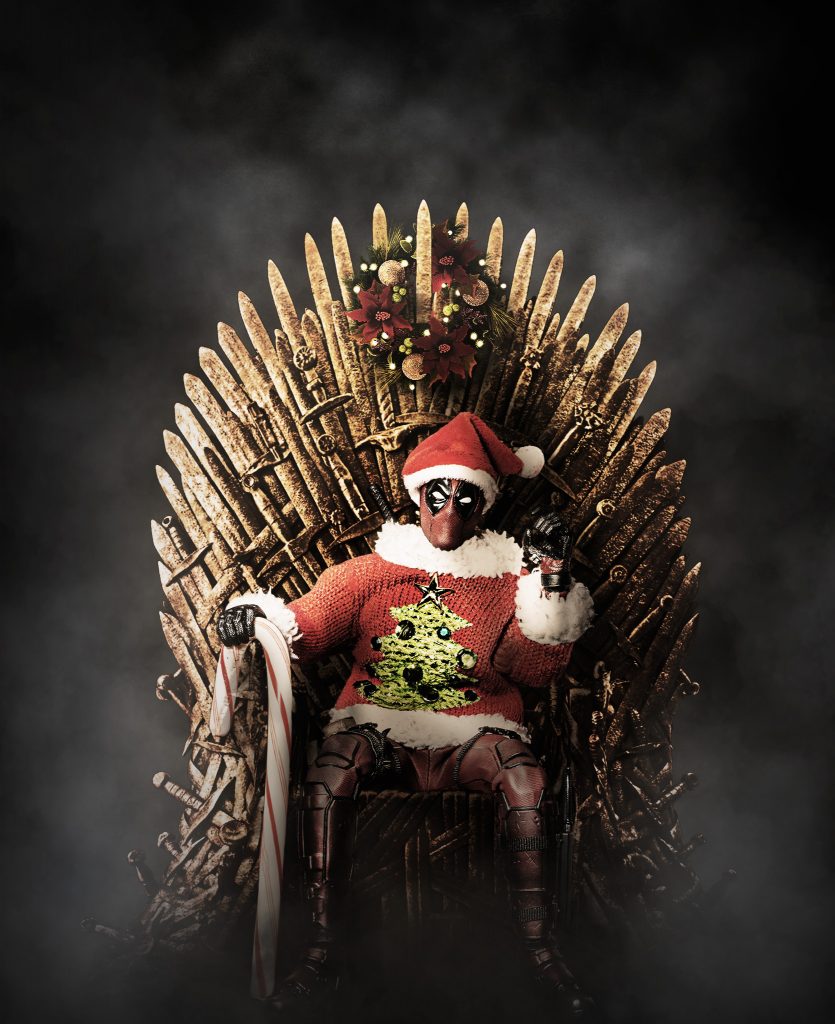 Deadpool, sitting on the Iron Throne, wishes you a happy holidays.

I am more than pleased with this figure.  While it does have some flaws, it more than makes up for them with stunning details, and an incredible amount of options in terms of facial expression, hand types, and other accessories.

The photographic possibilities of this figure are almost endless, and when it is not in front of the camera, it looks absolutely awesome on the shelf.  This is a figure that its meant to be a centerpiece of ones collection.

This is an expensive figure, but it is well worth the money. High quality, well built, and a dream to shoot.  It should be a must-have for any toy photographer who is also a Deadpool fan.  It really makes the chimichangas,

Want more toy photography goodness? Subscribe to our weekly email round up so that you never miss a post.  You can also listen to episodes of the podcast!  Either way, have a safe and happy holidays!