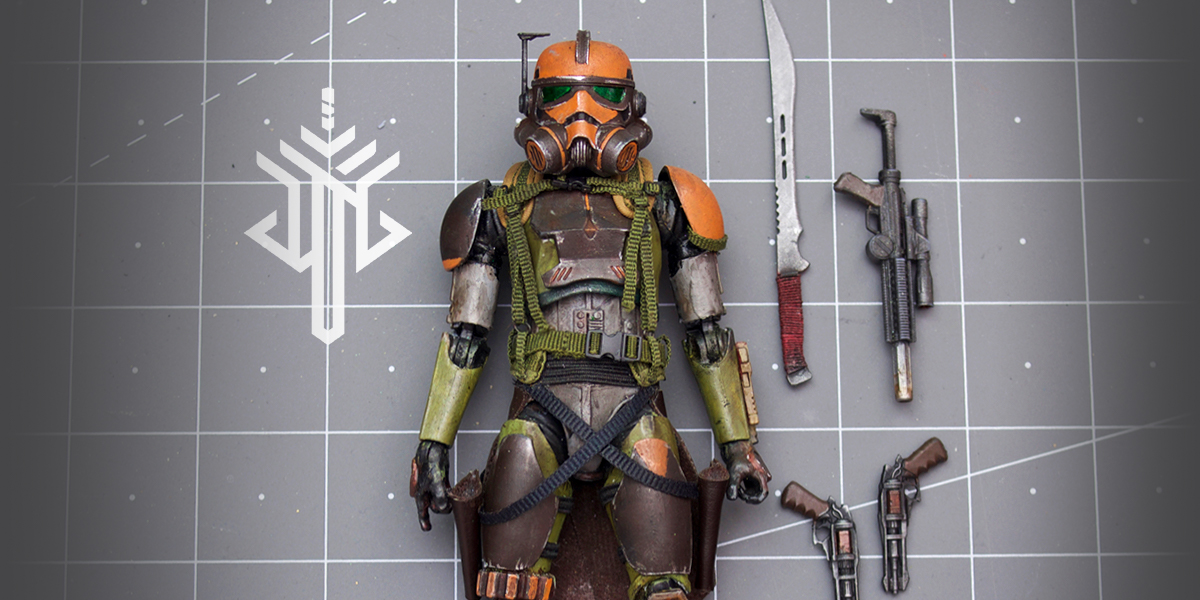 When you’ve been scrolling through toy photographers on Instagram for a few years, sometimes it all starts to look the same. The same action figures, the same action scenes, the same clever cinematic effects, the same dramatic lighting. Though I never really tire of the endless variations on the same themes, there’s a special spark that happens when I see something fresh.

I really don’t want to sound negative about using characters out of the box. I do it all the time, and it’s a lot of fun. But after a while I started feeling like there could be more. And when I saw the customization work on the DTG Figures account (@dtg_figures), it ignited fresh excitement about what is possible with these simple, jointed plastic figures. His work reminded me that I don’t have to settle for telling the same old stories with the same old characters. And if this resonates with you, I hope you’ll be as inspired as I am by this conversation.

Dean, the founder and owner of DTG Figures, began as a toy photographer, and now makes custom action figures on a commission basis. Starting with customizing via silicone molds, resin casting, repainting and a bit of sewing for soft goods, Dean is now focusing on new designs and original figures using 3D modeling, resin printing and even more sewing to bring to life new characters and ideas.

Where do you come up with ideas for new custom characters?

I spend a lot of time looking at concept art, which usually helps to spark the initial idea. Then I take that small idea, and run with it. I typically end up just feeling my way through a custom as I go. I don’t really create sketches or keep notes or anything. Everything is developed as I go.

I recently came across some ARC trooper concept art and since I’ve always been a fan of the idea of ARC (Advanced Recon Commando) troopers, I wanted to see what I could come up with. I like the angles of traditional stormtrooper armor more than other troopers, so I decided to use a stormtrooper as my base figure.

This sparked the idea for a new series I’m working on—the StormArcs. They’re basically just a hybrid of a stormtrooper and clone ARC trooper! I’m borrowing ideas from the ARC trooper’s additional armor and designing my own pieces to blend well with the classic stormtrooper armor.

What tools, materials and vendors do you recommend for customizing action figures?

There are a lot of tools that one can use to create a custom figure. A single paint brush and just a few colors of paint can go a long way. I’m often asked, “What paint do you use?” Really, there isn’t a perfect “one paint to rule them all” option out there. I use a multitude of paints including Vallejo, Citadel, Tamiya, Rustoleum and a few other smaller brands when detailing a figure. The best advice I can give in terms of paint is to try a few different options and see which you like best, as they all apply slightly differently and can be used to achieve different finishes.

As far as my top tool goes, it’s definitely Rhino 3D. Rhino is a CAD program that allows me to digitally design most of the extra parts I utilize for my figures!

When it comes to fabricating these designs, I use an FDM printer to create prototype pieces where I can judge overall design and fit. After I settle on a prototype piece, I use a resin printer to get high quality pieces. At this point, everything except for the base figure is fabricated in-house!

Maybe someday I’ll make my own base figures to use as well. In the meantime, I have a website where I sell most of the pieces I have designed. The long term goal of the site is to be a one-stop shop where customizers and enthusiasts can get armor upgrades, weapons, soft goods, accessories and even some one-of-a-kind figures and vehicles for their collection/photography.

Which custom figures get the most response from your followers?

Anything Star Wars related always seems to do really well! That being said, I am finding myself less drawn to Star Wars of late, and I’ve been leaning more toward random cyberpunk designs. I’m hoping that with the upcoming release of the Cyberpunk 2077 video game and other various cyberpunk-related media, I’ll see a shift in people’s interests and be able to make cyberpunk customs a more sustainable, social media-friendly option!

Which do you enjoy more: customizing or taking photos of your custom works?

Definitely the customizing process! I started out as a toy photographer, but I always felt like something was missing. I wanted the figures I was shooting to be more than they were, so I started making my own. My passion for customizing really took off from there. I rarely take photos of my customs these days outside of WIPs or 360s. I’d like to get back into taking more elaborate photos, but for now I’m just focused on creating as much I can.

Do you keep all your customs or sell them? What about commissions?

Most of the customs I build are actually for commissions. I sell most of what I make, though I do keep some original concepts to reflect back on. I like for other people to be able to enjoy my work as much as I do! My commissions are currently closed while I catch up on existing orders, but my commission window will most likely open again in a few months! It doesn’t stay open for very long though, so get in while you can if you’re interested!

Thanks, Dean, for taking the time to share your world of customizing with our readers!

You can check out more of Dean’s fantastic work at the DTG Figures website or @dtgfigures on Instagram.

A talespinner at heart, I'm a believer in willing suspension of disbelief. Toy photography is an invitation to enter into an alternate reality, one shaped and shaded by the eye and heart of the photographer. Come discover the worlds that exist through my lens!
View all posts by Teddi Deppner →