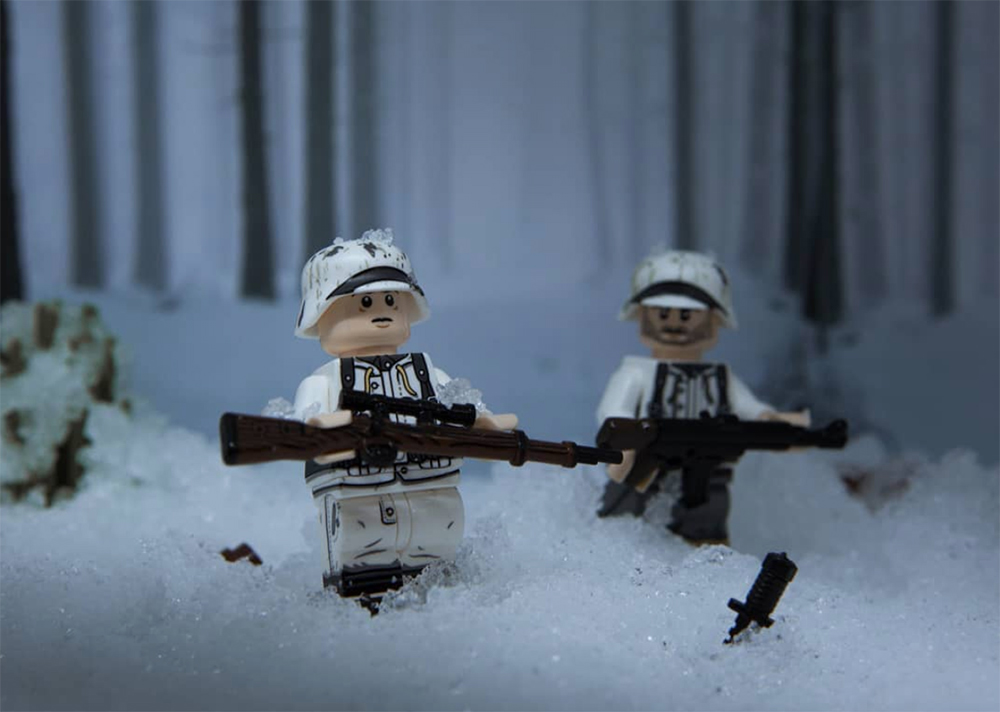 I haven’t always been a toy photographer—I’ve been keen on photography for about seven years now and I am currently studying a BA in Photography at Ulster University. I first dabbled in LEGO photography when I was about 11 years old (I’m now 21). I used to have a LEGO YouTube channel where I’d show videos I filmed with a terrible old Sony Handycam and couldn’t get anything better than 360p. For taking pictures I would pick up the family-owned Kodak point and shoot digital camera and use it to capture the scenes I made with my LEGO City sets. Unfortunately I no longer have my earliest LEGO photos.

So why did I start?

Back in early 2018, my love for LEGO was reignited after a conversation with my boyfriend made me realise I actually really missed collecting. I returned to the hobby by getting some Star Wars sets (mainly for the minifigures) and decided to go to a nearby beach and take some Tatooine-like photos.

In March 2019, for my A-Level Moving Image Arts film, I made a LEGO stop-motion animation about a man who wants to play professional baseball but has to build an invention to help him practice. It was a silly little stop-motion, but it got me an A for my final grade in the film module.

Fast forward to November/December of 2019, I was doing a module called Staged Photography, in which I was to stage and shoot two different series of six images. For one set of six I took portraits of six students from another local college, the Belfast Bible College. As for the second set, I choose to do LEGO war photography. I really surprised my lecturers with the contrast between the two projects.

For my final semester of first year, I was due to make a digital photobook revolving around the city. Unfortunately, due to the global pandemic, my classmates and I were absolutely stuck, so we were given the chance to make the book based on anything we could do from home. I went back to LEGO war photography since it was something I’d explored before, and I knew I would be able to improve in the given timeframe. Following the parameters from my course lecturers, I had to do a story-based photobook, making my photographs follow a sequence and tell a story through the images. I did this very loosely, and thinking back to the idea now, I like to just pretend it wasn’t really a story at all, and instead think of it as a collection of war-related photos.

The photobook assignment was finished in mid-May and by that point, my images had gained some attention on Instagram. I now had a number of LEGO war enthusiast followers and was starting to find myself digging deeper into the community. I was seeing less of the photography I was used to, and my feed was about 80% LEGO.

LEGO does not actually release war-themed sets themselves, so this was already an odd choice of mine and I’m not even sure why I decided to do it. I had some figures around from when I was younger, which were a good fit for war-themed images. For example, the Germans from the Indiana Jones line and some Endor Rebel troopers from Star Wars had cool green camo torsos. Throw in some Brickarms I had lying around from when I was 12 and making a Call of Duty Nazi zombie map in LEGO, and I had enough to do the first round of images.

Due to the research into war photography I carried out as part of my portfolio for University,  I was reading a lot of war books and watching movies for inspiration. I loved Robert Capa‘s war images so much, and I just really wanted to make cool photos from there, so I went down the LEGO war photography route for a second time.

Deciding to release a zine

I continued to take LEGO photos all the way up to July when I decided to begin selling my work after being encouraged by friends and family. I’d never sold my photos before, so this was a big leap for me. I designed the zine myself using Lightroom and already had a rough idea on the layout based on the project I had completed at uni two months prior. I added newer photos and reorganised the pages, and finished the zine, sending it to print in mid-July.

I received the copies of my zine less than a week later. The feeling of holding a physical book of my work made me feel incredible—I couldn’t wait to reveal it to the public. I released the zine on July 31 via my new Etsy shop page (Thea Birch Photography) and teased it on Instagram. I’m so happy with the reception it received.

My photography has improved, and having one collection all in one neat little book is a good way to review my work. I do feel great knowing my pictures are out there for people to see, and even if one person enjoys it, all the effort is worthwhile.