I (Teddi) have been following Jon Black’s work for a while on Instagram. As a fellow fan of The Mandalorian, I was delighted to see somebody with an eye for accuracy and an artist’s touch making top-notch customs of so many of the characters that haven’t made it onto Hasbro’s Star Wars the Black Series release list yet (and they may never get there, which makes the work he’s doing all the more precious).

Jon generously shares his knowledge on various platforms already, but in case anybody in our community has missed out, I invited him to join us here for a little interview. Thank you for taking the time to share with the Toy Photographers readership, Jon!

How did you get started with customizing action figures?

The very first custom figure I made was Bespin C-3PO. I really didn’t plan to get into customizing at the time, I just wanted that figure for my collection. I believe that was in August of 2018. I had seen a few guys make him and thought I could probably do that. Up until that point, the idea of taking a figure apart was blasphemy! I really enjoyed the research into making him look correct and the process of building him.

It wasn’t until April of 2019 that I really say I got into customizing. I make a living in video production, animation and photography, so I’m always creative, but it’s all digital. As an artist, that drains you. It’s not easy to always create stuff, and I needed a hobby that was creative but hands-on. That’s when I decided I was going to do customizing as a hobby.

I really wanted a Solo movie Darth Maul for my collection, as well as a few other characters.

Hasbro wasn’t making figures fast enough for me, and after Solo didn’t do so well at the box office I figured they wouldn’t make that character. My Maul has gone through a LOT of revisions over the year as my abilities got better. His legs, feet and soft goods have all changed since I first finished him.

When you decide to make a custom figure, what is your process? Can you walk us through the steps?

RESEARCH THE CHARACTER AND OTHERS’ CUSTOMS OF IT

I start with researching a character as much as possible so I can be as accurate as I can be. When making a known character, half the fun for me is this research. I grab every photo of the character I can find off the web and store it in a folder on my phone. Then I watch as many scenes as possible of them and literally take photos of my tv screen of the character in every possible angle. I add the photos I take to the same folder so it’s all easy to access while I make my custom.

The fun comes in finding little details no one notices or backstories I didn’t know. Benthic “Two Tubes” is a great example of this. He looked different in photos, and through research I realized he has a brother Edrio. So it wasn’t that he was looking different in photos… there were two of them.

Also, one of the photos I found was an image of the costume on display… the display was wrong and included his costume with elements from his brother’s costume. I really enjoy figuring that stuff out. Lastly there are just a few frames of Benthic in Rogue One that shows his back clearly. In those frames is a small backpack that I had yet to see anyone include in a custom of the character. Those little things are golden to me.

Then I see how others have made a custom, or if anyone has [made one] yet. I see what I think works and what doesn’t for what I want to do.

From there I start looking for parts that I will use to make my figure. Starting with the base figure and headsculpt.

The head sculpt I try to get from some of the great casting and 3D printing friends I have online. Outer Rim Traders, Wattos Scrapyard and Two Suns Six Inch Customs are some of the guys I use. They provide great sculpts that you have to paint yourself.

For the body I use for the base I always try to consider the height of the character as well as the look. Burg from The Mandalorian is a great example. Clancy Brown, the actor who plays him is six-three (6’3″). Benicio del Toro who plays DJ in The Last Jedi is six-two (6’2″). So, when making Burg, I used a DJ figure as a base.

Once the head and body are figured out, I use an app called Layout to compare the character photos to my build. It allows me to combine a photo I take of my figure and the character into one image side by side, making it easier to see what is correct and what it wrong. I do this throughout the build to help guide me.

Where do you get the materials and sculpts you need for specific creations?

The sculpts come from places like Outer Rim Traders, Wattos Scrapyard, and Two Suns Customs. Sometimes friends with 3D printers hook me up with parts, like Maul’s saber hilt.

The figures I try to get on sale or at a discount to keep the hard costs down. I search Amazon “Star Wars Black Series” and filter it by cost to help me find them.

Brushes I always get from Hobby Lobby or even Walmart, though I have recently had issues with some of the Walmart brushes. I do have one brush I spend extra money on for detail work.

I use Citadel and Vallejo paints. Usually I go to a local game store to get paints, but on occasion, when I need a specific color, I order them through Amazon.

I recently started using Green Stuff to sculpt parts. I’m a BIG FAN now of that stuff, but a noob. I have so much to learn about sculpting.

Of all the materials, paints and tools you’ve collected while customizing, what are your top must-have items?

For anyone starting out I would say my must-haves are:

What are your top tips for someone who wants to customize their own action figures?

Where do you get your inspiration for what to create?

At the moment The Mandalorian series on Disney+ is the source for most of my inspiration. It has so many new characters to make and I know Hasbro will probably not release many of them any time soon—and I want them in my collection NOW!

I think The Mandalorian stuff is what I’m known for, but I do on occasion make a character up for the fun of it. RUST is a bounty hunter I made that was in all honesty what I call a test figure. At times I want to learn new painting techniques or customizing ideas, and I make a figure for that purpose alone. RUST was made because I wanted to teach myself how to paint rust realistically. He has ended up one of my most popular characters.

As for other sources of inspiration…

I’m actually working on a figure now that I was inspired to do by watching (of all things) Outlander with my fiancée. (Yes, I know that’s a romance novel turned tv series. I’m a diverse and complicated person.) Outlander has these great Scottish Highlander costumes that inspire me. Obviously the figure won’t be a Scottish Highlander in space. Just elements inspire me.

Do you do commissions?

Simple answer is no. Not at the moment.

Long answer is I have considered it, but there are two things keeping me from doing it. First, it’s a hobby I really enjoy. I make a living from being creative, and I don’t think orders and deadlines in my hobby would be much fun. Secondly, I’m a noob and my hard costs are too high to sell a figure at a reasonable price because I pull from so many sources.

Who are some of your favorite customizers?

That would be impossible to say. I am inspired literally by probably over 100 different people, if not more. My favorite Facebook group: “Star Wars: A Custom 1:12 Galaxy, is full of amazing artists that inspire me.

Which of your creations is your very favorite, and why?

That’s hard to say. Probably Kuiil. I really loved that character in the show, and the process I used to make him was a unique one for me. I had never tried to shorten a figure before, but I think it worked well. I was also surprised to find out how tall he is. Kuiil is 4’9” and Mando is 6-foot. That’s the same size as my fiancée and me. I thought he would be shorter. 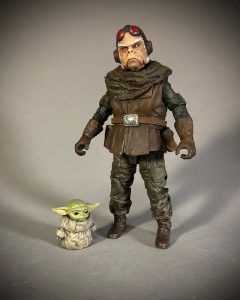 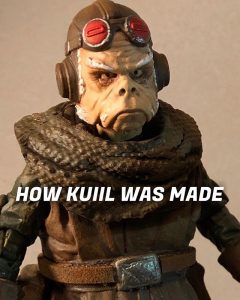 I especially admire your Mandalorian characters from “The Prisoner” episode. What prompted you to do those? Do you plan to make others from that episode?

I plan to make all of them! Even Ranzar, the bearded guy who hires Mando.

I think once I made Mayfeld I was locked in. You can’t have just one of those characters. You need them ALL! I have plans for each of them in the works. With Mayfield, Zero and Burg made, I will be moving on to Xi’an next and then her brother Qin. Lastly I’ll do Ranzar, who I have a plan for, but I need to think a few more things out before I start on him. 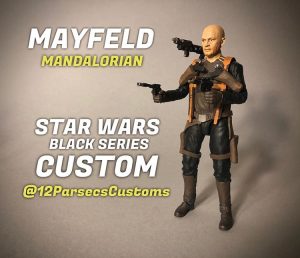 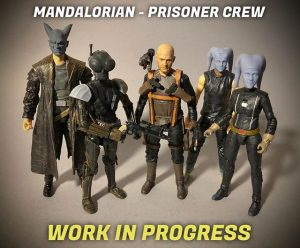 I really enjoyed Episode 5 “The Gunslinger,” too. I know a few people didn’t, but I thought it had some great characters. Toro Calican, Fennec Shand and even Peli Motto were great. I have made Toro and Fennec, and will make Peli Motto after I finish “The Prisoner” episode characters.

My goal with my Instagram page is to share my work of course, but to also help grow the customizing community by sharing what I learn and the processes I use to create my customs. It’s such a rewarding hobby.

Now I better get back to customizing. I have a lot of characters to make before Season 2 of The Mandalorian comes out and adds a bunch of new characters to my list.

Thank you for talking to me and showing interest in my customs!

Thanks again, Jon, for sharing with the Toy Photographers community!

If you have any questions or thoughts for Jon Black, please drop them in the comments below!