In 1999, after graduating college, Joel Boblit began selling toys full time before looking for a “real job”. By the end of summer, he had amassed a small storage unit worth of inventory and had shipped thousands of figures out. Joel spent the next 3 months buying and selling on eBay and then decided he needed to expand and begin selling brand new items at retail. It was this decision in the fall of 1999 that led to the creation of BigBadToyStore with his brother Dan Boblit.

From 2000 to 2005 they greatly expanded their selection and infrastructure. During this time, their parents Lynn and Terry quit their jobs and came to work with them.

In 2003 they built a 12,000 square foot warehouse and began to hire outside employees.

In 2007 they doubled their warehouse to 24,000 square feet and then added on again in 2011, bringing the total square footage to 52,000 square feet. The warehouse is currently stuffed full of awesome items waiting to be added to collections.

“Small, flat-muzzled avians that flock about the rocks and roost in the cliffs of Luke Skywalker’s secluded island, Porgs are inquisitive creatures. These 6-inch-scale Porg figures are carefully detailed to look like the characters from Star Wars: The Last Jedi. Each 1-inch figure features premium detail and movie-inspired design.” 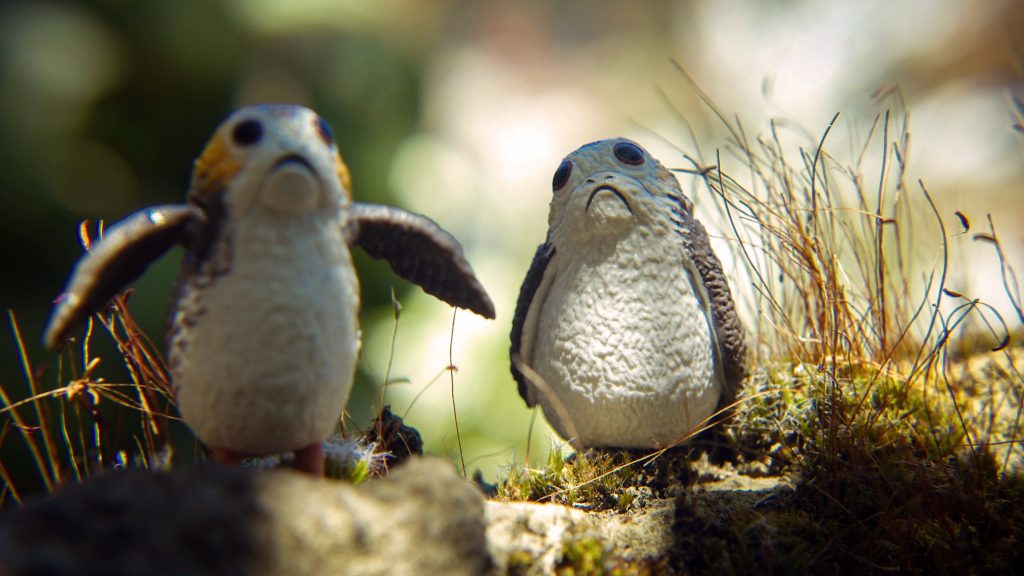 OK, I might be biased with my review of these Black Series Progs. These little guys are a joy to photograph! 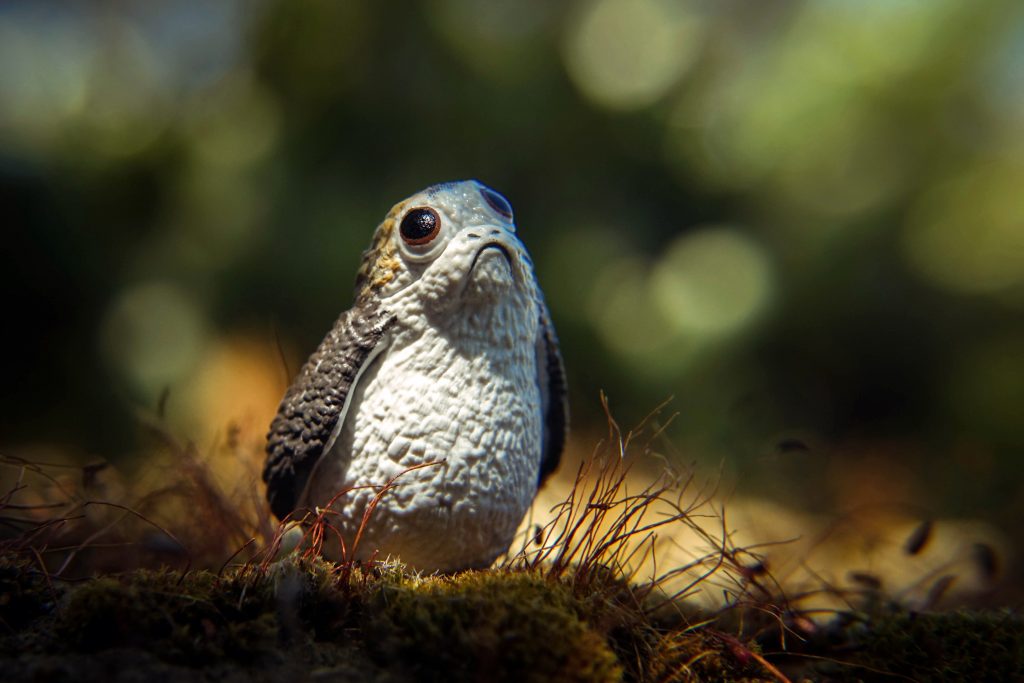 I first feel in love with photographing these little guys when I received a @krash_overrride custom Porg at the Oregon Toy Photo Safari. 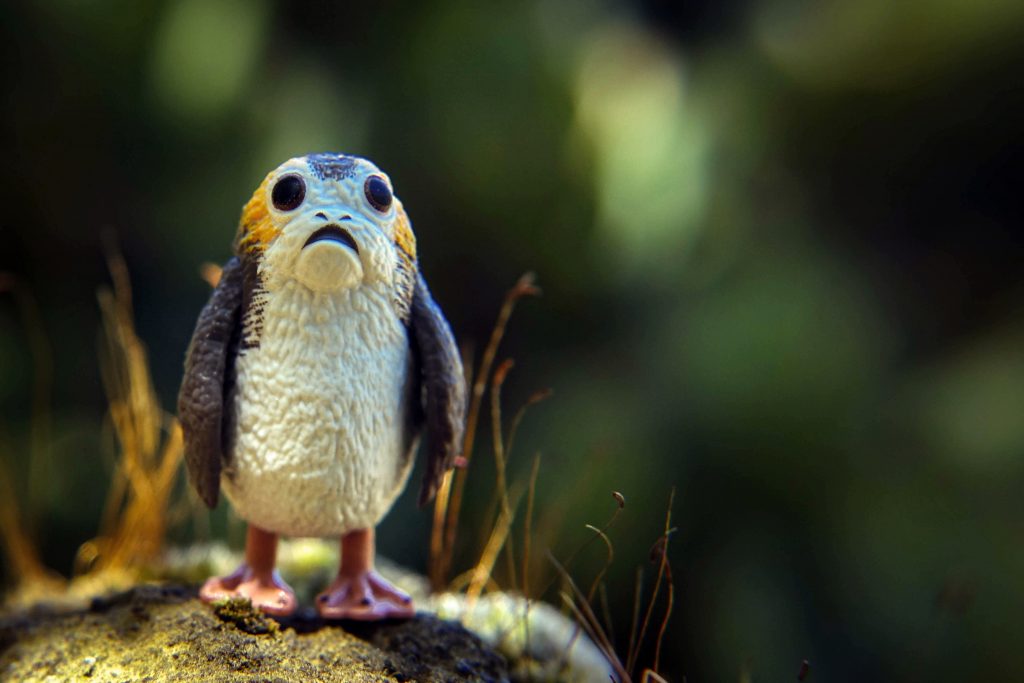 I wish I had duck feet!

There are two Porgs that come in the set, one sitting and one standing. The standing Porg has articulated wings. It might seem inconsequential, but the ability to move the wings can add so much to the emotion of this little avian. And the standing Porg also shows off its little duck feet. I wish I had duck feet! 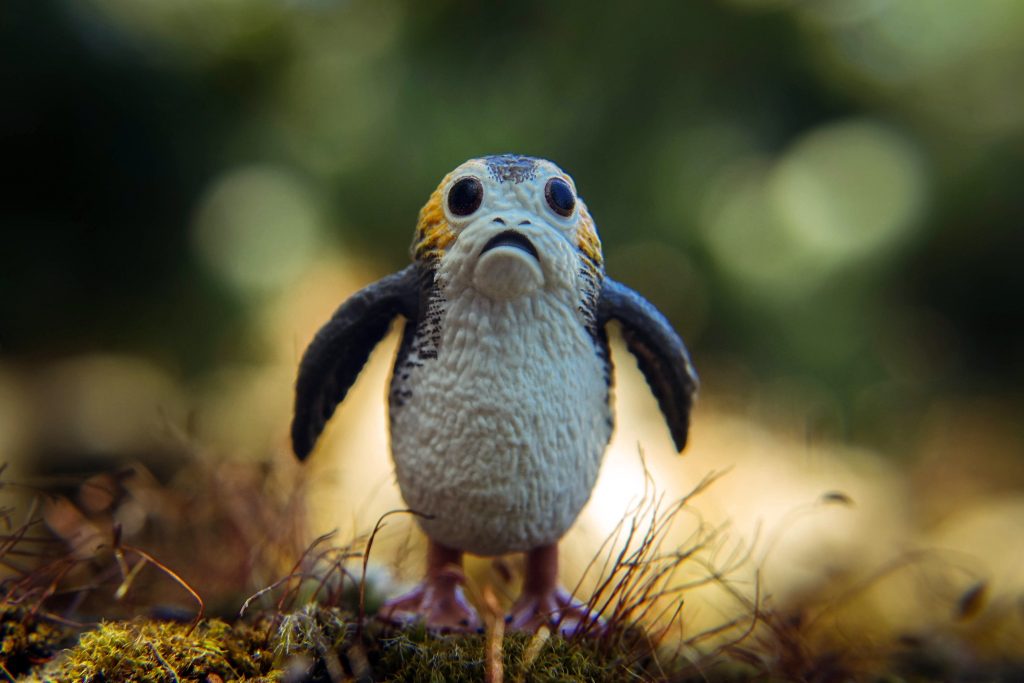 I believe I can fly.

Undoubtedly, these little guys will be with me on every toy photography outing. They take up very little space in toy box, but give so much!

“A reprogrammed Imperial security droid now loyal to the Alliance, K-2SO is an alarming sight standing within a secret Rebel base. The pragmatic droid is an effective insertion agent, as he can blend in perfectly at Imperial installations and outposts. Standing at 6-inches, this K-2SO replica droid figure from The Black Series features premium deco across multiple points of articulation and quality realism for iconic role play and ultimate collectability.” 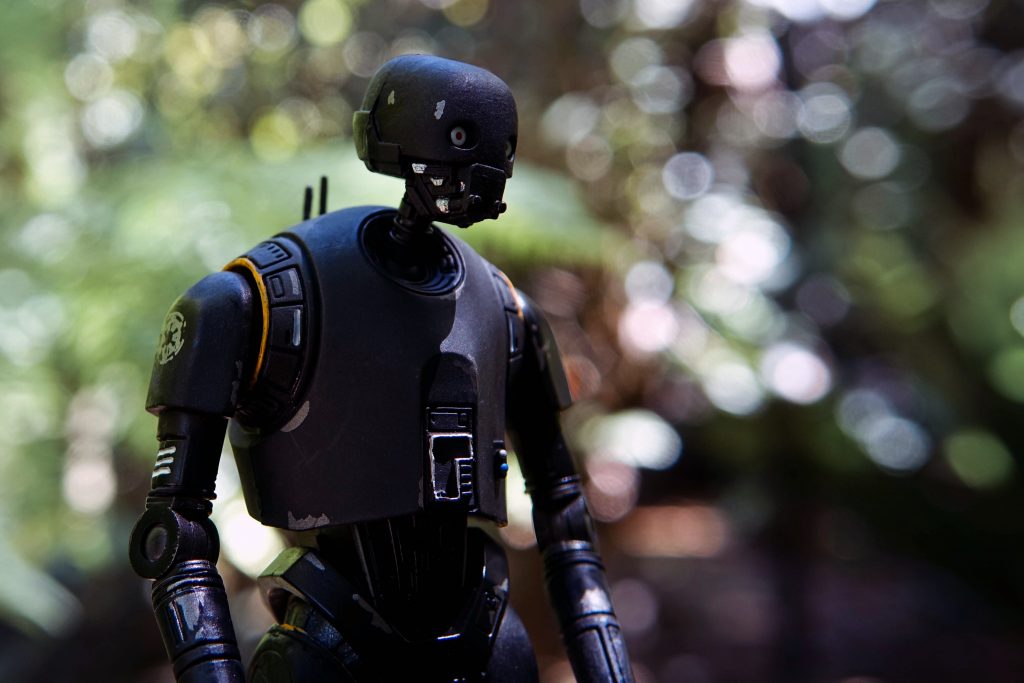 Who doesn’t love a droid? 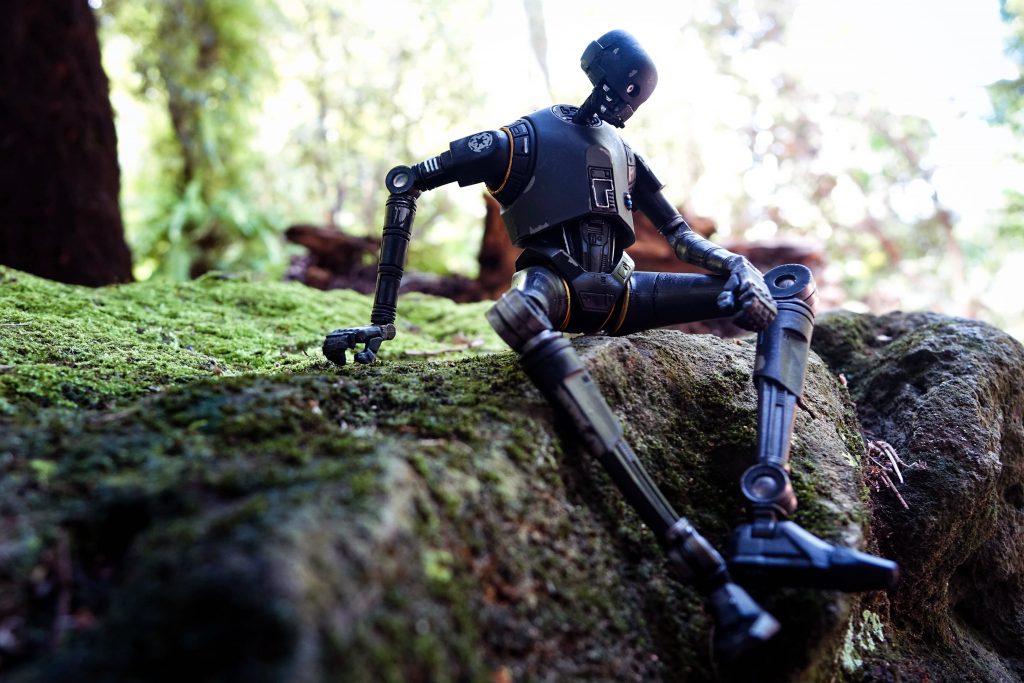 The Black Series K-2SO is super articulated! Lateral shoulder, hip and ankle movements, lower leg and ram rotations, neck and head movement. And the waist can be rotated and titled forward and laterally. I initially thought all that articulation on such a slender figure would’ve impacted on its sturdiness. Wrong! Sure, K-2SO is top heavy, but one he’s balanced, he’s golden. 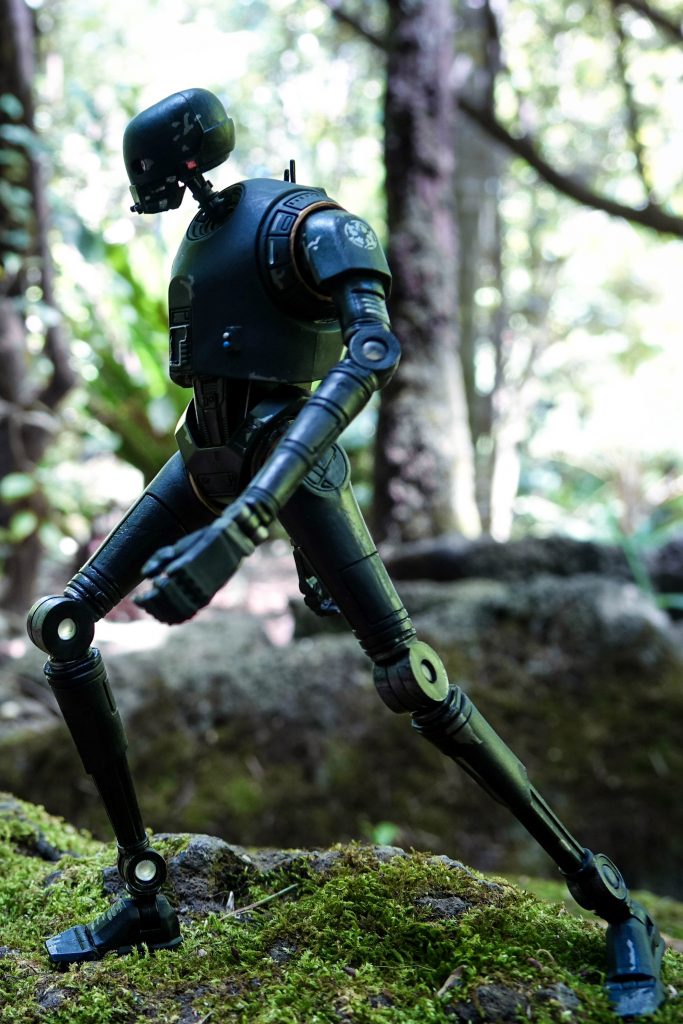 The matte finish is super cool for toy photography. It dulls reflections and glares, but gives enough of a hint to give a metallic feel. The worn metal paint detailing is a nice touch too, adding movie realism to K-2SO.

There’s something inertly emotive about a droid, and K-2SO is no exception. He’ll be sure to keep the Porgs company on my toy photography outings.

Big Bad Toy Store have given us an extra Star Wars Black Series K-2SO and Porg Two-Pack to giveaway! And winning is as easy as 1, 2, 3! All you have to do is: 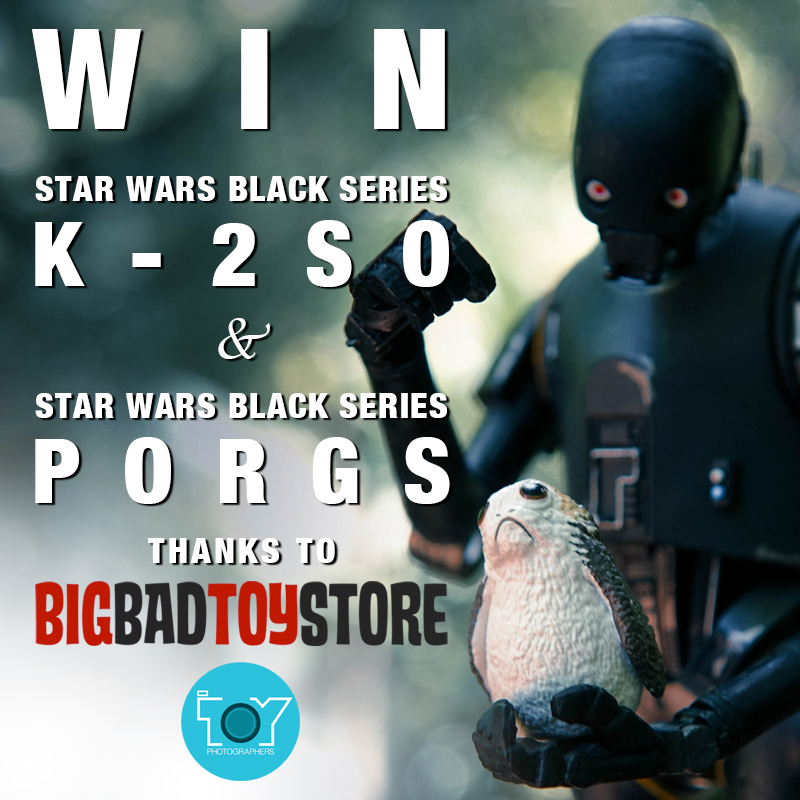 You can enter up to 5 times during the two weeks the giveaway is running.

The giveaway is open to entries worldwide!

A huge thanks goes to Big Bad Toy Store, especially Joel, for sending us these Black Series figures to review and giveaway. If you’re looking to add to your toy collection, jump on over the BBTS. They’re sure to have exactly what you’re looking for, or maybe something you didn’t know you wanted!