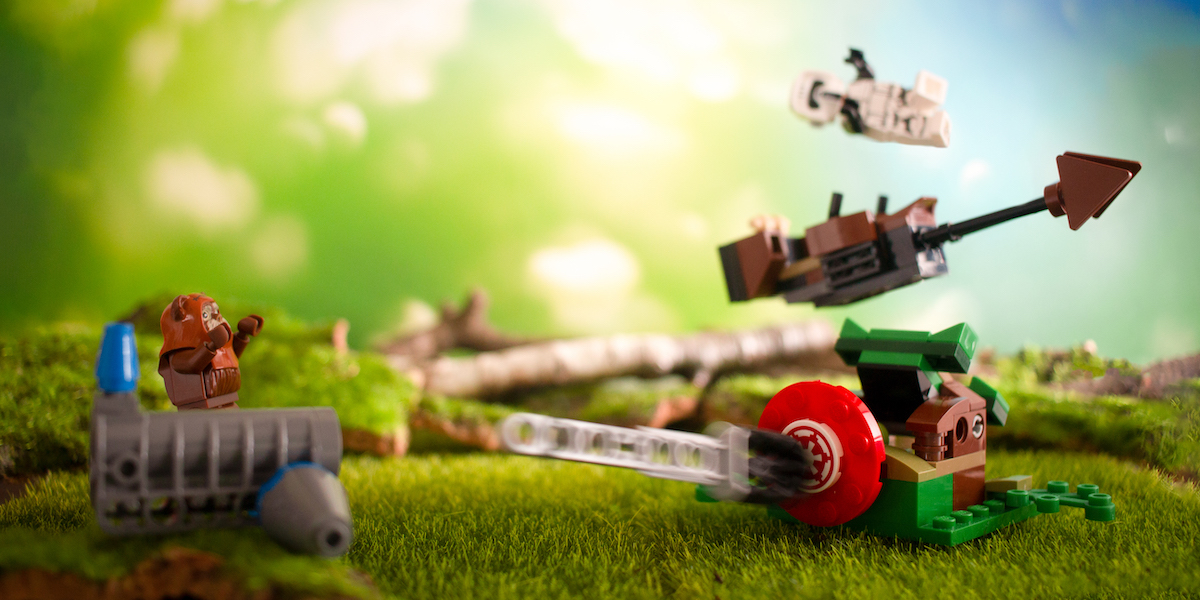 2019 has been a banner year for LEGO Star Wars, as the popular theme celebrates its 20-year anniversary. If I didn’t feel old before writing that sentence, I certainly do now!

At 10 years old, I was the prime age for Star Wars LEGO sets when they first arrived in 1999. Not only was my anticipation for The Phantom Menace at an all-time high, but I was already a huge LEGO fan—my room was covered in LEGO System kits featuring Johnny Thunder, space explorers, scuba divers, ninjas and race cars. Then the arrival of Star Wars minifigures and vehicles changed everything.

I was already playing with Star Wars action figures and having lightsaber fights with my brother in the backyard. But to have the Star Wars universe available to me in LEGO form was something else entirely. I think I had the best Christmas of my life that year—thanks Mom and Dad!

One of the first sets I remember getting was 7128, a simple $10, 93-piece set with Luke Skywalker and two scout troopers on speeder bikes. In fact, any shot I’ve ever taken of scouts has featured the exact same pair of minifigures. They have the fading torsos and helmet scratches to prove it!

It should come as no surprise then that the first set I wanted to get my hands on from this year’s wave of Star Wars sets was 75238, amusingly and redundantly titled Action Battle Endor Assault. It’s not an exact recreation of 7128 (technically it doesn’t have the 20th Anniversary banner), swapping Luke and the second scout for an Ewok and miniature treehouse. But in my head-canon it’s a spiritual successor to a seminal classic.

Right off the bat, there were several things about this kit that caught my attention: The updated scout trooper minifigure design, new speeder bike, Ewok minifigure (the first in my collection!) and LEGO’s new “Action Battle” playability elements.

This set clearly wasn’t designed for toy photography or even older LEGO fans. Instead, it’s for the kids who might enjoy using the red and blue projectile shooters to blast the scout and Ewok from their posts. Still, I was curious. Could a set designed for playability lend itself well to toy photography?

As you probably expected, the playability elements were the first to go once I started shooting. I always intended to immediately remove the red and blue targets, as they would be distracting in photos. But I love the circular tile pieces adorned with the Imperial and Rebel insignias. I can see them popping up in photos somewhere down the line.

While most photographers will likely pilfer this set for parts like I did, it was fun trying to capture a photo that shows off the playability rather than hides it.

The true stars of this set are, of course, the minifigures. You simply can’t beat the cuteness of a LEGO Ewok, and their iconography and size will make them popular additions to anyone’s camera bag.

I do have some reservations about the new scout trooper design, however.

In the last year, LEGO has debuted new designs for several of their Star Wars characters. Like the stormtrooper before it, the Scout has been completely overhauled with not only more detail on the torso and legs, but a more screen-accurate helmet.

Objectively, the helmet itself looks great—it has a slightly different mold and additional little details like the three vents above the visor, black coloring on the inside, and additional details on the nose piece and back of the helmet. The most notable change is the visor, which is no longer has a cutout allowing printing on the minifigure’s face to form the actual visor. Instead it’s been filled in with reflective black plastic.

As is the case with the updated stormtrooper helmets, I’m personally not a fan of the new screen-accurate design. It might be nostalgia, but I’m a fan of the simplicity of the old helmets, particularly the visor. I always thought it gave the minifigure a bit of charm. I also think they’ve gone a bit overboard on the leg details. They may be more accurate, but I find them a bit distracting in photos.

The torso, however, has been given a great overhaul, with printing on the front and back that shows off several details of the uniform that just weren’t possible to achieve in LEGO form two decades ago. I do wish that we could get some printing showing the white armor on the arms, instead of the all-black ones included here.

If I’m being honest, I’ll likely use the new torsos, swap out the arms for white, and keep my old helmets and legs.

It’s certainly not the new LEGO Ideas Treehouse, but I like the simple, cute interpretation of the Ewok’s little homestead. It acts as a nice object to set the scene. Just be careful not to bump the element near the base that sends the Ewok flying up top!

The Speeder bike is sparse on the details, but I found that refreshing compared to some of the clunkier designs LEGO has tried in the past. My only complaints are the lack of a real a seat (designed so the minifigure can fall off easily) and that it’s impossible for the scout to actually hold the handlebars.

Photographically, however, the speeder bike looks awesome and makes for a really fun prop! The build itself is pretty simple, so I was able to dig through my LEGO and create a couple more speeders to use in photos later.

Toy photographers have a knack for bending any kind of toys to their will, so of course anyone interested in Ewoks, scout troopers and speeder bikes will enjoy picking up this kit despite the focus on playability elements. Whether it’s worth the $29 USD price tag, however—as opposed to finding these pieces or minifigures somewhere else like BrickLink—is up to you.

Personally, I had a blast strolling down memory lane, checking out the updated scout trooper design, and finally adding an Ewok to my collection. I suspect many elements of this set will have a place in my toy photography for a long time to come.

Thank you to The LEGO Group for providing this set to review! Stay tuned for more reviews featuring LEGO Star Wars’ 20th anniversary.

What do you think of 75238 Action Battle Endor Assault? Have you picked up the set and photographed it yourself? I’d love to hear your thoughts in the comments below.

Don’t miss out on all the things happening at Toy Photographers by  Subscribing to our weekly email round up the podcast! Then continue the discussion in our awesome communities on MeWe and Flickr.