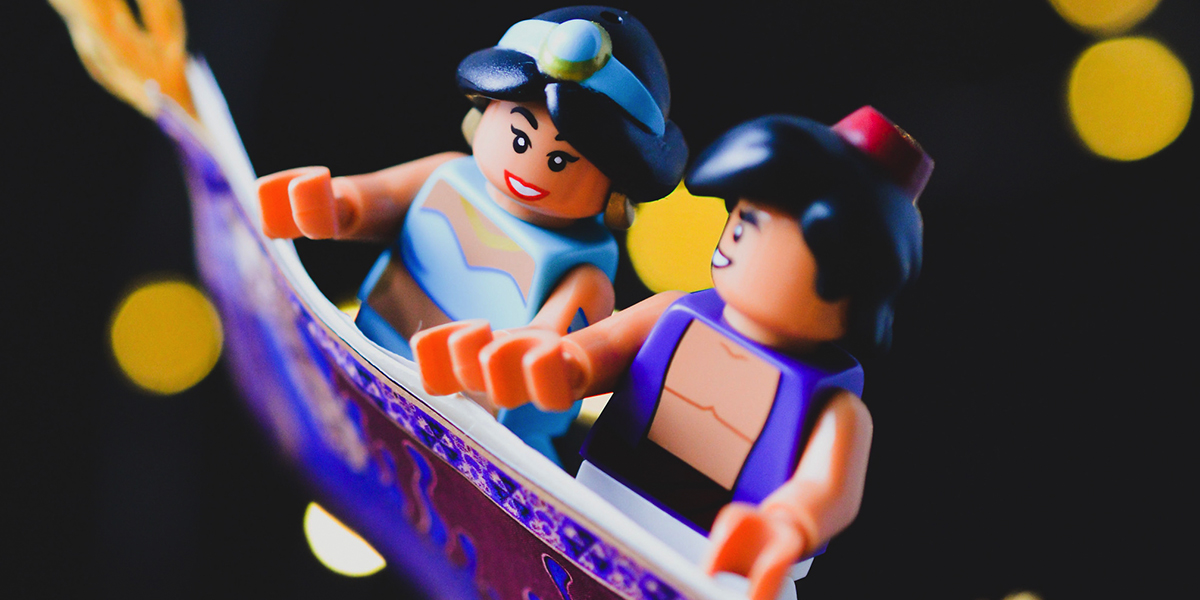 With some long awaited classic Disney characters included, I was eager to get my hands on Series 2 of the LEGO Disney minifigures.

I mean, with Jack and Sally from Nightmare Before Christmas, and the DuckTales gang, how was I ever going to resist this series? Luckily, I didn’t have to! The results of playing with this series of figures and my thoughts on them from a photographers perspective are below. This is a bit of a long post, with a few things to watch, so you might want to get a cup of tea before starting!

Let’s get looking at this set of figures so you can work out just which ones you want to add to your collection (if you know, you don’t want to get the whole lot!)

First up, we have a wonderful black and white Micky and Minnie Mouse. These are similar in design to the Steamboat Willie figures, but without the silver accents. The black and white really stands out wonderfully in colourful scenes, as well as in in black and white; perfect for a range of photos. Not featured here is Minnie’s adorable polkadot skirt in grey tones. Such a nice addition to the LEGO skirt range for those of us not into regular pink polkadots!

Growing up with early morning cartoons, DuckTales was a staple of TV time. In case you need a little reminder of what the original looked (and sounded) like, here’s the theme tune for you!

One box of minifigures only has two sets of these little ducklings so you will need to be quick to catch them. Each duck has a hat and body in their respective colours. They also all have cute, tiny duck butts.

The bright colours of these guys really pop in photos. I had them out exploring the garden and they look fab out and about! It would have been great if they had moving legs to add more flexibility and motion into scenes, but they are still a great set to have!

Looking after Huey, Dewey and Louie is Scrooge McDuck! This Scottish miser has trouble letting go of his pennies, even to tell the boys off! Scrooge comes with a fabulous top hat, a cane and two coins. Again, he has some brilliant, vibrant printing that really stands out in a photo.

If you didn’t grow up with Chip ‘n Dale, then I strongly suggest you get a bowl of cereal and settle in on the couch to watch some online. Here’s the intro of Rescue Rangers, my personal childhood Chip ‘n Dale experience!

Chip (dark brown) has smooth fur and a black nose whilst Dale (light brown) has a fluffy head and a bright red nose! Both have a printed tail on the back. Here they are stealing peanuts from the house and running away! These guys just express happiness and joy and were great fun to photograph!

Let it go, let it go, can’t hold it back anymore!

With Elsa and Anna, you’re sure to find yourself humming this most catchy of Disney songs whilst you photograph these snow queens!

Elsa comes with a very sparkly cape and dress, just perfect for winter scenes. In addition, she has some lovely blonde hair that pulls over her shoulder, really completing the look! She also has two faces so you can get just the scene you want! Each figure comes with a lovely blue snowflake piece, that I’m sure you will want multiples of to complete your winter looks. The bright blue and yellow really stand out in photos and those sparkles could be lit just right to have a brilliant ice scene!

Erm. So yeah. I can’t actually give you a review of the Anna figure as the box I got didn’t have a single one in! Instead, I got an extra four Edna’s. So here’s Edna playing with Olaf instead.

If you do want to look out for an Anna, she looks pretty awesome – with a beautifully printed dress as well. Reviews on other sites have all the details on this figure so I can only hope that this was a one-off packing mistake and there is not going to be a universal shortage of Anna’s!

Series 2 has some new Aladdin figures to go with the Aladdin and Genie figures from series 1. This time we get the evil baddy Jafar and the lovely Princess Jasmine. Perfect timing what with the new movie coming out soon! I can’t wait to explore that whole new world myself!

Boo! Hiss! It’s the evil sorcerer Jafar, complete with two menacing faces, ready for all your dark photo needs! Jafar comes with a two coloured cloak and some very impressive shoulder pads! He also has a snake staff. I really do wish they had included Iago (the parrot) though! That would have made this figure just that much more awesome! That said, with the hat producing the elongated face look, Jafar photographs just fine by himself!

Just to get you in the right Aladdin mood, here’s the song that inspired the photo I took:

And here is the photo (OK, so the Aladdin figure is wrong, but I had to work with what I had!) The Princess Jasmine figure is really nicely done, with a hair piece that includes the earrings and her classic tied hair. She also comes with a tiny dove that is so cute! All round, a great figure for an Aladdin fan and with the blue of her outfit, is yet another figure that really looks great on camera. The only small downside to Jasmine is that her hair is pretty reflective so some clever lighting might be needed to reduce glare.

I’m a little ashamed to admit that I’ve not actually seen the whole of Hercules. But whilst researching this post, I watched a lot of clips from it. I am now very keen on getting myself a copy as there are so many funny moments in this film that I was in stitches the whole time I was watching the clips!

First up, we have Hades. The hot headed, fast talking God of the Underworld. Just in case, like me, you want to know the real Hades, check out these clips.

I really do like the figure and I love the blue, but I have a couple of gripes. Well, one major one really – the hair. In particular that you can’t remove the hair and that he didn’t come with an orange hair piece as well. Instead, his anger face is represented by the two flame pieces. Still, the detail in the print on the figure is fabulous and he photographs so well! Just watch out for fingerprints on that black dress piece otherwise you’ll be spending more time editing than you might like!

The hero of the hour is Hercules. With a dual face (happy hero and concerned worrier) Hercules is wonderfully photogenic. His orange outfit and blue cloak absolutely pop out of photos. He’s also got some dashing hero hair to get everyone swooning over him. Hercules comes with a lovely printed shield and a sword to complete his look. He’s going to be a great figure to photograph and those facial expressions will really sell his story!

The Nightmare Before Christmas

This pair were the ones I was most happy about. It’s so great to have an official Jack and Sally that I was jumping up and down with excitement when I opened them! They both have such a good print job and are simply amazing for photographers.

Sally has a wonderful smooth red hair piece and some great detailed stitching print across her body and face. She comes with two expressions so you can mix it up. A black flower (or two) is included as her accessory. This is a great piece and I can’t wait to see how it’s used in photos by other photographers.

Jack is printed with his black and white striped suit, and has a fab bat bow tie and tux tails to complete the look. Again, the printing here is great and my only real issue with the figure is that I wonder why they couldn’t have used the long leg and arm pieces that Woody used in some of the older Toy Story LEGO sets. This would have given Jack closer proportions to how he is in the movie. Jack comes with a black and white Christmas present, filled with snowflakes. These are adorable and I want hundreds of them to decorate a LEGO scene with at Christmas!

Last, but by no means least, we have two characters from The Incredibles – Edna Mode and Frozone.

Edna is dressed in a stylish blue top and comes with two expressions, as well as a wide eyed look provided by her hair/glasses piece. She looks sleek and very well dressed in her photos, and will lend a little class to any photos. She also comes with two tea cups and what I assume is a ‘mode’ shopping bag.

Frozone has clearly found his super suit and is out and about freezing the Spring. He comes printed in his super suit and has two ice trails (I have no idea what this piece is actually called) and a rounded snowboard. I found this figure a little boring to photograph, but others might have more luck with him. I definitely struggled to come up with a way to showcase his freezing nature on the hottest ever Easter weekend in the UK!

In general, this is a great series with only a few duds. There’s a lot here for both Disney fans and toy photographers alike, and I think we’ll be seeing a lot of these figures over the coming weeks and months. I certainly can’t wait to take more photos and see what others come up with.

Missing any Anna’s from a box is a bit of a problem, and a control issue that I hope doesn’t impact the launch. I also wish that LEGO would not package any figure with a cloak in two bags. It seems overkill and means there is a lot of plastic waste with these figures.

Are you planning on picking up any of these figures? If you are, let me know what you are most looking forward to in the comments!

Thanks to LEGO for providing these figures for review.