Since her debut in the first LEGO Movie, I’ve been in love with Unikitty. Her LEGO Movie Cloud Cuckoo Palace was one of the first LEGO sets I bought when I fell back in love with LEGO minifigures after a decades long hiatus. So when the LEGO Unikitty sets were released last summer, I was super excited. My nine year old son and I had watched only a few episodes of the Cartoon Network show (yes, Unikitty has her own show, if you somehow missed the pressing news of the past two years) before the sets came out. The set I was most drawn to from this release was the Unikitty! Dr. Fox Laboratory. Ok, that and the crazy fun Unikitty! Collectibles Series 1, the blind bag buildable figures release. Luckily, LEGO had a fun “gift with purchase” teaser so my own Unikitty! kingdom grows and grows. 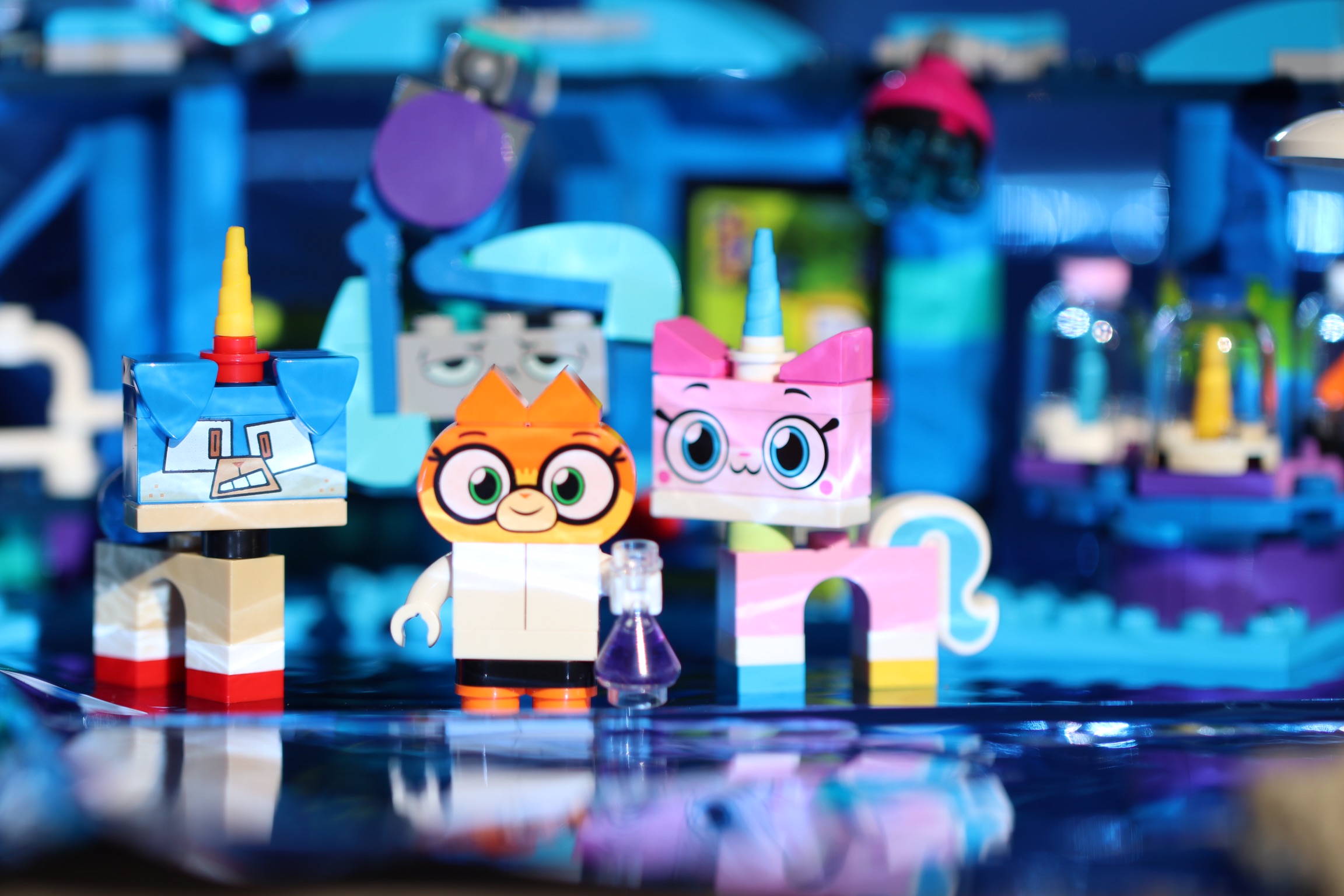 The Dr. Fox Laboratory set was fun to build. All those brightly colored bricks and sweet little details really make the set sing as a laboratory in some playful, deliriously happy alternate world. And who among us can’t use one of those right about now? The set includes the build of Dr. Fox’s laboratory, complete with everything from a sparkle matter scanner to a horn polisher (think mani/pedi for those with horns) as well as buildable figures of Dr. Fox herself, the incomparable Princess Unikitty, and her little brother Prince Puppycorn. A Robot Helper is included along with Richard, a 1×3 grey brick floating on some clear bricks and a stand. The set also comes with some nifty moveable pieces. While the buildable figures are fun and full of great details, they are even less posable than their typical LEGO minifigure sisters and brothers. 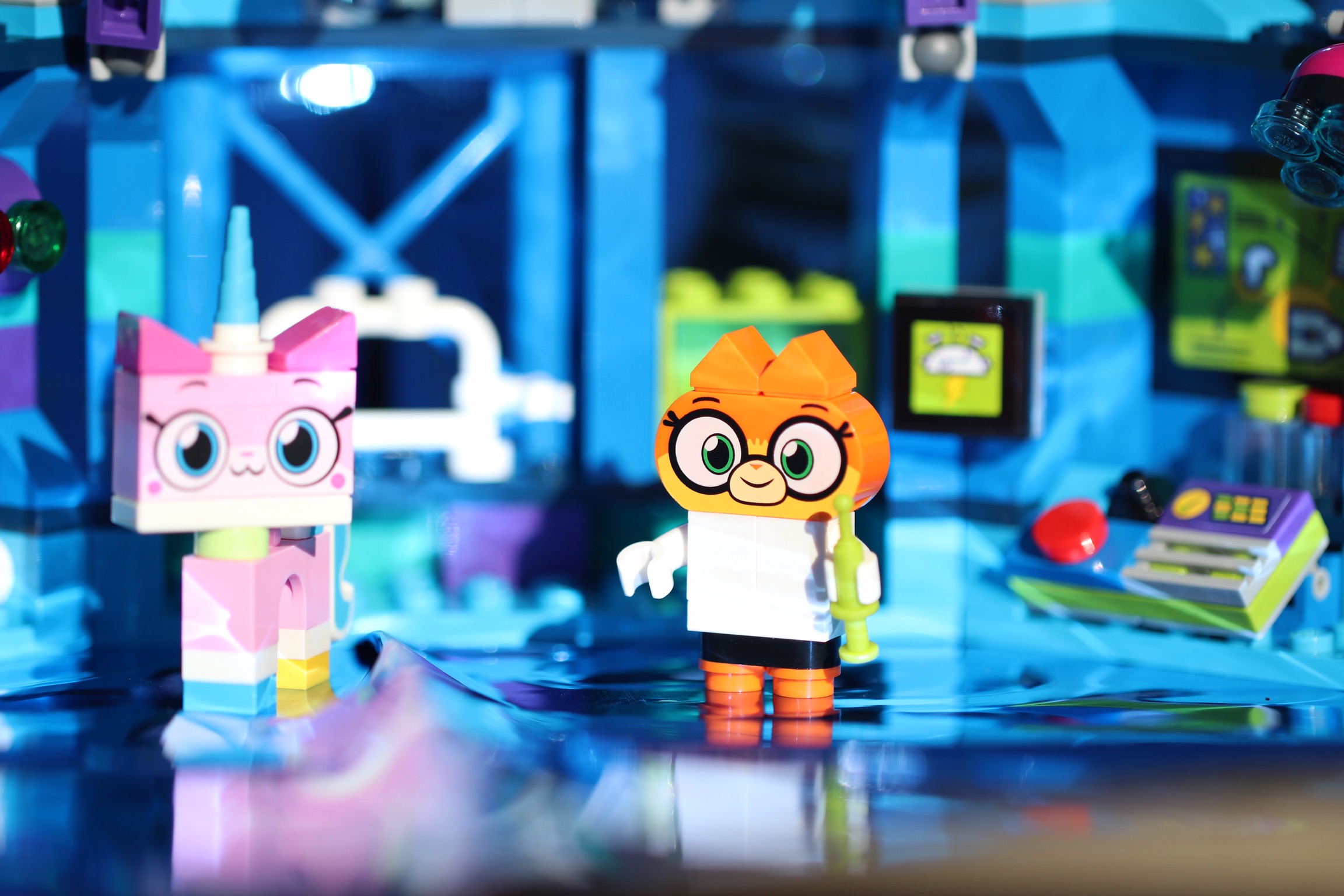 Unikitty: But you should feel better than fine! You should be bursting with happiness all the time!

While this set is a treat for toy photographers, I had struggled for some weeks trying to imagine how I’d shoot it. I typically take outdoor pics of minifigures in some scene or story. Ok, that’s actually all I shoot. So now it was time to capture a set AND the figs. Ugh. I considered doing my first indoor/”studio” shots of substance. Shelly pointed me to some helpful posts and other ideas, and I enjoyed the advice from a range of posts. I just couldn’t land on making the set shine indoors. We’re talking Unikitty and sparkle matter here after all, and those scream lots of light to me. For me, lots of light is like mid-day outdoor sunshine, not in-studio lighting. (Hats off to all of you studio photographers — I have much to learn.) 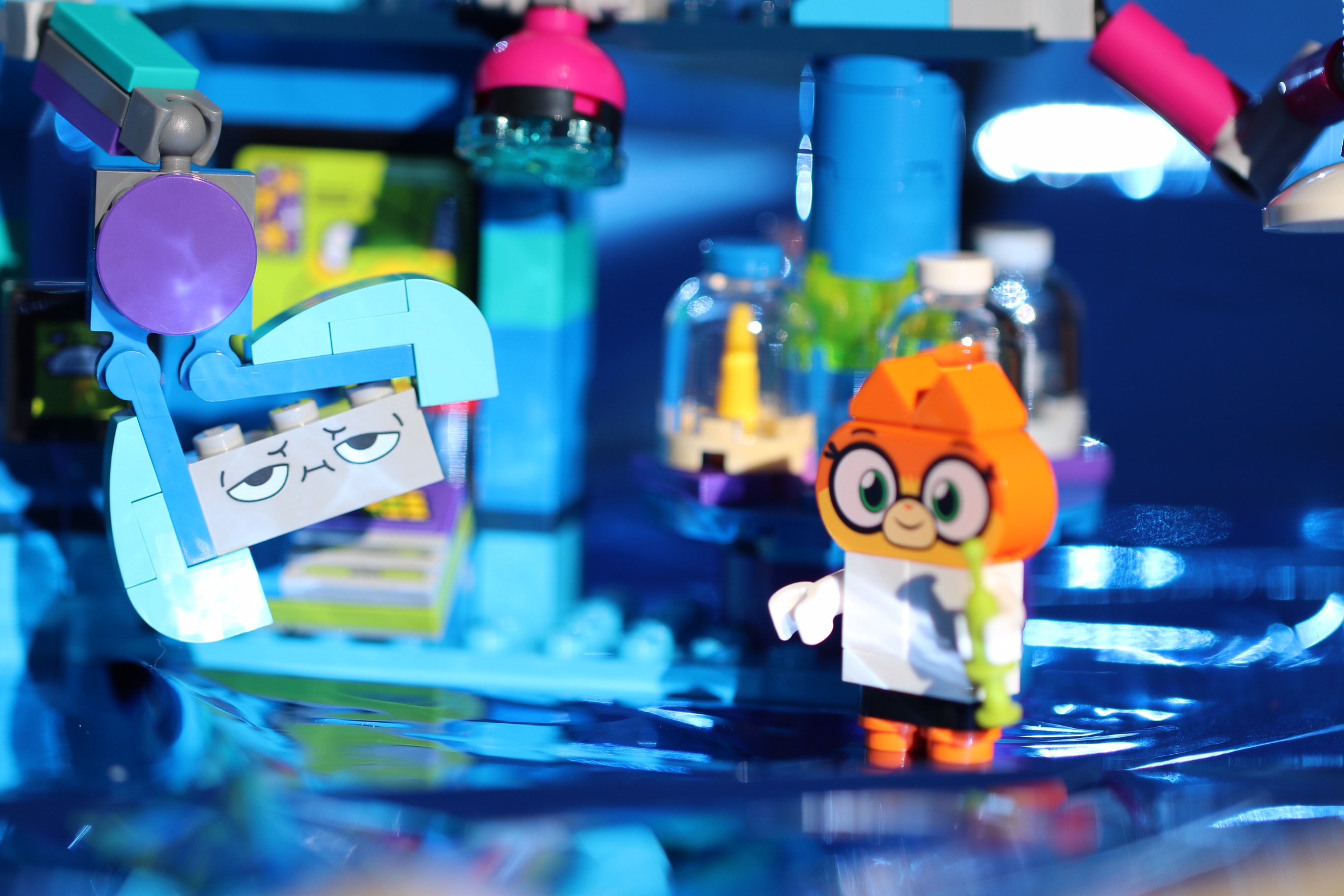 Dr. Fox: Now, let’s see. Through the power of math, I have deduced that Richard is really…boring.

As Unikitty! fans already know, Unikitty, princess of Unikingdom, is a cat/unicorn hybrid. Dr. Fox is the castle’s resident scientist and she’s always busy trying to make things better to varying degrees of success. Richard is Unikitty’s somber royal advisor and castle caretaker. Prince Puppycorn is a playful pup/unicorn hybrid. The characters that come with this set are Unikitty and her besties, and their story unfolds through the show from one peril or delight to another. To me, the show is charming, other worldly, and even surprising. The set and buildable figures are, too. 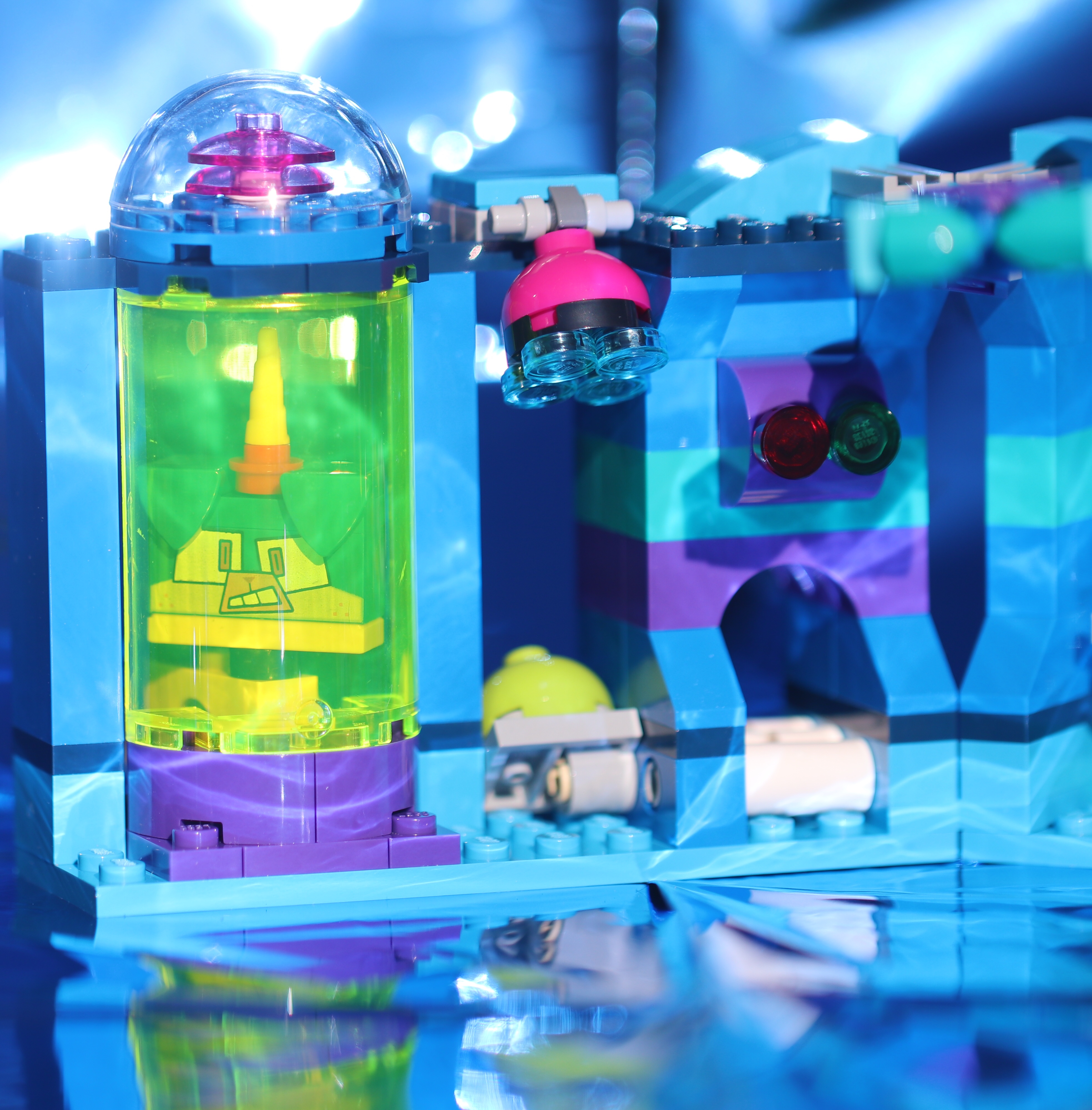 Puppycorn: Dr. Fox strapped me to this thing ‘cause she’s turning me into a robot! Unikitty: What?! I wanna be a robot. Puppycorn: Too late! I already practiced my robot noises.

Of the episodes I’ve screened to date, my favorite one is “Sparkle Matter Matters.” Unikitty finds out that the ever serious Richard has never produced any happiness-laden sparkle matter. Ever. (Perish the thought, right?) So Dr. Fox turns to overcome this tragedy through science. (Yes, folks, the Unikingdom still values science!) It’s an adorable episode complete with the rousing musical number “Serum Full of Happy Things.” The dreamlike quality of the show is striking to me and I tried to capture some of it with my camera. The quotes in this post are from the episode itself. The shots in this post are “straight out of the camera” — no editing other than a bit of cropping in one shot. Unikitty! Is all the magic I need. 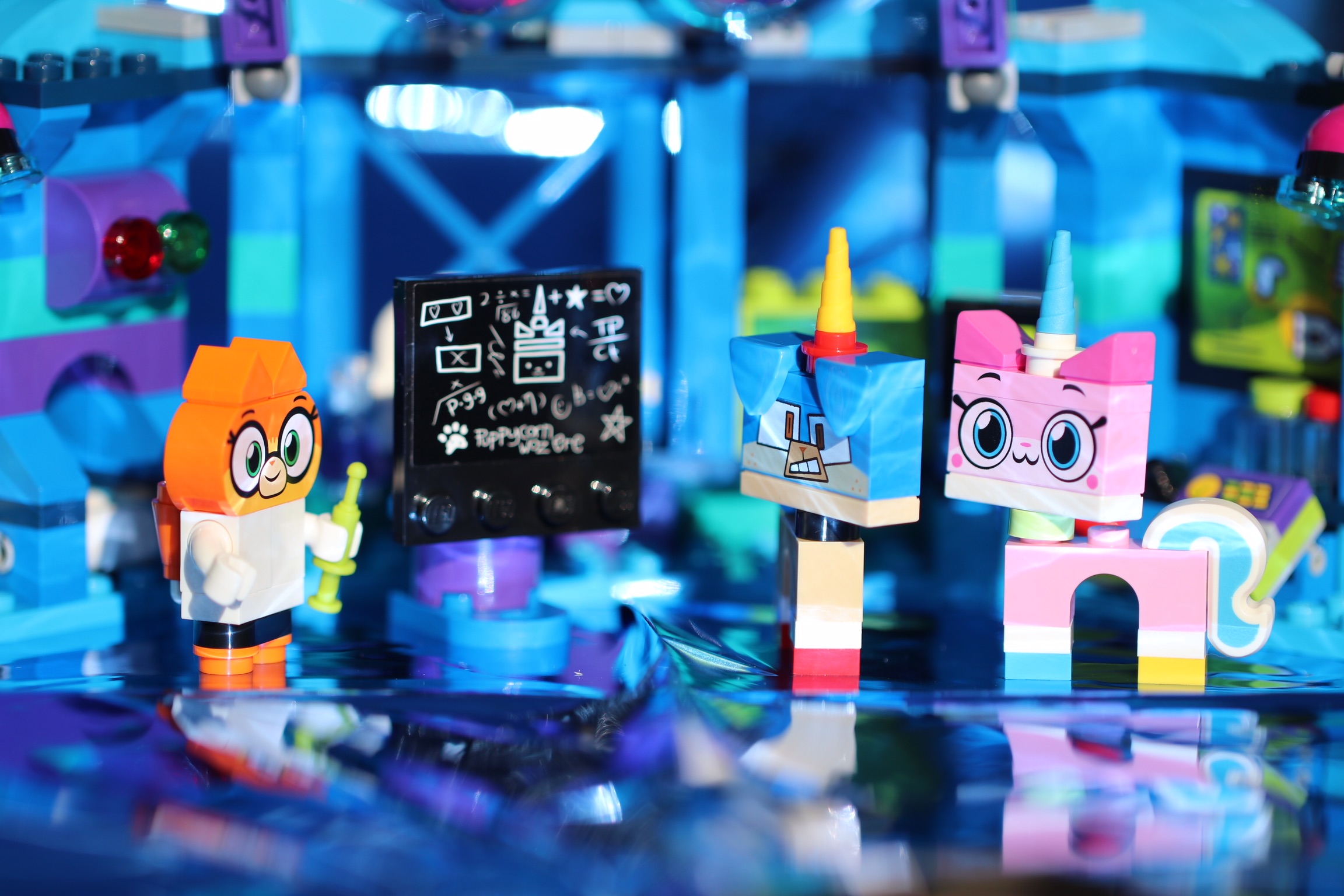 Dr. Fox: Oh my goodness! Look at all these sparkle matter samples! This is the best experiment I’ve ever done! Thanks Unikitty!

Have you fallen victim to Unikitty! love? Let us know in the comments.

About the Author: Doug Gary