Licensed to Build – a review of the LEGO Aston Martin DB5

“Now pay attention 00-AFOL, here is the new Aston Martin DB5 Creator set. At 1295 pieces and US$149, you will find it a great build and a challenging subject to photograph. Please try to bring it back in one piece after your toy photographic adventures.”

As with all of the larger Creator car sets, this is an expert build over several hours. This set is designed with many of the working gadgets of the famous original and therefore had a higher than average Technic piece count. The rear bullet proof screen and side wing machine guns operate smoothly, while the cleverly designed ejector seat mechanism is bound to bring a chuckle or two. The only two ‘sticky’ gadgets are the finger operated rotating number plate at the front (the rear works smoothly) and the reception dashboard (homing radar) that are hard to operate. The opening bonnet/hood and boot/trunk pieces are well designed with some interesting SNOT techniques, as are the two doors and windscreen / rear window sections. The inline six engine is reasonably well detailed, but the cabin interior is somewhat lacking. To be fair, this is to accommodate some of the mechanisms for the gadgets. The only gadgets that proved to be an issue for the designers was the tyre slashers. You will need to retrieve the two supplied, and aptly chosen, telescopes from the boot to extend the slasher assemblies. 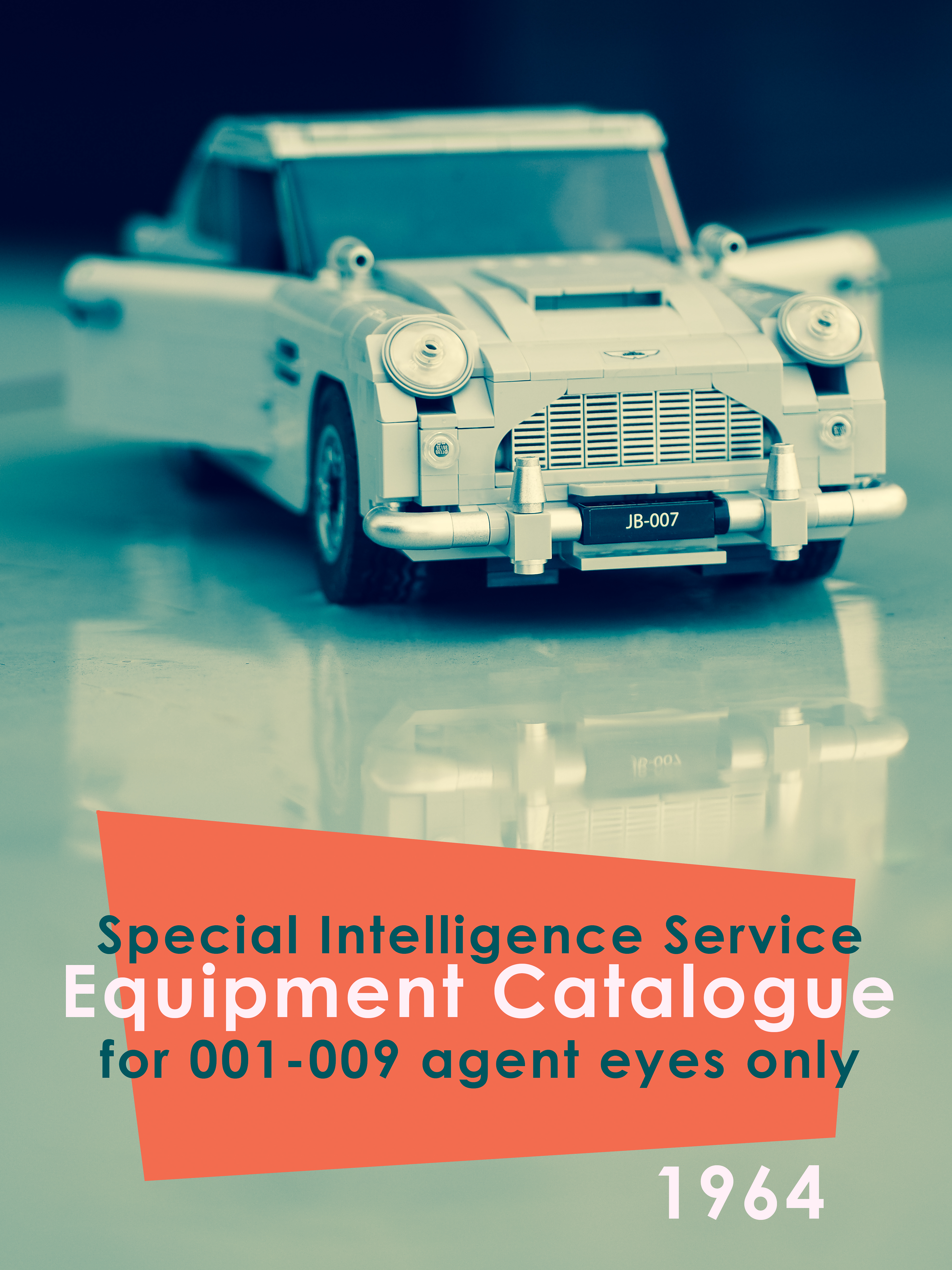 I have always found the larger Creator cars, from the Volkswagen T1 in 2011 through to the Volkswagen Beetle to be excellent builds, but have limited photographic potential. This is partly due to their size and limited cabin space. The scale is too large for Minifigures and 3.75” figures tend not to fit because of the limited leg space in the cabins, especially under the dashboards (Re-ment skeletons seem to be the exception here). I found myself thinking of how I could photograph the DB5 as a toy, but without it looking completely unrealistic and silly. Being a casual fan of James Bond, and really liking the character of Q, I thought of something that the Q Branch might publish in a fictional Bondverse. I’m sure the real MI6 would have never put together a glossy catalogue, but then I’m sure they never would have issued Aston Martin vehicles either!

Once the build was complete I wanted to shoot during the morning blue hour to keep the light soft to match the predominantly Light Bluish Gray parts of the car and to minimise the possibility of reflections. My chosen outdoor spot was also thwarted, as when I arrived I found a work crew had sealed of the area for maintenance. 10/10 for fixing the road at 7AM on a Sunday, but did it have to be that Sunday? As it turned out I found an even better location at a local business park, where the strong vertical lines of the buildings fitted well as a formal context for the vehicle and complimented the boxy lines of the set. A further background of small trees in the garden area worked well to put a bit of colour in the images, making the scene look a little less stark and utilitarian. 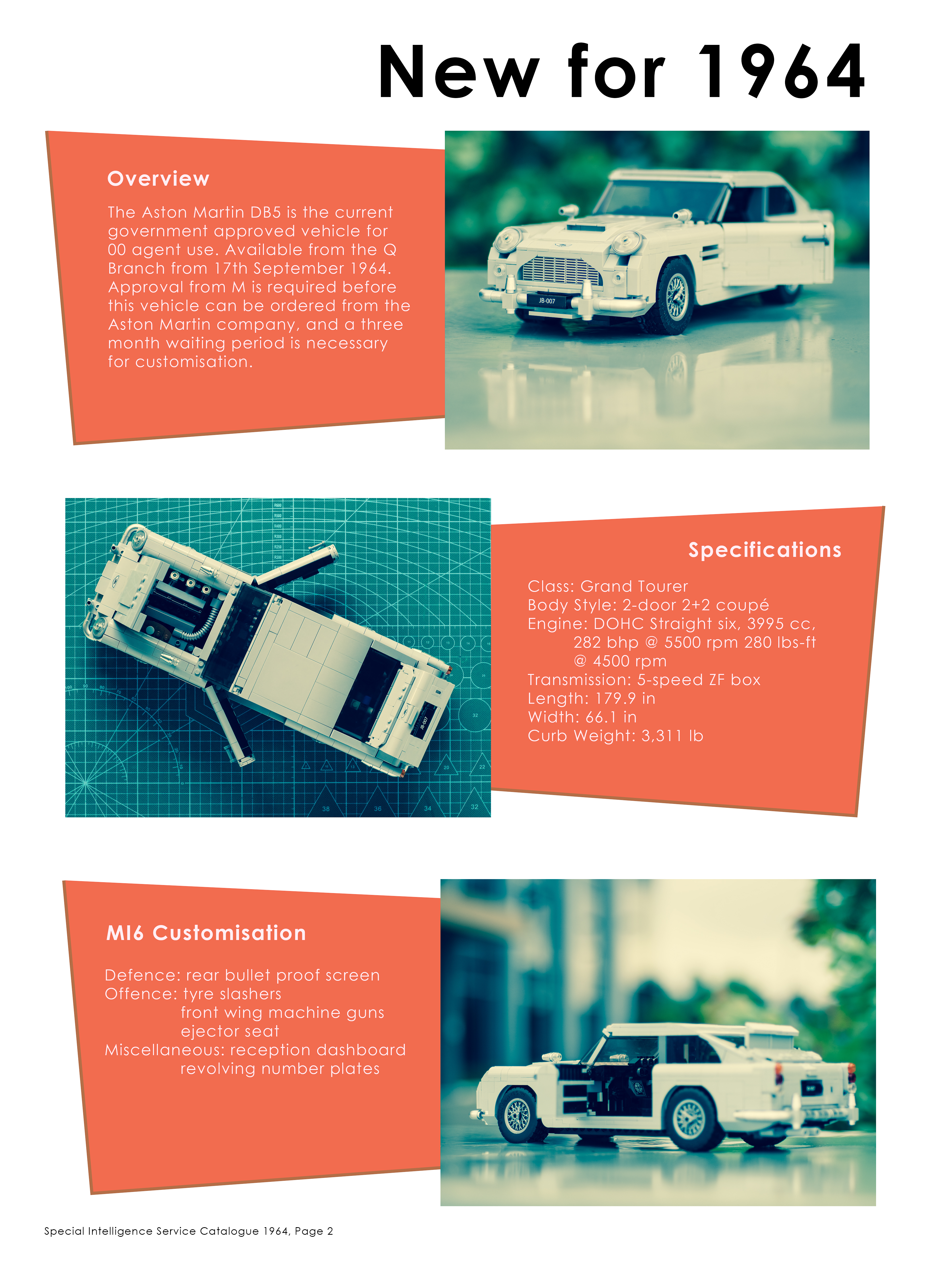 I managed to have the added bonus of morning rain which added to the mood and dropped a few light spots on the model for effect (although I ended up not choosing the images that showed this). Because of the rain I had to wait out most of blue hour in the car and halfway through the shoot the sun came out and spoiled the look I was going for. A very shallow pool of water on the top of a fire hose cabinet was the right depth and height for the car and the perspective with the building behind. I took the main shots before the sun came out and retired home to finish the detail shots. I wanted the detail shots to showcase the ingenious gadgets included in both the original car and in the set. A previous idea was to give a blueprint like feel to the set with a grid marked cutting mat underneath and I returned to this idea. To try and keep the lighting somewhat similar I shot from a shaded doorway with natural light bounced back from the other side with a large white reflector. I further matched the two sets of images,  the best I could, in post processing. In the end I went for a cross process filter in Lightroom to give that ‘colour is not right’ look that you may have seen in a 60s publication. The photography was complemented by the addition of quasi serious text in the faux catalogue and the 60s feel continued with the use of mid toned coloured non-rhomboid shapes and the Century Gothic typeface. Specifications for the catalogue were sourced from:
https://en.wikipedia.org/wiki/Aston_Martin_DB5 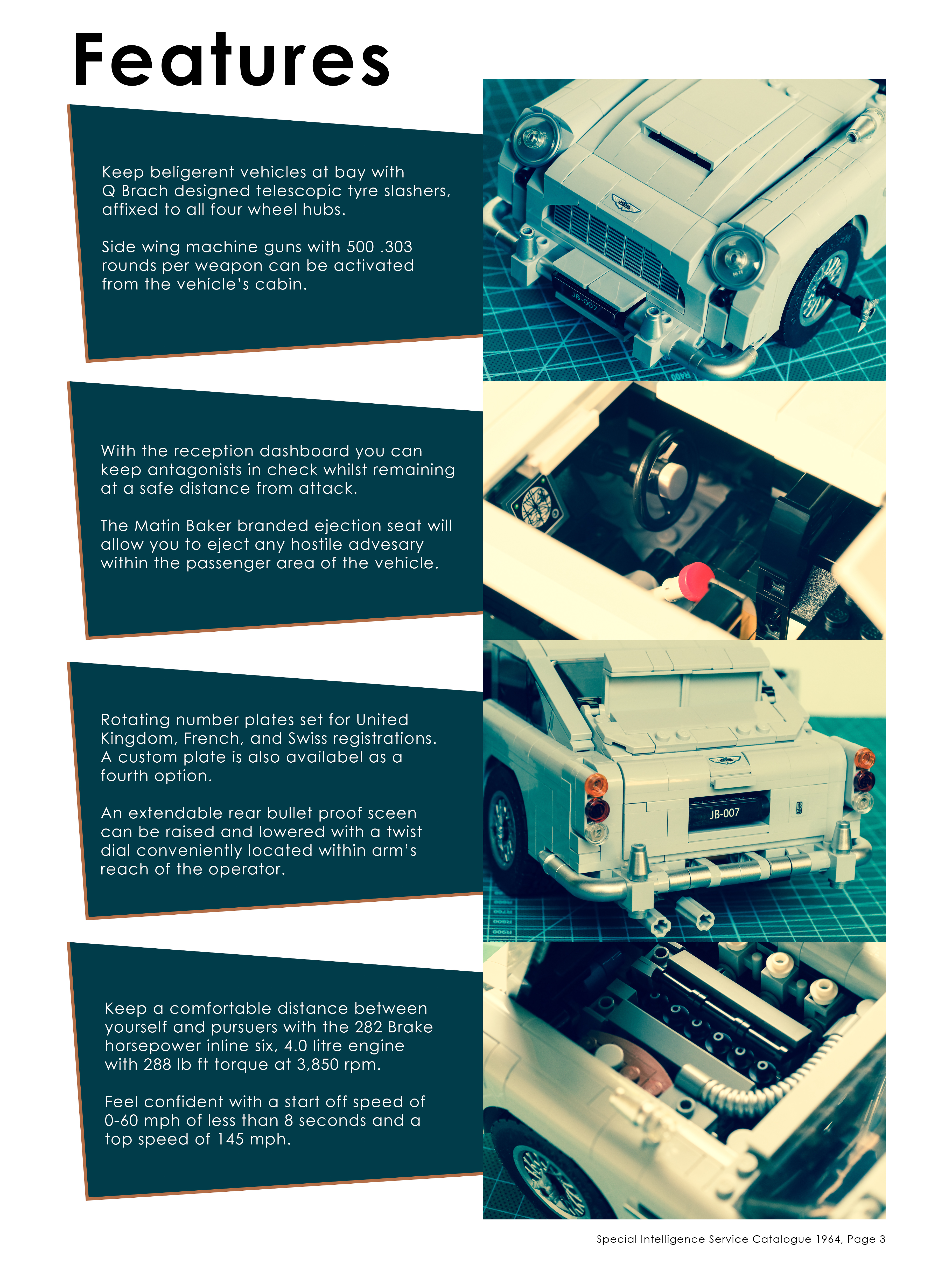 For the sheer pleasure of building a clever design, the cool factor of having something so iconic, and the display potential, I believe this set is great value and well worth the purchase. From a photographic perspective I feel the set is boxy and plain. Its size prevents it from supporting figures effectively and it doesn’t really have the potential to hold a lot of photographic interest on its own. If I didn’t have the idea for the faux Q Branch catalogue I feel I would have been hard pressed to do this set justice photographically.