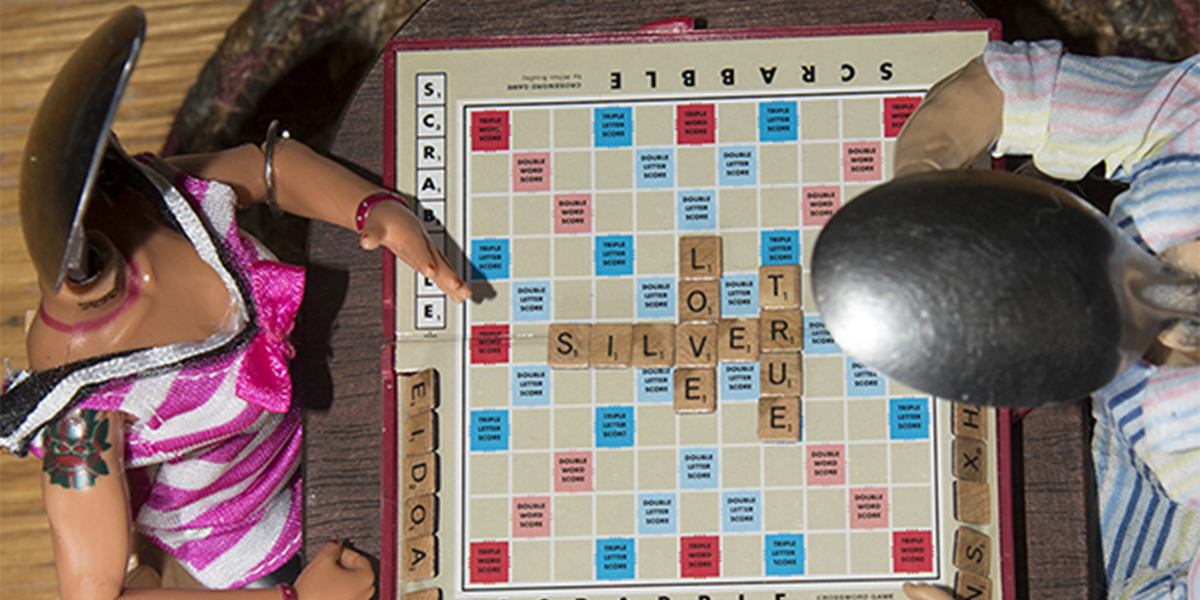 Many things seemed to come together all of the sudden—even though everything was in place for years. The Spoons were like a perfect little storm.

I (Momma Spoon) have always been enamored with miniatures. I had a little jade buddha on a charm when I was young and it drew me in to the land of tiny. I’ve also always had a bit of a packrat streak. I save stuff because I like to think I can find a use for anything! This means I’ve accumulated lots of awesome little things over the years since that tiny jade buddha found its way to me.

Years ago, Mr. Spoon’s real life parents (Grandma and Grandpa Spoon!) had spent many hours (actually more like days, weeks, and months) building a big doll house that was very similar to their actual house. What an ambitious project! They also made many of the accessories and furniture pieces in the house. This was their hobby and their skill was impressive. When we had our first daughter over 18 years ago, this amazing doll-house was given to us! It has been *well loved* by our kids

Because I like fun gag gifts, I had gotten Mr. Spoon a “souper spoon” for a stocking stuffer several years ago. After a chuckle he put it away, but to humor me he planned to take it to work. Before they left, we snapped a pic of it in front of a piece of scrapbook paper that looked like a brick wall. It looked like a cute little spoon man standing there and he made us giggle. We quickly realized he “fit” the dollhouse and that we had plenty of props for him, so why not? We also figured he could use a few friends be-cause everybody needs em.

Lucky for him, in addition to—or because of—my mas-tery of saving stuff, I’m also kinda crafty, and I happened to go through a silverware phase. You know- making small easels and frame holders, jewelry, lots of “pinned” things. Anyway, I found myself with lots of silverware. And for whatever reason, we also had a small doll who was missing her head. Ahhhh. Perfect!

Fun quickly ensued while we scoured our kids’ and neighbors’ dolls and began making our little friends. We had a rather lengthy photo shoot throughout the dollhouse and decided the Spoons needed an instagram page!

Our friends on facebook were mostly quiet in the early days. A few really liked them and a few really didn’t, but most said nothing…til they got to know them a little better. 😉

So we started on social media and realized there was a whole community for toy people! What! We were a little late to the party but we loved it right away. What a fun, supportive, interac-tive place to be. Inspiring too. We saw loads of amazing setups and we started wanting to make amazing setups of our own.

That’s when the dioramas came to life for us. The first one was quick and simple, yet so easy and effective. I had made a handful of perfume bottles and wanted a way to show several at a time. After enJoying a couple nice cold beers togeth-er, Mr. Spoon took our beer box and made Scents. I loved it and I wanted more! We realized that with dioramas, no place was really off limits. We could build lots of places for the Spoons to frequent!

We had just bought a (Honeywell) evaporative cooler for our house, and the big box was too perfect to just recycle. A new little project was born when we decided to turn the box in to the Honeywell.

Here, the opportunities were (and still are) as open as our imagination. Have you ever been to a large downtown building where, once inside the door, there are lots of stores and businesses? That’s kind of like the Honeywell.

Here, the opportunities were (and still are) as open as our imagination. Have you ever been to a large downtown building where, once inside the door, there are lots of stores and businesses? That’s kind of like the Honeywell. There’s a main door which presumably leads to many fine establishments, each actually housed in its own diorama or just built temporarily. There are also businesses on each side of the main door, with those actually being part of the diorama.

As you can imagine, these nifty little environments can take up some decent real estate, and sometimes it feels like the Spoons are taking over our house. Then there are stretches when there simply isn’t time to play, and the Spoons and their things end up piled in a corner until that time comes again!

Scene ideas come to us all the time and we keep an ample list on my phone to check off. Sometimes they are fairly spontaneous, like when we turned our fish tank into a big aquarium attraction, and others involve considerable set up time, like our camping scene, when we drove to a good location where you could see the mountains and the water to “set up camp.”

Some scenes mimic real life, such as when the big eclipse happened, or when we had our 25th wedding an-niversary. We like to play scrabble, so the Spoons were playing scrabble and spelled silver and love. Aw. There’s also the scene of our oldest packing up for college…some of them are actually kind of therapeutic to set up.

Some scenes are just because they make us smile, and others are to showcase an interesting spoon we’ve found.

Some scenes have a specific prop in mind. With all the di-oramas and their details, my fascination with and love for miniatures grew… I started making things for the Spoons and added “making minia-tures” to my growing list of “Things I love!” Mr. Spoon even gets in on the fun of making stuff, like when he made these awe-some walls and signs for Macki’s, as well as that Hamms beer sign. Classic.

So sometimes it’s something that we made that inspires a shot…plus I think it’s fun to create entire scenes for little handmade goodies. Like the Christmas card scene…I had so much fun making stuff for that set up!

And the kitchen table art scene was a fun one to highlight my tiny paint set and cray-ons…as well at Mr. Spoon’s gentle poking of the Open Heart Collection. 😉 Plus, the little toys and things that are constantly underfoot be-come Spoon property all the time.

Remember my packratedness? It can be a curse and a gift all at once! The Spoons are never lacking. This fruit diffusing water bottle used to be a pen cap! Yummy!

Sometimes our friends and family bless us with gifts that are perfect for the Spoons and we do scenes around those. This is true of the outhouse which is actually a handmade birdhouse from our sister in law. And the cute little footstool is from Mr. Spoon’s sister. Or when my brother brought out his RC helicopters for some fun.

We made an entire diorama to display some awesome lit-tle surfboards a friend from high school made us. (Did I mention we’re high school sweethearts? <3 )

There are even times the Spoons venture out into the real world. They’ve traveled to far off distant places, like Las Vegas, and Califor-nia. They’ve been to Hogwarts— thank you Universal Studios! and the cornfields of Illinois. They also get out locally every so often. They’ve been to an NFL football game, the county fair, the local res and swimming pool.

They also have their own activities that get them out and about…such as volleyball and dentist appointments.

One of the challenges of any scene is dealing with knock-ing things over. This is true for any toy photographer, I imagine. I don’t like to glue things down because I like to re use props, so I’m a big fan of sticky dots and poster putty. A challenge that I actually quite like is that of showing emotion with the flatware. When I first got into photography about 5 years ago, I had a small teddy bear that seemed easy to show emotion with.

The Spoons and their friends can be a bit more difficult, but that’s part of the fun.

The response to the Spoons is typi-cally pretty polar. People seem to love them or hate them. Some think it’s weird or twisted while others see it as an opportunity to escape the every-day for just a moment, to laugh, to cry, or to just relate. When someone can look at an image and feel something, or make some kind of connection, that’s the ultimate for any artist. We feel the same about the Spoons and their friends. Making others feel something because of our flatware is a pretty awesome thing. I’d like to think we even win over some of the doubters eventually.

Because when it all comes down to it, the Spoons and their friends are just trying to make their way in the world, like everyone else. In doing so, they try to embody humor, positivity, and peace…and what’s not to like about that?