Reflections on a Toy Photo Safari

Scratch that: they are [expletive deleted] amazing.

As I write this I am sitting in the Portland International Airport.  I have the music of my homeland cranked (Glass Tiger: Thin Red Line, if you are curious), and I am reflecting back on the past several days.  Ya know, for posterity. They were good days.

This was my first Toy Photo Safari, so I was not sure what to expect. I decided to forgo my usual up-tight over-planning personality and just go with the flow. Turns out, going with the flow led to some amazing memories that will linger in my subconscious for a very long time to come.  Let me tell you about some of them.

The 2018 Toy Safari was officially on the coast of Oregon.  An amazingly beautiful stretch of west coast real estate. Officially it was due to begin with, as all good things do, food.  5pm on the Friday evening at a rented house on the Oregon coast.

I live on the east coast of the United States of America (though I identify, in my heart of hearts, as Canadian, and the commonwealth she belongs to – a seemingly superfluous fact that will become relevant in a few minutes).  As a result, due to Time Zones (insert blaming of Canadian engineer Sir Sanford Fleming (nope, this isn’t the relevant part – be patient!)), I flew in to Portland Oregon on the day before.

This means that I was strategically located to meet up with a bunch of toy photogs for the 9:30am showing of Solo: A Star Wars Story on Friday morning.  This brings me to the first long lasting memory I shall have of the safari: Being recognized by Mary Wardell while walking into the dark theatre. A few minutes later I met a bunch more toy photogs, even tho the safari wasn’t due to officially start until that evening.

The Safari officially kicked off with a potluck.  My next memory is walking up to the house where the potluck was held from my hotel (6/10ths of a mile, or 1 kilometer), and laying eyes on the infamous Brett Wilson for the first time.

This leads me to the second memory that will linger:  Bonding with Aussie photographer Brett Wilson, as distant members of the commonwealth, over the next few days.  You’re the best, mate! (This is the Canada/Commonwealth connection you were anxiously waiting for.  Thanks for your patience. We will now return you to the regularly scheduled blog post).

I spent the next few hours consuming large quantities of food, and making small talk with a bunch of toy photographers – some of who I recognized their work, some I even knew their real names ahead of time.  As a practicing introvert, names and faces went by like a blur. This is expected. However it was clear, based on the “shop talk” and the laughs – oh my sweet jumpin’s the laughs –  that I was on the threshold of something special.

Next memory: Jax and Law cracking jokes in the kitchen.  Hilarious folk they are. Truly.

That evening we went to the beach and shot some toys at sunset: 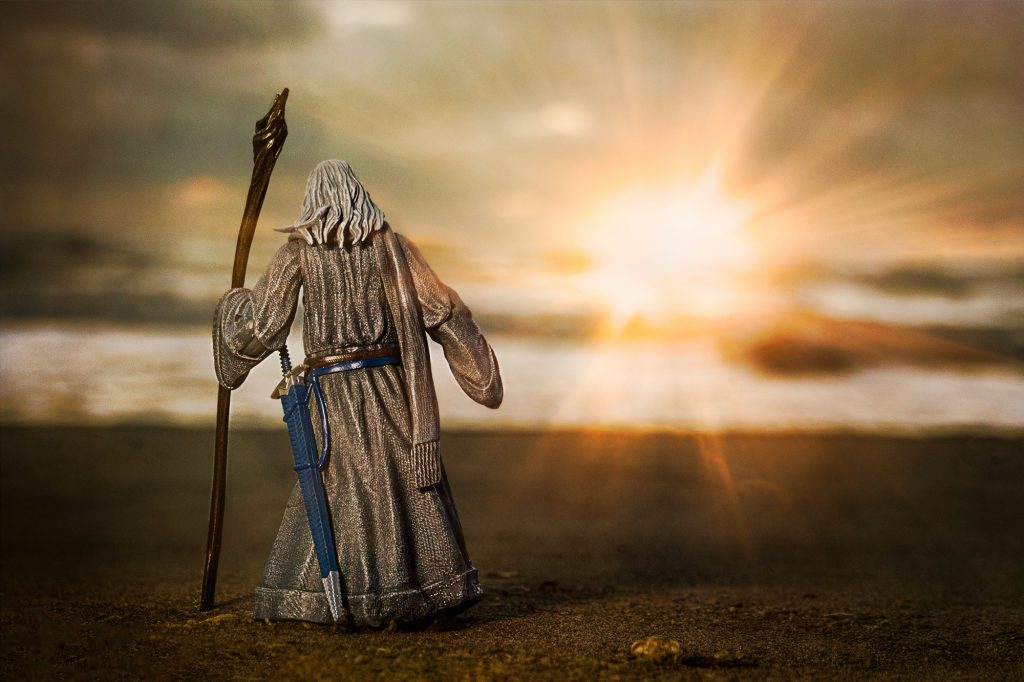 Gandalf on a beach, my first image taken at the Toy Photo Safari

So the next morning we had a scheduled outing to Oswald West State Park, and the pictureesque beach contained therein.  I, being my normal eager-beaver self, showed up a good hour ahead of time. So I hiked down to the beach and started taking photos.

I am glad I did.  To understand why, let’s take a trip into Dave’s Demented Psyche(™).

I have been to a great many photographer meet-ups (tho this was my first one where I wasn’t the only toy photog). One thing I have learned was that I lose all creative ambition when I am in a crowd of creatives.  I suspect the reasons why could fill psychology textbooks and payoff my therapists college loan, but needless to say, it is a real thing that happens.

Since this was not my first photography meet-up rodeo, I was prepared for this quirk of my personality.  So my plan was that, when the rest of the group arrived on scene, I would start taking behind the scenes photos.  This both allowed me to meet everyone, and spend a little one-on-one time with them, but also observe the various techniques employed by the amazing photographers I was sharing a beach with.

This leads to the next strong memories.  Leila swearing me to secrecy about a shot she was taking for one of the weekends contests, but letting me shoot her for the behind the scenes.  FatherFigures showing me how to use wire to support poses for action figures.

Some of the behind-the-scenes shots are here (click the image to embiggen): 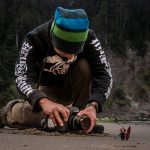 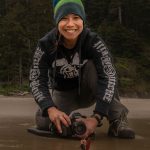 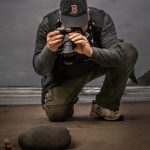 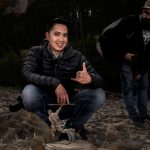 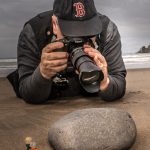 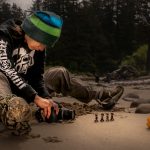 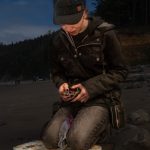 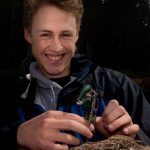 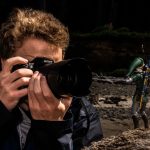 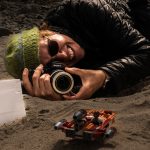 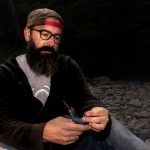 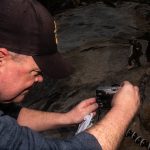 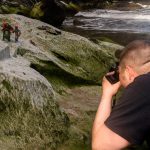 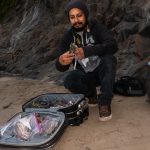 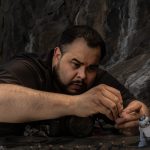 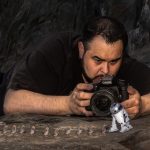 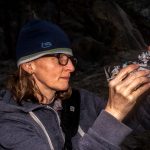 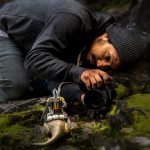 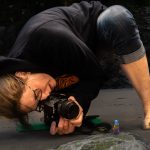 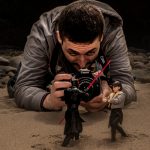 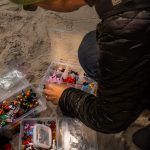 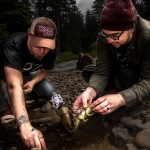 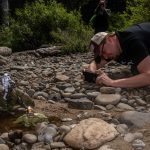 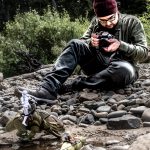 Another strong memory:  Working with Aussie toy legend, Brett Wilson (see commonwealth references above) who helped me get a practical effect shot with a Tusken Raider action figure by throwing sand into the shot, whilst I posed the figure and pressed the trigger. 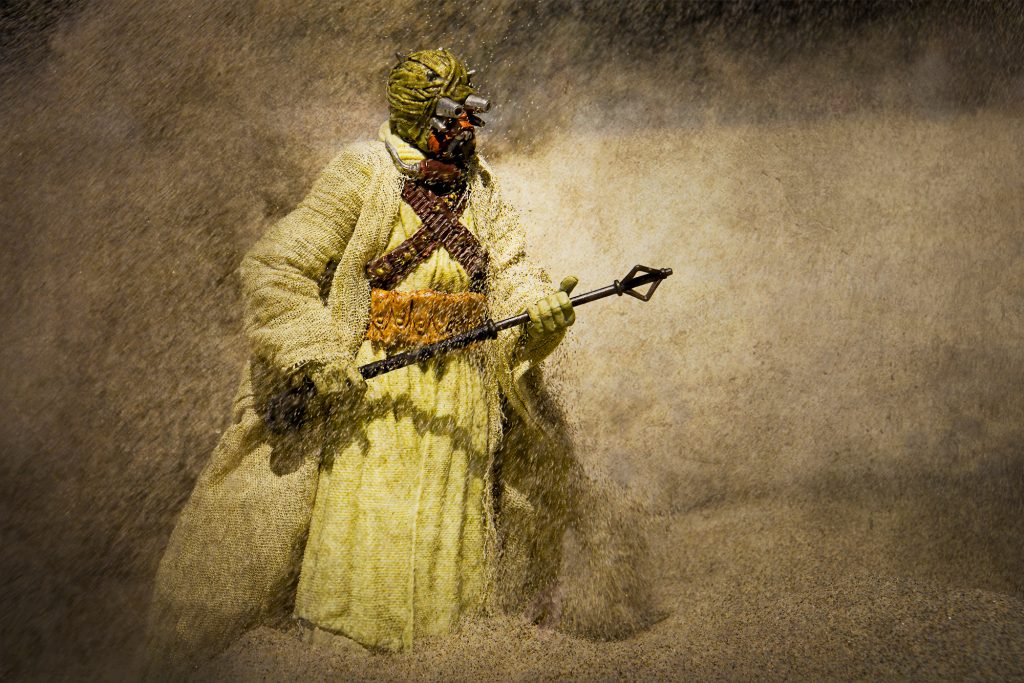 A Tusken Raider in a sandstorm. One of the many shots I took with others at the Oregon Toy Photo Safari

That evening we hung out at Shelly’s rental house.  Next memory: Setting up a time-lapse video with Krash Override of a stormtrooper action figure watching the sunset.

Due to some quick thinking, LEGO provided the Safari with Brick Head kits, and participants were challenged with creating the best selfie-BrickHead they could. Another strong memory:  Building BrickHeadz with Shelly. 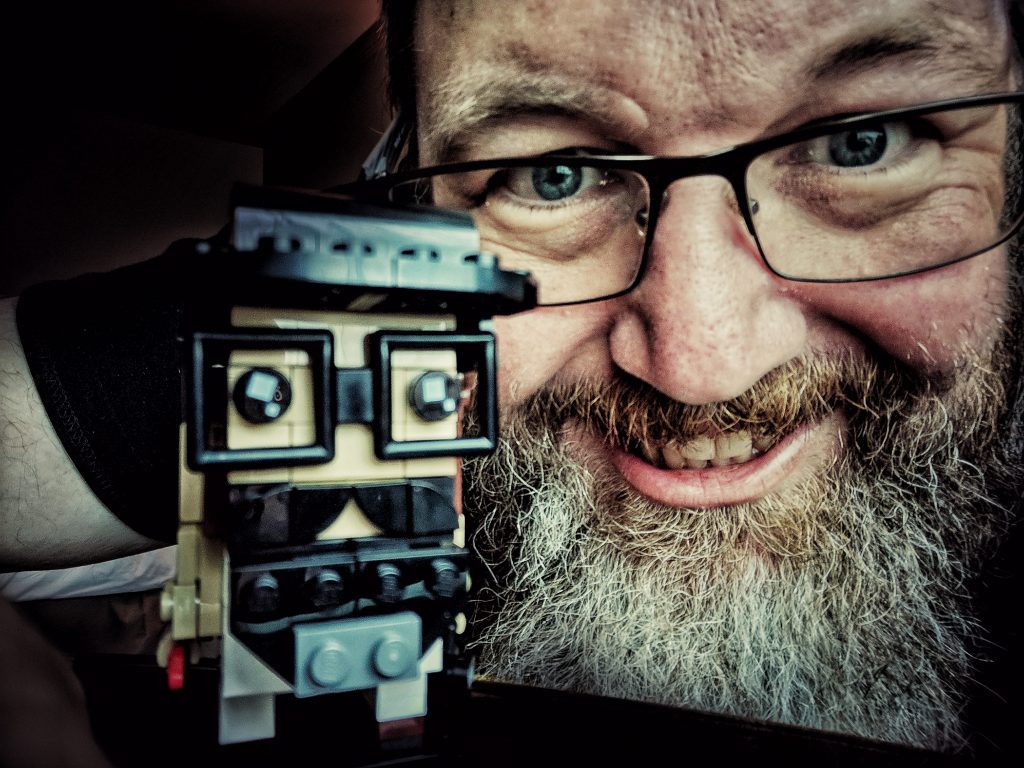 A custom Brickheadz, designed to look like Yours Truly

Inspiration Strikes In a Crowd

Being around so many awesome photographers was really having a positive effect on my creativity.  The next morning highlighted that completely.

The next outing was scheduled for 10am.  Naturally, still being on east coast time, I woke up at 9AM… east coast time.  That’s 6AM Oregon time (thanks again Sir Sanford!). Consequently I had 4 whole hours to kill. However I was armed with a huge surge of creative energy, and this completely awesome custom minifig (created by the customizing wizard known as @Krash_Override).

I was also armed with a hotel room with an historic stone fireplace in it. So I killed some time setting up this shot. 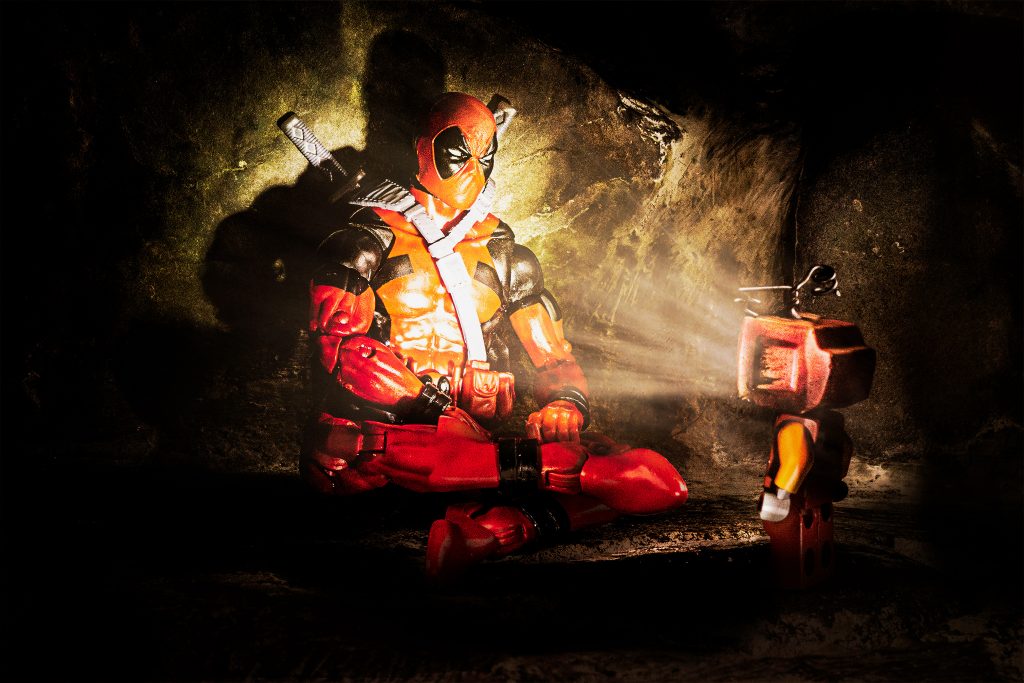 Then I headed to Oswald West State Park… again.

Oswald Park has two main features:  a picturesque beach, and amazing old growth forest full of tall trees, and gnarly old stumps (read:  amazing background in awesome light.) The day before we spent almost all of our time on the beach, so we decided to go back and shoot in the woods.

This was a fantastic idea, and it leads to another strong memory:  Collaborating with Krash Override on a minifig/action figure mash-up shot.  It was for one of the many contests held during the Toy Photo Safari. He provided the action figure. I provided the minifig, and together we nailed first place. 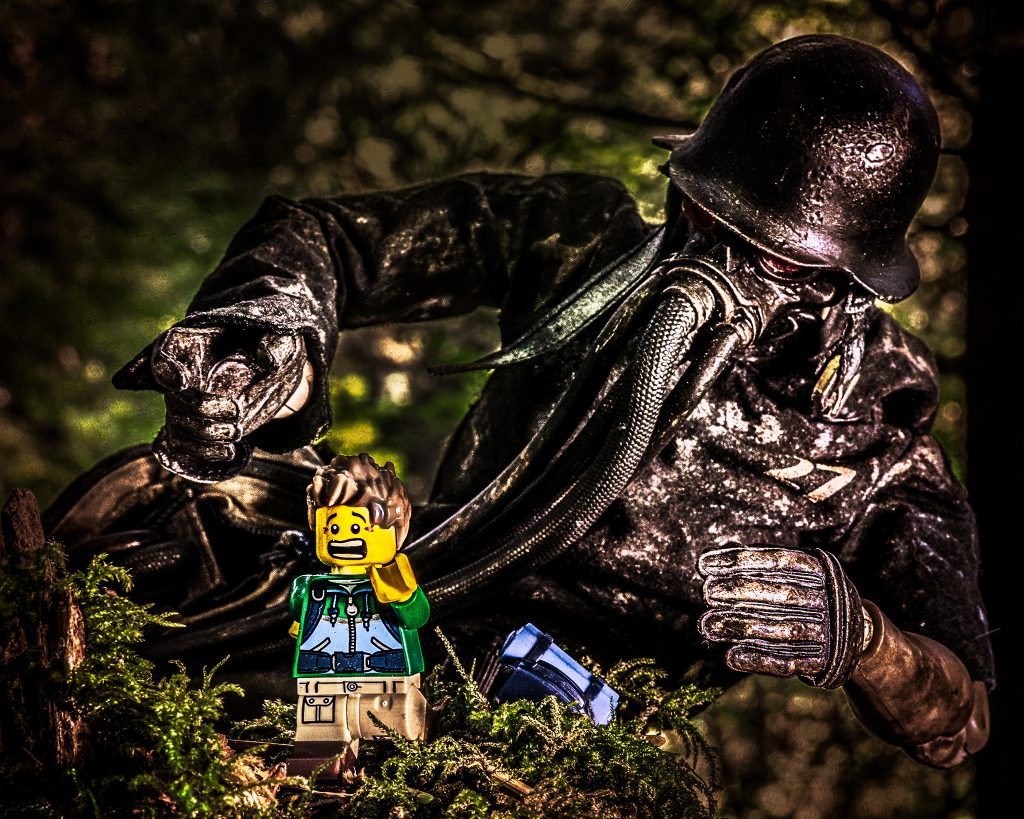 If you are wondering “Toy Photo Safari Champion” is absolutely going on my resume.

Another strong memory:  Having a constant stream of Lord Of The Rings quotes, and “that’s so cool” comments coming my way from perfect strangers as I took my time to capture a Gandalf shot on the main path  It was that moment that I realized I had stopped caring what the public thought and just got my toy photog zen on.

You Don’t Have To Go Home, But You Can’t Stay Here

The Safari officially ended on Sunday night.  However those of us that did not have to travel immediately decided to hang out on another nearby beach the next morning: Acadia Beach.

Shockingly,I ended up waking up a bit early (you are likely sensing a theme about my sleeping habits).  As a result I checked out of my hotel and headed to the park 2 hours early.  Having the beach to myself (at least from a toy photog perspective), I was able to get my creative juices flowing.  As of the writing of this I have not processed all those photos, so stay tuned for those images to hit a social media feed near you soon.

However when the others started trickling in, I was ready to socialize. I spent a lot of the time talking to the other toy photogs,. I also borrowed some of their toys, and played with new-to-me subject matter.

Then when the time came to head to the airport, we all said our goodbyes.  I drove FatherFigures to the airport and dropped him off. However my flight was a few hours after his, so I decided to drive over to a store that sells LEGO (Bricks and Minifigs), that the local toy photogs recommended.

As I walked up to the shop I saw someone from the safari in the car, also parking.  We walked into the store to see someone else. Shortly thereafter half a dozen more toy photogs arrived. Consequently, it was like a family reunion all over again. This is my final strong memory of this weekend.

We shopped together, joked around, bought some LEGO, then finally parted ways.

And this brings us back to where you found me.  Sitting in an airport terminal, waxing nostalgic.

This was my first Toy Photo Safari. It won’t be my last.  I arrived a stranger, and left a friend, with so many creative and interesting people who all happen to share this quirky little hobby of taking photographs of toys.

The Toy Photography community is much larger than I thought, yet still small in the grand scheme of things. However it is full of interesting folks.  You really can’t appreciate that until you show up to an event like a Toy Safari. I highly recommend it if you can manage it.

So I am about to board my flight home.  I am leaving with a head full of memories, recharged creative batteries, drained camera batteries, and a new batch of friends.  Not a bad way to spend a weekend.

I am already looking forward to the next one.
[Dave]