This might be attributed to my lifelong fascination of comic book characters like Superman, or awesome Star Wars spaceships, but I’ve found that I love making toys fly in my photographs.

I think flying images satisfy a few different creative urges of mine. I get the chance to bring my toys to life in fun and unexpected ways, and play with two of my favorite pieces of imagery: billowing capes and things floating around in outer space. Also, these shots allow me to do some fun post-processing, but not enough to drive me crazy!

One of the very first images I ever took as a toy photographer was of Wonder Woman, flying around in her trademark Invisible Jet. You can’t see the jet because of the invisible LEGO pieces I used, but I assure you that it’s very detailed and is perhaps the most impressive thing ever created with LEGO bricks. 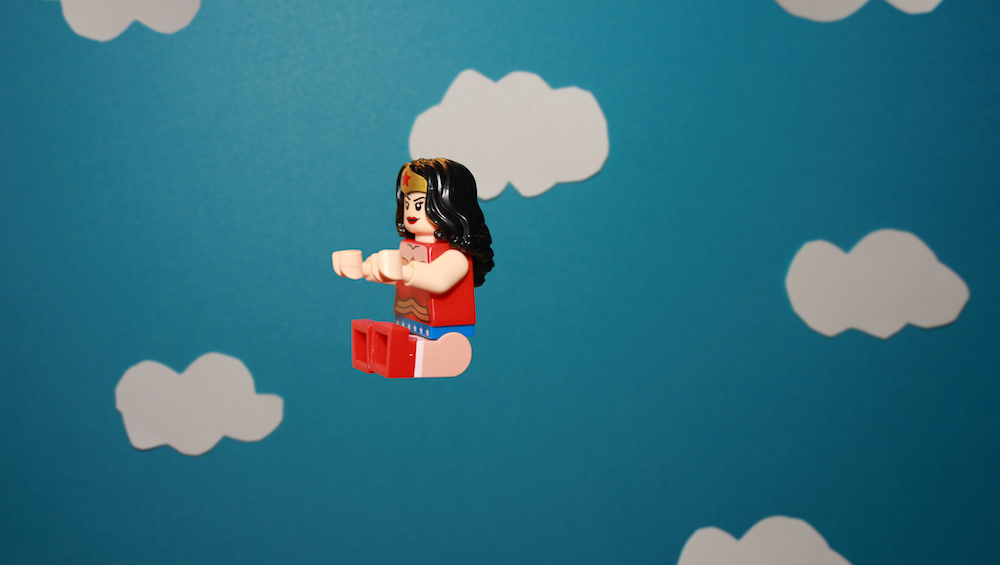 From there, I was hooked, and started experimenting with other ways to illustrate flight in my photographs. 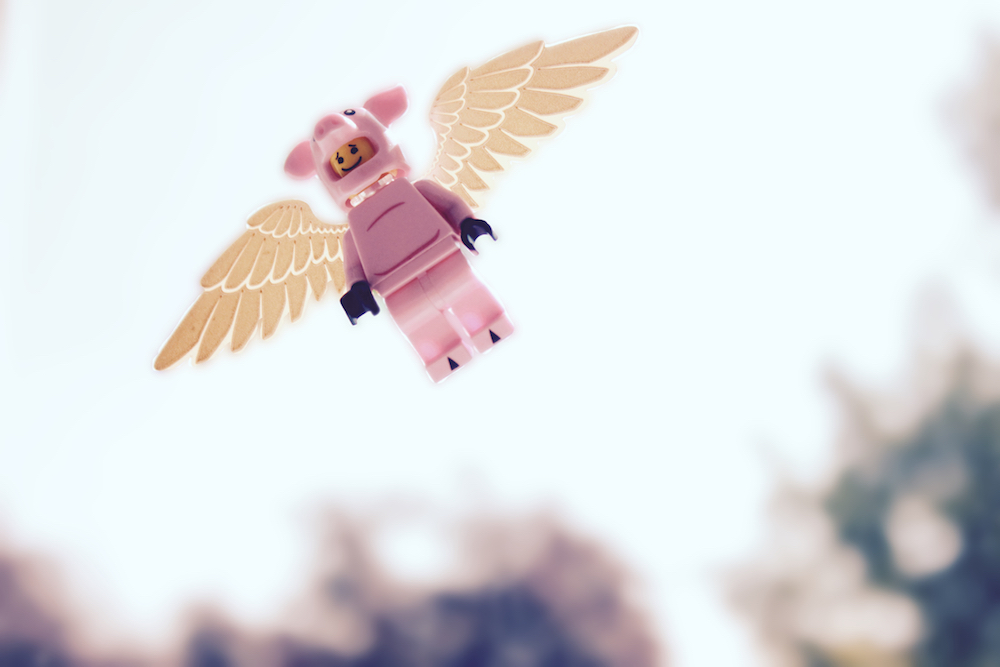 This flying effect was achieved quite simply. I just taped the back of the pig to a window!

I’m certainly not the only photographer to do this. There isn’t a day that goes by where I don’t scroll through Instagram and see toys flying, whether they’re superheroes, pterodactyls, space ships, or poor Stormtroopers caught in explosions. At the photography workshop at Bricks Cascade last month, I set up a station with my favorite blue sky backdrop, and a few clear LEGO bars (part number 42445) on alligator clips, hoping that attendees would try their own flying shots. I was right! The station was a big success, attracting even novice photographers.

As I looked through my portfolio, I noticed a trend. Many of my flying shots lack a sense of action or movement. My subjects are often just floating there, projecting a sense of effortlessness in their aerodynamics.

What are YOU looking at? 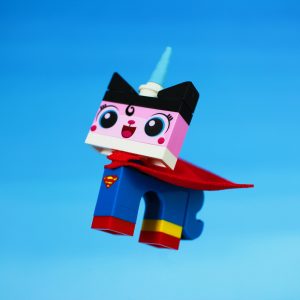 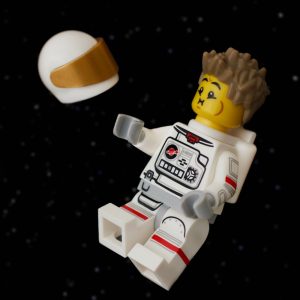 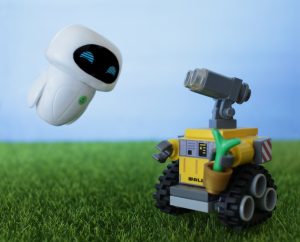 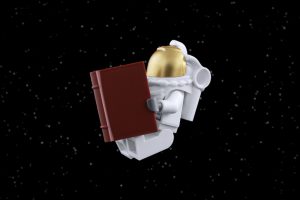 I’m reading a great book about antigravity. It’s impossible to put down! 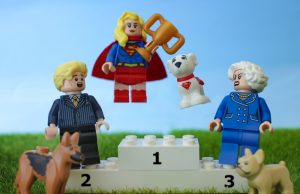 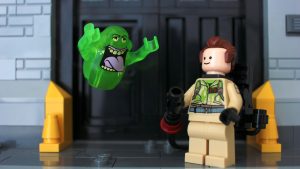 I ain’t afraid of no ghost!

So, is my fascination with flight, or is it simply with floating and weightlessness? I’ve written before about how I like to make things in my scenes just slightly off-kilter or eccentric, and floating LEGO minifigures certainly achieve that effect!

Recently I’ve been experimenting with making my flying shots more elaborate. One of my absolute favorite shots I’ve ever taken took quite a bit of post-processing work and composition in Photoshop. The paper airplane, minifigure, scarf, and handlebars were all real, but everything else was added in later. 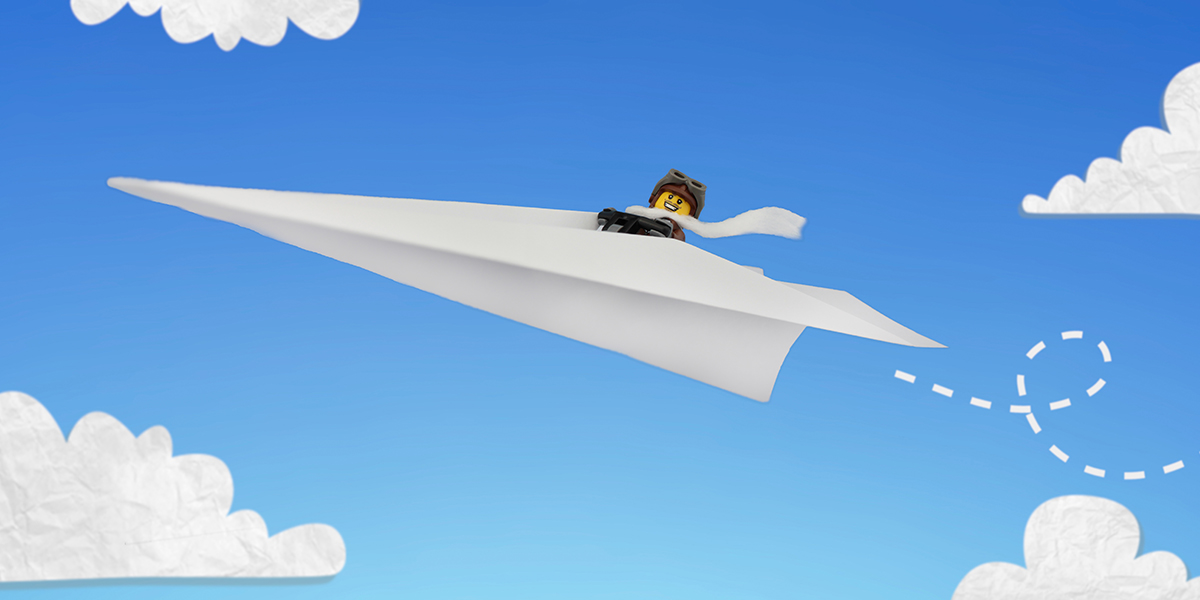 I’ve also been trying to find ways to blur the lines between toy photo and photorealism. I’ve found that adding photorealistic clouds to my go-to blue sky backdrop can bring my shots closer to the Uncanny Valley. 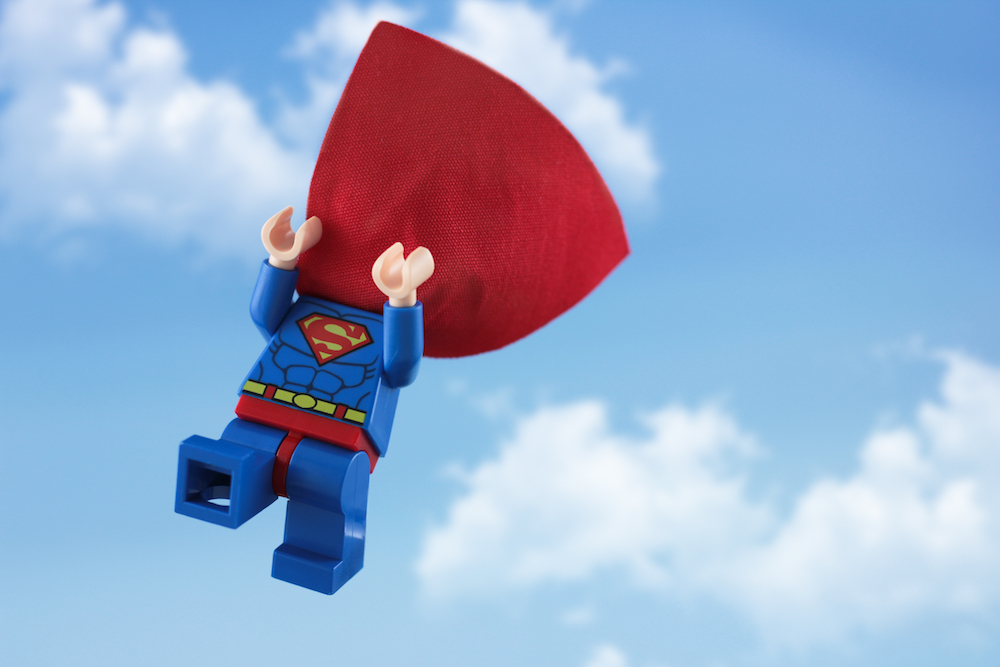 This was inspired by our friend Sunny Ang, who originally captured this shot with a Superman figure. I wanted to see if I could recreate it with LEGO. Thanks for the idea, Sunny!

I’m not 100% sure what it is that drives me to photograph these flying shots. I wouldn’t go as far to say that they’re a trademark of mine, but they are some of my go-to setups and have led to some of my favorite shots. Perhaps it’s the simplicity of sticking my minifigures to wires or attaching them to a clear LEGO bar piece and then removing them in Photoshop. It’s how they do it in the movies, after all!

Have you ever played around with making your toys fly? What are some of your favorite techniques? I’d love to hear them in the comments below!

f you’ve made it this far, come continue the discussion over at our G+ community! While you’re at it, subscribe to our weekly email round up so that you never miss a post, and subscribe to our podcast!