If you fall into the intersection of the Marvel and LEGO venn diagram, then The Hulkbuster: Ultron Edition LEGO set is going to be right up your alley. This is an in-depth review of this unique and epic set.

I must confess, I missed the Marvel universe when I was growing up, and have been deep diving into the MCU (Marvel Cinematic Universe) ever since the first Ironman movie hit the big screen.  When I found out I was getting the chance to review The Hulkbuster: Ultron Edition I got tingles. Now that I have had the set in my possession for several weeks, I still have those tingles.

As always with reviews on this blog, I am going to concentrate on how this set rates from a photography perspective.  However I’ll also touch on the build quality, movie accuracy, and general aesthetics of the set.

So, let’s get down to business, shall we?

Note:  There are two sets that contain a version of the Hulkbuster but they are very different sizes. This review is for the larger Ultron Edition, not the smaller Smash-Up model.

At over 1300 pieces, this is a large set.  The model stands over 9” tall, but is built, appropriately, like a tank. Along with the Hulkbuster itself, it comes with a custom Ironman Mark 43 minifig, a display stand with several robot arms, and a replaceable jackhammer arm attachment.  These extra details add immensely to the sets value.

It is interesting to note that the jackhammer arm attachment actually has a jackhammer effect (made possible by use of an elastic band). This is a cool effect that adds to the playability, but not the photograph-ability.

The display stand also has a large sticker that gives some stats about the suit, very similar to the Ultimate Collector Series sets. This isn’t a UCS as far as I can tell, but it has the build quality and look and feel of those sets.

The model comes with 12 glow-in-the-dark pieces that glow in a blue-white colour very similar to the movie’s rendition of the repulsors in the suit.  It also comes with a LED light-brick to give the ARC-reactor chest piece that characteristic glow. The light is yellow tho, which is a weird choice, however for photographers it hardly matters (as I’ll cover shortly).

The head is a custom printed block, that is hinged to allow the Ironman minifig to sit inside the Hulkbuster. 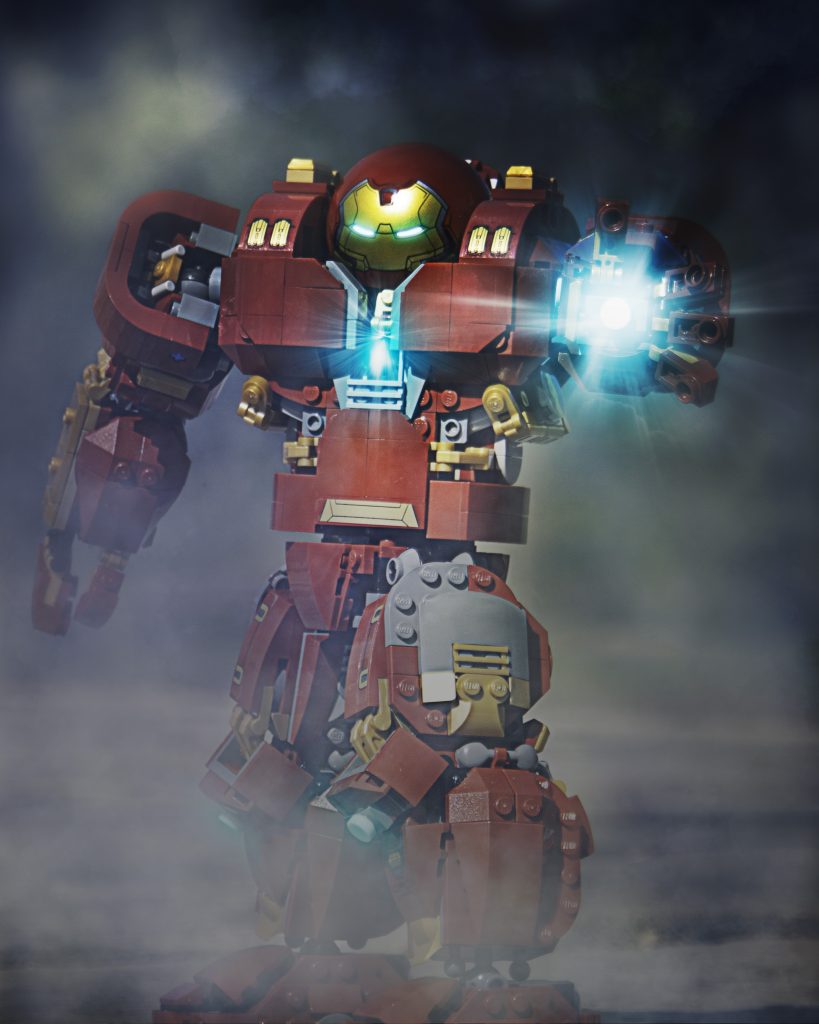 This model is very rugged in the field.  I took it out to several locations, and it performed great.  The only issue I noticed is that the fingers have a tendency to fall off, so keep an eye on those.  Otherwise this is one rugged beast of a model, which is exactly what one would expect from something designed to stop The Hulk, right? Right.

This set is not without its flaws, both from a movie accuracy perspective, and a photographic perspective.

The most glaring from a movie-accurate perspective is the relative size of the model. It is all but impossible to get LEGO models to be super accurate in scale so I’m normally not picky about such things but this model is a whole lot larger than it is depicted in the movies and comics.

The second nitpick is that the ARC reactor light is yellow.  In the MCU that light is a whitish-blue. However, practically speaking, this hardly matters.  The light is activated by pressing a switch in the back of the model, which is spring loaded, so the light is all but impossible to have on during a shot.

Also the light, even if it was the right colour, doesn’t provide that satisfying glow anyway. Since one needs to add more lights in post anyway, it is actually easier to not have the chest light on at all. 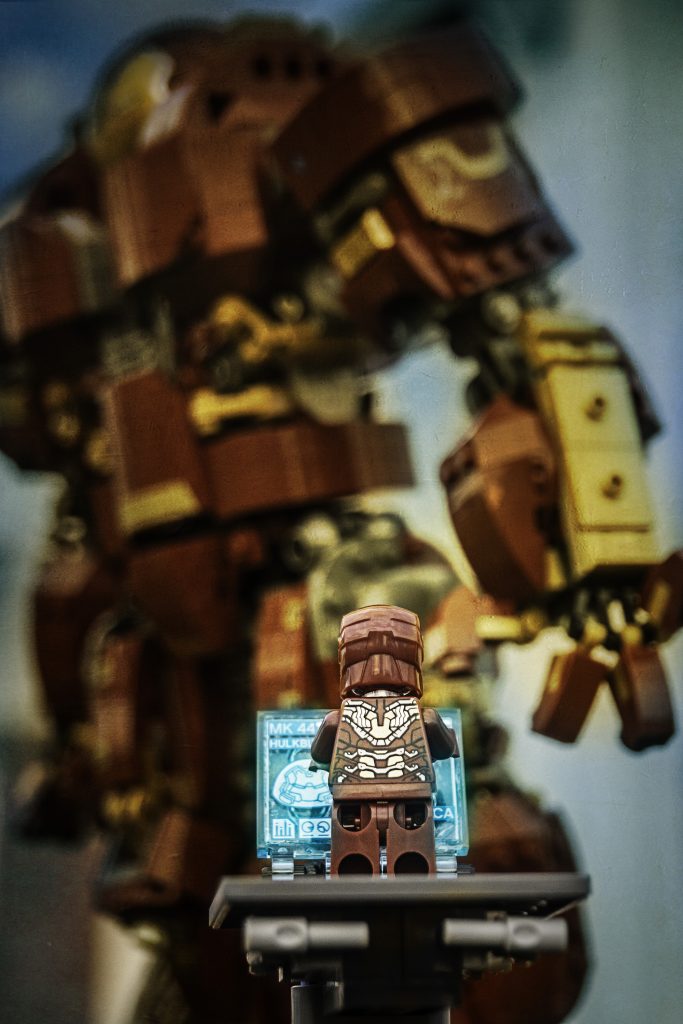 One of the cool things about the Hulkbuster is that it is, basically, an action figure.  This means that articulation becomes an important factor. A side-effect of this is that this set is a great gateway from LEGO to action figure photography (or vice-versa).

For LEGO this model has an impressive amount of articulation, despite the head not moving at all.

The shoulders move pretty much any way you’d need them to move for realistic poses.  The elbows bend approximately 90 degrees, but do not swivel much.  The fingers on the hand all individually move and can go from fully open to a closed fist.

The waist twists a full 360 degrees.  The model is stable regardless of how far the waist turns too, which is nice.

The legs turn outwards (like doing the splits) at the hips, but do not rotate forward or back. Nor do the knees bend. That basically means Hulkbuster can’t be put in a walking or running pose. However the ankles are very flexible, which adds to the stability of the model, as well as selling the realism of the action poses. 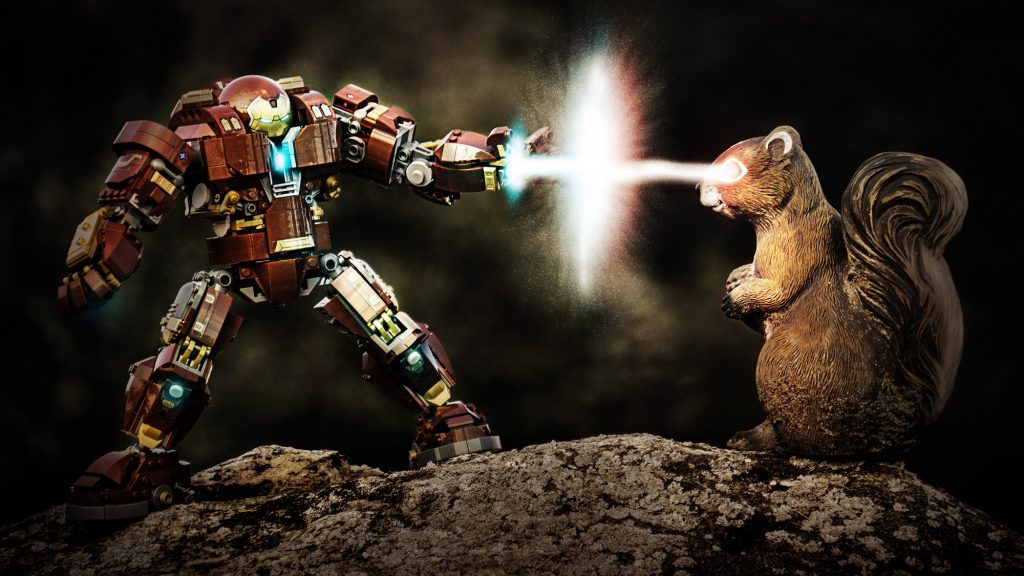 Ironman in the Hulkbuster fights a squirrel. Thats right, a squirrel!

All in all the level of articulation is impressive, and this model can get into poses most LEGO models, and certainly minifigs, simply cannot.

Don’t kid yourself, this model has a whole lot of potential for photographers.  It has enough articulation to get into a lot of action poses. It is a very stable model.  Once you put Hulkbuster in a pose, it barely moves, which is great.

The model does use a lot of SNOT (studs not on top) techniques to get a really awesome humanoid effect with the armor.  Aesthetically this model is stunningly gorgeous.

This is one of the few LEGO models that doesn’t scream “I’m LEGO!” in photographs,  This is mainly due to having very few exposed studs. The fact that the Hulkbuster is a man-made suit of armor also helps.  Aside from a few tell-tale signs at the joints, this could almost pass as a full on sculpted action figure.

I could go on for weeks about the potential for photography with this model.  However I am hoping the images included in this review will fill in the details.  Needless to say the possibilities are wide and varied.

The nature of The Hulkbuster  as a suit of armor lends itself to action shots.  However, surprisingly, the humanoid features of the model can be used for more peaceful shots, like this one: 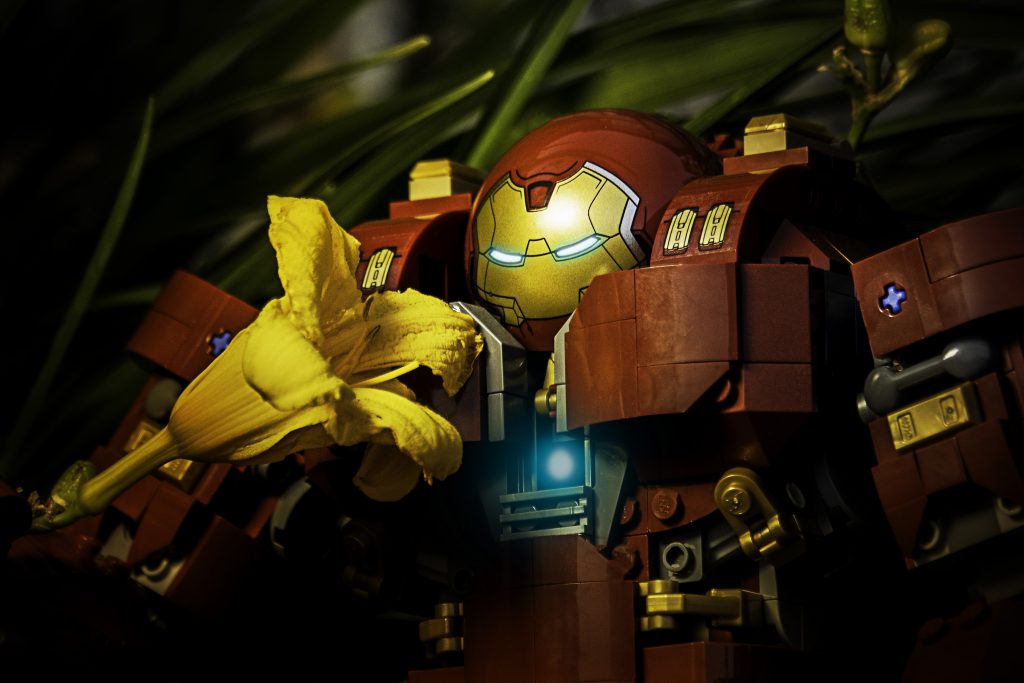 Hulkbuster stops to smell the flowers

The LEGO Group really knocked The Hulkbuster; Ultron Edition out of the park.  It is a very well designed model, great for photography, has oodles of playability. It also looks amazing on display.

Whether you are a LEGO shooter or an action figure shooter, this set would make a great addition to your collection.  I suspect this one is going to be sitting on display in my office for years to come. That is if I can keep it away from my 8 year old son.  (I may have to get a second set – Christmas is coming!)