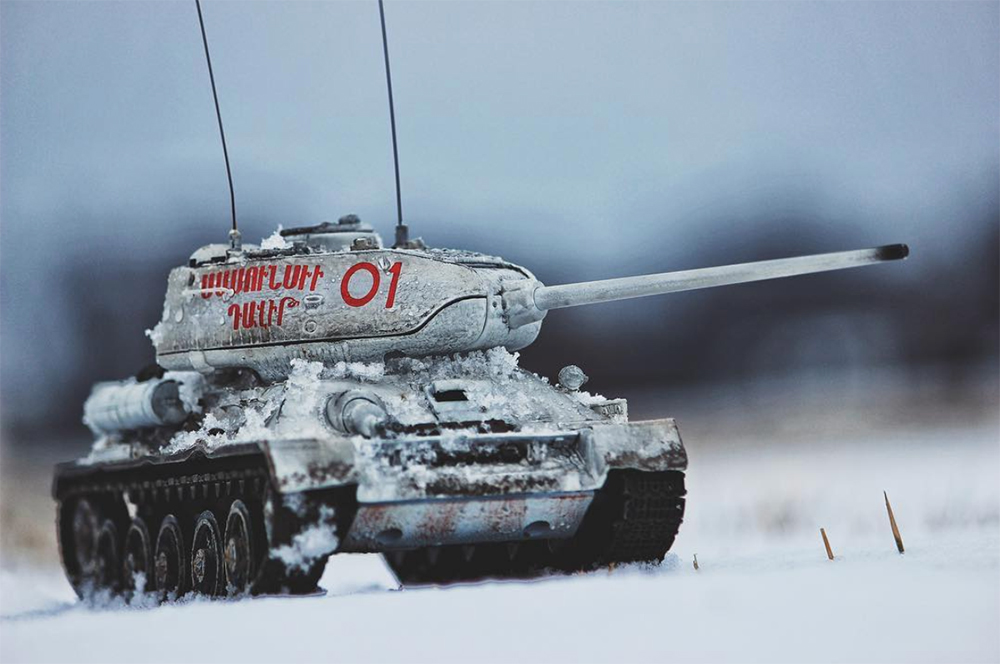 For the longest time I have loved history. Both of my grandfathers had instilled in me at a young age an appreciation for history, and through their stories, books and pictures, I fell in love. Specifically, I fell in love with military history.

The planes, tanks and guns used in war captured my young imagination and I latched onto them. My room as a kid was full of model tanks and planes, and almost all of the books I read were about the technical aspects of war. As I grew older, I realized that not as many people shared my passion for tanks and planes, so I shut it out and kept it a secret.

However, after the death of my paternal grandfather in 2012, I needed an outlet for my grief. That came in the form of making an Instagram profile to simply show off the 1/32 scale miniatures in my Forces of Valor / 21st Century Toys collection to anyone who was interested.

Like all accounts, @fovmodels started small. I knew my posts were “dorky,” so it became a huge secret and I didn’t share anything about it with my friends or family. I used really generic hashtags as well, hoping to capture the attention of collectors like me.

My first couple of posts didn’t do so well, but it didn’t bother me because it was expected. Eventually I started to get more attention when some larger World War II pages started following me and commenting on my posts.

I vividly remember hitting 100 followers in 2013 and thinking, “Well, that’s it! I hit the top.” However, my photos continued to get more likes and @fovmodels gained more traction. Around this time, I began tinkering with my collection of Star Wars action figures, as I had quite a few from when I was a lot younger and collected them before my interest turned to Forces of Valor.

When I first shared the page with friends and family, it was met with mixed enthusiasm. Some loved it, some laughed, and some thought it was weird. I will admit, I struggled with keeping up appearances in high school, so when someone made fun of it I took it personally. I was mocked at football practices and teased, but despite that I continued to post. @fovmodels became what it is today in early 2014 when I started posting short stories to accompany the images.

These stories were almost all made up, and were written on the spot before I posted the image. I never expected to receive such enthusiastic feedback from these short stories, and since then, the words that accompany the images are a staple of what I do on my page.

In addition to the 1/32 scale tanks, those who have been following me on Instagram since the beginning, might remember the years (2016-18) when I began collecting and shooting 1/6 scale Dragon military figures. Unlike the Forces of Valor tanks that required me to tell a story about an entire crew or an individual and their interactions with other members of the armored vehicle, the 1/6 figures gave me the chance to focus on a single soldier and their feelings about a certain experience or topic.

Sadly, I have drifted away from shooting 1/6 figures in recent years, mainly due to the fact that I don’t like reusing the same figure from the same ‘shoot’, thus being limited with what I can do for the short stories.

Creating @fovmodels helped me learn more about myself than any class I took in high school. I learned that writing is something I truly enjoy, and it gave me a unique way to express my feelings without saying them outright—plus going out and taking pictures was therapeutic for me. It helped me deal with the stress of high school and everything accompanying that.

In 2015, I decided to attend North Dakota State University in Fargo, ND to study English. This all stemmed from toy photography and @fovmodels, and it led me to where I am today.

Two years later, in 2017, I was asked to be a part of my friend’s college capstone project. She interviewed me for the project and it allowed me to really dive deep into what @fovmodels meant to me and to others who talked to me about it. You can listen to the interview here.

This also made me realize that my own capstone should focus on toy photography. I had a few avenues I could explore for the project. Similar to my friend’s capstone, I could’ve talked about how toy photography is/was considered to be a niche group, and how it went from being relatively small to becoming a driving force behind action figure sales.

But, as nice and informative as this route was, I knew my project had to focus on some of the photographers who inspired me—all of whom happened to be veterans of various military conflicts from the last 35 years.

My final capstone presentation focused on three toy photographers from Instagram, and it highlighted their military service, life after the military and what made them get into toy photography in the first place. It was extremely interesting to see and hear their stories, and it gave me a much better appreciation for them and what toy photography can mean to people.

For some, it’s nothing but a hobby, and for others it can be viewed as a business venture. However, there are a few out there who have turned to toy photography as a way to escape bad memories or just take a breather from the world. I believe having an outlet like toy photography is one of the best things a person can do for themselves during stressful times.

It has literally changed my life.