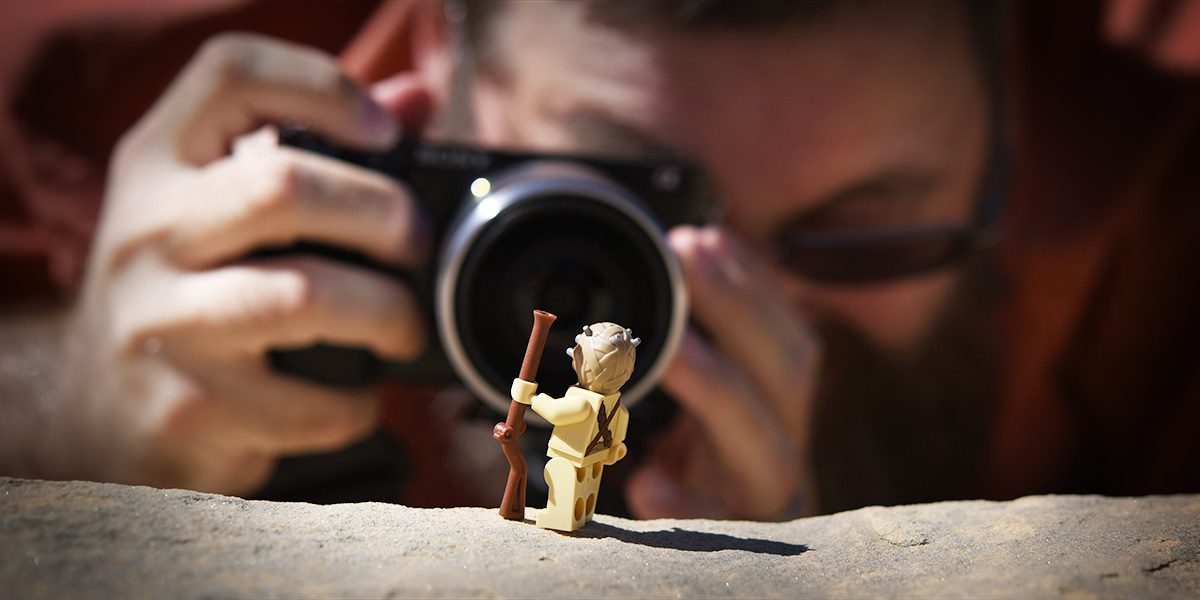 It can be intimidating to create art in public places. It can be doubly difficult when that art is a niche thing like toy photography. This post is about how I gained confidence with shooting toys in public.

If you are like me, the most intimidating aspect is a fear that people around me will question what I am doing, maybe make rude comments, or scoff under their breath. As a grown man, tossing an action figure in front of my lens is not exactly “normal” behavior.

You may not have any issues shooting in public. Not everyone does. However, for those that do, let’s take a deeper look into what’s going on.

Statistically speaking, the number one fear people have is public speaking. The reason for that is being afraid of making a fool of themselves in public. One way to build confidence with this is to simply do it over and over.

The first few times I set up my toys in public I was scared of sticking out and being seen as that weird guy who parents hide their kids from. I was mocked a lot as a kid (high school sucked, y’all), and every time I do public things like give talks I go back to being a kid in high school again.

The same thing happened when I started shooting toys in public. I get a base fear of sticking out and being mocked for it. After a while I got more comfortable. A few experiences helped with that.

I have been fortunate enough to have attended many photographer meet-ups, including a couple Toy Safaris. Let me tell you, the confidence boost gained from being in a pack of 20–30 photographers all doing the same thing is fantastic.

One of the main benefits is you get to hear comments from people passing by. Listening to what folks actually think of our niche hobby can be enlightening.

So, what do they say?

The first time I really shot in public was at the Oregon Toy Safari a few years ago. I set up an action figure on the side of a main path, and many people walked by. All I heard for the 20 minutes I was there was people saying, “Hey, that guy is shooting toys. How cool!” or “That’s neat!” and other variations on that theme.

I don’t know about you, but I am rarely the cool guy in the room. Getting comments like that was like that scene in Shrek where Princess Fiona called Donkey a noble steed. I was a steed! (At least until I put my gear away—then I was just Dave again. So much for “noble steed.”)

I also recall being in Epcot at Disney World. Just passed the entrance, I stopped in front of that big ball. I pulled out Hulk and was setting up a shot. As I was shooting I heard a teenage boy yell out, “Hey Mom! That guy is doing that forced perspective thing!”

No place is more public than the front gate of a Disney theme park, but comments like that made it easy to shoot toys there.

Over and over as I’ve gotten out in public to shoot toys, I’ve received similar comments, and each time I get a little confidence boost. I also get a bit of an ego boost as a bonus.

I have never heard any unkind words directed towards me when I’ve been shooting. Ever.

At the risk of ripping off Nike, the best advice I can give if you have fears of shooting in public is this: Just do it. Bring a friend or two if you need some moral support, but get out there. Experience is a great teacher, and it will likely teach you what it taught me.

Shooting toys is an awesome art form, and having the confidence to engage in that art wherever we wish is wonderful. Even if it’s in a public place.