DUPLO and toy photography isn’t often something that go together.

Most of us LEGO photographers prefer to stick with minifigs. However, I’d been eying up these adorable Jurassic Park DUPLO sets for a few months so when they were half price in my local supermarket, how was I ever going to resist taking them for a spin in front of my camera?

The short answer is that I wasn’t. So here’s my review of how DUPLO dinosaurs perform for a toy photographer.

The two sets I purchased were:

I was obviously not that interested in the non-dinosaur portions of the sets, but not being one to shy away from a photography challenge, I did what I would do with any other set. I took it outside and had a play.

Being aimed at very young children, the sets are mostly large pieces and very vibrantly coloured. Not really that great for detail shots, but they do work as background items.

The tower is configurable in a few different ways. Which is great, because it turns out that these sets did not come with instructions for the build. You can make this tower anyway you like! 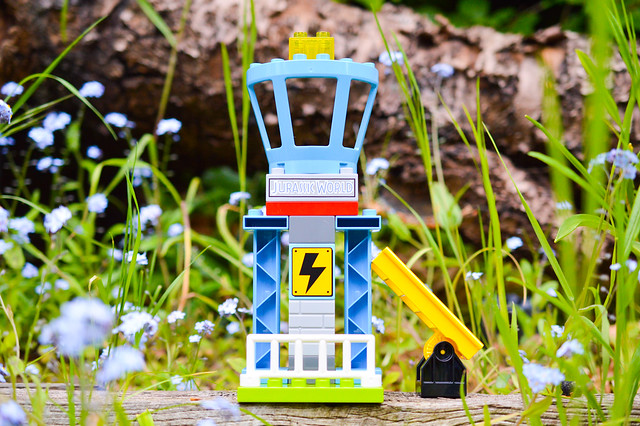 The tower from the T.Rex Tower set.

The petting zoo is a very simple construction with a fence, a bridge and a tree. There’s not really much to this and the star of the show is very much those two baby dinosaurs. 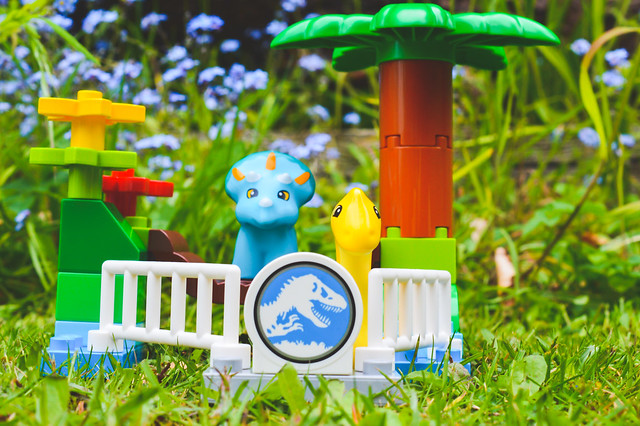 And possibly the Gray Mitchell figure. 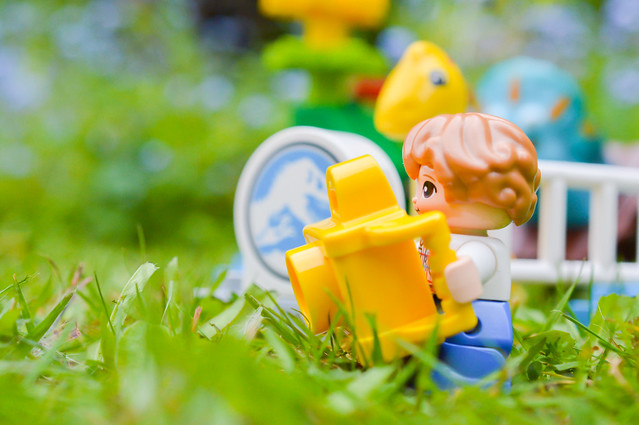 Isn’t he so cute! 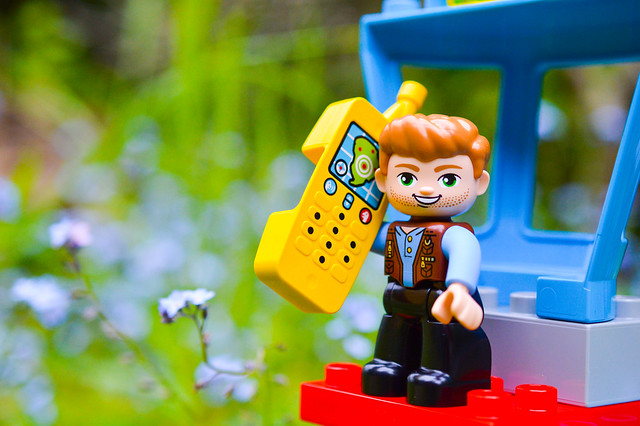 I actually find the DUPLO figures to be quite charming to photograph. Of course, they don’t have all the movement of a LEGO minifigure (who would ever think that would be a thing said), but the printing on them is superb and they look cute! There’s much more of a human face on the figures, with ears and a nose! The older one even has fingers if you look closely!

The other part of the T. Rex tower is that the set comes with a car. Not much building required, you simply add the top and off you go! Of course, considering how much it was raining, a little more construction to include a roof might have gone down well! 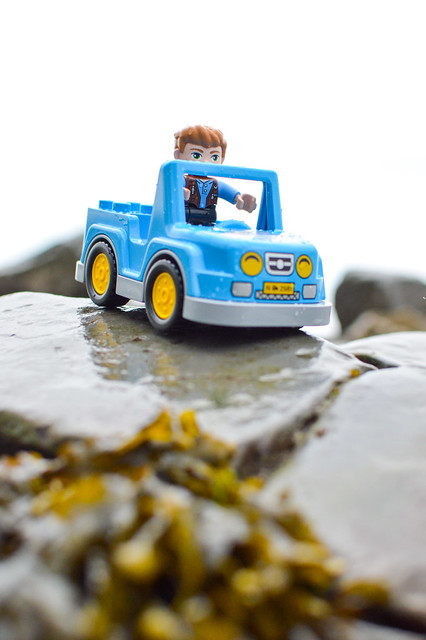 One little thing to note about these DUPLO sets – NO STICKERS! I repeat – there were no stickers! For little kids, stickers were going to be too much I guess, but I loved the fact that none of the decoration had to be added by me and my wonky sticking capabilities. This also meant that taking the sets to the beach in a rain storm had no damaging effects.

Alright, alright. That’s quite enough of those bits of the sets. Let’s move onto the stars of the show. The dinos.

Rexy is a bright orange, pre-assembled mammoth dinosaur! Towering above the rest of the gang, he’s very much a misunderstood pre-historic friend. He’s all teeth, and no bite though! Promise! Come say hi! 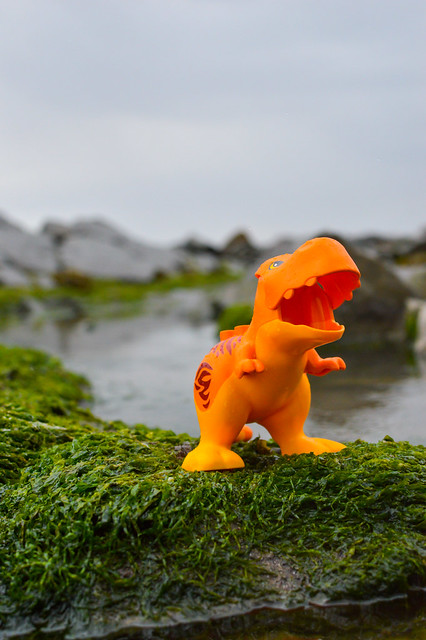 RAWR means I love you in dinosaur!

Whilst not really poseable at all, his mouth does open and close. He can’t hold anything either, except in his mouth, so there’s not much scope for doing anything other than posing him in an appropriate location. Not that it’s bad though. His colour really does pop when you take him into a natural landscape! 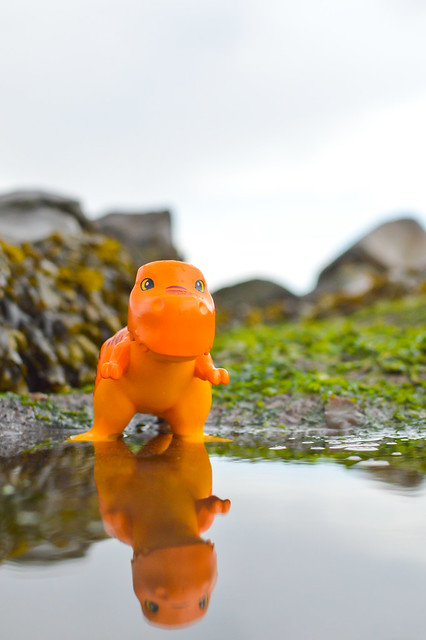 Look how cute I am. The perfect orange rex in town!

Obviously, the baby dinosaurs in the petting zoo are much smaller than T. Rex. That doesn’t stop them from being even more adorable to photograph! Look just how expressive their eyes are. 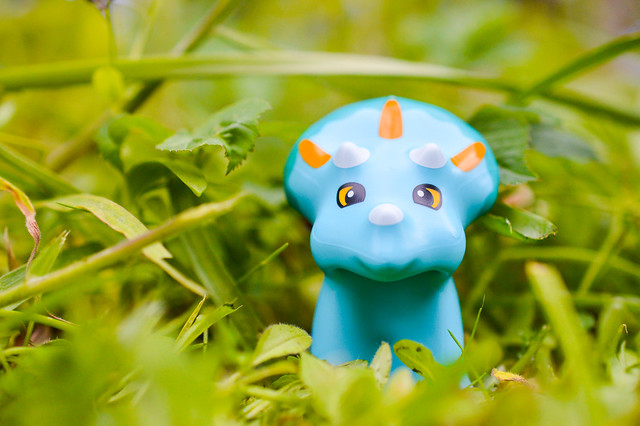 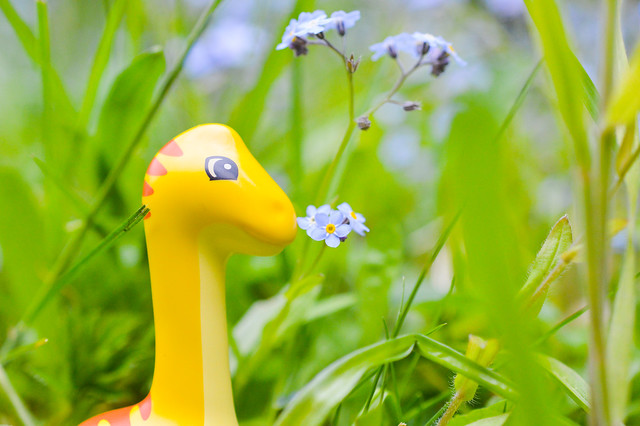 They also got a chance to go explore the beach. I pretty much fell in love with them in the rock pools of the beach we visited! Again, not being poseable, there are limits on what you can do with them but the vibrant colours of the dinosaurs really make them look fantastic in photos! 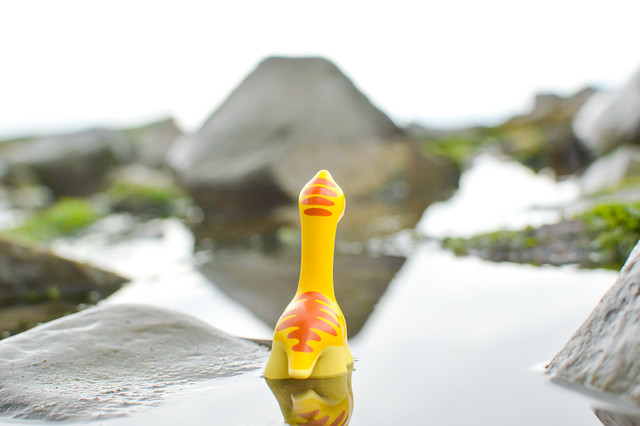 Dip, dip, dip in the puddle. 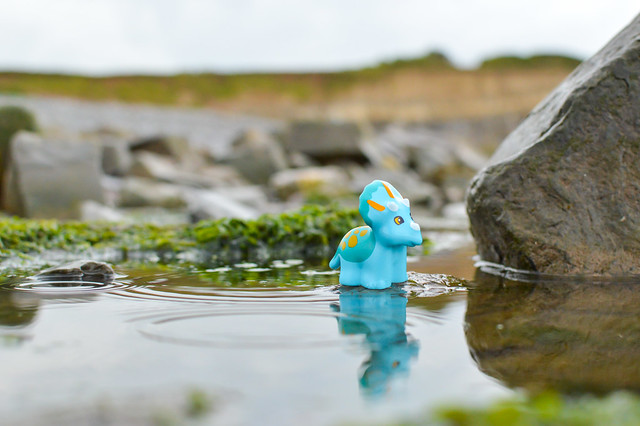 It’s a land before time at the beach!

In conclusion, I regret not buying this set sooner! These dinosaurs are absolutely adorable! Much cuter than the more grown up dinosaurs from the regular LEGO range of Jurassic Park sets! They heavily appeal to my wish for cute toys to photograph and I will definitely be taking them out and about with me more often, particularly when there are some nice vistas to photograph them in! In terms of the rest of the sets, I think they will probably head off to a child somewhere as I’m sure the pieces can be put to better use than getting dusty on my sideboard!

Do you have any DUPLO sets that you photograph? Or are you happy sticking to the more grown up LEGO sets? Let me know in the comments!