A Glance Through the Eye of a Lensbaby

I think most people that know me, or are familiar with my work, probably know that I don’t really consider myself so much of a photographer as much as I do a digital artist that uses the photos I take as sort of canvas to create my work upon.

This comes out of my daily life/job where I spend most of my days diving deep into programs like Photoshop, Illustrator and the rest of the Adobe Suite.  So when the opportunity arose to try out a kit like the Lensbaby I didn’t really jump at the chance… at first.

You see, I had never heard of the Lensbaby until a few weeks ago, so after I did a bit of asking around I learned what it was capable of and I found myself thinking- well I can do that kind of thing in post in a program like Photoshop, can’t I? And after trying out the lens, I was right, I can- however that’s not really the point.

You see, I was scrolling Instagram when I came upon one of Shelly’s photos (@shellycorbettphotography) and the scene had a sort of surreal focus to it, the right side where the character was standing was clear and in focus and radiating outward from that space was sort of a twisted otherworldly focal blur. Knowing that she used the lens baby for this it instantly got me thinking about a ideas I could try that would utilize this sort of effect. I was out of my normal studio without access to my editing system at home, so the idea that could add some effects without having to open an editing program in post was alluring to me. I had been shooting a 1/6th scale figure of Obi Wan Kenobi earlier that day, and I thought to myself, how cool would it be to try to emulate the look of a force push which using the Lensbaby kit?  So with a Lensbaby in hand, I set out to try to capture the mysticism of a Jedi.

Shelly helped start me off on my brief Lensbaby journey with a Composer lens housing and a ‘Sweet 50mm optic’. This took a second of getting used to, as for the most part with my toy photography I shoot with a 90mm macro lens and it had been a while since I used a 50mm to capture my figures (and even when I do use a different focal length its mostly with a 35mm full frame lens). To further complicate trying out the new lens was that the Lensbaby didn’t work like any lens I had used on my Sony a7rII before- it’s a fully manual lens, which in this instance meant no aperture control (which I learned later that the aperture control is actually dictated by these little magnetic rings you attach to the composer- but for my brief trial of the lens, this wasn’t too much of a concern point for me). So, going in to shoot my Obi Wan’s force power display, I was starting in the virtual low ground and it seemed like it was going to be an uphill battle to get the shot I wanted.

One of the coolest things about the Lensbaby right off the bat is the control you have over the front part of the composer’s lens.  It actually lives on a pivot housing which allows you to simultaneously line up the composition for the shot you like, and then rotate/pivot the front part of the lens within the composed frame to adjust the spot you want to draw the focus to.  For the shot I had in mind, the focal spot would be Obi Wan’s hand. 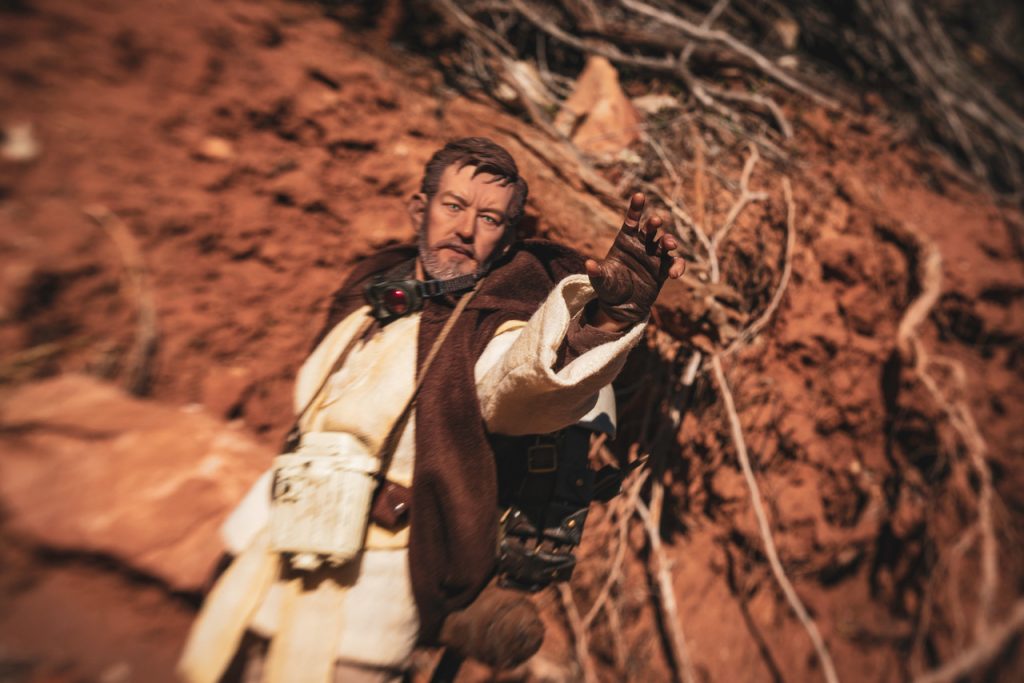 For my first shot attempt with the Lensbaby, I’d say overall it wasn’t bad- but it was a far cry from the vision I had for the shot. This was mainly because I wanted the hand itself to dominate the scene. I was getting way too much background, and too much Kenobi for my liking.  Clearly the focal length I was shooting at wasn’t right for this, and also where was that twist effect I was hoping to see? I did get an overall nice even draw to the hand that became more distorted the further you got await from the focal point, so it was obvious to see the Lensbaby’s work in action. But it wasn’t enough!

After talking to Shelly more about my desired end result after failing upon my first attempt, she helped me get closer to what I was looking for.  This time instead of the Sweet 50mm, I shot with a Twist 60mm Optic attached to a Macro converter.

Ahh the sweetness of a 60mm macro, now this was a focal length I was VERY familiar with.  Before switching to a Sony mirrorless camera and the 90mm lens a few months ago, I had been shooting with my old tried and true Canon DSLR with a Canon 60mm macro lens. So something about this set up, seemed like ‘coming home’ to me. I should also mention that the swapping out of the two optics and adding in the macro converter was as easy as putting a lens cap back on your camera.  It genuinely surprised me at how quick and effortless that process was, and if you’re anything like me you get a small tinge of existential dread every time you change a lens while out on a shoot- since who knows what can go wrong or what errant wayward dust particle might fly into your camera body upon the swap, but much to my delight, the swap was so smooth, there was no dread to be found.

After an easy lens swap, I returned to my setup of the crazy old wizard. Looking through the viewfinder and lining up the composition I intended on capturing from the get-go, I began to snap away. 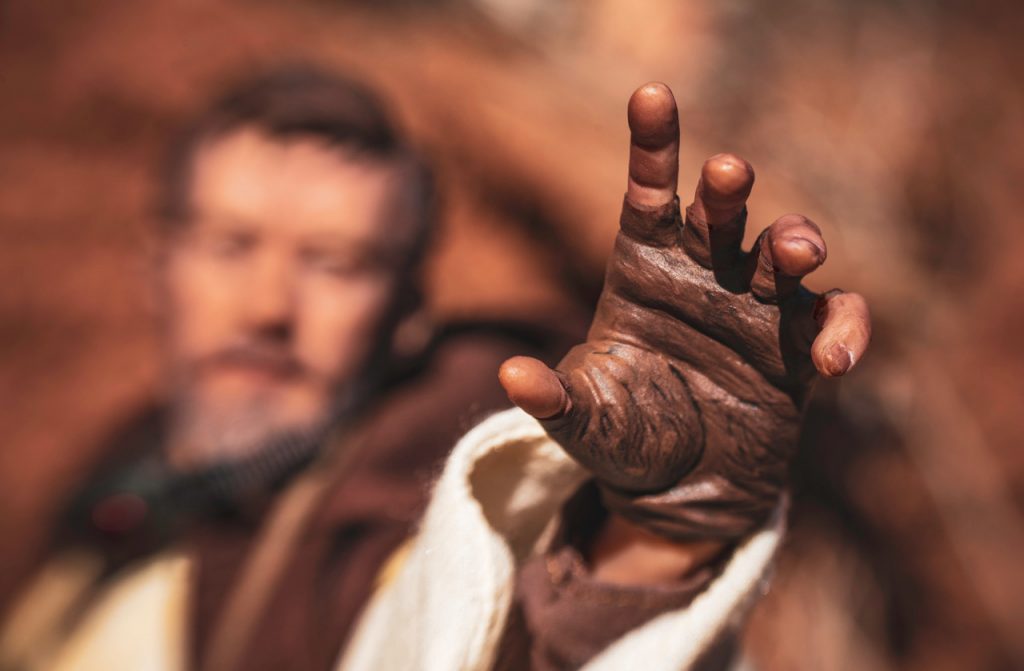 Now THIS was the composition I was looking for! The eye gets drawn right Obi Wan’s hand, and the Jedi master himself is still recognizable, but blurred beautifully in the background.  Seeing this lined up in the lens made me feel like I got everything I was looking for, it was only afterwards when I loaded this on to my tablet that I realized the ‘twist’ I had originally set out to try to shoot was nowhere to be found.  Perhaps a misuse of the lens on my part, or something I neglected to do, but it felt like I had it working when I was looking through the view finder.  It was a very swift trial of the Lensbaby kit however, the sun was beginning to dip below the canyon we were shooting in and it was after a long day of hiking and picture taking and fatigue was beginning to set in, so I hardly think it’s the fault of the lens that I was unable to achieve the effect.

In terms of pure photography, I’m quite happy with the shots I got out of the Lensbaby system.  The quality and clarity of the photos were surprisingly nice to me and the bokeh blur on my second shot was extremely smooth and quite pleasing to the eye.  I think for a photographer on the go looking to do as much ‘in-camera’ as possible, or those that aren’t as comfortable in a photo editing suite such as Photoshop, the Lensbaby kit system is a great way to add some great visual effects to the images you capture. Whether or not it will work for me and my style of shooting has yet to be seen, but I enjoyed my time out with the kit and I would look fondly upon attaching the Lensbaby composer to my camera again and trying out the various optics and attachments they have available.

About the Author: Tom DiGrazia