The Curse of the TV Head

As I write this post we are just over a week away from the 2019 U.S. Toy-Photographers Meetup and one question has stuck with me the whole year.  How can we top the 2018 Oregon Safari?

Brett Wilson is not going to bring me Tim-Tams. I’m not going to be in an Rental House that overlooks the Pacific Ocean.  I’m not going to have lush-green forests to photograph in. And worse yet, 2018 had the most well-received Commemorative Minifigure to date! I have never received so many “where can I get one of those?” comments in all my five-years of making these CMFs.

In the past, I have keep The Minifigure exclusive to The Meet-up. Never to be made again. It was delightfully-obvious from an early date that I could not keep the little TV heads under wraps. So with the success of the TV Head, and my drive to continually one-up myself, I knew that the 2019 Minifigure was going to be an uphill battle.   Combine that with having no direction leaving the meet last year and panic mode set in early.

This year was the year of the prototypes. Three figures made it to this stage. First was a Koala Head that was given to me from The Legend himself, Tony T. The head scaled to Lego perfectly and the cuteness of this head on a Lego Minifigure sent the dial to 11. But casting Koala heads proved problematic and with the quantity that I needed to produce (along with my personal quality standards) the little bugger was eventually scrapped as an Idea.

The second prototype was a lightbulb head. This one actually made it into the hands of some Seattle Photographers; However, after some discussion, the scale and quality that we wanted to produce was just not there at the time we needed to start production.

Deflated, I began to look for another plan.  Nothing. Weeks, became months. Months became years.  Years became decades…..ok….maybe a little over dramatic here but I hit a wall. My desire to one-up the TV Head from 2018 proved to be giving me artist block. Fortunately, inspiration comes when you least expect it. Like standing in the checkout line at a hardware store!

Out of the corner of my eye, I saw a socket extension set. I had seen them once before and thought to myself “That could make a cool head” but never bought them to try out.  It felt like destiny the second time they caught my eye. As if these little socket guys screamed out “hey, remember me?” and I had no other way to respond than “Yes, I do”.

That same day, I whipped up a quick silicone mold. An hour later, came the resin.  Then paint. Then…screws….and an electronic resistor?! Yes! It’s…..alive!!!!! I knew after that one-day-build that I was looking at the 2019 Toy Photographers Meetup Minifigure. 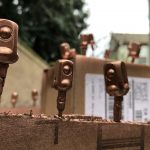 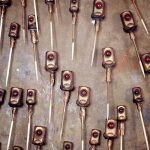 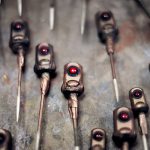 And so, it is without further adieu, that I give to you this years Minifigure!  Like all Meetup Minifigures, they have no names. No identity. No backstory whatsoever.  That, I will leave to you!

If you would like to see the process video, check out the making of video below.

Stay safe and I hope to see most of you in Utah next week!

Will you be in Utah next week? There are a couple of spaces still left in the house if you want to join us. We always have room for one more! ~ Shelly