I’ve been on a big Incredible Hulk kick lately, which surprises me as I normally am not that much of a fan of the Hulkster.  However he seems to be tickling my muse, so I am running with it.  I recently watched Thor Ragnarok with my son, and I was thereby inspired to get a Ragnarok version of the Hulk.

Unfortunately my action figure line of choice, Marvel Legends, doesn’t have a Ragnarok Hulk.  It only comes as a Build-A-Figure.  The Build-A-Figure is a marketing scam where the parts for an action figure are spread out in the packaging for 6 other figures.

So, step one; collect those 6 figures! To amazon.com!

Thanks to the magic of blogging, those figures were magically transported thru the meta-verse from the Amazon warehouse to my studio. This means I don’t need to make you all wait for the packages to arrive. Convenient eh?  These are the figures:

These are the Build-A-Figure action figures I needed to build Hulk: Thor, Girl Thor, Hela, Loki, and two Asgard warriors.

Now all I need to do is crack open the packaging for 6 whole figures, retrieve the bits for the Hulk figure and assemble them.  Easy peasy.  However not very exciting, so I decided to outsource it to my trusty LEGO construction crew.  They helped me build the Millennium Falcon, so they are likely looking for more work.

The first step is to open up the packaging and retrieve the parts to assemble the Hulk. So I sent in a worker with a saw. 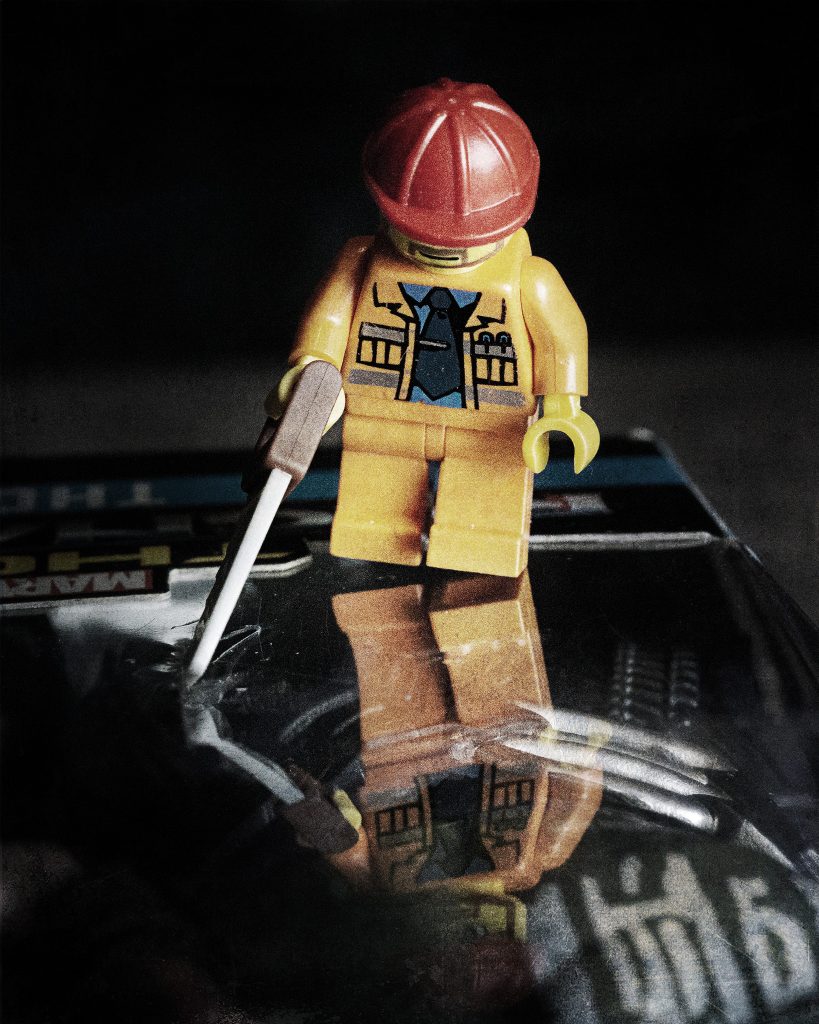 Cutting into packaging with a handsaw.

As anyone who has ever opened retail packaging knows, getting into them is trickier that it first appears.  It may not be surprising but the hand saw was not effective, so we brought in More Power.TM 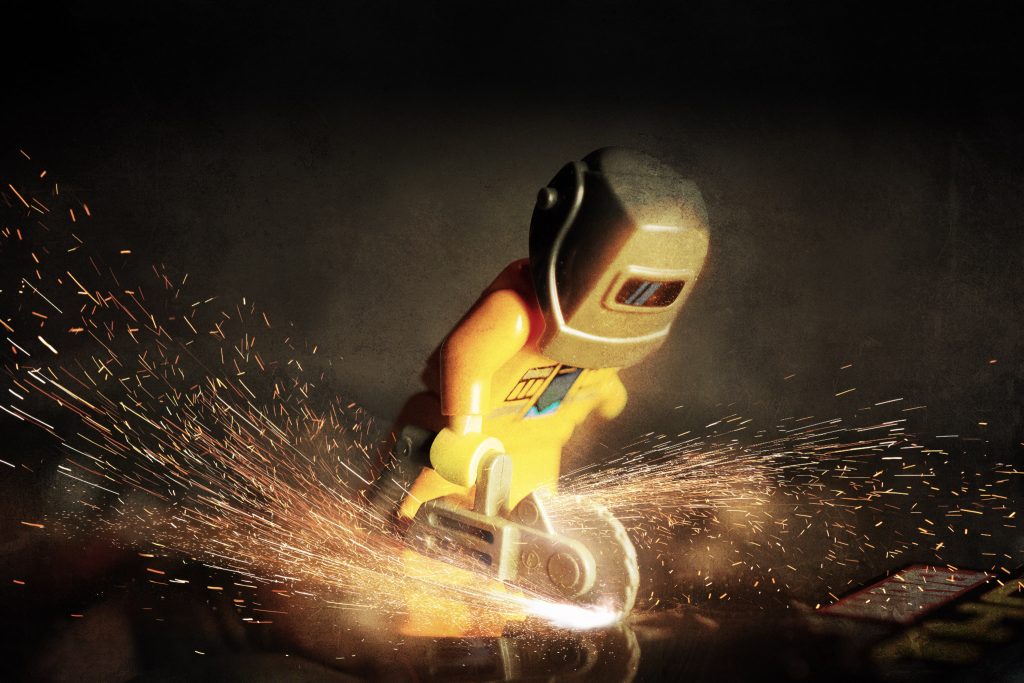 The power saw made short work of the Hulk packaging.

Once the packaging was open, heavy cranes are brought in to lift the Hulk parts free. 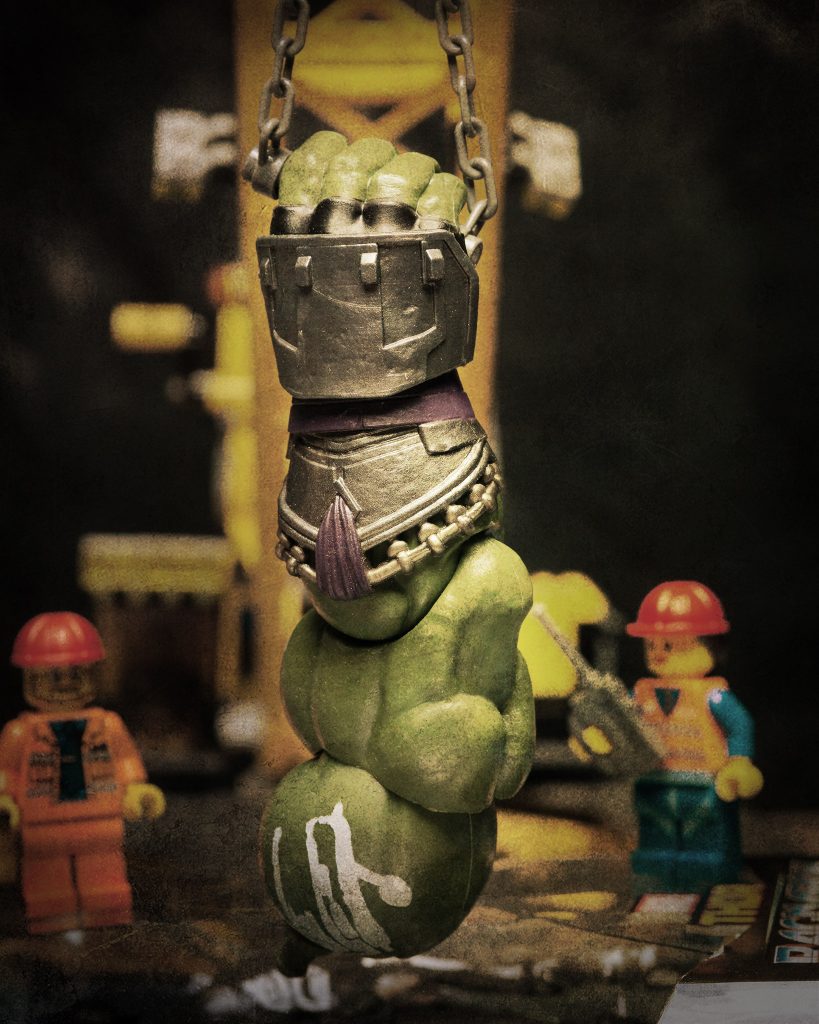 Hulks arm being freed from the packaging.

The crew got to work assembling the parts of the Hulk.  It is very Frankensteinian, a little gruesome, and surprisingly photogenic.  To protect our more sensitive readers, I am going to skip over the more disturbing photos, and stick to the PG ones.

Constructing a monster has some surprising moments, to be honest.  For example, a little known fact that Hulk ear canals are full of ear wax for protection during transportation.  So one of the steps is to clear out Hulk-strength ear wax.  It requires a jackhammer. 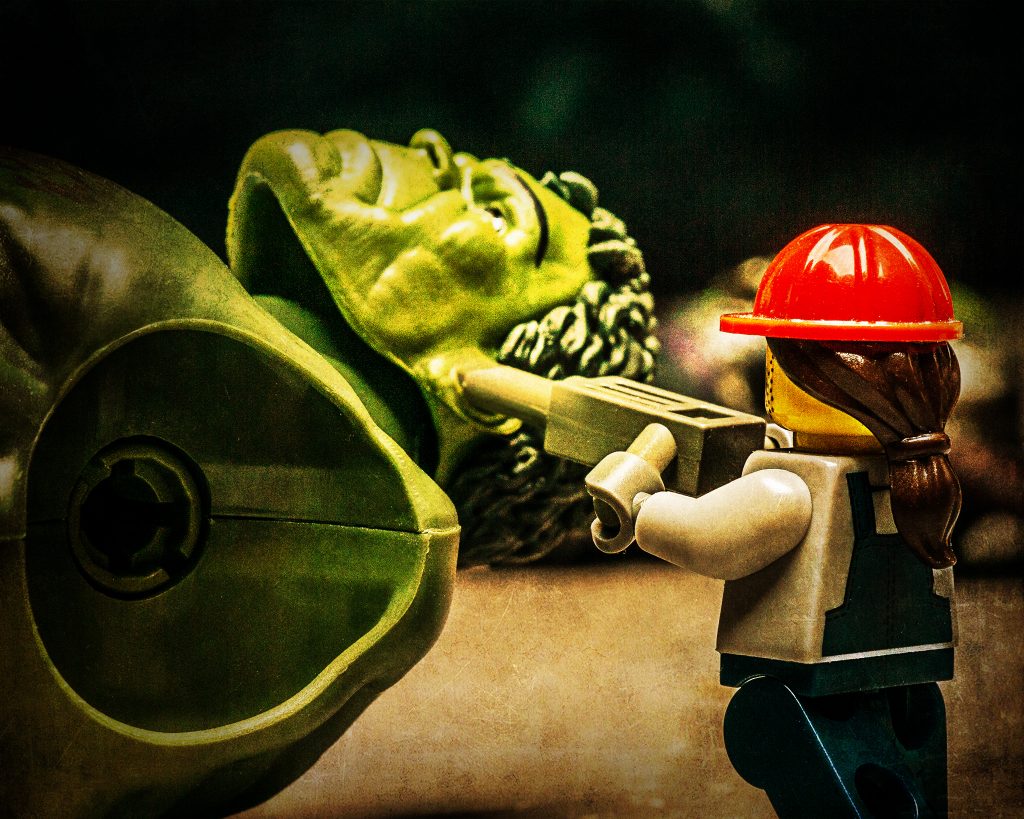 The Hulk from Ragnarok is a gladiator, so he comes with armor.  Putting on his helmet was a two person job, even then it required overtime.  The union steward was not pleased. 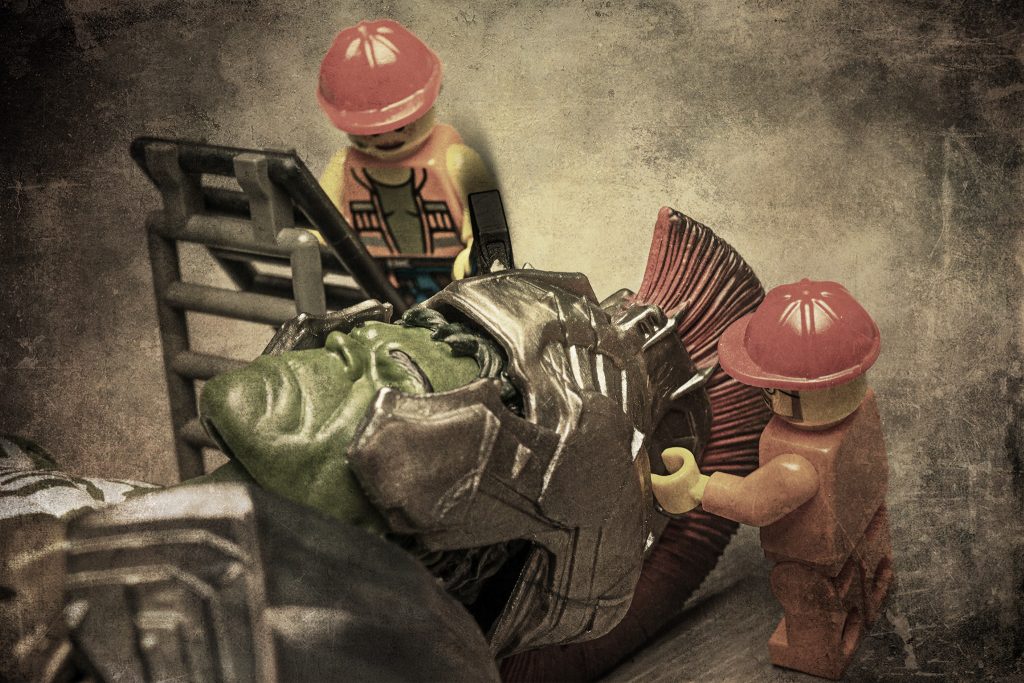 Putting on Hulks helmet is a two person job 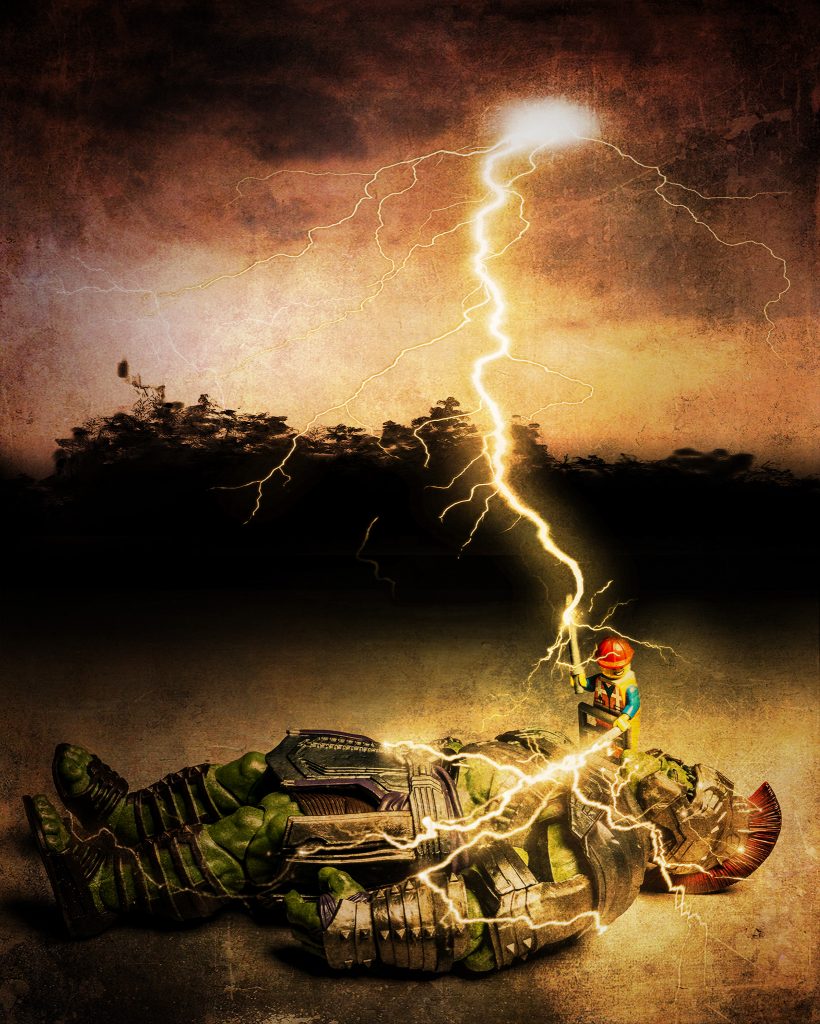 Bringing life to Hulk via the power of lightning.

It was a rousing success, but at this point, as you can imagine, we lost control.

The moment that lightning bolt hit Hulk, he woke up, tossed the worker off (don’t worry, I offer an excellent health benefits package), and ran off in search of bad guys to smash. 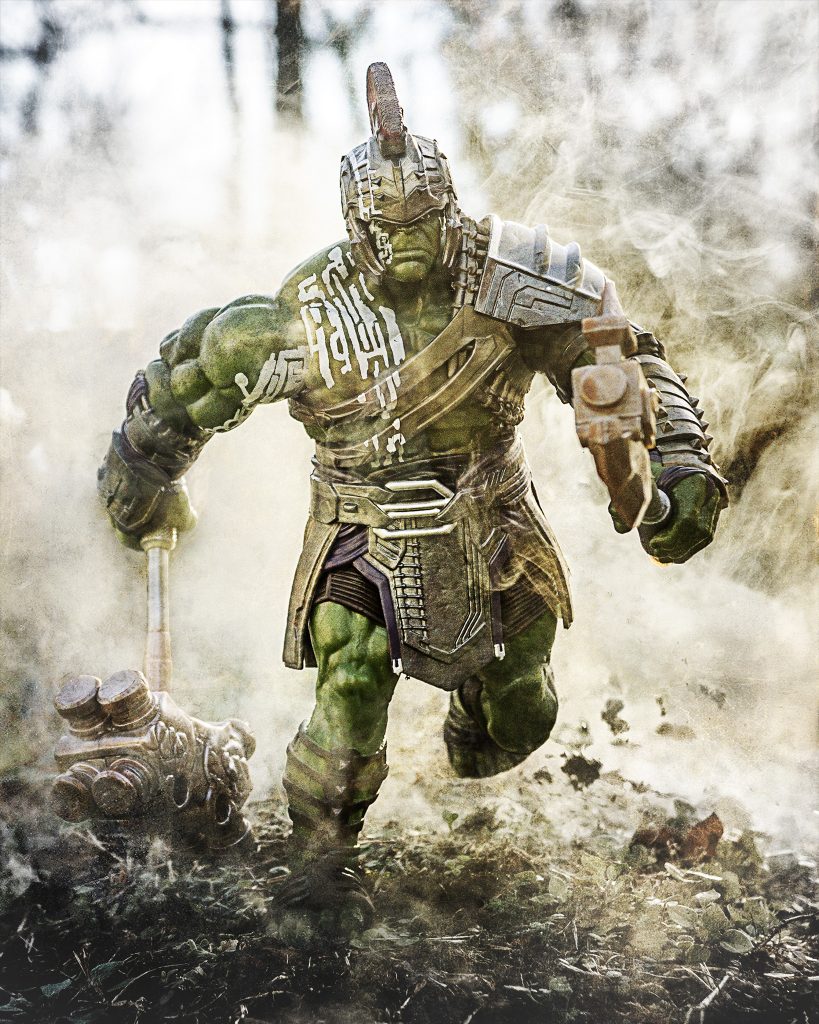 I haven’t seen him since.

Not all photography projects end up going to plan.

Want more toy photography goodness? Subscribe to our weekly email round up so that you never miss a post, and find previous episodes of the podcast!