3 Ways to Fight the Pitfalls of Toy Collecting

I know what you’re thinking. “The pitfalls of toy collecting?! There are no pitfalls, because toy collecting is awesome in every way!”

Hang on, put down your pitchforks and tar. Hear me out.

As toy photographers, we need toys to photograph. Whether we consider ourselves “collectors” or not, if we continue this hobby it’s almost inevitable that we will accumulate toys. This accumulation can affect our bank accounts. When I first started taking photos of my son’s Legos, I never anticipated the expenses that would come with such an innocent hobby.

Tell me if this sounds familiar. It’s the beginning of the month and you know you’ve got money in the budget tagged for “fun stuff” like going to the movies, buying toys and books, eating out. You’re at a store and decide to breeze down the toy aisle in case there are any good deals. Sure enough, a toy you’ve been wanting is on sale. You snag it for $12 instead of $18. This feels good, because you saved $6 and got a toy that was on your list.

Then you take a few photos, drop some hashtags on them, and while browsing the hashtags and viewing others’ photos of that same figure, you see how well it goes with two other characters. After all, what’s Han Solo without Lando and Chewie? If you had all three, just think of the fun scenarios you could shoot. You hop on Amazon.com and order them. Free two-day shipping, after all.

Later that week, someone on Instagram is letting go of their entire Marvel Legends line, and there’s a chance to get the Rocket and Groot that match the Star-Lord you just picked up. Adult Groot is a Build-A-Figure, and getting both he and Rocket for $40 (including shipping!) is a steal. Good thing you saw that post! 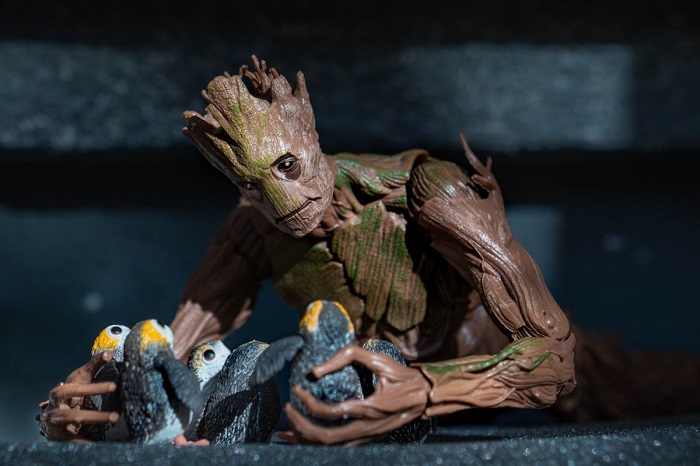 “That’s probably enough toy buying for now,” you think. But then a friend tags you in a post, and someone is selling their Black Series 6” original trilogy Obi-Wan for only $16 (including shipping!). How can you pass that up?

Meanwhile you’re organizing your toys for an outing with the family and realize your Legos are getting out of hand. You really need a better way to transport them. Didn’t you see someone at the last toy photo meetup who had a cool storage container? Maybe you can find it on Amazon. Then you’d have all your Legos in one easy-to-carry box. Sure enough, Amazon has that exact box for only $19.99. It’s a good long-term investment, and will serve you for years. Worth it.

That’s halfway to a Hot Toys Ant-Man or Superman! Not to mention, it’s over the $100 limit you’d had in mind for monthly toy expenses.

And there’s still 11 days left in the month.

(The scenario above may or may not have been based on a true story. Shout-out to @toybills and @bobasaurusfett for some great deals!)

This sort of thing happens because each transaction seems reasonable on its own. Each purchase is a “good deal” or less than $20. If you find yourself falling into this trap month after month, spending more on toys than you realized or intended, a good strategy is as simple as a sticky note. Whether physical or digital, put a note somewhere that’s easy to update and easy to see. Write the current month at the top. Every time you make a toy purchase, jot down the amount.
Many times, staying aware of the money you’ve spent is enough to stay on track. 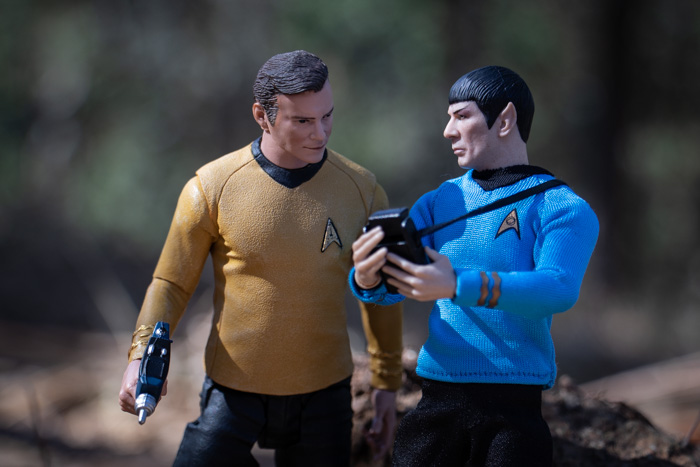 Kirk is astounded that he already spent that much on toys this month.

You may have noticed in the example above that I’m assuming you have a budget for toys. It’s possible that you don’t budget at all. That’s fine; whatever works for you. But if you’re realizing that toys are accumulating faster than you can photograph them, or month after month you’re regretting the money you spent on toys, then implementing a simple limit may help.

Decide how much you would be comfortable spending each month on toys. Make a list of toys that you’d like to acquire. Now you know how many you want to buy, but don’t buy all the toys you could right away. Expect that some opportunities will pop up that you didn’t anticipate, and set aside part of your toy budget for those impulse buys.

If you have spent all your toy budget and a great deal comes along, try reminding yourself that there will be other opportunities. Especially if it isn’t even a toy that was on your list!

While very similar to the impulse buy, toy envy is its own animal. There are a lot of reasons we might see another’s toy and wish we had it, but most of the time it’s very much a Darth Sidious situation. “If I only had that toy, I’d have the power to save Padme!” Er, I mean, “If I had that toy, my photos would look as awesome as those are.”

Whether it’s because we think a new toy will help us overcome boredom with our current collection, or the illusion that a new toy will magically improve our photography skills, toy envy is 99% baloney. The infatuated joy of a new toy rarely lasts. Whatever we lack in imagination or skill will still be lacking once the honeymoon is over. 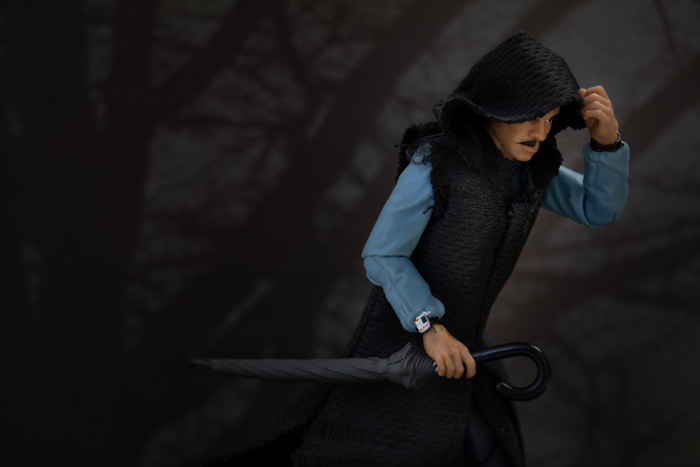 A neglected Black Series figure disguises himself and slips away into the night. “It’s obvious now they only wanted me for my accessories.”

If you know another toy photographer who lives nearby, a sneaky trick you can use to beat toy envy is to borrow the toys you wish you had. Organize a toy photo meetup and Be a Borrower. But if this isn’t an option, I have a couple other tips.

Occasional bouts of toy envy can be beaten by putting the toy on your wishlist, telling yourself you’ll certainly buy it someday, and then waiting for the feeling to fade. Probably 75% of the toys I put on my list, I don’t care about two months later. The 25% that I still want are the ones that actually belong in my collection.

Chronic toy envy, the kind that imagines the toys will fix problems like photo block or lack of skill, needs to be handled with a generous dose of “Wake the heck up” and “Just do the work, dude.” Or maybe a bit of “Let it go, let it go”, a la Frozen.

There are some great articles here on overcoming photography block, so try some of those tactics (Brick Block and What to Photograph). I’ve seen people who do amazing things with a very limited set of toys, so more toys is not the only answer. When you’re feeling creative and have lots of ideas, put them in an idea folder like Dave (@TheRealStudioDave) does. Then, when you’re feeling stuck, you can look through those for inspiration.

If there’s a photographer whose work you aspire to, you’ll probably need to get out of your comfort zone to get there. Invest your money in a different camera instead of new toys. Try better lighting, different angles, or study their compositions. Explore different settings on your phone or camera, and push the limits of what’s possible with your device. Find some free photography tutorials on YouTube and try some of the techniques. Many times this has helped me discover things about photography that I didn’t even know enough to ask about that really made a difference. If you want your pictures to look different, you’ll need to try different things to make it happen.

As time goes by and you use the toys you already have in new ways, you should find that toy envy ebbs away to the occasional pang. 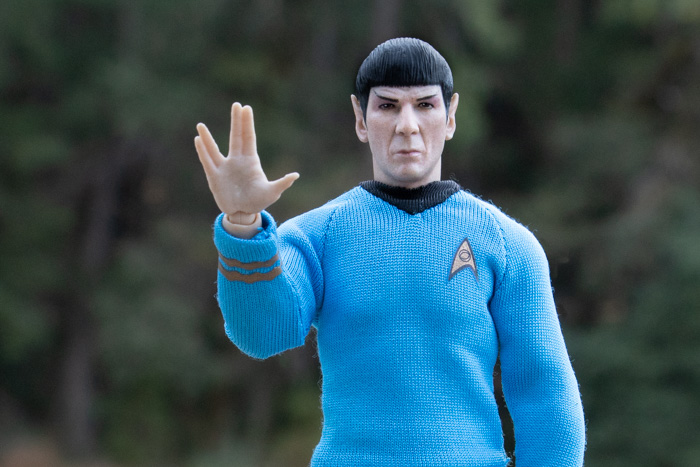 Spock says, “Go forth and prosper in toy collecting.” (Spock borrowed from @krash_override during a meetup.)

What are your best tips for avoiding toy collecting pitfalls?