How can you tell if an image you create is quality? One Image; Two Reflections is an attempt to show how two different artists view the same image and judge its merits.

The origins of this idea stem from the monthly podcast that Kristina and James create. If you’re not familiar with the process, they choose a subject, they each take a photo representing that topic and then they discuss their images and how they relate to the topic. They also talk about images that are submitted by community members. I find these conversations fascinating and stimulating. They’re an opportunity to take a refreshingly deep dive into a photo that we don’t experience on any social media platform. Our conversations are often limited to a simple ‘like’ or at the most a short comment along the lines of: “well done” or “I like xx about your photography”.

One Image; Two Reflections is an opportunity to take this same idea and apply it to a single photo. By volunteering one of my own photos for this process I’m hoping to learn how to judge my own photos, as well as to show you the thought process behind a photo. I will pick a photo and write about what I like (and don’t) like about the image. I will try to put into words why I think a particular photograph is successful. Kristina will also look at the photo and write about what she sees in the image, similar to what she does on the podcast. 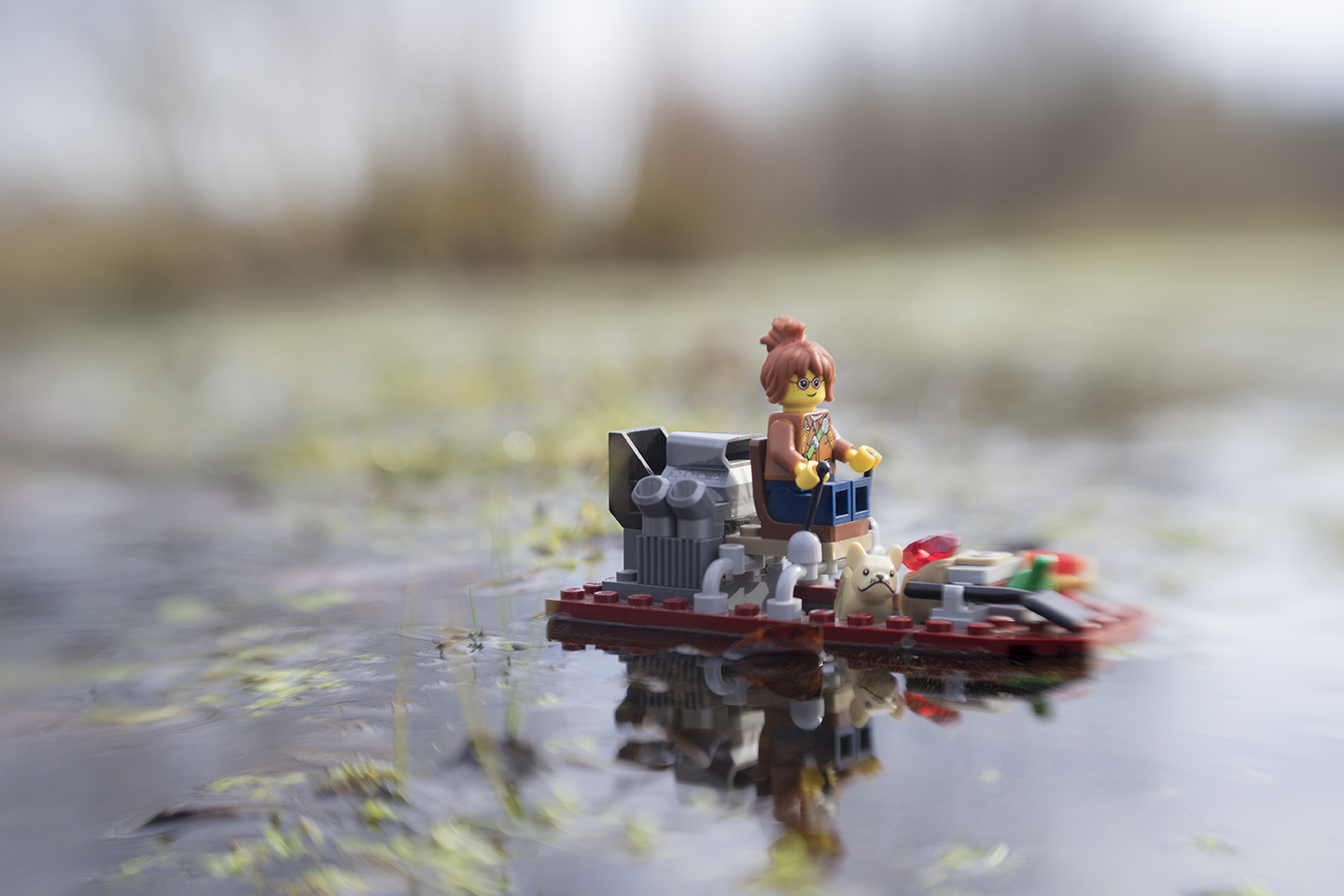 “Above all, be the heroine of your life, not the victim.” ― Nora Ephron

All my images end and begin with a quote. The quote is both the final step in creating an image as well as the door to my understanding of the image. For this image I chose a quote that would reflect the image of a female explorer on a presumable successful quest. We know the trip has been successful, up to this point, because of the smile on her face and the jewels in the front of her boat. The boat is crossing the frame, soon to exit which leads to more question. Is she on her way to another adventure? Or is she returning home with her treasure? I wanted to create an open ended story so the viewer could create a connection with the image by creating their own ending.

The hero of the story has a dog as a companion because all adventures are better shared with friends! Our hero may be alone, but she is not lonely. You may have noticed the frog adorning the front of the boat. This is my nod to the princess aesthetic. We will never know if our hero is a princess, but if she is, she doesn’t need a prince to save her.

While this photo was taken earlier this year in my favorite puddle; I’ve been sitting on it because I was not sure how I felt about it.  I’ve found with experience that images I’m often immediately drawn too, don’t hold up over time. Conversely, images that are initially overlooked, later become my favorites. I’ve learned to sit with images, let them mellow and not make snap judgements.

Now that I’ve sat with this image for a few months I’ve decided that ‘yes’, it does qualify as a successful image for me. It’s a success because it tells the story that I set out to tell. It’s the story of a strong female protagonist on an unknown adventure. This image is part of a series I’ve been slowly compiling that retells the heroes journey through the adventures of female protagonists.

Earlier this year I created a mind map from the word seeker to help guide my photography. This image manages to capture quite a few of those ideas into one compact story. Besides the story being told the image captures a few of the ideas I set out for myself in the mind map. I wanted to create images with more symbolism ( dog = loyalty), explore color pallets (muted tones in the background) and aspects of light (flat). Even the choice of rubies in her satchel add another layer of meaning to this adventures story.

Its important to me to create images with strong female subjects. I want to create images that reflect who I am and who I want to be. Often these images will be take to the next level and turned into encaustic mixed media, 2d art works or greeting cards. In conjunction with two friends, Alice Finch and JacQueline Sanchez, we’ve launched the Women’s Brick Initiative.

When I look at an image to decide if it is any good, I have a lot of boxes that need to be checked. I think this image fits the bill nicely. I look forward to taking it the next step and creating a larger work of art, with this image as the starting point.

Now…lets see what Kristina sees when she looks at the same image. 🙂

Me (Kristina Alexanderson) and Shelly usually talks once a month about life in general and photography in particular. During this month chat, we talked about doing photography for yourself just because you are you. And that made me challenge Shelly to share an image that she loves <3. One that she has done just for herself. If she accepted my dare, I promised to share my perspective on the image…

What do I see

I see an image that Shelly loves.

The image is in color; taken outdoors; in a landscape orientation. In the center of the image I see a plastic toy boat in a lake, or maybe a big puddle. The perspective makes me see it as a lake. On the toy boat is a dog and a figure sitting a bit behind the dog and holding a stick. The figure behind the dog is smiling, seem to have glasses, long brown hair, all these details makes me read the figure as a female toy-figure. In the boat in front of the dog is what looks like a bag, something red and something green. It looks like stuff, but I can’t say what sort of stuff because all that is out of focus. Behind the figure that is holding the stick is something I think is the boats engine. It’s grey, and in focus.

The boat doesn’t seem to be moving. Maybe the boat just stoped or maybe it is going to start soon. Maybe that is why the female figure is holding the stick, to start/stop the boat. I don’t know which and the image  doesn’t give me any hints. The stuff that is out of focus in the front of the boat make me think that the figure and the dog are going on an adventure. The title of the image “adventure girl with bulldog” enforces that idea . The boat is in the center of the image but I also see that the toy-boat is in a lake or a small pond, because there is seaweed everywhere. In the background, behind the boat I see a forest or some straws.

The scene is calm, and I don’t feel any threat or tension. The figures seems happy and satisfied, like toys are, or like we are when we do “a face” for a the camera/photo-book/social media. We are aware of the camera and the viewer and want them to see how “happy” we are, how successful our vacation/adventure is. Maybe the figure is smiling because that is what is expected of her in this situation, or maybe she is just smiling because she is satisfied. I don’t know… The image gives me a feeling of peace, and the scene seems to be safe, and the toys in the image seems to be in control. They are truly happy and feeling good. Together.

I want to feel with them

This picture is for me pictorial of a sweet moment on the lake, of an adventure, a girl with a bulldog. If I could wish for something it would be that I would be invited by the image to take part more. Mostly because I love it when pictures gives me the opportunity to get involved. For me an image is always more interesting if I get curious and start to ask more questions around the scene and the figures in the image. I’d love to get more insights about the adventures that this girl will meet or has already met. I want to get to know her, feel with her and her dog, not just look at them. For me a good images makes me reflect upon myself, on larger existential questions or on my humanity.

To sum up. This is a lovely picture, that Shelly loves <3. An image she has chosen as one she has done for herself and I think I have some clues to why. There is a strong woman in the center of this story (that is something that Shelly often comes back to in her images). Shelly likes to portrays women that stand alone, are independent of the world. If you look through her images you will see that many of her models also are female figures on adventures in beautiful landscapes. They are often in the company of their cats or dogs or family. So the theme in this picture is something I recognize as one that Shelly comes back to, and loves to portray.

Thanks for sharing Shelly and for letting me be a part.

Next time I’ll talk about images will be on the podcast where I’m a regular co-host once a month. On our next episode we will be talking about images on the theme landscape.

I whisper – to end this

As a child I used played a game called “The whispering game”. We would be sitting in a ring and one started whisper a word that traveled around the ring of children all whispering what they heard. The last person in the ring said the word out loud, and the fun part was when the word became something totally different. What did we hear and how did we interpret that. In one of my Facebook-groups around photography, we play that game but with images, saying noting just looking and interpreting the image that we hear(see). So I took that game with me by looking at Shelly’s image and decided to whisper-this…  😉 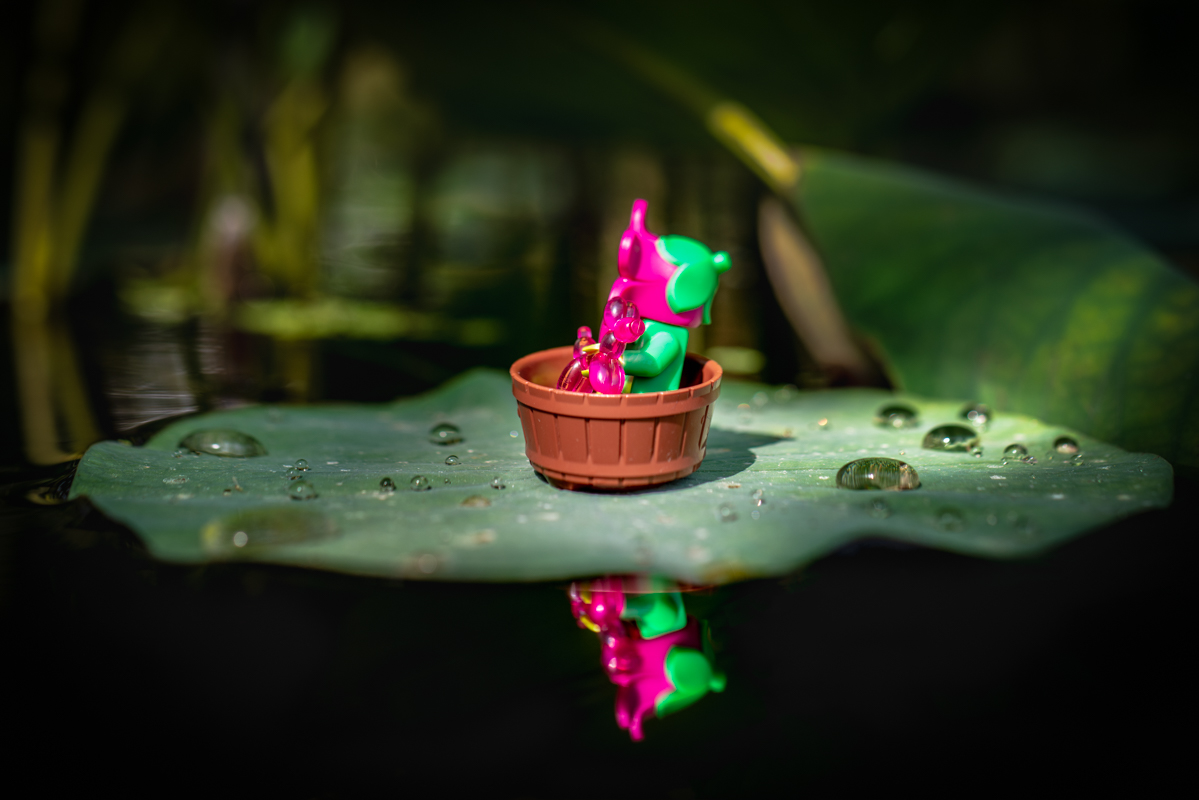 A whisper by Kristina Alexanderson

If you’re interested in more conversation about photography check out our weekly podcast or join our G+ Community. In the community you will meet like minded toy photographers who also enjoy exploring the technical merits and stories behind toy photographs.