We invited two Toy Photography community members to participate in this project, Sunny and Tom.

Tom was the first of the three of us to receive the set in the mail. And, without being asked, sent through some quick snaps from his phone as soon as the set was built. He also sent through a brief overview of the features of the set. Sam and Quorra have double sided head. The discs can fit onto each figures back. Sam comes with a helmet and hair… All this information was super helpful for Sunny and I as we waited for our sets to arrive. 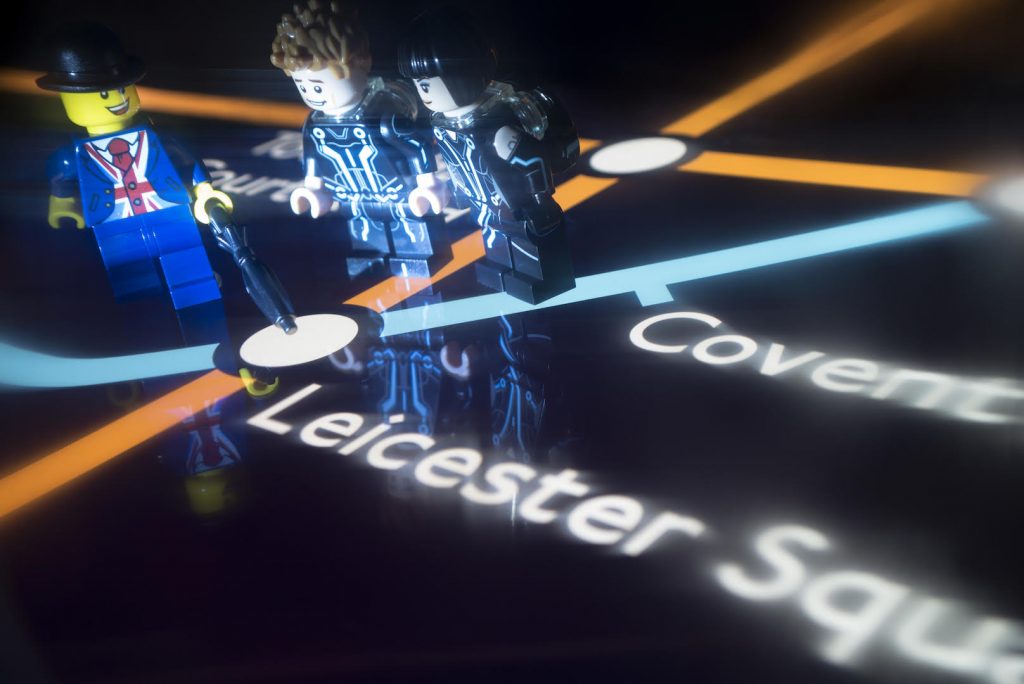 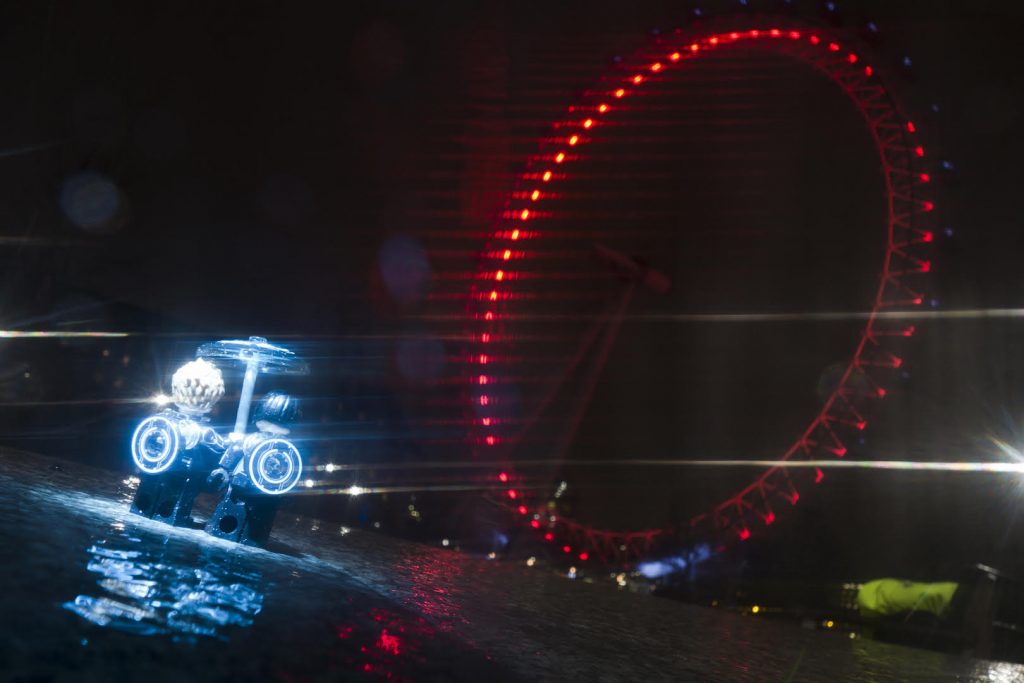 I had a wet and wild ride with this set. It was truly awesome to have the opportunity to do this and really exciting when it came in the post to think I was one of the very few who had a set. I’d recently made the conscious decision to keep Photoshop to a minimum within my photography and this set offered a great opportunity to keep pushing the practical effects I’ve been utilising recently. So I stocked up on LEDs, laser pointers and filters and with the addition of vaseline (being my biggest discovery on this project) the results are that all the lighting effects, lens flares and glows I captured in camera with as little RAW correction as possible in post.

Starting out I had loads of ideas floating around in my head and was preparing for the usual “in studio” efforts I create, when Lego asked if I could go to London and take some sightseeing shots for them. Unfortunately the weather in the UK has been a touch temperamental over the past month and the day I went to London was a total washout. Out of my comfort zone and struggling to stay dry (myself and the camera) whilst keeping a secret product hidden in the busiest tourist spots in London and trying to get such small and large things in focus at the same time meant it was not the most enjoyable days and I came home rather dejected. As a result I am truly amazed I was able to create a collection of outdoor images for Lego as they requested following all of that. And in the end I’ve probably ended up with two selections of photos, a one for me, one for you type of thing.

But when working for a client the whole project becomes a give and take sort of affair, you have to make compromises you’re not used to as an independent artist. In this case taking full frame shots rather than cropping to my usual cinematic ratio, or taking wider angle images to include the whole set rather than focusing in on details like I usually would like to do. I suppose all these hurdles are what make the creative experience worth while and it has been a great experience looking back. But it is quite funny that now the set is in the world and everyone else is super excited I’m feeling a little burned out, and am looking for anything other than Tron to photograph.

Oh well, I can still say I’ve worked for Lego, and that is definitely a tick off the bucket list.
Tom (@tomtommilton) 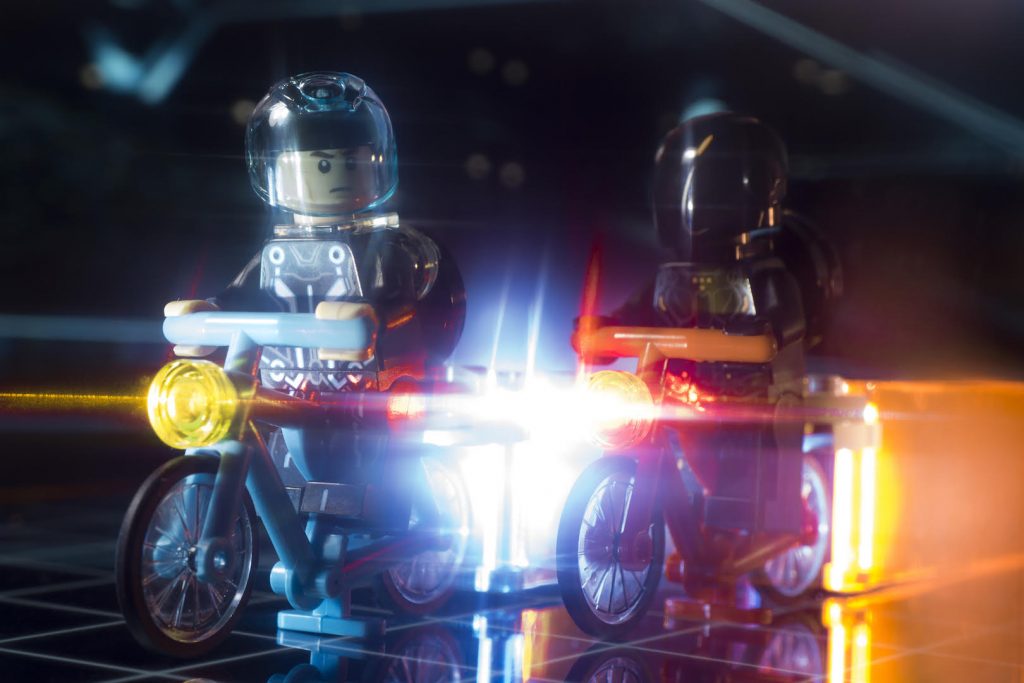 Sunny’s set arrived next. He was the one to point out that the Light Cycles were fingerprint magnets! “Gotta remember to clean it up a bit before shooting!” Another great tip shared between the three of us. 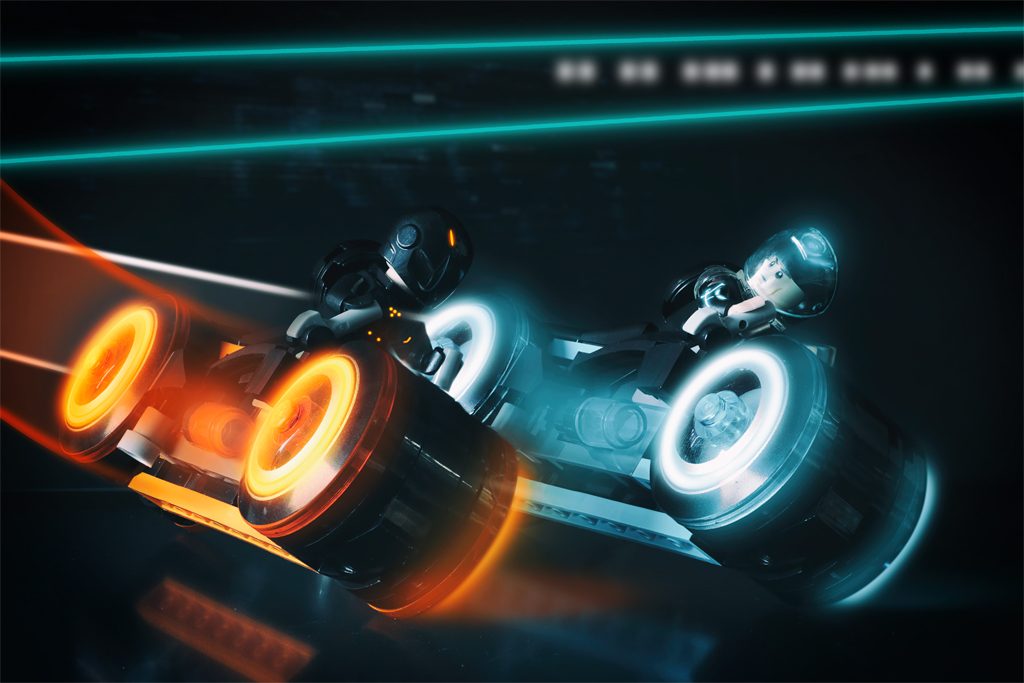 I was excited and honoured to be selected to shoot this set. Prior to receiving the set, I had a bunch of ideas all sketched out. Then I was told I was not allowed to mix properties , so I had to throw out half the ideas! That left me with doing racing shots of the light cycles. Had to think real hard to not do any racing shots. I managed to squeeze out two photos that’s filled with some humour. Excitement turned to panic when I saw what Tom and Brett had submitted. With 24 hours left to the deadline, I rushed out for my first outdoor night shoot, not really knowing what to expect. I wanted to shoot some iconic building from Singapore as the backdrop and ended up in the business district. Saw a curved railing that fit nicely as a race track. Was pretty happy with the end result of the night shoot.
– Sunny (@zekezachzoom) 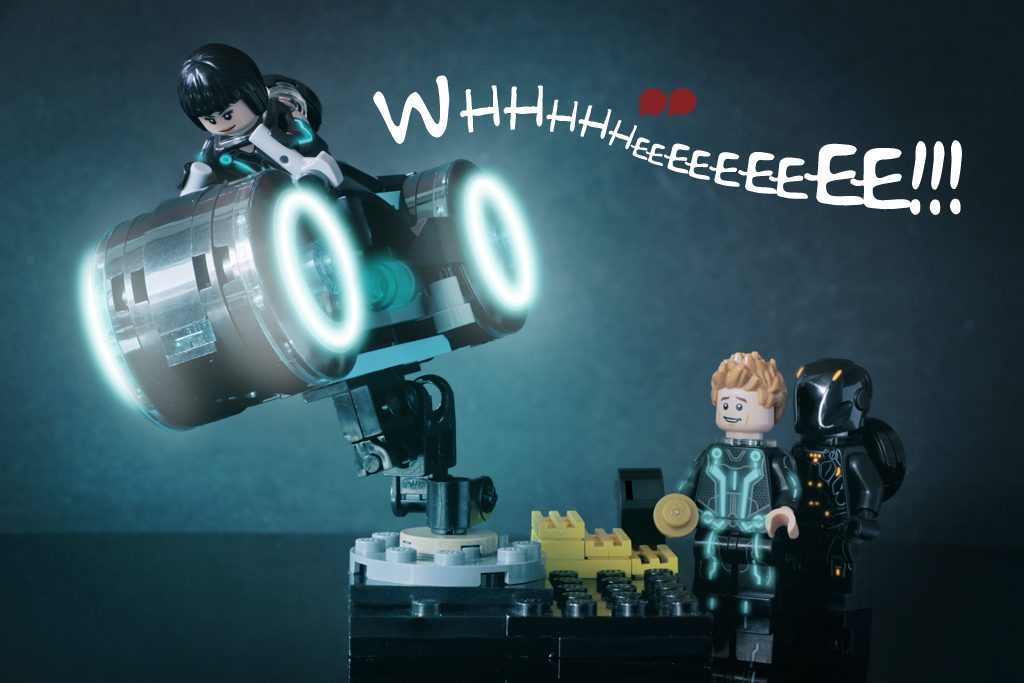 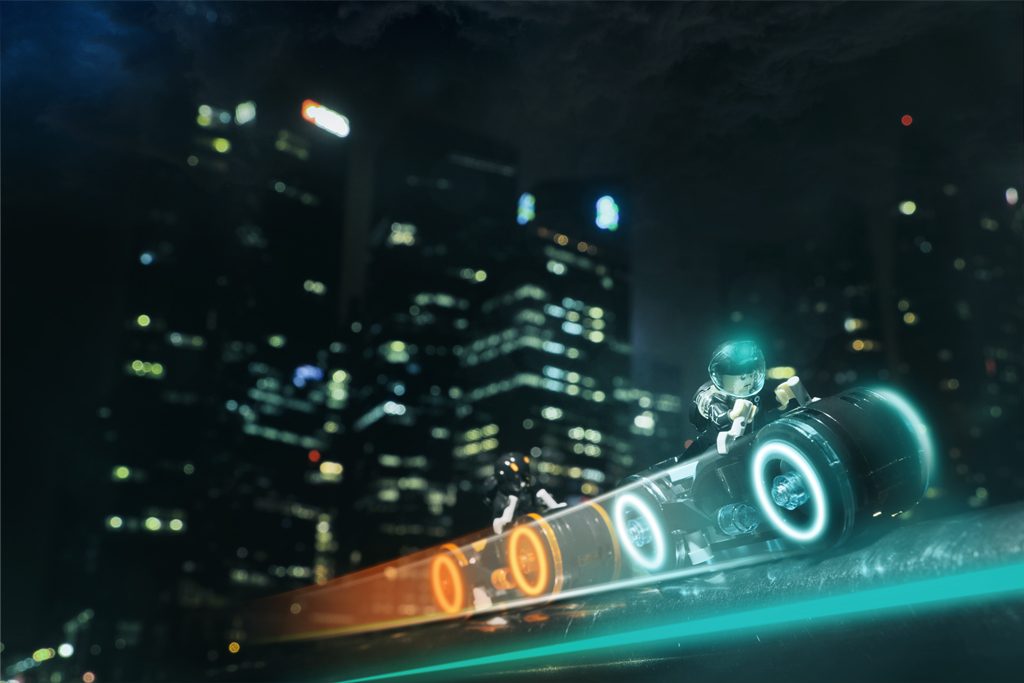 As I live the furthest from the Tron Legacy sets’ departure point, I was last to receive the set. But armed with the preview shots, descriptions and tips that Tom and Sunny had sent through, I was ready to shoot!

I enjoyed the build, but as deadlines were looming, I didn’t really have time to savour the build process. I did enjoy building first Light Cycle, but the second was built without the use of  instructions as it was the exact same build as the first. 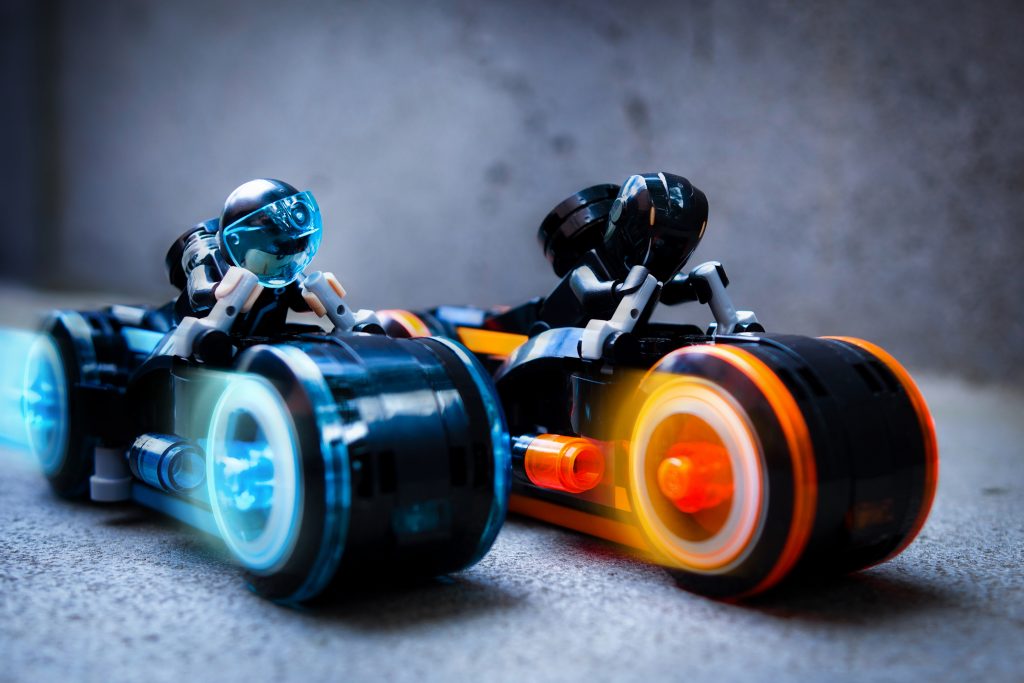 However, as the completed build sat before me, its photographic potential was apparent. The Tron Legacy set really does lend itself to being in front of the camera. Perhaps that comes from the play-ability of the set? I can’t wait to mashup the Light Cycles with other LEGO series. Scout Troopers riding them though the Endor forest. Harry Potter chasing the Golden Snitch on a Light Cycle. These Light Cycles have so much toy photography potential! 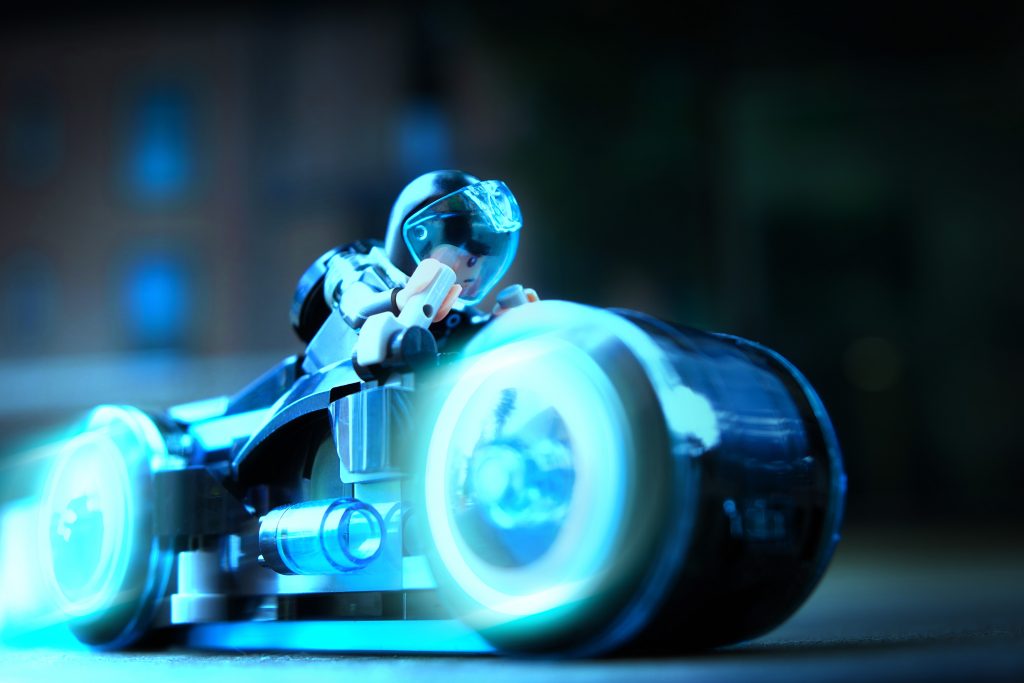 As much as I enjoyed shooting this set for LEGO Ideas, I think I enjoyed sharing the experience with Tom and Sunny more! Sharing thoughts, difficulties, challenges and successes was a such a experience. Without words, the project organically took on a collaborative nature. A triple force striving for a common goal; to deliver.

Thanks to Darryl and the LEGO Ideas team for inviting us to be a part of this exciting Tron Legacy launch project. Despite the tight deadlines, we all had a blast shooting this wonderfully photogenic set. Thank you Tom and Sunny for making this a fun project to work on. You guys not only knocked it out of the park with your photos, but made the process an enjoyable one!

Have you got your LEGO Ideas Tron Legacy set yet?