Lego All Around Us

My desire to photograph LEGO goes all the way back to my childhood, to my earliest days as a creator.

I was a kid in the early 90’s, and my favorite pastime was building in my room, making new models and creating characters with elaborate stories to tell. The only photos I saw of LEGO that were not straight from the packaging came from LEGO Magazine, where other children submitted pictures of their own MOCs, a term I’m not sure existed at the time. The pictures were often poor quality, taken with a parent’s flash camera, often in the den or the child’s bedroom. All the same, I thought it was just about the coolest thing ever that you could get a picture of your model featured by LEGO in their very own magazine! Over the years, I sent in several photos, and never had one published. I moved on, but the desire to photograph my LEGO and make it look the way I saw it in my mind remained. 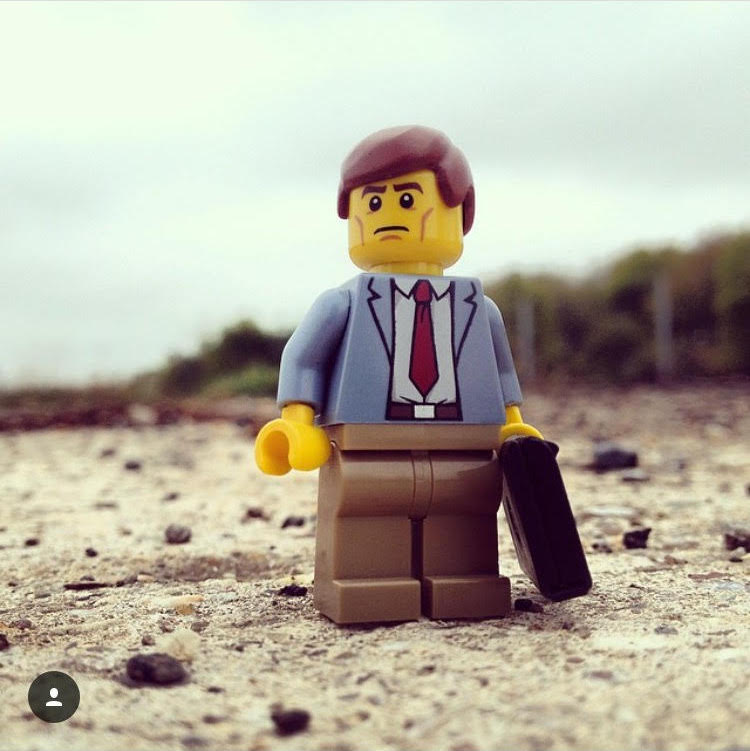 This was how I always imagined my Lego minifigures as a kid, like they could walk straight out of the television.

As I grew older, LEGO fell by the wayside, and it wasn’t until I began pursuing teaching that LEGO re-entered my life. I had enrolled in graduate school to become an elementary school teacher, and at the time I was working in an after-school program. By this time I had my first smartphone, which meant I had my first true digital camera. Naturally, this changed everything. I would create elaborate MOCs with my students, and take pictures of them to commemorate the build before it was dismantled. I also began shooting pictures of other tiny toys, and really enjoyed playing with small scale. Before digital cameras I could never shoot LEGO up close, or to have the chance to keep everything well lit and in focus. I was actually shocked at my own enthusiasm when it came to creating builds and shooting toys! It was then I made the fateful call home to my family: I’m coming home for my old LEGO.

Once I began shooting my own MOCs, I discovered that there was a wide community of photographers and builders who were showing off some really incredible work. At the same time, I was discovering how to shoot my builds against a backdrop, and increase the quality of my presentation. The big revelation came for me when I began to think about something that I had considered ever since I was a child: what if LEGO people lived in our world, and were all around us, but they were generally unnoticed? This line of thinking changed everything for me. 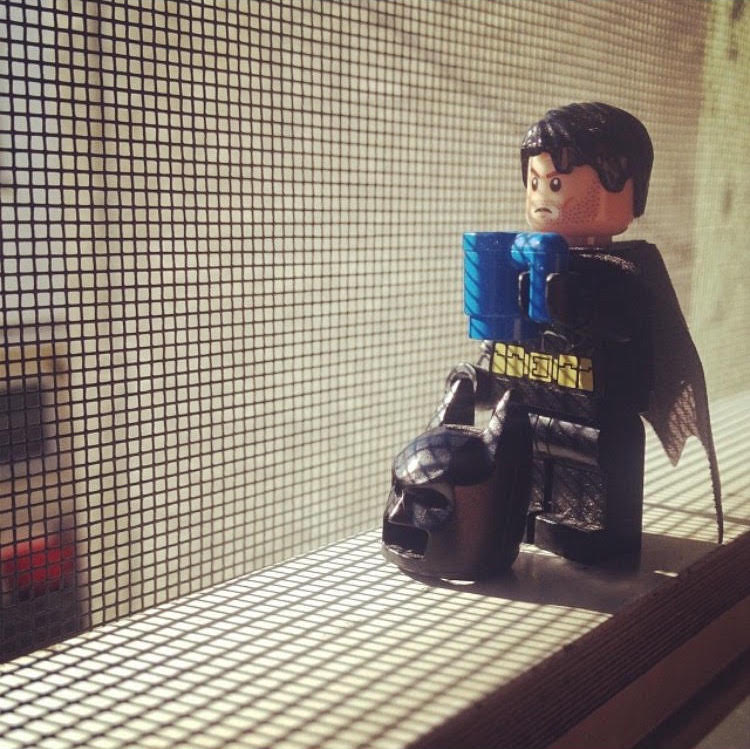 This grumpy dark knight was one of my first, and still one of my favorites.

The first truly successful photo of a minifigure is still my Instagram profile picture. It’s a shot of a grumpy, unshaven Batman drinking coffee while looking out through a window screen. There was something about that picture that made it all come together for me. I saw that I could get the figure neatly in focus using just my phone, and that I was beginning to really understand how natural lighting worked. It was clear that when the figure was the focus of the picture, little details speak volumes about what you’re trying to capture. Just having Batman appear grumpy, using a head with stubble pattern, and having him look outward into the horizon, gave the image this palpable emotional quality. I kept making MOCS, microscale cities and vehicles, but I still wanted to play with LEGO minifigures outside. In June of 2014, on the heels of the LEGO movie, I took my little Lego Emmet outside to my garden to shoot him. 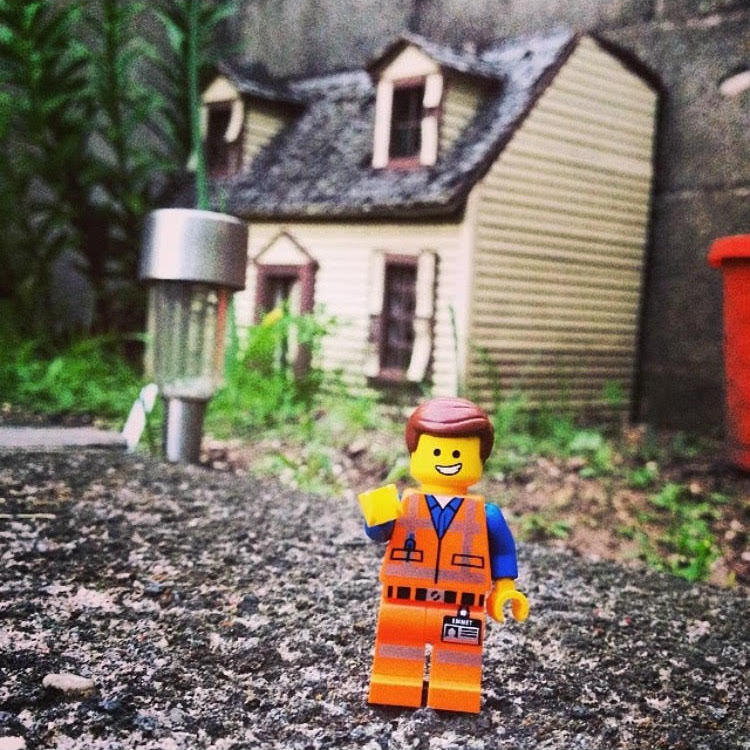 The result was not the most interesting photo in the world, but I knew I was onto something. By the end of that month I was taking my LEGO movie minifigures out to shoot. This was around the Benjamin Franklin Parkway in Philadelphia, best known to outsiders as the large roadway that extends from the Philadelphia Art Museum (Rocky’s famous steps)  back to City Hall. I was working in the area and found myself taking photos on my lunch break. From these photos, the hashtag #legophilly was born. After that, I was obsessed with perfecting my photography and presenting builds that I had been working on for some time. To look back at my Instagram posts, it was around this time that my personal account turned into a LEGO photography account. With a few exceptions, I had gone full LEGO by August of 2014! 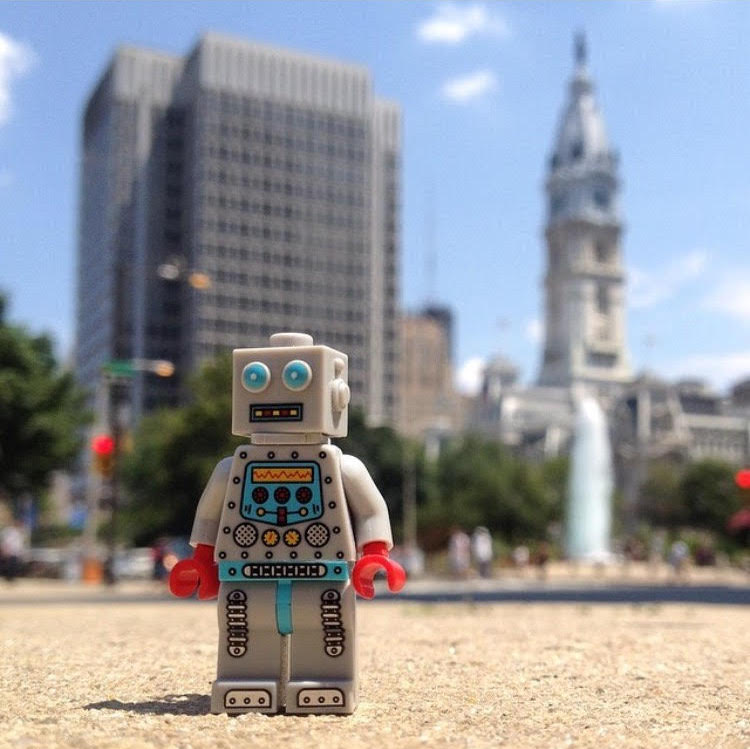 A Robot going to work in Center City Philadelphia, with City Hall in the background.

My favorite thing to do then, and still to this day, is to take my minifigures and MOCs out onto the street or into the natural world. There is something about seeing them out in city or in nature that is endlessly entertaining to me. With the focus on these tiny figures, the rest of the world becomes a fuzzy suggestion, a kaleidoscope of color and the vaguest sense of what you are really looking at. For me, the fun came from making LEGO figures that had a reason to be in the locations where I brought them. This led me to creating my own characters, which I was not seeing a lot of at that time. Each of my LEGO Philadelphians existed in the same world, the shared geography of the actual city. I shot them at tourist landmarks, hidden gems, and just on the street in my neighborhood. I would also write a little interview with them, to inform their character and give some context to the photo.

Finally in September of 2014, a seminal event occured. LEGO discovered my account, liked one of my photos, and then began following me. The photo that got me followed by Lego! This picture changed everything.

I was floored, shocked, elated! LEGO, a company that had shaped so much of my childhood, was acknowledging my work! What’s more, they had picked a photo where I really felt I had begun to come into my own. Since that time, my approach to taking photos has evolved significantly. I went on to make dozens of #legophilly posts, to the point where my work got me a job teaching with LEGO. Not long after, I began to use what I had learned to teach young students how to photograph small toys as well. I have even had the privilege to be an administrator for @brickcentral, and more opportunities seem to arrive over time. What started out as me rediscovering an aspect of my childhood turned into a passion project that has continued to inspire me for years. The community of photographers I have gotten to know through Instagram has been a huge positive for me, and I am always grateful for their compliments and input. 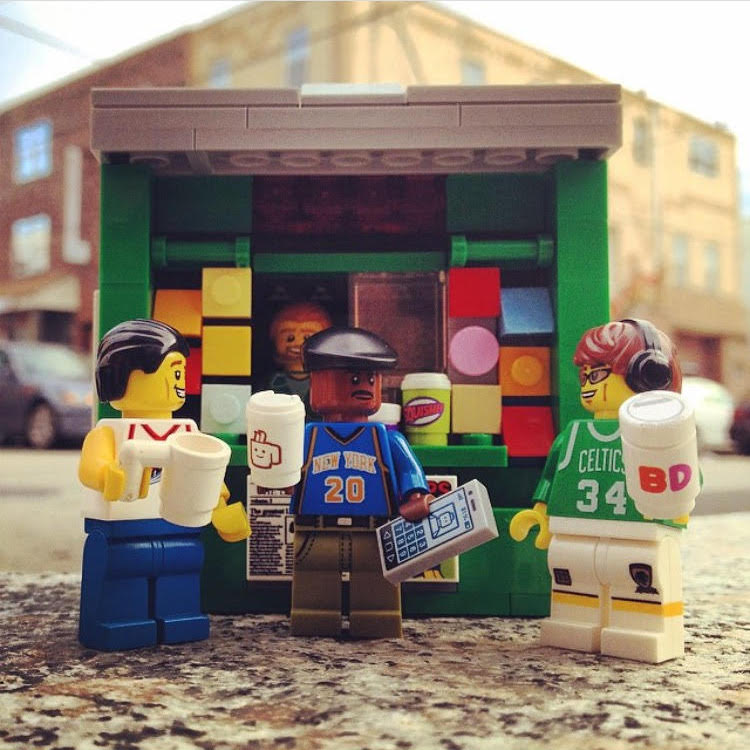 Just a bunch of Lego Philadelphians hanging out at the corner newsstand.

To any of you who are just starting out, keep going even if there doesn’t seem to be a direction at first. Like any worthwhile creative endeavor, it has to come from a place of personal desire and motivation. Challenge yourself to get the photo you want, and take the time to figure out what works and what doesn’t. There is endless creativity in these simple bricks, and I have found a wonderful outlet that I am still grateful to be involved with. If all else fails, if your creative engine isn’t running, simply ask yourself, “What if LEGO was all around us?”

If you would like to see more great photos like Corey’s check out Life of Toy Photographers 2017.  Buy a copy and support the blog!

About the Author: Corey Cohen