One motive three photographers – the unicorn

What happens when three photographers make pictures with the same motive -a unicorn?

Last Saturday, me, Shelly and Christoffer had a photo-meet-up in Stockholm. It ended with us challenging ourself. We all took an invidual image of the same motive. The Unicorn. The question we asked ourself was: if you will be able to see the photographer behind the camera? Or if you will see the same picture? We worked in the same spot, with the same light and with the same motive… We challenged ourselves. 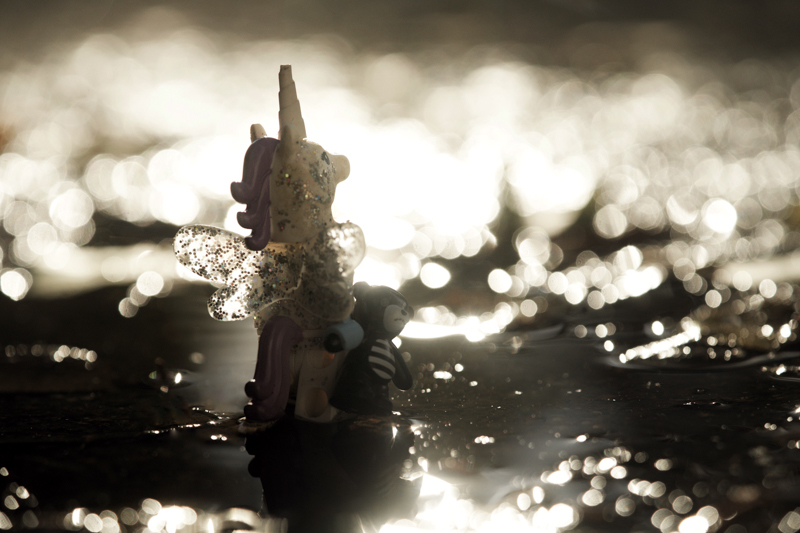 The motive is one of Shelly’s unicorn. This one is beautify painted in glitter and with wings. The challenge accually started when Shelly put a teddybear in the hand of the unicorn and smiled. Then she said to me: “The unicorn needs the teddy bear to make the image more into a ”kristina-image”.”

I smiled back, and stood behind her. As I looked at the scenery.  I thought of what would I do with that motive. What would I do in that light?

Shellys image, that I didn’t see at the time is above. It is a lovely image. Almost black and white, but very glittery. The puddle almost look like it’s ice. I like the fact that the surrounding’s are almost non existing and I can’t see the messy puddle. I also like the fact that I can see the eye of the unicorn. That is one detail that is missing in my image (below). Shelly has also put the motive in the left corner of the frame. It’s looking into the empty space in the images, that composition makes the image more harmonic for the viewer. I like that. 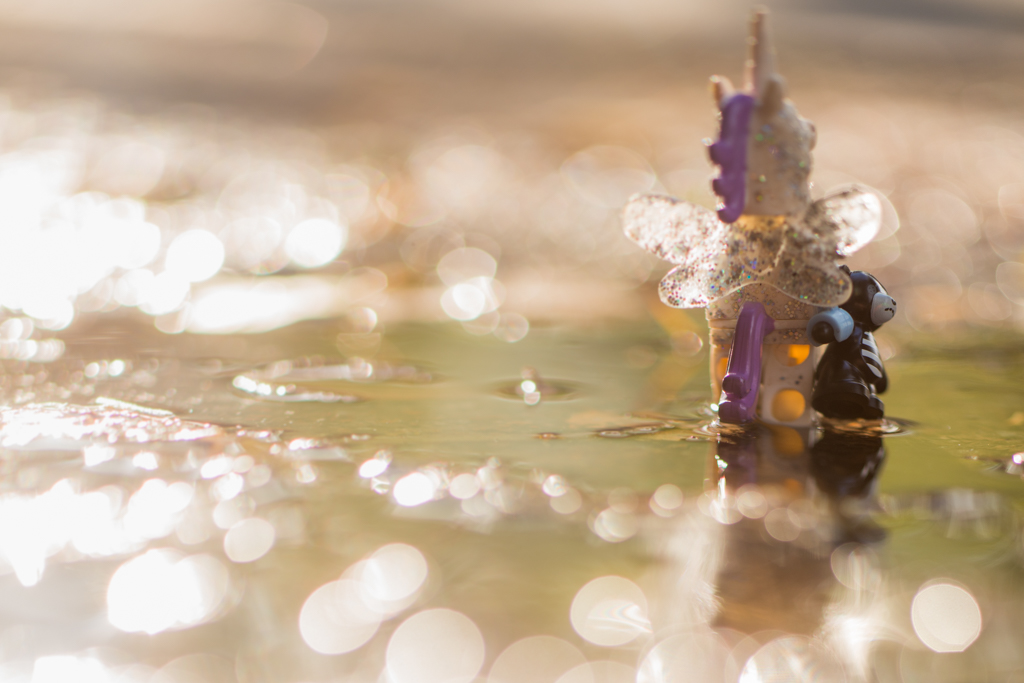 After Shelly were done with her work. I gently asked if I could give it a try. The puddle that I had picked for another idea was filled with leaves and all muddy. Just perfect in my mind because of all that and the fact that there where a tree on the otherside of the road, that gave the reflections a gentle green color.

When I started I had some problems with the highlight’s. My ISO were to high and that made the bight areas in the image to burned out. After adjusting that. I decide to work the scenery by putting the figure on right side moving toward or slightly facing what ever happens outside the frame. The image is simple, and the only thing that maybe awakes the viewers is the fact that there seem to happen something outside of the frame. Otherwise it’s just an image of an lego unicorn in a puddle.

I choose to put the focus on the teddy. Not the unicorn, maybe you could say that I decide to display Teddy and not the unicorn. I prefer to work with elements that I know of and have a tight connection to. 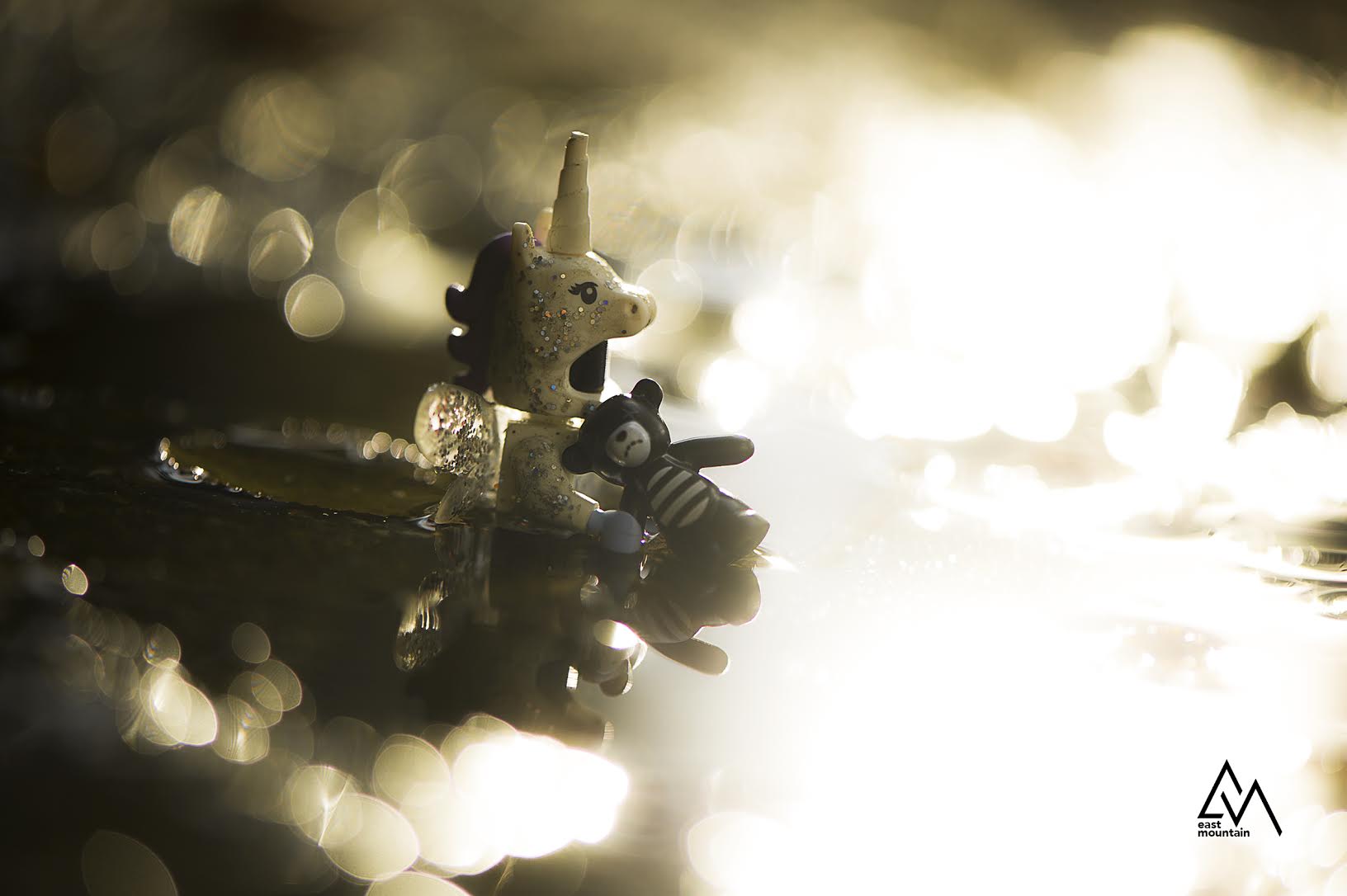 When I was finish, Christoffer started. He went for a radical decision to change the face on the unicorn to a black one. And that makes all the difference at least for me, the black face is something that makes me look at the image twice. There is something about the unicorn that I don’t really get util I realized it was the black face – because that looks like a huge mouth.

I’m not sure, but the hard contrast between the unicorn uniform and the lack of a face make the motive even more darker. And Christoffer is amplified by the dark parts in the image. The images is devided in two parts, a bright one and a dark one where the unicorn is. When I compare Christoffer’s image with mine I see that he works with darker and more contrast, more like Shelly’s, but still not the same…

So looking at the three images I can only say that one motive and three photographer will not end up with the same unicorn-images- but three different ones because we are all different. And we make different decisions.