Why? by Inner Brick 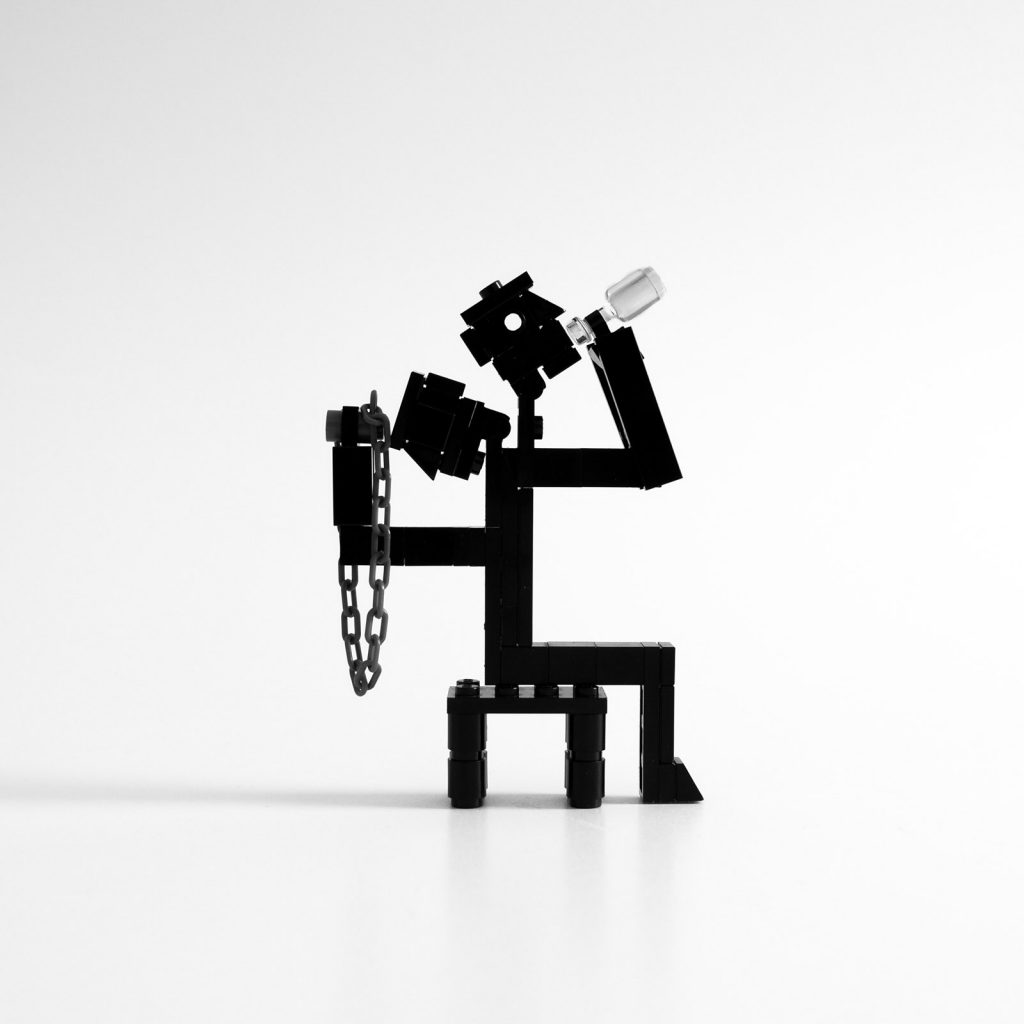 I was asked to write a post about how I use Lego. I looked through my Instagram account (Psychology in Pictures) and realized that its like a mirror to me. My models, my photos show my struggle in life. They’re reflections of my dark side. Their dark because I turned off the light. They’re in the dark because I put them into the cellar. Either way, they exist regardless whether I can see them or not.

But let me start at the beginning.

I am a psychologist and work as a therapist. I’ve participated in many self-awareness training group sessions, I’ve engaged in one to one therapies for myself and I almost have a PhD degree, almost… I’ve written many articles about the benefits of construction toys in psychology practice. I even designed a four year research plan outlining how to standardise a psycho-diagnostic tool and method based on building blocks.

How Lego came to my mind? I love my profession i.e., helping people. I wanted such a method that could make the therapeutic work more efficient and in the same time more ‘fun’. I dreamt about a tool that is neither scary nor boring but friendly and colorful. One day, it came to my mind: what if I combined my hobby, playing with colourful plastic bricks, with my profession? Long story short, I did some research and here I am. I’ve designed lots of playful tasks based on psychological concepts and diagnostic categories. These enable me to use any construction toy in therapies and gain informations about my client’s psyche. 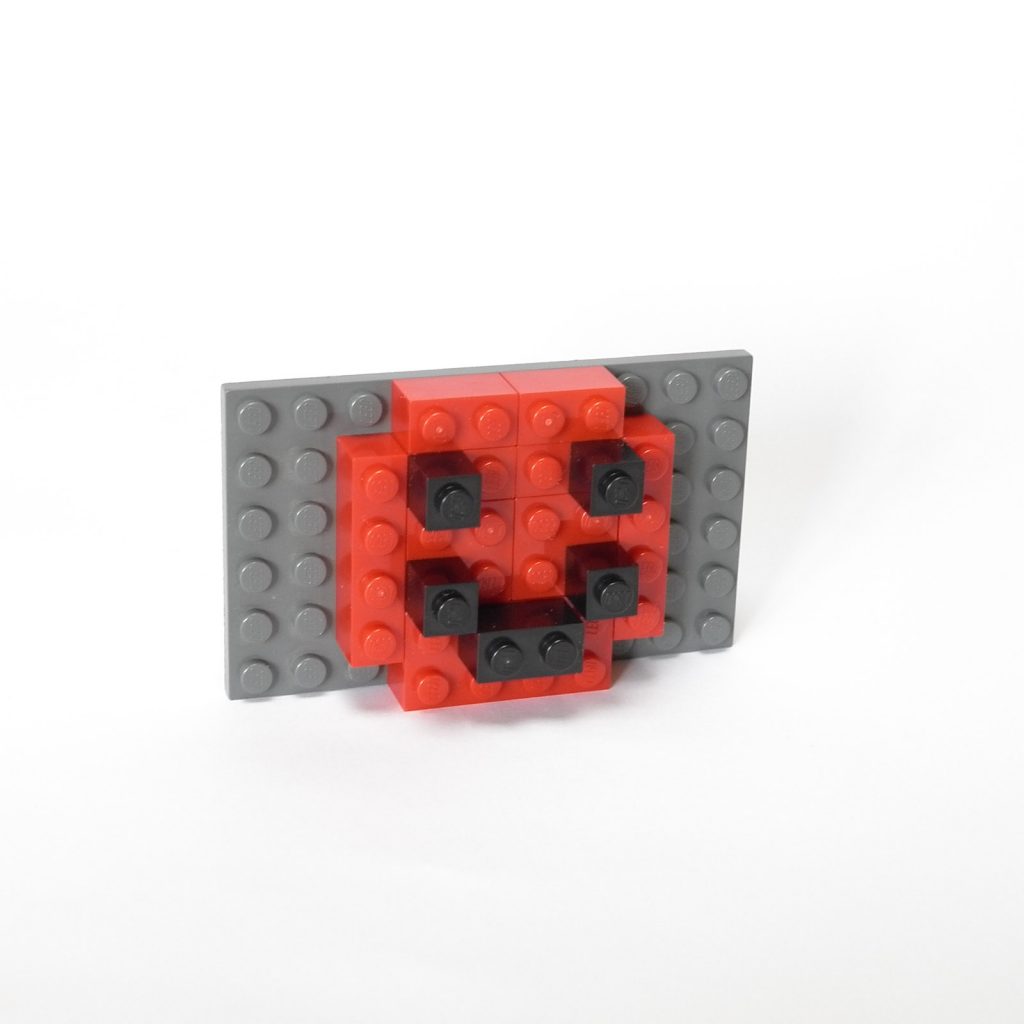 Here is a good example of how it works. This smiling face was built by a client during a therapy session when we were working on Emotions. I asked him to create something relating to fear. When he had finished his work, he showed me the model and said this was it. I asked him how come it was smiling then? He did not know the answer. It turned out he difficulties recognizing and expressing certain feelings.

My games can be used for both gaining subconscious informations and setting up a treatment. The most interesting part of these activities is that they not only give ‘hidden’ information, but also makes them visible, even touchable!

It wasn’t long before I realized I can also use Lego for illustration purposes. So I started to create my own interpretations about psychological concepts. Here is one of my favorites: 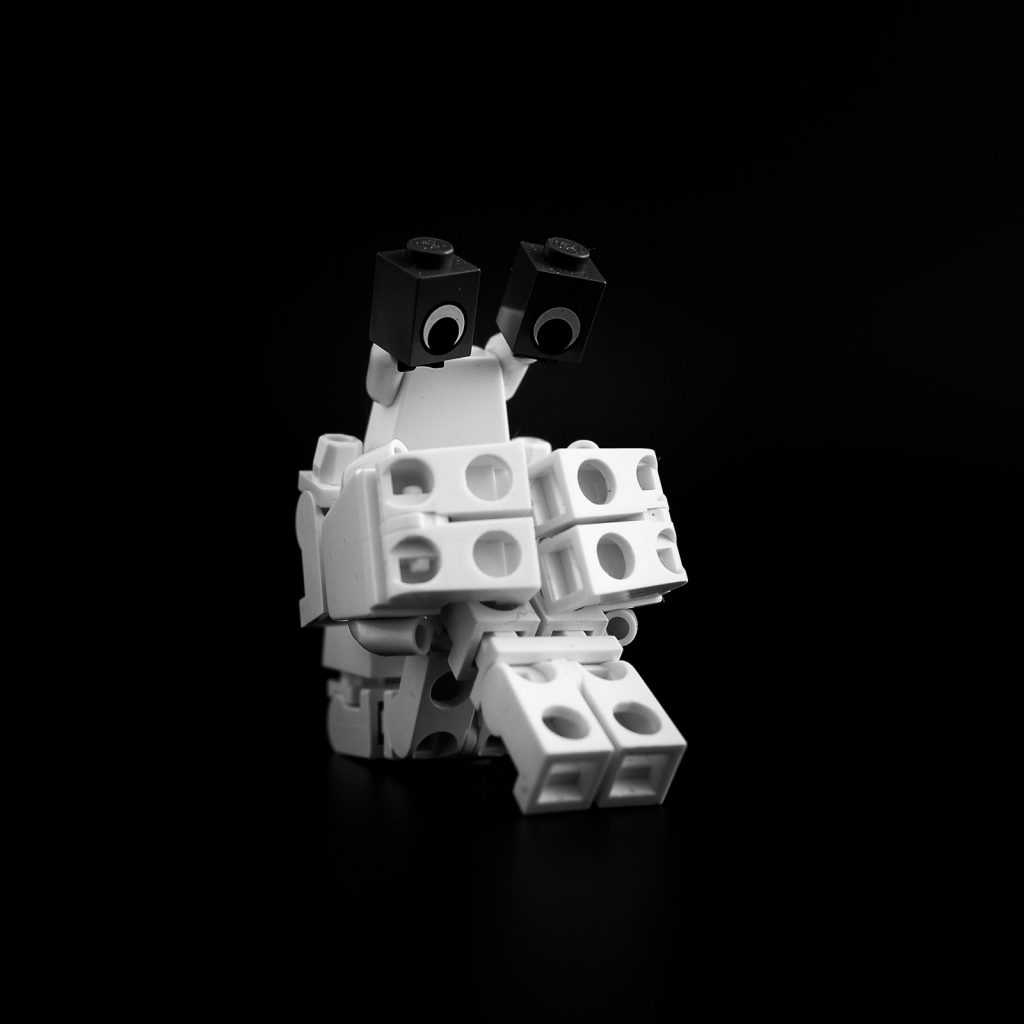 It is the sadness. It is made of Mini-figures. For me it represents how detailed and complex a feeling can be. All the experiences that make us sad take shape in a way that is typical of that specific emotion. As though they would make a gesture. At least this is the way I see it, this is how I imagine it. I hope it makes sense.

After a while I started using my toys in a different way. I tried to express myself through building. Using my experiences and emotions to create something is one thing, but to interpret them, give them names and meanings, connect them to my deepest feelings; this is where the psychological work begins. Generally it’s a two step process: first I build something, then I reflect on it, abandon myself to it. This additional step is what makes it more than a simple building exercise, more than just playing with toys. 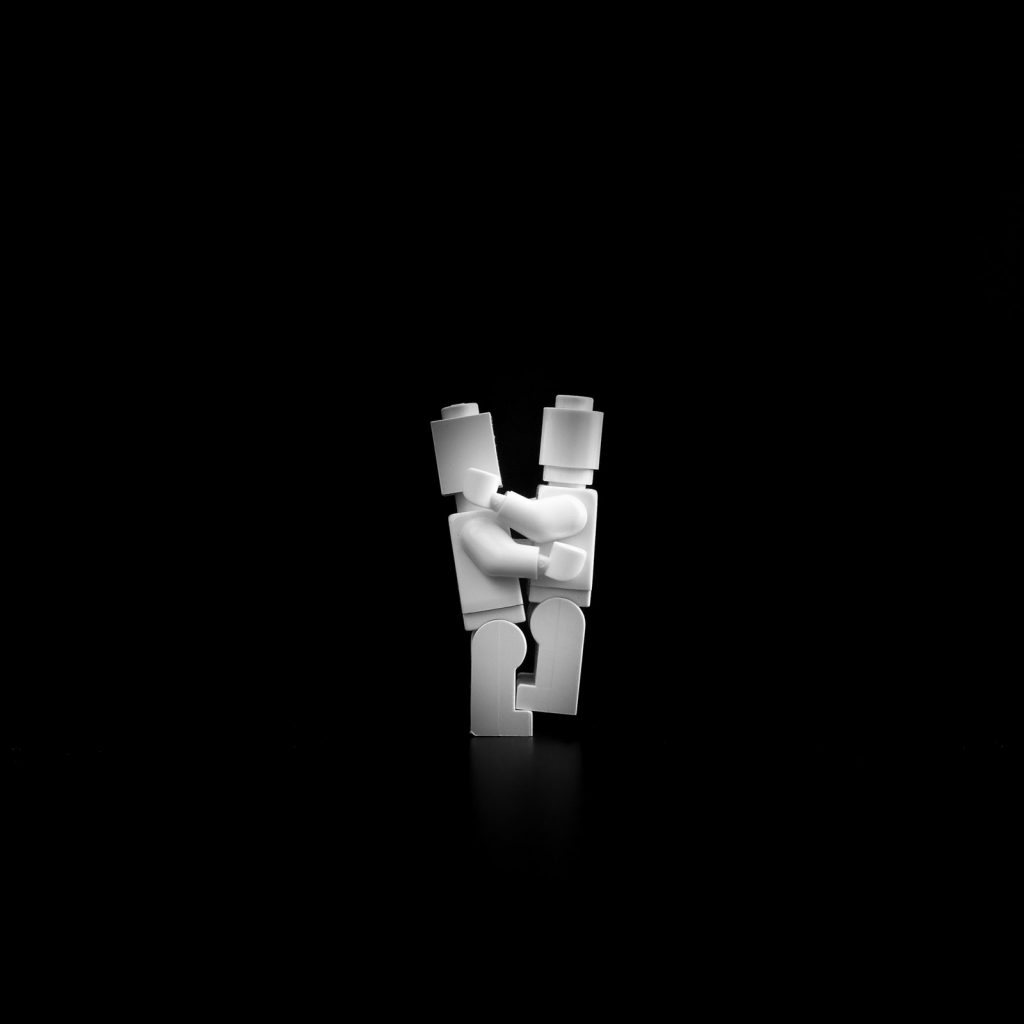 This embracing couple was my first real black and white model. In my native language there are two words for love. One is the ‘love’ and the other is (and now I’m doing my best to translate it) the ‘loving’. A therapist told me once that there is a huge difference between the two. Although it’s quite obvious nobody seems to use them right or care about it. The word ‘loving’ implies activity which makes sense since it’s from a verb. And because of the added ‘-ing’ it makes us sense (on a subconscious level) there is more to this word than meets the eye.

Why is it so important to me? ‘Love’ implies saying whereas ‘loving’ implies acting. This couple is not saying anything rather doing something. They’re holding each other. Both of them are active, both of them are sincere.

It’s somehow black and white, it’s true or false. People shouldn’t say things if they don’t mean them. Let me show you another example. 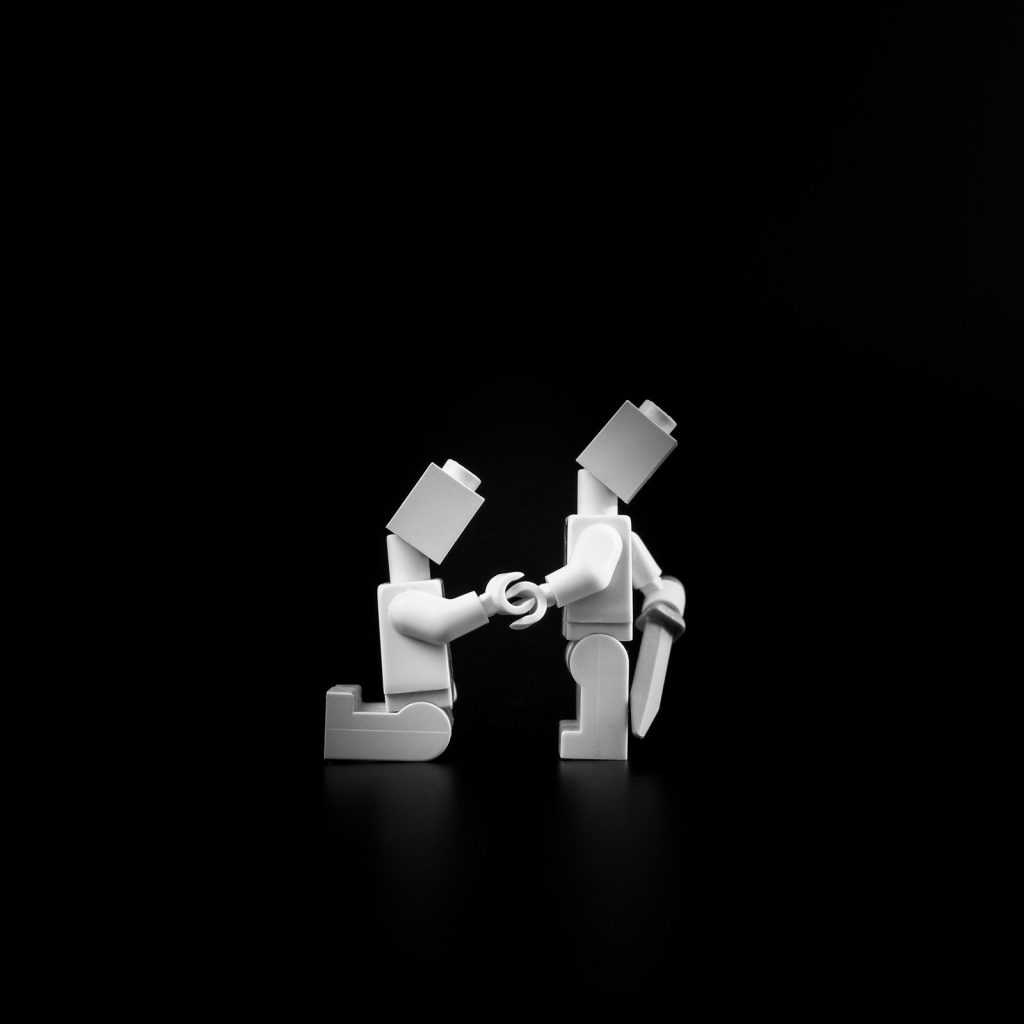 This photo represents how people usually behave in my country, how they treat one another. The problem is not that they are not trustworthy but they are mean. They mislead one another! The one figure gives a hand to the fallen one. It’s a gentle gesture. However he also hides a sword in his other hand. It foreshadows something inappropriate, something bad. Because of the antagonistic gestures this photograph is a good example of being mean.

A friend of mine, who came to my country from abroad, told me once that his very first experience here was that he had been fooled. The strangest part of it is that it’s always the same. No matter who you’re talking to, no matter what you do. 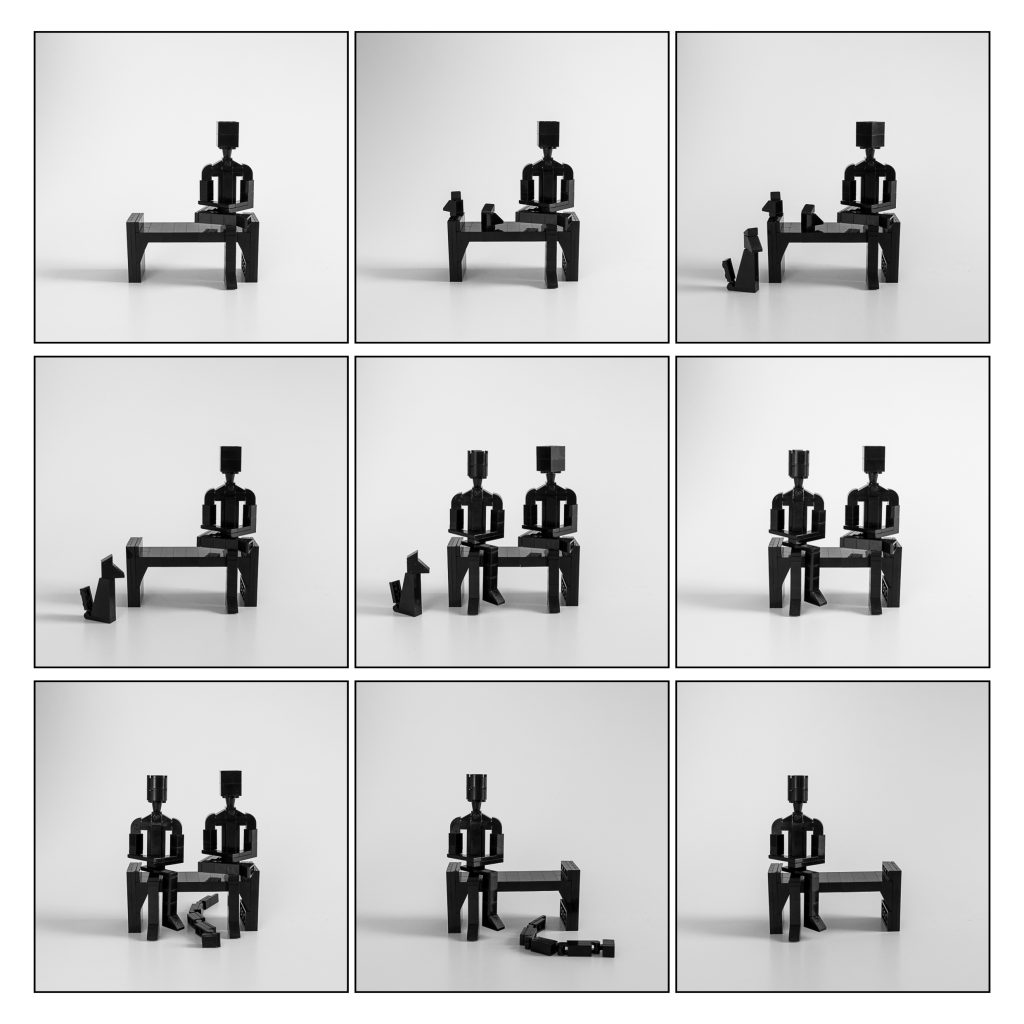 This photo series was built for expressing this experience of mine. You’re alone and lonely. Then you have company, different kinds. However, at the very moment you start to hope or believe, something always happens which ruins everything. The cycle repeats.

That snake represents my culture, the attitude of the people, how intrusive they are… and I don’t like it.

It makes me feel… I don’t know. 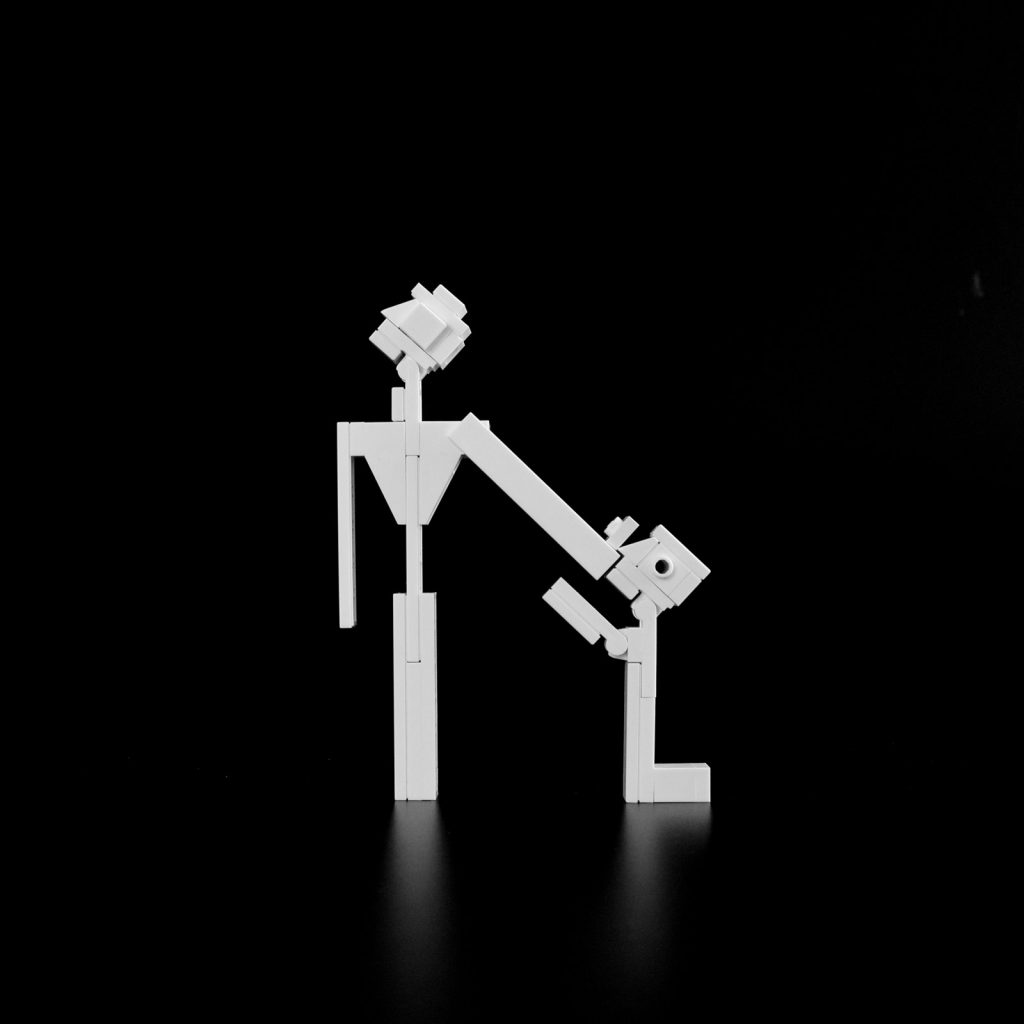 As though they don’t accept who I am. In this picture a man stops a kid. He says that he never loved him. He doesn’t hate the kid for what he did, he hates him for who he is. The whole existence of the kid is neglected. 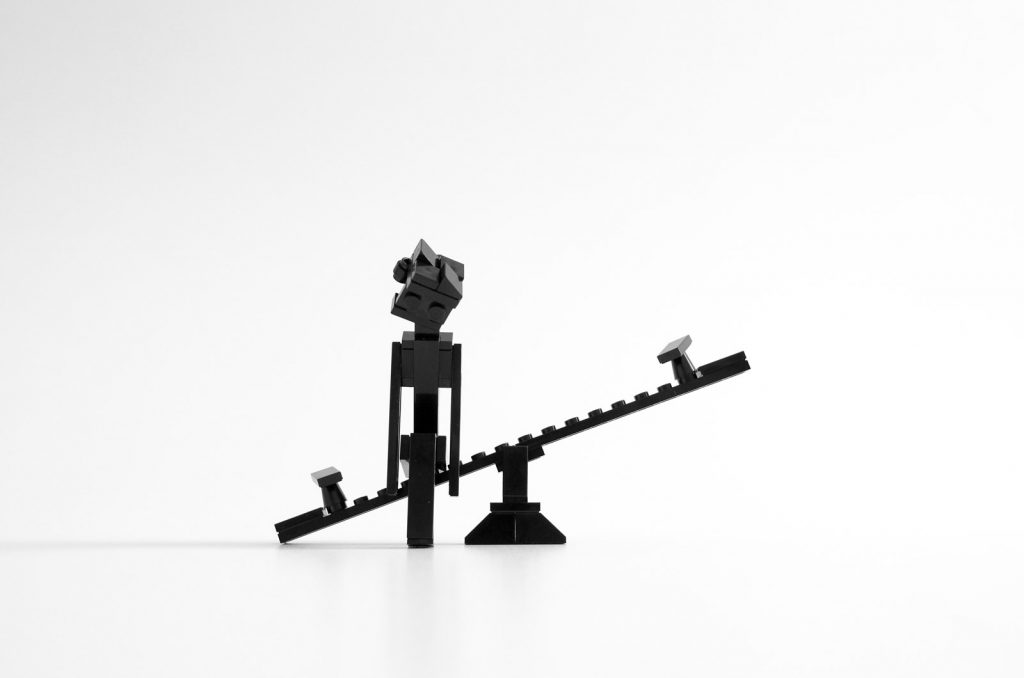 Being refused on such level makes me feel sad. And lonely. As if I was sitting alone on a see-saw and trying to play. How could one have fun on his own with a see-saw?!

So I had to choose and make a decision. Not only for myself, my own wellbeing but also for my family, my kid.

I’m well aware what I have to do. It seems that the one and only solution is running away. 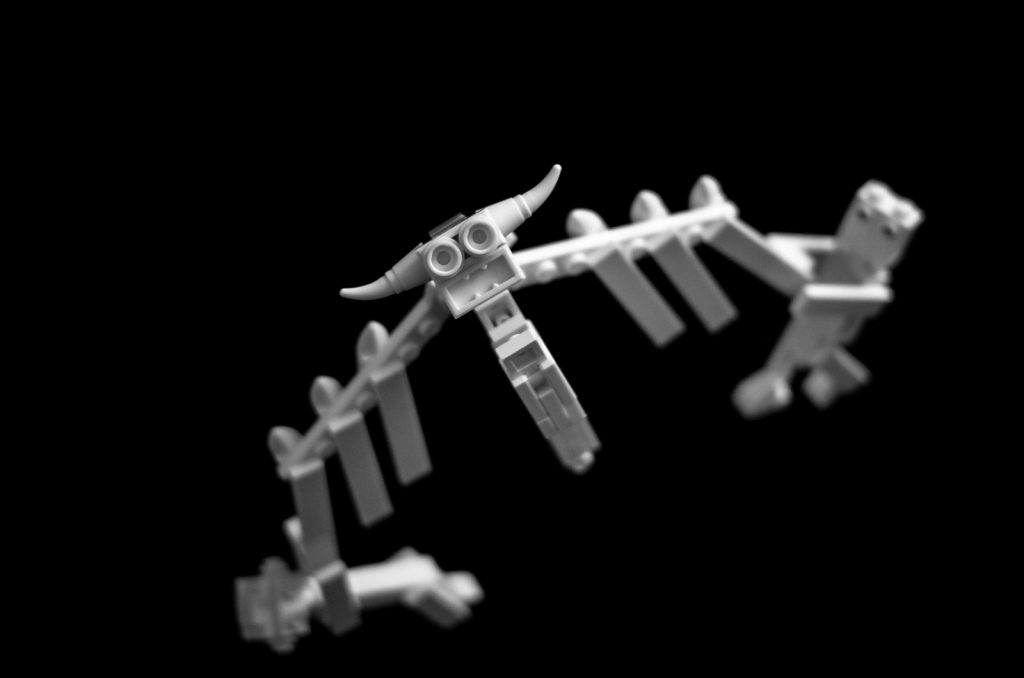 Or more specifically, flying away, as you can see in this picture. However, it’s not a clean cut at all. I wanted to build something positive, an angel or a fairy, but it turned out like this. Although it has wings and it flies it has horns on its head and spikes on its wings. These details make it fearful and disgusting.

It’s not easy to make such a tough decision. It provokes some ‘unexpected’ and unpleasant feelings. For example the grief, the loss: 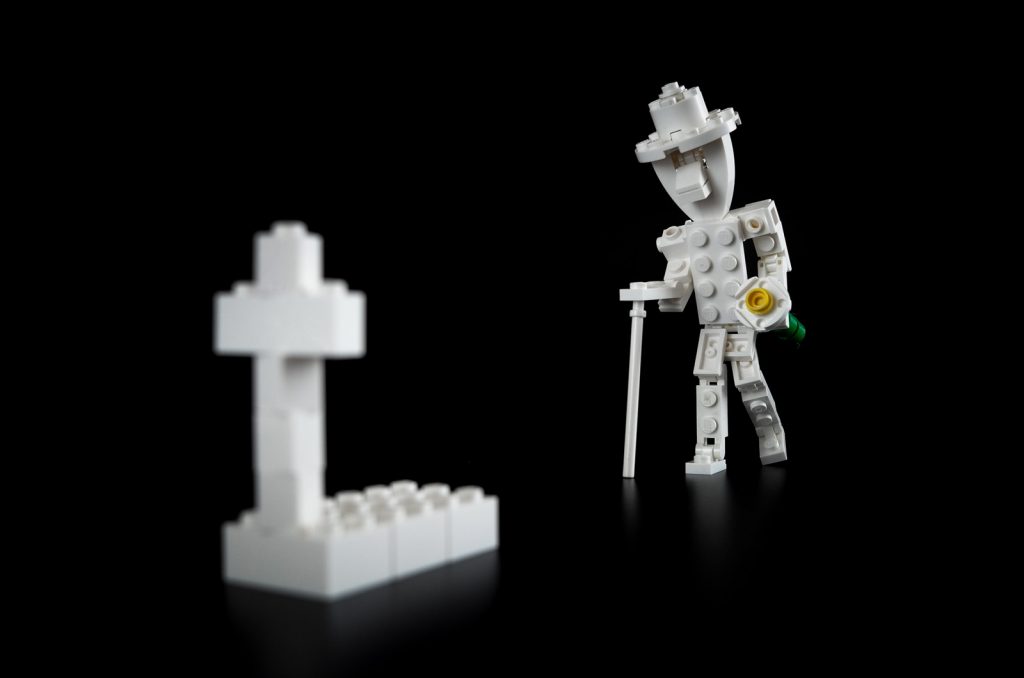 In my head leaving means something that is irreversible like death. That’s what this model tells me. Since it’s final, there is nothing I can do about it, I have to accept it.

I have lots of dark fantasies and nightmares regarding my future. 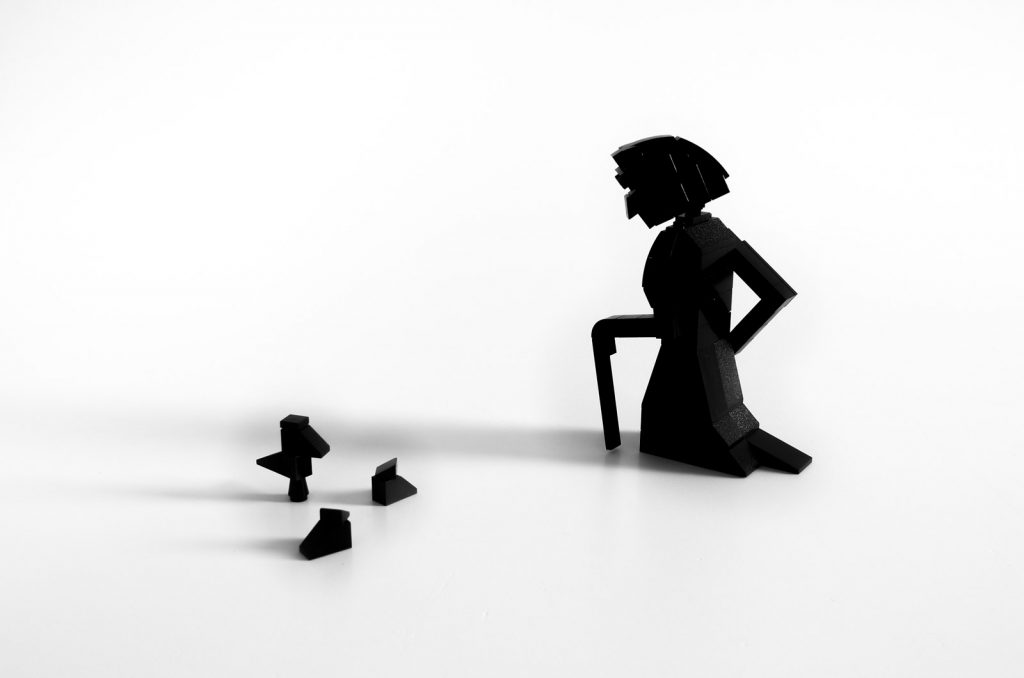 Sometimes see myself as a bent old lady passing by a bird family. I look at them and see them being happy and graceful. Which reminds me of all those things I have to leave behind. Those birds represent my regrets. This makes me sad… and I don’t want to become a sad, depressed old lady. 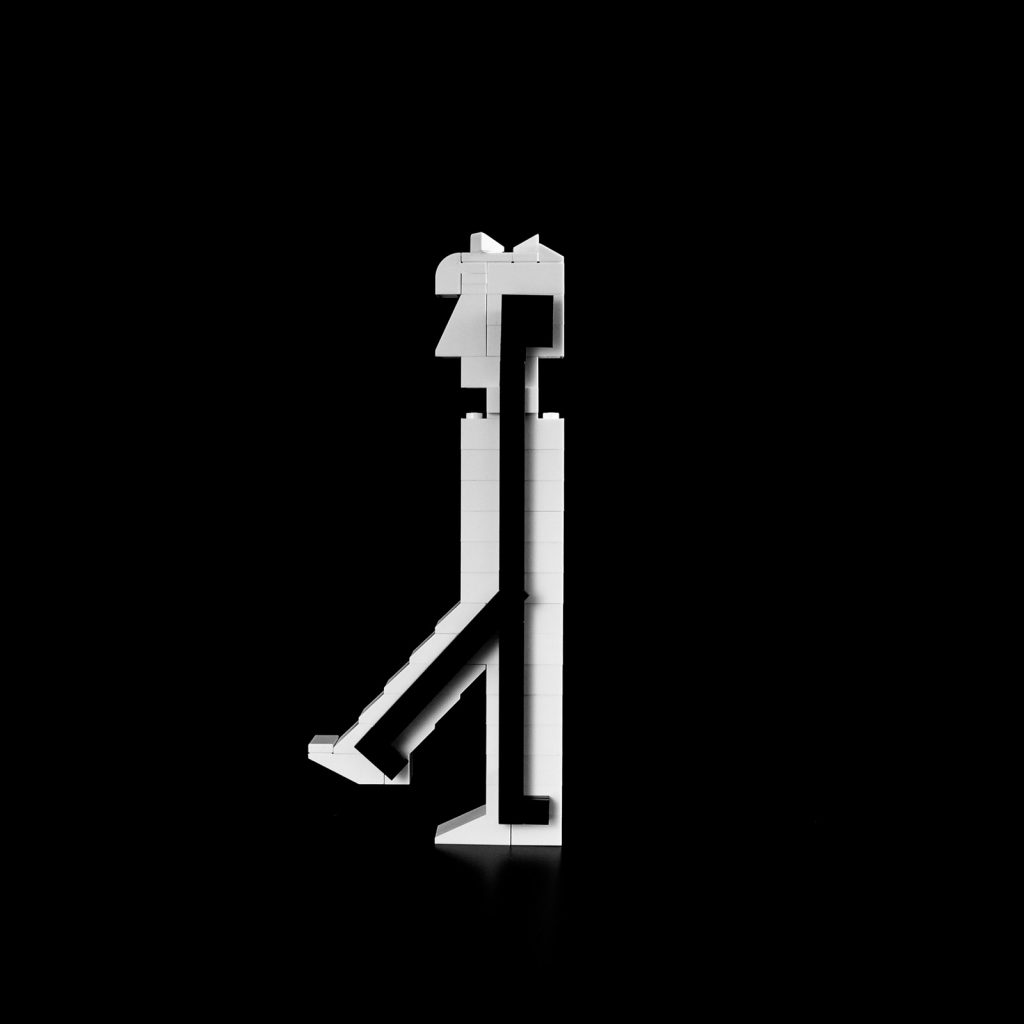 Although the decision has already been made I still have doubts. I’m still uncertain. This model is not about what to do, but rather how to do it. He’s definitely going, he just doesn’t know where. This represents the disturbing thoughts and chaotic feelings which I need to sort out. This means I’m not ready yet. However I stop writing now.

Although this post ends here it’s not the end. It’s the beginning of something new. This fall I’ll launch my own blog on innerbrick.com. It’ll contain posts similar to this (heavily illustrated short stories). So stay tuned…