Art of the Blur

Even before Shelly asked me to provide my own two pennies worth (I am British after all, cents just wouldn’t do) I had read many of the previous ‘why’ articles and considered what answer I would give. And now to have been so kindly asked, I wanted to provide something new rather than covering similar ground to the past entries of others. You see I’ve always had a problematic need to seek my own uniqueness. From my point of view, I’d assume as photographers we all reasonably know or can at least to relate to the reasons why each of us does what we do. We’ve come together from all over the world after all, through the Internet because we’re likeminded people. And for me this means it seems a little too obvious for me to tell you all how I’ve lived with Lego all throughout my life, or profess my undying love for Star Wars and how I’m influenced by movies and the great Hollywood machine. I’d hope (rebellions are built on that by the way) that my photography would showcase these things without a need for any explanation.Therefore I needed to find a new angle, and I’ll be honest, after days of writing and rewriting opening paragraphs with absolutely nothing to say that didn’t feel like it had already been said, I was lost. So I went back to Shelly’s original message perplexed and looking for any loose thread that I could follow out of the mess I’d put myself in. And there it was, the solution, staring me in the face, “Tom, I’m really enjoying your blur images.”. Inspiration! And as usual it had been there right from the beginning, but as is common for me I just missed it the first several dozen times around. D’oh.So the question becomes not why do you take photographs of toys, but why do you take incoherent blurry photographs of toys?Having had an on and off relationship with Lego photography since my university days in the early 2000s (I really should have stuck at this a lot sooner), I’d never really thought of using other toys, then came Star Wars: The Force Awakens (I love that film so much) and a Christmas gift of some Star Wars Micro Machines. These have since turned into Hasbro Black Series die-casts and now into Bandai models as well as a variety of action figures and other die-casts, and now I have a host of spaceships, superheroes and international rescue vehicles to play with.

Nothing to report Black Leader

My early photographs with these toys combined the macro photography skills I had been honing with Lego and shall we say, a smidge of Photoshop work to combine with various backgrounds. I found used images online or trawled through old holiday snaps (skiing trips became invaluable for this) to create digital worlds for my ships to fly through, and tried to create shots akin to the likes of Johnny Wu, Matt Rohde or Vesa Lehtimäki (I set the bar high and went after the greats).Quite quickly and rather unsurprisingly I realised that I was coming up somewhat short when compared to the work of others and concluded that a lack of realism was the key problem. It felt too obvious that these were toys bobbing about on wires in front of mini backdrops. As mentioned I have tried larger more detailed models (this process is on going as the models get bigger and bigger). And although it helped it didn’t solve my problems.The Force Awakens has rekindled an old obsession with Star Wars for me, some things come and go during our live but they never leave us. Which prompted to me that due to current technology spaceships in films could now swoop, twist and take us on rollercoaster rides when compared to those from the older movies. Now, here comes the first eureka moment; if these things were real then they would be moving, and at very high speeds. I watched it over and over (which was a terrible, terrible shame) trying to understand why I was lacking this sense of motion in my photographic efforts that were so much easier to showcase on film. In an effort to understand this I turned to sports photographers, particularly motorsport, hoping to find a way to capture a sense of movement and purpose in a still image. But that is just what I found, still images. Many photos were clean and crisp and caught perfect moments with super high shutter speeds, but they still felt static and lifeless, almost a documentation of what was physically there rather than what was happening and an exact opposite of what I was searching for.Then I discovered the work of Darren Heath (for those of you that don’t know he’s a Formula 1 photographer) and it tied in perfectly with what I wanted to do. Here was someone who embraced the sense of motion by allowing blur to occur and in turn embracing the abstract. It all felt very experimental and crazy to me that he’s allowed just play with his camera in the most “glamorous” and “prestigious” of settings. I mean, when you see his work they don’t necessarily look like racing cars, but you know these things are going very fast, just like you’ve paused live TV. 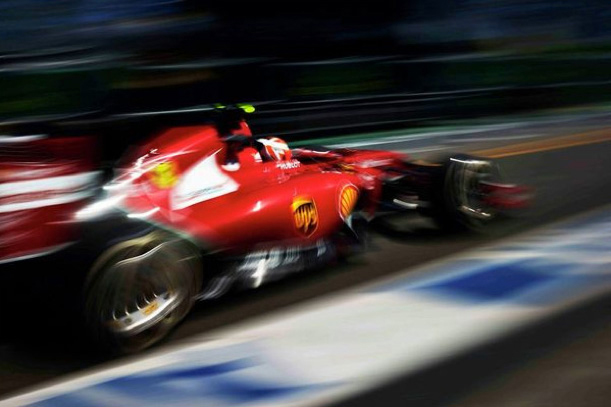 And there it was, the second eureka moment. I wasn’t going to create dioramas with spaceships in. I was going to pause movies, to embrace the abstract and try to give a true feeling of movement (I feel the need… The need, for speed. AHA). So that’s exactly what I did; I went back and paused the Millennium Falcon and Tie Fighters and X-Wings in flight and took still upon still, each more abstract than the last. I now had my endgame, to try and toe the line between the abstraction of speed and the visual identities of my subject matter. Now it was just a case of figuring out how to achieve it…But, that wasn’t the question, was it? This after all is a series about the whys, and not the hows.