My Love for Star Wars

…or why Leia, Rey and Jyn are so important to me.

I want to thank Shelly for inviting to me to write another post for the Toy Photography blog.  Two of the topics that she suggested are:  “Your love for Star Wars” and “What is so important about Leia, Rey and Jyn?”.   This got me thinking: why do I love Star Wars and why am I drawn to these characters?

I’ve been a fan of Star Wars since I saw it in 1977, in the theater with my family.  I remember the excitement and buzz over the movie and I remember the very long lines outside the theater.   The special effects were amazing but I was most awed by the story and the characters, especially Luke and Leia.  Leia made a big impression on me because she was one of the first strong female characters ever portrayed in the movies (at least the movies that I had seen at that age).  I also enjoyed Luke Skywalker’s story and his journey from being an “average” person to a hero and Jedi Knight.

Luke and Leia became my childhood heroes so it’s no surprise that the Luke and Leia minifigures were the first minifigures that I ever photographed and posted on Flickr. In fact my love for these characters inspired my first real theme which was my “Skywalker Family Fun” series, which focused on Leia, Luke and Darth Vader doing family activities together. 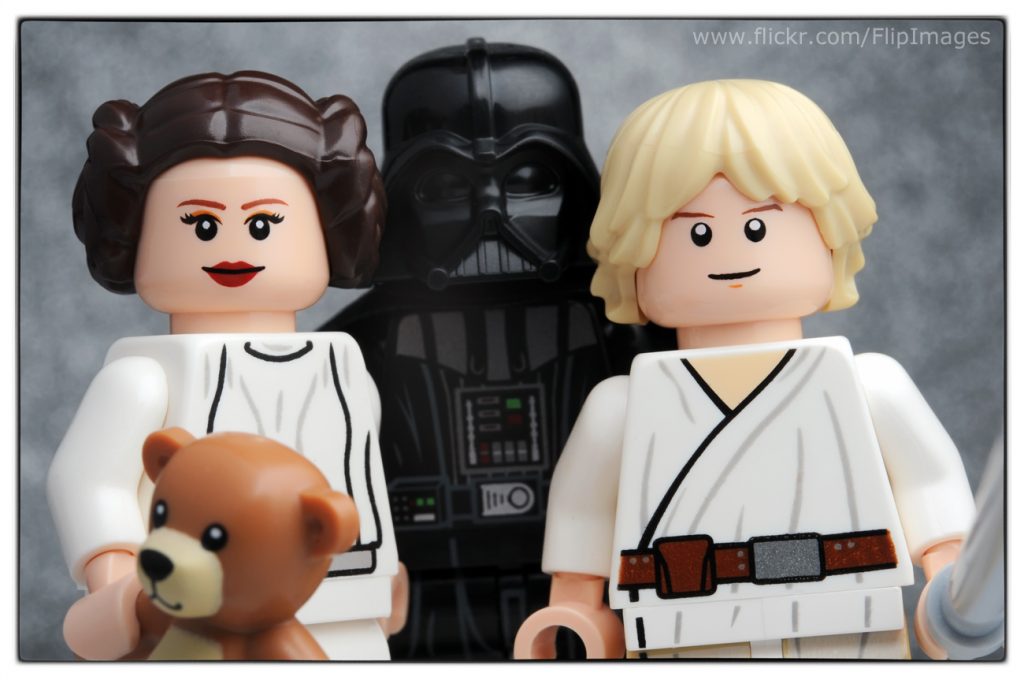 While I don’t find myself taking as many Skywalker Family Fun photos as I used to, I do still find myself wanting to take photos of Leia, Jyn and Rey.   Why do I keep photographing them?  As a woman, I think it’s natural that I would identify with the female characters more than the male ones but as I thought about this question, I realized that I don’t have any photos of Padme or some of the other female characters.   So what is it about Leia, Rey and Jyn that keeps me gravitating to these characters and minifigures?

Leia represents a tough, confident female character who takes charge in difficult situations and isn’t afraid to stand up for herself. She’s also smart, witty and funny, which captivated me as a child. She doesn’t just stand around and wait for the guys to tell her what to do, she takes charge of the situation.   She was completely different than any other female characters I had encountered before, so I was awestruck. Leia is one of the main reasons why I fell in love with LEGO photography. Once I began taking pictures of the Hoth Leia minifigure, I was immediately impressed by her details and expression.  I tried to recreate every scene that I could think of that included Hoth Leia and then I started buying every Leia minifigure I could find. 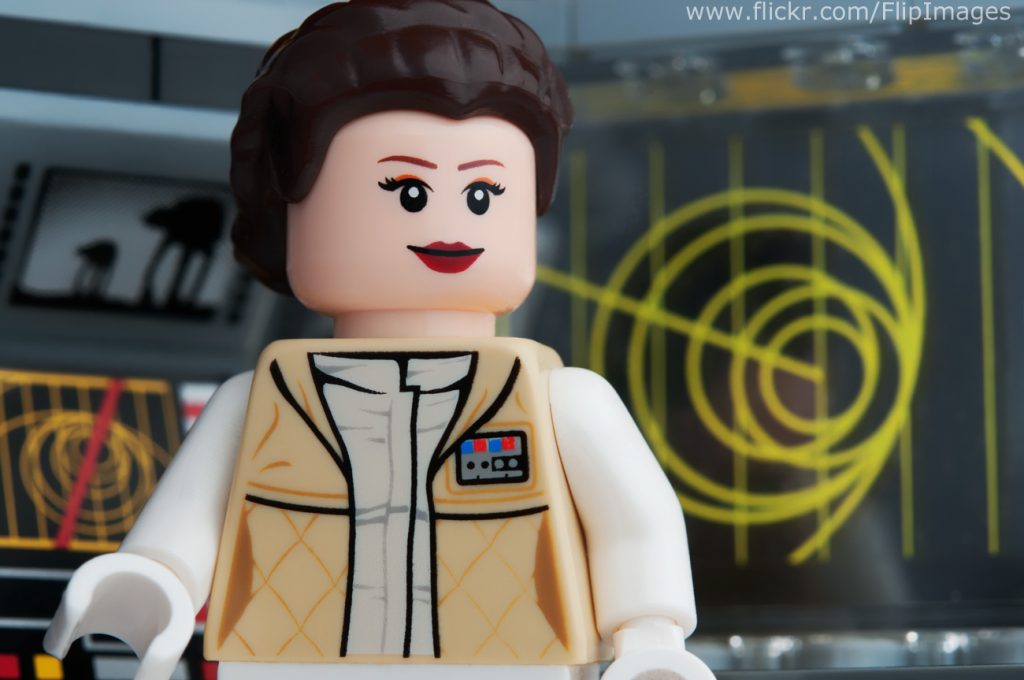 Leia will always hold a special place in my heart – especially now that Carrie Fisher is no longer with us. Carrie Fisher’s passing has affected me more than I can express and I haven’t yet been able to photograph my Leia minifigures but I know that will change some day and I’ll return to photographing Leia again.

To me, Rey is the first female character that we see in the Star Wars movies who has the physical strength to challenge the guys.  She is also the first female character that we get to see in a lengthy lightsaber battle (I know there were female Jedi in the prequels but they didn’t get much screen time).  She’s also very athletic; she’s strong mentally as well as physically. Not only does she defeat Kylo Ren in a lightsaber battle, but she uses his own mind games against him in the interrogation scene.

As a kid, I can remember wishing to see a female Jedi in the Original Trilogy – especially after it was revealed that Leia was strong in the Force too. Sadly, that didn’t happen but at least now we’ll (presumably) get to see Rey training to be a Jedi and I can’t wait to take photographs based on those scenes. 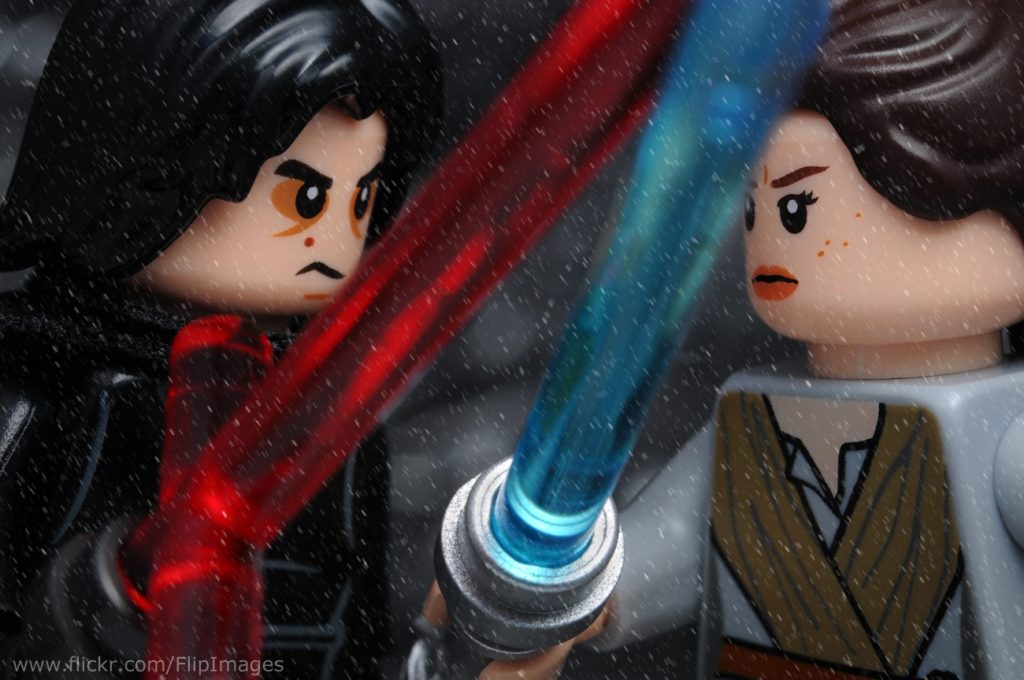 Jyn is strong, tough, determined and brave.  She’s not afraid to stand in front of the Rebellion and try to convince them to go to Scarif to get the plans and she is not deterred when they tell her “no”. Even when faced with a monster weapon, such as the Death Star, Jyn never gives up hope that it can be destroyed and is willing to sacrifice her life to get those plans. She also grows as a character from the beginning of the movie, where she is a loner and doesn’t trust anyone, to the end of the movie where she’s part of a team.  She’s strong willed and tenacious, which I think are very admirable qualities.

As for LEGO the version, the Jyn minifigure is probably my favorite Star Wars minifigure since Leia.    I fell in love with her expression and with her cloak which can be used to represent Jyn’s outfit on Eadu or Jedha. I feel that this little piece of fabric adds a lot of visual interest and realism to Jyn’s portraits. To me, Jyn is an inspiration and she has quite a few motivating quotes in the movie that I’m hoping to recreate in photos. 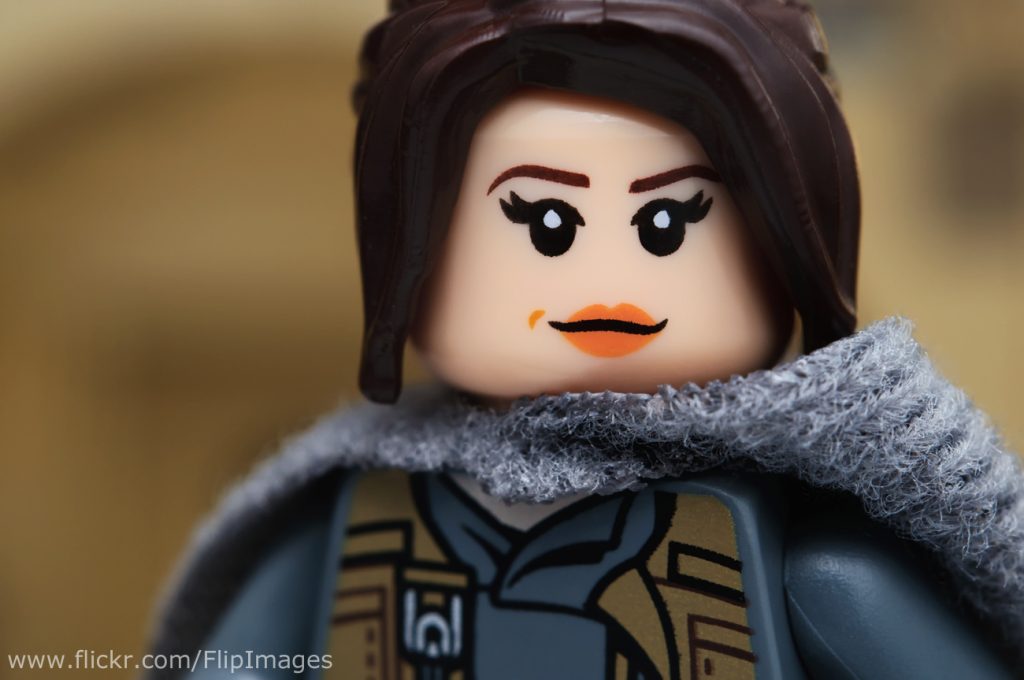 For me, the Star Wars Universe is full of interesting and inspiring characters and I don’t mean to leave anyone out by focusing on these three.  I think the reason I’ve fallen in love with Star Wars is because of their wonderful and progressive characters and I’m grateful that we have these mini figures that provide us with unlimited photo possibilities.   What are your favorite characters from the Star Wars universe?  Who do you relate to the most?