Through character development in Lego photography, I’m able to explore new ideas by putting myself in the place of my mini figure counterparts.  I try to think how this character may think. I locate scenes and backgrounds that match their personality.  It really brings the toys to life for me.

I’ve found that having some characters with ongoing stories is a great way to help when a slump in creativity hits. I’m not sure what it’s called in photography… photo block maybe? Anyhow, I’ve found it useful to have several characters to lean on when the creative juices are running on fumes.

The first character that I developed in this way was the Lego Prospector from series 12.  I picked this character because he reminded me of experiences I had as a kid prospecting with my grandfather. His suspenders were spot on; my grandfather was the only person I’ve ever known to wear suspenders, and he was also a successful prospector.  I named my character: Orval Brickers.  I figure in order to develop a character you need a name.  A name tells a lot about someone without giving their entire history. Orval is an old style name which gives my character a sense of place and time; it also was conveniently the name of my great grandfather who was also a prospector. (As you can see it runs in the family.)

I’ve spent many years prospecting out in the hills of Utah and I know the story well.  It was easy to relate these experiences through a new set of eyes. I can share stories and beliefs that are my own. This gives the character an authentic voice and I believe makes him more ‘real’. 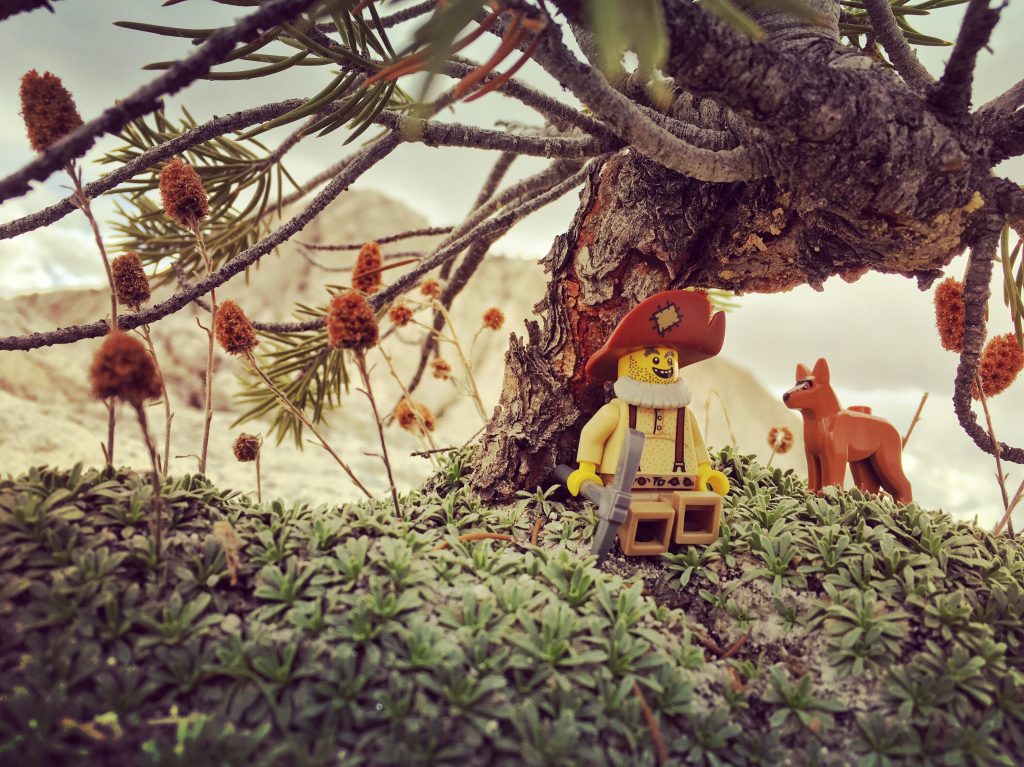 Orvil takes a breather from mining Crystal Peak. Trusty ol’Shep gives a lick and a whine…

The next character I came up with was using the Lego Zombie businessman from the Monsters series 14.  I named him Theodore, or Ted for short.  At the time I created this character,  Theodore was the least scary name I could think of for a scary zombie. Ted was always striving to eat braaains but he could never find any! This served me well during the election year; I was able to use some politically incorrect references when it came to braaains in politics (or lack thereof). While Ted is the wanderer type that usually keeps to himself, he enjoys classic cars. This has led me to visit car shows and car lots around my hometown in search of appropriate settings.

Because Ted is a zombie, I’ve also found interesting spots in undergrowth of bushes and lonely places in the desert to photograph him. I’m always on the look out for any good post-apocalyptic setting. The erie feeling often found in abandoned places are a perfect fit. 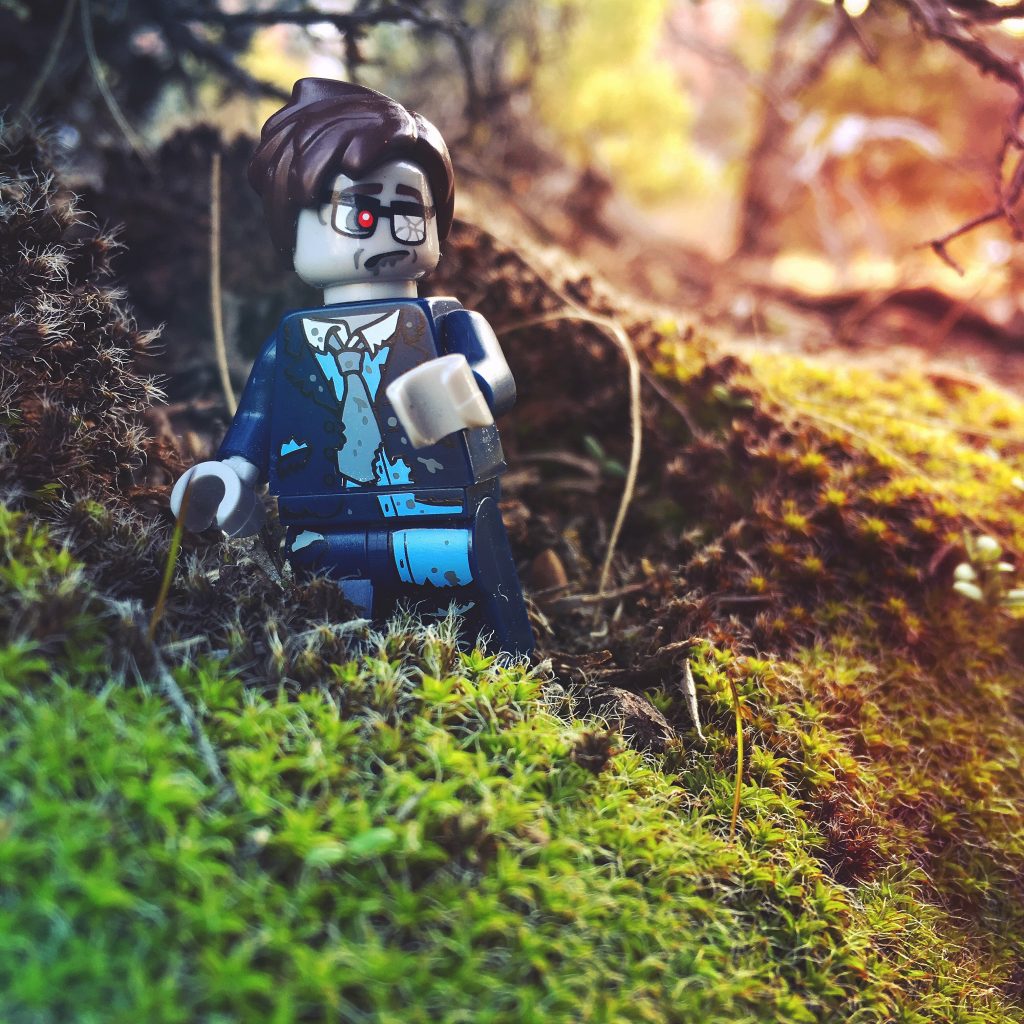 Ted searches in the undergrowth for elusive braaains

Another character I want to develop is the Lego Hiker in series 16 which I named Jim Bricksters. While Jim began as an outdoorsy type, he underwent a transformation after meeting Vitruvius in the red rock sanctuary. By adding the grey grandma hair (cmf series 11) and the beard from Gandalf the grey he was transformed into a hermit / Edward Abby type, who enjoys exploring nature. Jim is the perfect character for Southern Utah, where I live. The deep red orange rocks and cliffs make for an excellent backdrop and the scenery fits Jim so well.

Trying to get shots of Jim have led me and my real hiking buddies – my three oldest kiddos – on many fun adventures exploring off trail.  I have always avoided trails… they seem too trodden and forced when it comes to me enjoying nature.  That trait is something I share with Jim. 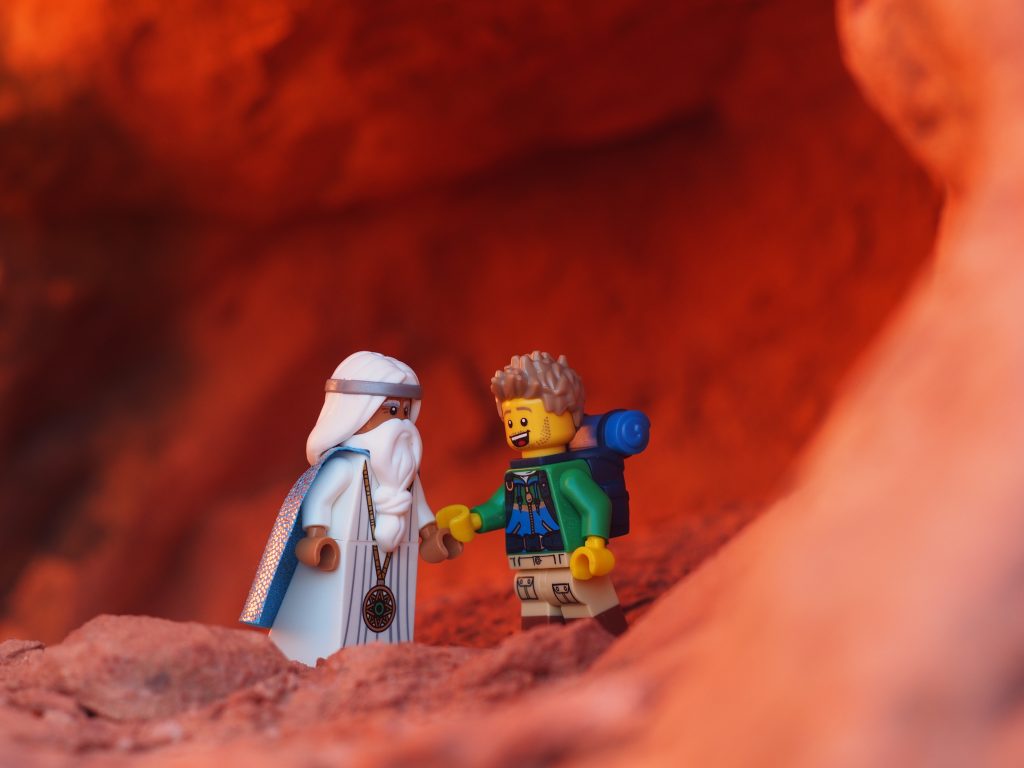 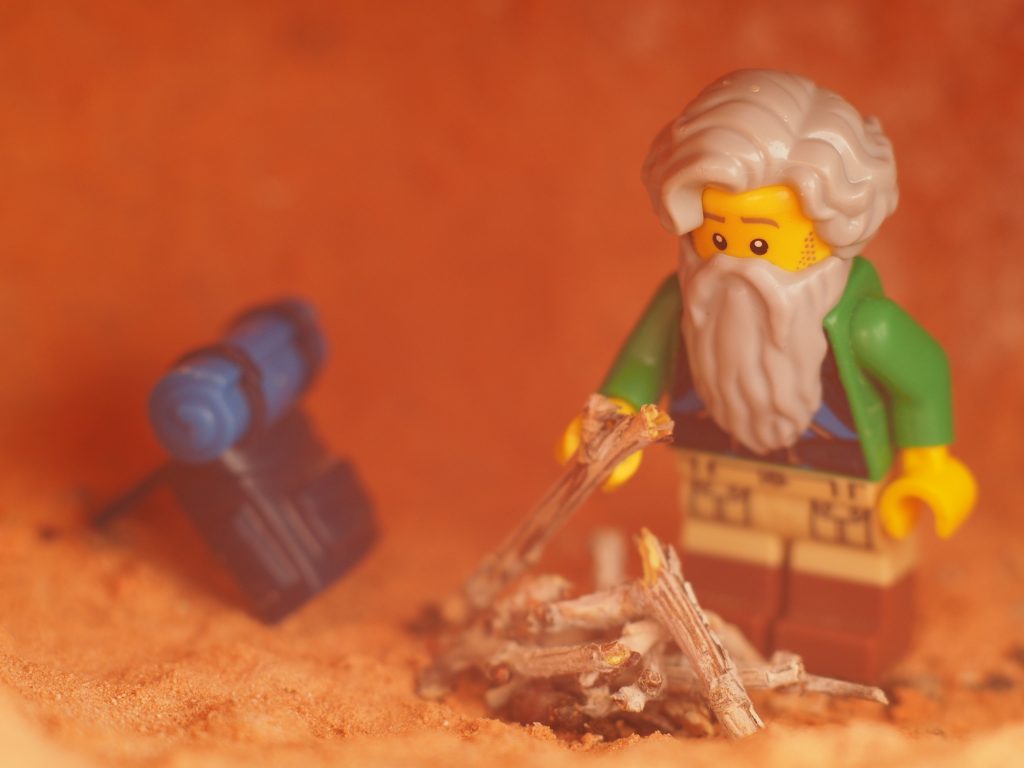 Prepping camp in a redrock cave. Jim can’t stand tents – he likes to sleep under the stars most nights… but a storm is rolling in.

My most recent addition is Lenny the Raptor. I ordered the green and blue Lego raptor from Bricklink on a whim because I’d seen so many excellent shots and was inspired to photograph him myself.  I was off to get an epic shot with a Lego ET and a red bike but ET didn’t fit very well. While ET looked weird, the raptor fit easily and looked hilarious. And that is how the character of Lenny was born!

I picked Lenny as a name because it was very similar to Benny from the Lego movie. My goal is for Lenny to match the happiness and easy going personality of Benny. I don’t usually think of raptors as funny and happy-go-lucky; mostly I think of hiding in tall grass and blood running down waterfalls… thanks Jurassic Park. Lenny, the silly, fun loving raptor blows that vicious stereotype out of the water! Lenny is my current favorite character; he’s lead me to discover new techniques. I use camera angles to hide other elements that keep him steady.  His tail is the best kept secret! 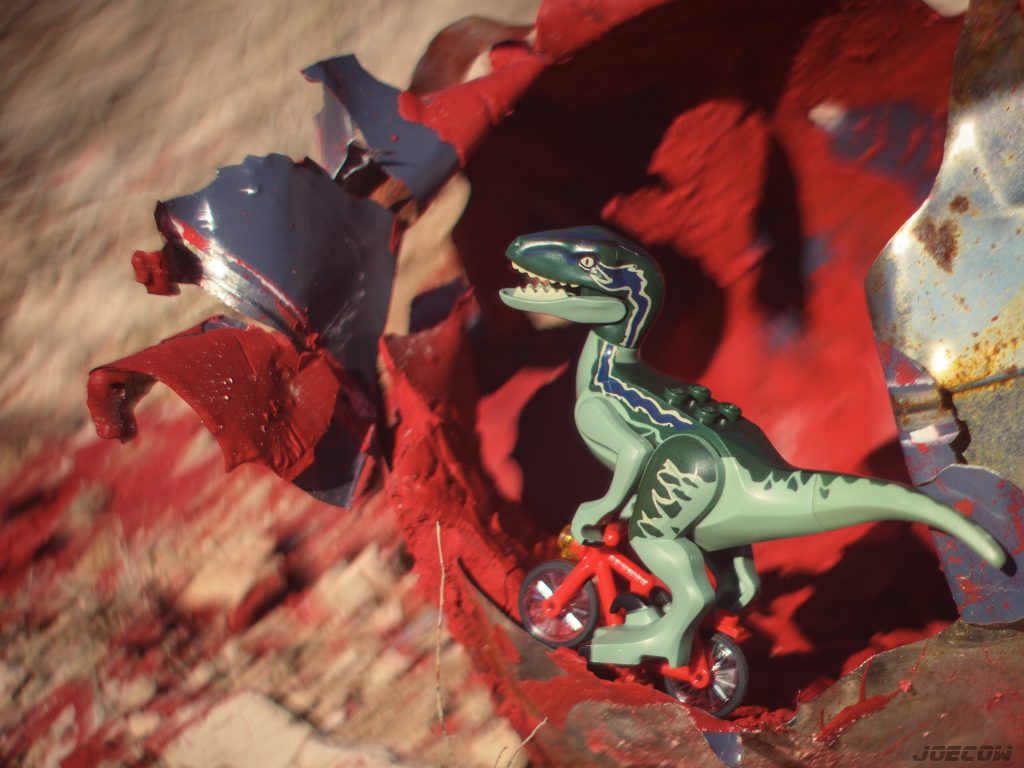 My goal is to have fun with toy photography.  I’ve found that developing specific characters has made my photography better.  The stories flow more naturally and easily plus I find my shots are more interesting and entertaining!

Now that you’ve met some of my character creations I’d love to meet some of yours in the comments below.  How did you come up with them? What is your inspiration? Are they based on real life experiences? How do you feel about creating characters?

About the Author: Joseph Cowlishaw