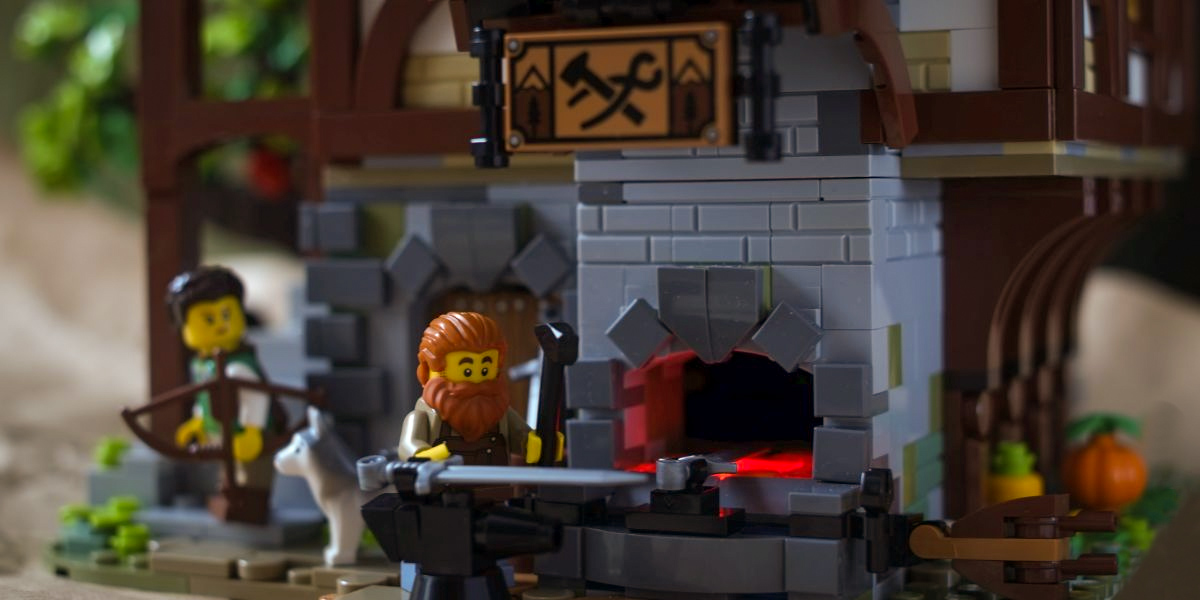 The LEGO Ideas team, of course with participation from users of this platform, again takes us back in time. After last year’s Pirates from Barracuda Bay, a Medieval Blacksmith arrives in the hands of LEGO aficionados and collectors—in the eye-friendly house of a reliable craftsman.

However, while the Pirates from Barracuda Bay threw us straight into a whirlwind of breathtaking adventures, either on an a superb ship or in a secret pirate hideout, the forge takes us off the beaten track, in the outskirts or even further, to the village’s hedges, away from the mighty walls of LEGO’s Castle series, and far from epic battles and intricate court intrigues.

The Medieval Blacksmith set impresses with its architecture at first sight. An arcade house with half the timbered/fachwerk wall construction stands out first. The roof’s fancy finish is impressive with carved ridge beam and decorative rafters, and the stone, ground floor provides a solid foundation for the entire structure, it looks great and contains the forge inside. The real decoration of this house is the high arcade above the stairs, built of slender, carved pillars.

There are many details that complement the shape and make the set more attractive, like the crooked apple tree leaning over a small well and surrounding it with thick roots, wood storage under the stairs or pumpkins ripening under the windows of the forge. Bricks in sand green placed both in the walls and on the roof simulate moss, which is a nice addition. The roof is clad with solid looking shingles, thinned out here and there. A massive chimney for the blacksmith’s furnace also attracts attention, rising almost the entire height of the building.

The building differs significantly from its prototype. The original design is more “realistic” (if a building made of bricks can be realistic at all)—a shingle on the roof is chaotic and uneven in a basic project—while the ready set gives an idealized vision of this building, like taken straight from a fairy tale. And it looks smaller.

However, this is not a major issue, the house still looks great. It is no different with the interiors.

When it comes to the structure of the storeys, Medieval Blacksmith is actually modular, but it has been moved several hundred years in time. The individual sections of the house are placed on top of each other, held by a few studs placed around the perimeter of the walls. This construction is sturdy, and at the same time allows you to easily remove individual floors.

The ground floor of the building is occupied by a forge, and its hot heart is a huge blacksmith’s furnace. The creators of the set were well aware that the furnace requires a bit more than just orange transparent tiles, so they equipped it with a light brick, which is activated cleverly by means of an equally cleverly constructed bellows. It’s a very nice accessory that emphasizes the importance of this part of the set. The light of the brick pleasantly illuminates the furnace cavity and is ideal for close-ups, but to shoot photos from the outside, it was necessary to “raise the temperature” and use an additional lamp to illuminate the blacksmith minifigure and the anvil.

A glance inside the forge reveals the blacksmith is also a talented armorer. Solid shoulder straps shine on the hanger, while the visor of a great helm glares from the shelf. Of course, there are many details that create the atmosphere of this place, such as tools, iron bars and rods, a whetstone wheel or charcoal for burning in the furnace. Such small elements, when gathered together, really build the character of this interior.

The kitchen is also full of character-building details. I am very pleased with the butter churn, which I remember from my childhood. No, I am not related to a Highlander—these archaic devices were used in the Polish countryside in the 1980s, including at my grandmother’s house.

The colorful chairs also deserve attention—check out the ingenious use of axes as backrests! Yes, they are a bit too big for minifigures, but they look so nice! It’s also fascinating how a few conventional elements, such as a carrot and a “slice” of a carrot, can bring life to a plastic interior. Our imaginations do the rest.

The last floor is a bedroom that seems to double as some kind of office. There are fewer details here, including an oil lamp, a pen, a desktop with paper card and “Once upon a time…” (Are the smith and his wife also fabulists?), but the space is filled with grand bearskin rug and a carved bed covered with a patchwork quilt. The method of mounting the roof is interesting, as it is not attached on studs in any way, but rests loosely on two panels 1 x 2 x 1 (piece number 26169).

This is a novelty for me because it is an uncommon technique, although I admit it makes getting into the room much easier. The pillar in the center of the room and the arches also draw attention and make the interior more attractive.

The set includes four minifigures: the blacksmith and his wife, called Archer, and two Black Falcon Knights—female and male. These knights refer to the Castle series and are a nod for fans. The Black Falcons have a nicely designed horse-drawn cart. I am a slightly disappointed by the lack of reins here, the minifigures sit high on the cart and their outstretched, empty arms look funny.

The knights are well equipped and even have an impressive halberd in stock—they apparently need more weapons to defend their lands. I suppose the smith’s wife is not an archer by accident. Blacksmithing, including making weapons, is a lucrative profession that requires protection. I’m sure the blacksmith can count on his wife’s accurate eye in the event of a possible threat. An archery target hangs on the apple tree, where she can practice her form. They can both count on their faithful husky dog, too, I guess.

The Medieval Blacksmith is a great set, forged with care and artistry. It may even be too perfect—it could use a bit more weathering, but that’s a matter of personal preference. Let us summarize the opinion of my wife, an architect, who helped build of this set: It’s beautiful, it’s a great piece of architecture. It is worth emphasizing that the set looks very nice, not only from a distance, which is relatively easy, but also from a short distance. This is due to the compact and homogenous shape, and nice architectural details. I hope I don’t have to emphasize that the set works great in front of the lens. I really enjoyed shooting it and I hope this is clearly visible in my pictures.

If you have enough gold in your purse, I recommend this set as highly as the temperature in the blacksmith’s furnace.

P.S.
It is interesting that LEGO Ideas releases sets referring to the cult series non-chronologically, because first there were Pirates—the age of sails and rapiers—and now the Middle Ages—the era of swords and axes. So, if the non-chronological trend continues, will the next set take us to the age of space suits and robots, or will the chronology win and take us back to the time of stone and caves?

Thanks LEGO for providing this set for review.

Good morrow, good people! While you’re here, we invite you to  sign up to our weekly Toy Photographers email roundup where you’ll get a recap of all the week’s babbling. And while you’re at it, you should definitely join our MeWe community! We hold monthly contests with prizes and lots of other cool stuff.

Tomasz Lasek (@tomekskog on Instagram) has been a toy photography eulogist, lens-through-looker for over 7 years.
View all posts by Tomasz Lasek →