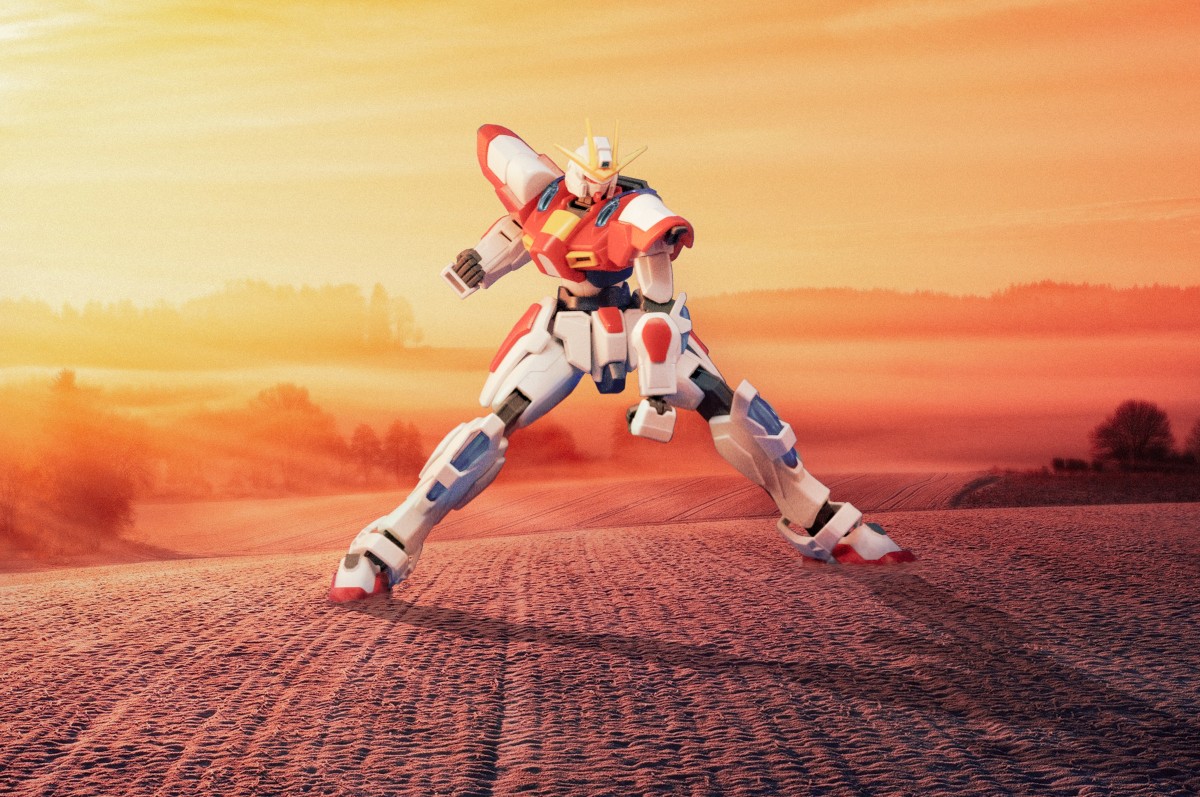 Gundam has been around for 40 years. That means 40 years worth of giant mecha-based toys. But despite the sheer amount of Gundam figures available, I don’t see many toy photographers using them.

Perhaps that’s because they’re not ordinary action figures: They’re model kits. Don’t let that deter you though. There’s a lot of fun to be had with these figures.

But wait! Before we go any further, let’s rewind a bit. What is Gundam? Maybe you’ve never heard of it. I certainly had little to no idea what it was until recently.

Gundam is a long running anime series that, similar to Transformers, was created to sell toys. The main focus of the show(s) are the Gundam, special high performance mobile suits created to combat the ‘normal’ giant mecha that fight on the enemy side.

If you want to know more, I suggest you Google it because explaining Gundam would take too long and we have more important things to talk about. Namely, the toys.

The kits come in multiple “grades.” Each grade has a different size, price and difficulty level. I personally have only tried High Grades (HG) so far. HG kits are a good starting point. They’re fairly simple, cheap and look pretty slick. The other grades include the pricier Real Grade, bigger Master Grade, chibi Super Deformed and massive Perfect Grade (not to mention the Beargguy and Haro lines). Again, I have yet to try anything other than an HG.

There’s something extra satisfying about photographing a figure you built yourself. Sure, pulling a new figure all pre-assembled out of the box is exciting, but building the figure adds a whole new level.

It is an awesome feeling to look at a final photo and be able to say, “Dang, that figure looks good because I made it look good.” The time it takes to assemble a Gundam can spark ideas for photos as well. Customizing Gundams is an option, too. The only limit is your imagination.

What about posing though? Building and customizing is all well and good, but personally I like toys with articulation. There’s nothing more frustrating than an amazing looking action figure that lacks in the ‘action’ aspect. Spoiler alert: This is not an issue with the Gundams.

Sure, there are the few duds out there. With more than 2,000 kits on the market, this shouldn’t come as a surprise. Articulation varies from kit to kit, but for the most part, you’ll have all the tools you need for epic poses. Pieces can pop off from time to time if you aren’t careful, but anyone who has used LEGO for a while should have no trouble.

Now we need to talk about the photography aspects of Gundams. Being that they’re 18-meter-tall mech suits, taking them outside and snapping some photos in the grass won’t give you the right feel. If you don’t particularly want to follow the rules of the Gundam universe, then you have no limits whatsoever. Go wild!

I personally enjoy the process of creating a photo within the rules of the universe, and I’ve found three ways to accomplish that. The first is building dioramas in scale with the Gundams. I respect anyone who is able to do that. As of right now, I lack the skill for diorama building, so I stick to the second method: compositing.

Using Photoshop, I put the Gundams into the real world, stomping through the ocean, or battling in the sky. The third way to photograph these mechs is very odd and hard to achieve. I’ve only shot one photo thus far that even touches this method. The easiest way to explain this method is anime style. Over-exaggerated action poses or dramatic static poses with extra effects and letters.

All three methods have their challenges, and a ton of potential. That’s Gundam, in a fairly condensed package. As I said before, this line of shows and toys have been running for 40 years, and there is a lot to take in. I only just started this branch of the toy hobby in December, so I’m very much a newbie here.

It’s been a lot of fun and I encourage you to give it a shot. Amazon and USAGundamstore.com have a ridiculous range to choose from. Like I said, there are more than 2,000 kits out, and more are being released every year. I look forward to seeing what you create!