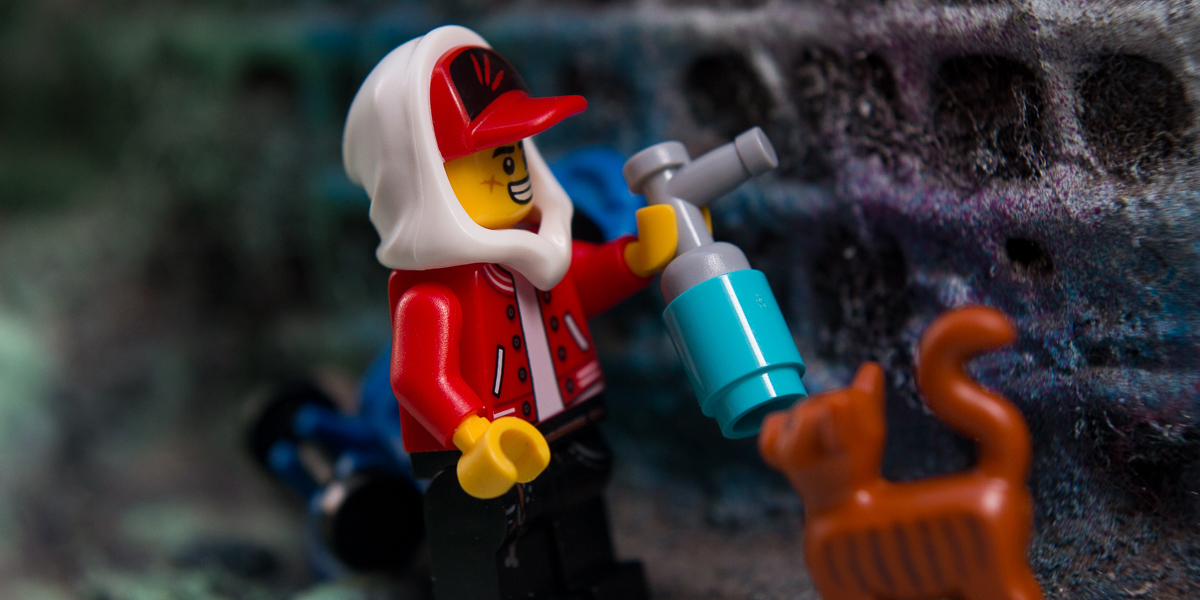 I should start by saying that as much as I enjoy taking photos of my LEGO, a trip through my back catalog reveals a tendency toward something resembling product photography shots rather than art images. I have a little experience with macro photography beyond the minifigure.

My go-to kit is my Canon 70D, and either a Canon EF 24-105 f4 lens, or an EF 50 f2.5 Compact Macro lens. In the studio, I tend to shoot with manual focus. In the wild, I’m more likely to try for autofocus, especially in the absence of a tripod. The 70D is an ‘APS’ rather than full-frame sensor, which might have implications for some of my results later in the day.

I was excited to be able to try a Lensbaby Twist 60, in combination with some macro tubes at the recent Toy Photographers Meet-Up in Melbourne. Special thanks to Shelly Corbett, who was able to bring a selection of different Lensbaby lenses for us to try.

It was a day of excitement, joy and experimentation, and I would also like to thank Brett Wilson for organizing the meet-up, as well as to acknowledge the distances travelled by some participants: Sunny and Vincent from Singapore, as well as Shelly from the USA.

The lens is a manual focus, and did not provide any information for the camera as far as aperture used, or indeed its identity. I was also handed a set of macro filters to attach to the front of the lens to let me get a bit closer to my figures. My first step was to take my instant prop for the first hour or two on the day. Here it is, attempting to exploit a puddle reflection using my 24-104 lens at f4.

My first attempts with the Twist 60 involved trying to give some bubble wrap a new lease on life with a waterfront background. I pinned down the edge of bubble to the boardwalk with toothpicks because of the onshore wind. From time to time I feared for Edward’s future.

Here he is with a relatively closed aperture. Using the macro filter with the small aperture, the water in the background was still relatively out of focus. Although the bubble wrap still looks like bubble wrap rather than the water I was hoping to create.

Opening the lens up reveals its ability to rapidly narrow the depth of field, and introduce significant bokeh. Below, Edward remains in focus, but the rest of the crew are taking on some of the bokeh. If you look at the printed feathers on the owl, as well as the some of the background bubblewrap, you can start to see some of the twist in the bokeh for which this lens is known, however, it was not entirely apparent to me just looking at the screen on the back of the camera. You can also see some of the vignetting present on the edges of the image.

At this point, after moving on from the edge of the jetty, I caught up with Shelly, and she was intrigued by the bubblewrap. We pinned it to a nearby grassy knoll, and brought out Sparkle Fairy Unicorn Princess taking Teddy for a row. It was here that the twisty bokeh really came to life.

Again, I was not necessarily sensing this effect while looking at my camera screen. My next move was to attempt a little studio shoot, with a bit of shelter, using some minifigures and glitter paper. In the first picture, you can see a reasonable amount of detail in the glitter, even though some “regular” bokeh is present.

Opening the aperture, we rapidly lose detail outside of the narrow depth of field, and we start to see the swirls in the glitter.

Now, I need to be honest: At this stage, I was having difficulty adapting to the completely manual focus required with this lens and, at the time, I was not really appreciating the beautiful swirls that were apparent in the pictures above. I returned to the Canon macro lens that I had more experience using.

This is a decision that, while feeling like I was being more productive at that moment, I now regret. In a nicely lit, wooded area there is no doubt the twisty bokeh would have been most apparent here. I hang my head in shame, and sob, thinking of what could have been.

Next stop was Hosier Lane, an area in the CBD, full of street art, as well as tourists, bemused by the toy photographers at work around the location. I still had my Canon macro lens on and snapped one of the youth up to no good. The background blurred away into nothingness.

I took the same subject from a slightly different angle and the twist in the bokeh is quite apparent toward the edges of the image.

That said, what I really noticed at the time was the brilliant separation between subject and background that this lens offered.

I found an obliging drainpipe and thought that it could be the appropriate place to put a ninja turtle.

In the first of these images I used a higher f-stop, and you can see the difference in the way the surface of the drain seems to sweep around a bit more in the second image.

My final image using this lens is this shot of Spider-Man taken in collaboration with Janan Lee (@spideygoeshygge). Here, I have good separation between subject and background but little “swirl.”

I was unsure what to make of this lens while in the field, but looking back on the images I took, I can see the twist in the bokeh becomes more apparent when there is detail to blur—bubble wrap, all-painted detail (or glitter), grainy dirt—and much less apparent using backgrounds with solid, relatively plain colors.

I found it difficult to fully appreciate the qualities that the twist brought to my images on the day. I certainly regret not using this lens in the forest setting, as I think the results might well have been remarkable. The 70D has an APS-C sensor (approximately 2/3 of full frame), and Lensbaby recommends using this lens with a full sensor camera for best results.

Looking at some of the images on their website, I can see what they mean: The Bokeh did not appear to be as obvious, particularly with macro shots, as with well-composed portrait shots. I find it difficult to determine exactly what effect the macro filters had on the bokeh, and I now see the subtlety of the effect, when viewed in-camera. I would document more efforts in the field more clearly, to get a better idea.

There is certainly a bit of a learning curve for appreciating what you are achieving with this lens. If I were taking it out again, I would be far more confident using it. My lack of faith early in the day probably meant that I missed the best opportunity to take advantage of it.