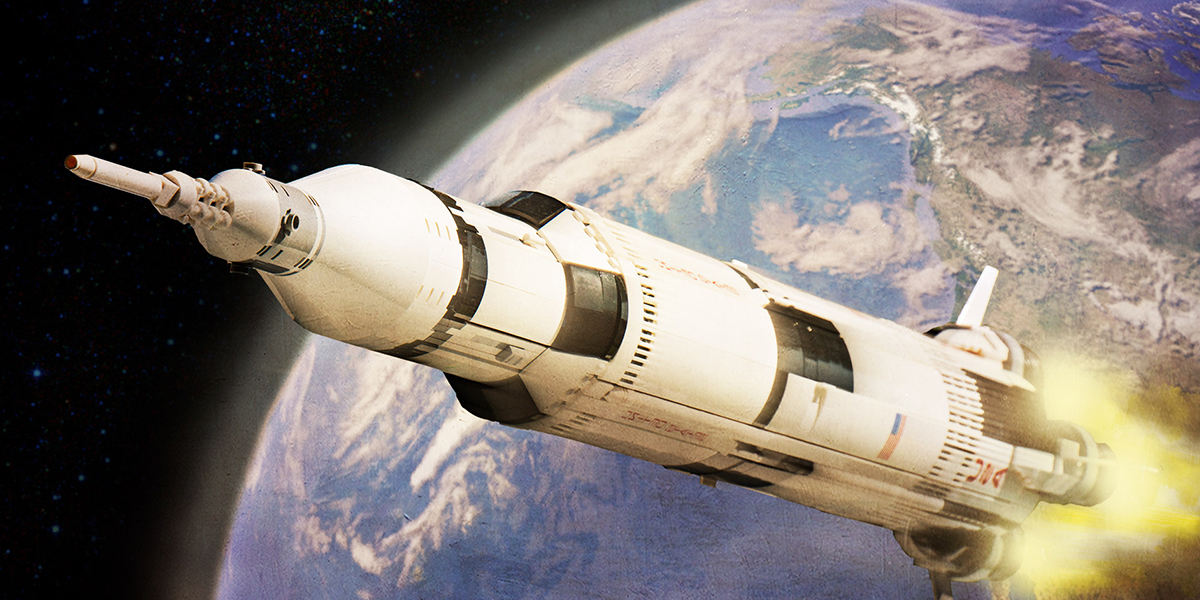 On July 20, 1969, Neil Armstrong became the first human to walk on the moon. How did he get there? In the most powerful rocket ever made by mankind, the Saturn V.

This year marks the 50th anniversary of the first time man walked on an extraterrestrial surface, and brought all our hopes of spreading our wings across the cosmos one step closer to reality. It spiked the imaginations of entire generations. So, this seems like the perfect time to take a closer look at the LEGO version of the Saturn V rocket.

So let’s deep dive and check out this mammoth and historic rocket set.

The LEGO Saturn V is huge both in real life and in LEGO form. The model stands 1 meter high (39″ for you non-metric folk). Despite being so tall, it is still far from minifig size, as it comes with scale astronauts that are only 1 brick high.

The build is actually quite fun, and uses a lot of unique techniques to realistically turn square bricks into a round rocket. The Saturn V has multiple stages (8 by my count) and this model can be separated into all of them.

The build itself is gorgeous. The set looks more like a realistic model than a LEGO set. There is no mistaking it – this is a proper rocket, not a “best we can get with square plastic parts” version. There are some tells here and there, but from a distance it is hard to see that it is made out of LEGO at all.

I haven’t actually measured the dimensions, but they look right, and feel correct to the real rocket. It is a masterpiece of LEGO engineering.

Aside from the rocket itself, the model also contains a fairly detailed (for its size) Lunar Module (the part that actually landed on the moon) and a separate, more detailed Command Module (the part that landed in the ocean at the end of the mission). However due to scale the Command Module is basically one cone brick with special decoration, and a few yellow balls to simulate the flotation devices.

The model also comes with 3 simple stands which can be used to hold the rocket horizontally, which is great as there is no way I could display this monster rocket vertically.

How Is It For Toy Photography?

This is a tricky model to shoot, both creatively and stylistically. Because it is not at minifig scale, it is hard to get proper scale with other LEGO bits. And due to its size it is awkward to position. I honestly had a lot of issues coming up with something creative.

I also got a shot of the LM being extracted from the third stage while in earth orbit.

As luck would have it I happen to have met someone who photographs real rocket launches from Cape Canaveral in Florida. His name is Erik Kuna, and he does some amazing work. You should definitely check him out.

I contacted him and asked if I could make use of one of his shots for a collaboration composite shot, where I could show the Saturn V launching from a real NASA launch pad. He sent me a photo of a Space X Falcon Heavy launching from the same pad the Apollo 11 launched from.

I then combined my shots of the model rocket with his shots of a real rocket, and made this shot in Photoshop.

Sadly, I can’t strongly recommend the LEGO Saturn V as a toy photography model. I just don’t think there is enough potential to make it worth the $119 USD price tag. Unless you want to recreate the historical NASA footage (which is a noble and fun pursuit in and of itself) I’d think twice before picking up this set with photography in mind.

However, as a model commemorating one of man kinds most incredible accomplishments, this model is definitely worth the money. It is also worth the shelf space, as it does take up most of my mantel in my den (tho it looks amazing on that mantel).

This is definitely a model you buy for the way it looks on your shelf, and not in your camera.