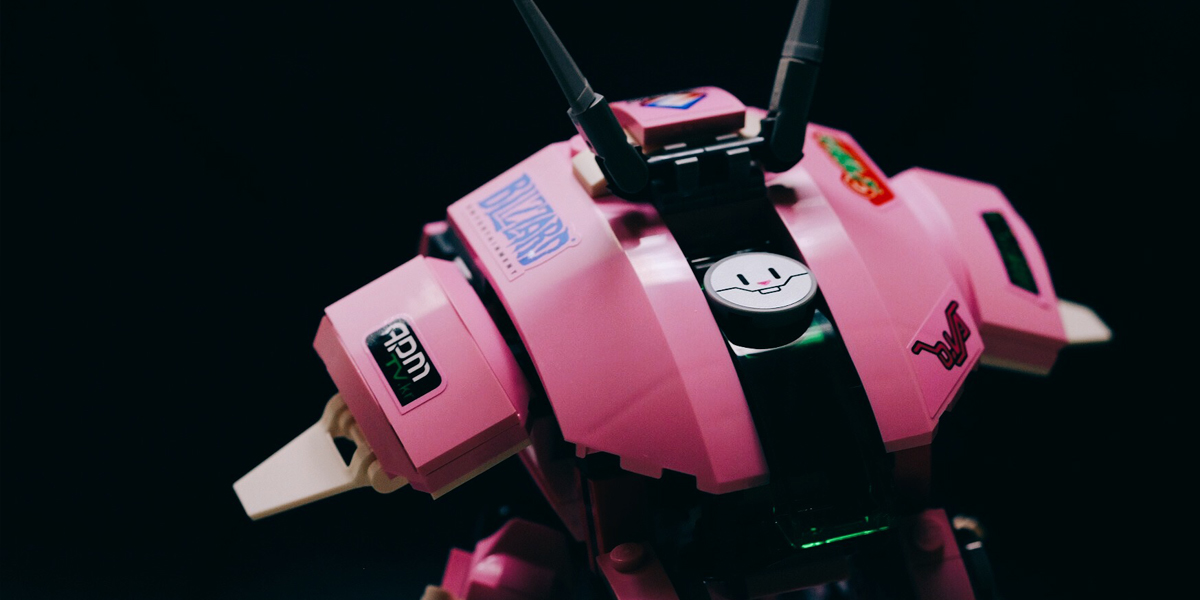 Okay. Full disclosure. I love Overwatch. I play this game near daily so there is no way in SR hell this review isn’t going to be bias af but I will try lol. When Shelly told me it was possible I could write about these sets, most fortunately for her, we were in a very public place and I used every ounce of self restraint to stop my voice from reaching doggy level decibels of squee.

For those of you who aren’t familiar, Overwatch is a team based, first person shooter video game featuring a colorful cast of heroes all equipped with very particular abilities and purpose. Backstory and character are fleshed out and reenforced by voice lines they say to other heroes in game, as well as a series of comics, and very charming, very well done Pixar-esque short films you can find on their official YouTube channel. (If you want a taste but have no prior knowledge of the game, I highly, most fanatically recommend watching “The Last Bastion”.) They’re so good it makes me wish they’d take a break from plucking out Mercy’s wing feathers and make a full length movie instead.
Half the LEGO sets are based on playable maps from the game. I received the first choke of Dorado and the point B section of Hanamura. Already you know the designers probably had limitations in how many pieces they could use which, I admit, was disappointing when promos of the sets were first announced. But as I was building everything, I think what they ended up with was done with care and love and knowledge of the game. Little things like the candles and faded posters that litter the evening streets of Dorado I came to really appreciate with every page that I built. I thought the sticker with one of Reaper’s victory pose in his Blackwatch skin was especially cute and thoughtful. And the minifigs they chose to include, Reaper and McCree and Soldier 76, was a nice nod to the annual Uprising event we had last Spring and the animated short, “Hero”. Personally, I would of preferred Moira and saving McCree for a Route 66 set instead, but McCree is probably(?) more popular as a character so this is okay.
The Hanamura set is pretty bare bones. It’s jussst enough detail to invoke the map. I can’t even nitpick it because there isn’t much there to do so. I would of loved to see the cherry blossoms and gazebo rendered in LEGO even though that section doesn’t appear in the short film, “Dragons” which I assume was what the designers wanted to incorporate the most since they decided to include a really random Yakuza guy minifig. But cherry blossoms is just the image I think of when I think of Hanamura because that’s exactly the loading image for the map every player has seen a million times.
Moving on from the map based sets, Reinhardt and D.Va were bundled together into one set. What they did to Reinhardt is pretty hilarious; I would LOVE to hear their reasoning for this decision. They made him into a minifig you insert into a giant suit but he’s actually supposed to be a big guy in big armor. D.Va, on the other hand, is a small girl piloting a big mech so she works really well here. Her minifig and Meka look awesome! She can’t turn her head because of her long hair though, but she might be the best produced Overwatch character in minifig form next to Winston. Meka is really nicely designed and easily posable.
Saving the best for last, I was looking forward to this Bastion set the most from the promo shots. Bastion in game might be a dick, but Bastion as a character is adorable. He was mass produced for war and violence during the Omnic Crisis against humanity (the pivotal event in Overwatch history and lore), but now he spends his days peacefully exploring the natural world with his good pal, Ganymede the Northern Cardinal. He communicates in series of beeps and doots which is cute as hell in game until he’s mowing you and your whole team down with his gatling gun over and over again because no one is switching to dive. Yay.
I think out of all the characters of Overwatch, Bastion, with all his blocky right angles, just naturally embodies the LEGO style the most. And this set delivers. Bastion looks good. He’s completely posable (two words: WIGGLY FINGERS!), his main eye even lights up, AND he can transform from his recon mode to his sentry mode with ease. Ganymede is a little freaky in blocks, but I think the designers did a really good job on this set as a whole.
Okay. I don’t know how to effectively end a review so I’ll just leave you all with some parting words.
– You might not want to build these between those long queue times for matches cause you might totally stick a sticker completely backwards and have a real bad time. I may or may not have built all of these sets doing just that.
– Look at how cute these weapons are! From reading through fan forums, it seems like a lot of people were disappointed LEGO didn’t make new molds for each hero’s weapons, but I think the guns are comically large and fun. From a personal aesthetic point of view, I really like the minimalistic look of them all.
– Buy these sets so there will be more sets in the future lol. I will be so heartbroken to only get 13 out of 29 of the hero roster. Please and thank you.
– But most of all, for the love that is most holy and most good, PLEASE consider filling another role if you are the third or fourth player choosing DPS. Don’t you want healing? Don’t you want to win?? And omfg, Get. On. Mic. Seriously. Please.
That is all.
Eva @greaterbeast

maker, accumulator, all consumer
View all posts by greaterbeast →