This is a review of the book Welcome To Marwencol.  The story, and the artwork, of Mark Hogancamp.  I recently had a chance to get my hands on the hardcover edition. These are my thoughts about the book.

Fair warning: Due to the realism of some of the scenes, some of which depicting the harshness of war, some of the photos in the book may not be appropriate for sensitive viewers.  The pictures in this review, however, are safe.

Mark Hogancamp is a US Navy veteran who was beaten within an inch of his life by 5 people outside a bar in Kingston NY in 2001.  When he woke up in hospital he had lost a lot of his memory, and had to relearn to read, write, walk, and even rediscover his own personality.

As a way of coping with his new handicap he built a 1:6 scale town in his back yard. Set in WW2 Belgium, he called the town Marwencol.  He populated the town with characters from his new reality, and of his own imagination.  The characters came from toy lines like Barbie Dolls, G.I. Joes, and whatever similar figures he could get his hands on. 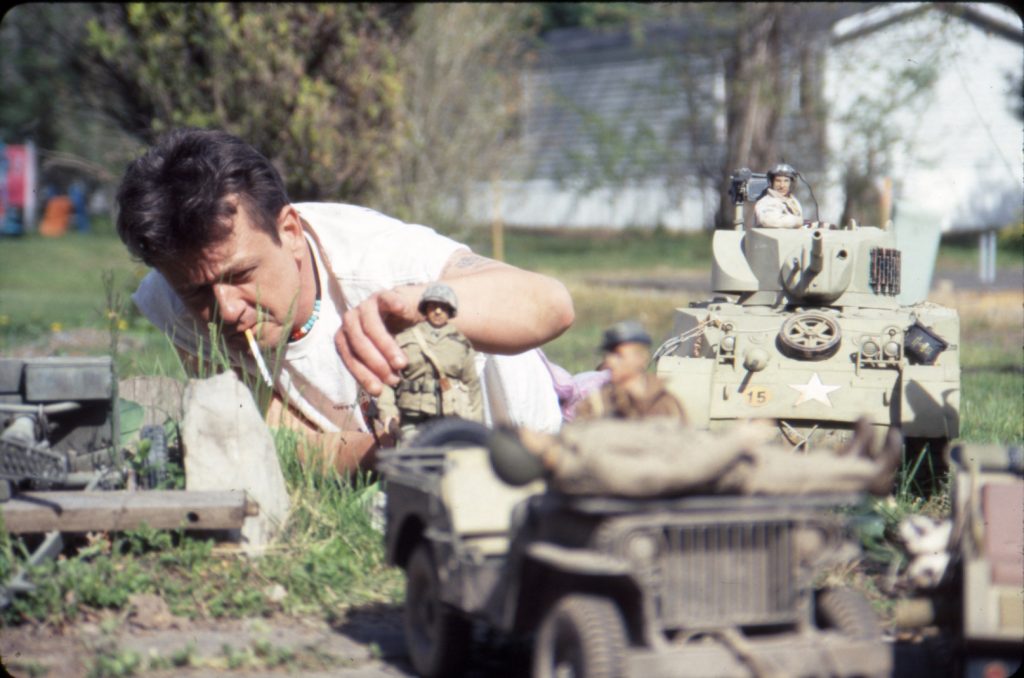 Along the way he started taking photos of Marwencol, in a style that any toy photographer will recognize and appreciate.  These photos caught the attention of the art world, spawning a documentary called “Marwencol“, a soon-to-be-released movie called “Welcome to Marwen“, and this book.

Physically the book is gorgeous. The pages, including the hard cover, are nice heavy paper, and well bound.  It is full of high quality imagery. You could cut any one of them out, mount them on your wall, and pass it off as coming from a photo gallery.

At 278 pages, the book is a quick read, largely due to the large number of photos. As a result, It took me about 45 minutes to consume the book cover-to-cover.  However due to all those photos, the book makes as good of a coffee table book as it does a biography of Hogancamp.

The book is split into three main sections.  The first section covers Mark Hogancamps history, the attack, his recovery, and how he got into building the town of Marwencol.

The second section covers Marwencol itself.  It provides a detailed description of the town, including the buildings, the inhabitants, and the stories behind them.  It feels like it is a real place that you can visit.

The third section is a comic style story of some of the events that happened in the town.  It is a bit fanciful, and at times juvenile, but it is interesting to see the mind of Hogancamp at work as he creates the stories behind his art.

The thing I found most interesting about reading this book is getting an idea of how Hogancamp thinks about Marwencol.  Everything in the town comes from a story in his head, and his goal is to capture those stories in his camera.  He is trying to bring his world to life, and does it with almost reckless abandon and incredible detail.

Marwencol is clearly therapy for Hogancamp.  There are many clues in the book that this is the case.  The main character in down is based on him, and is called Hogie.  Several characters based on people he met post-attack are also featured heavily.

However the most striking clue is the towns bad guys. Outside Marwencol live 5 Nazi SS soldiers, who terrorize the town.  He was attacked by 5 men outside a bar in his home town.  To me it is clear he is trying to deal with those that harmed him, and exorcising those demons thru the stories told in the town.

The photography is all beautiful.  Some of the work is clearly posed toys, but some of it is stunningly realistic.  This image is often mistaken as an historical image from World War II: 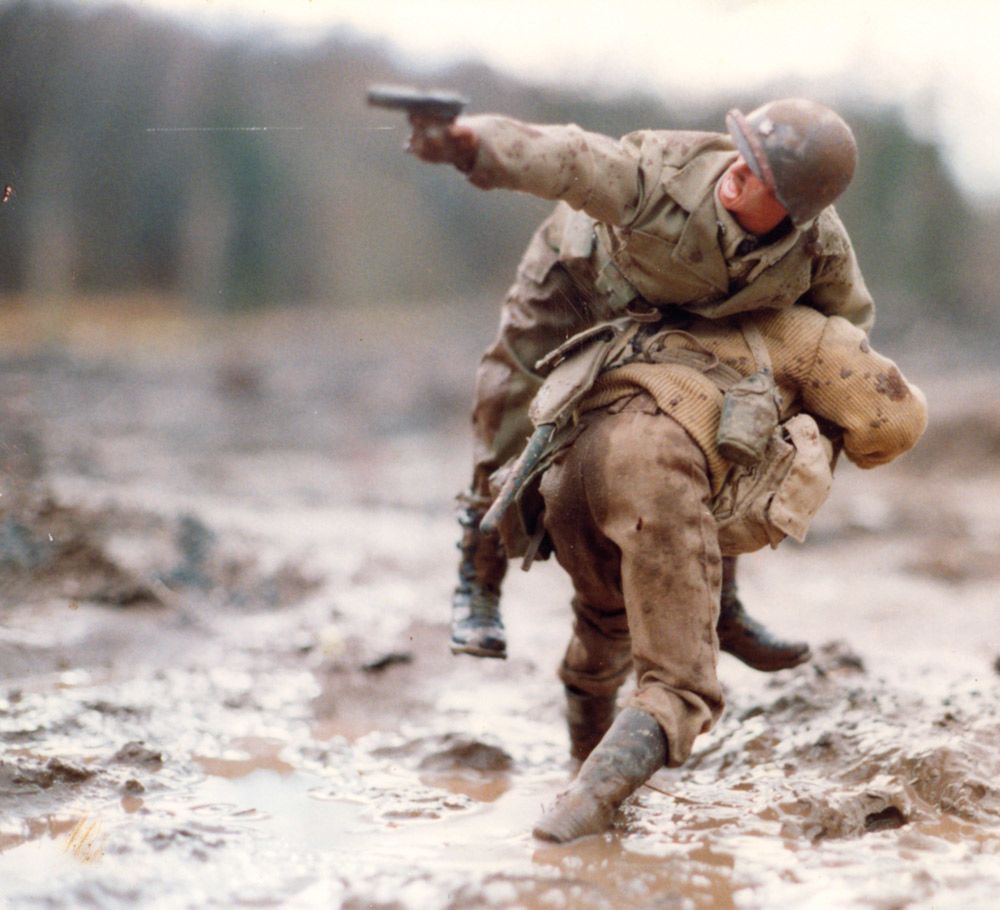 To my trained toy photographer eye it is easy to see it is a toy, but I have had to personally correct at least one person who thought the image was an historical photo.  So I completely believe others make the same mistake.

Finally, it is not common for toy photographers to use Barbie dolls and other similar looking figures. As a result, Hogancamps images have a unique and in some ways refreshing, look.  These are not your typical Instagram photos.

This book is a quick, interesting read, and a great look into the mind of a troubled but talented artist.  I think this book should be on any toy photographers book shelf.  However if you don’t want to pick up the book, you are in luck, as the movie based on Hogancamps life is being released in a few weeks, on December 21st.  I really enjoyed the book, and I can’t wait to see the movie.

note:  All images for this post are copyright of the original photographers. All rights reserved.