At the end of July I participated in first person at my first photographic exhibition, during ItLUG Lecco 2018 organized by Marco Chiappa in collaboration with ItLUG

If you do not have time to read everything, I’ll give you a summary:

one of the most engaging experiences I’ve done.

If you want to know why, I’m afraid you’ll have to read.

Obviously the first thing to think about is which photos to take and my critical side had selected very few.
Fortunately I was guided by the opinions of my family to get a list of 24 photographs. 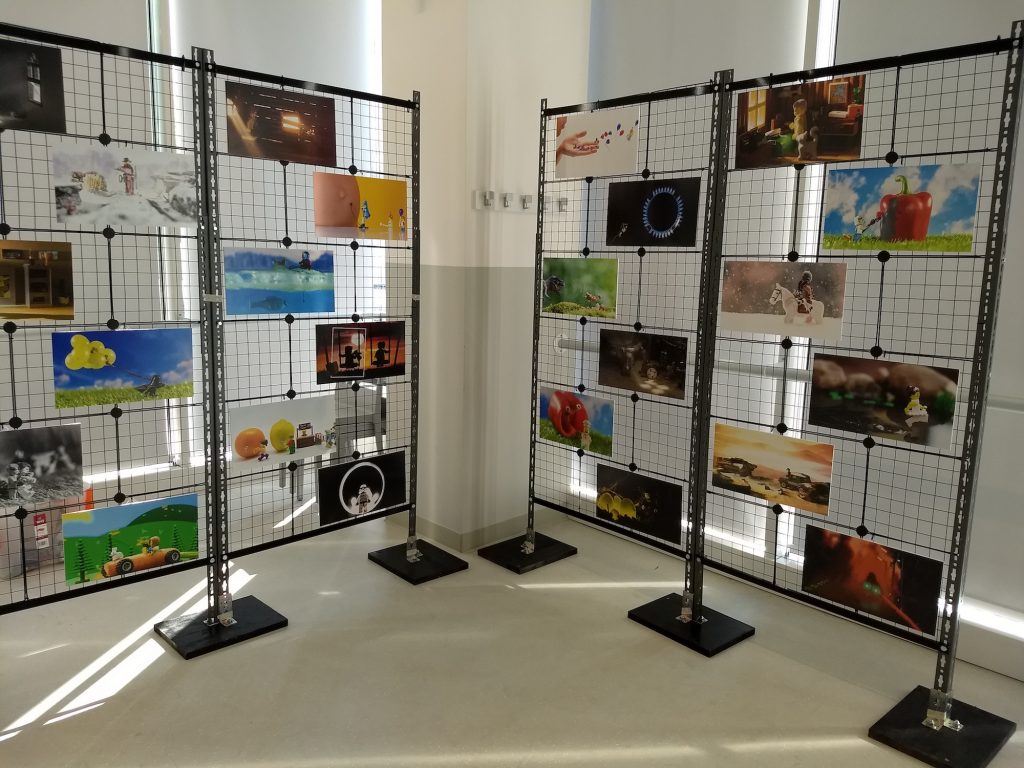 In addition to photographic exposure, I wanted to bring something to engage the visitors, so it occurred to me that I could bring small photo setups to show people how easy it is to enter the world of legography.

I wanted to do two setups in contrast: in one there would have been a beautiful green lawn and in the other an arid desert.
I chose a synthetic grass tile, with a background representing the blue sky, a simple setup that could apply to any type of minifigure.

The second was a saucer that I filled with fine sand and pebbles and a rocky desert in the background, which could be used with star wars, cowboys, aliens and anything that could come to mind to children. 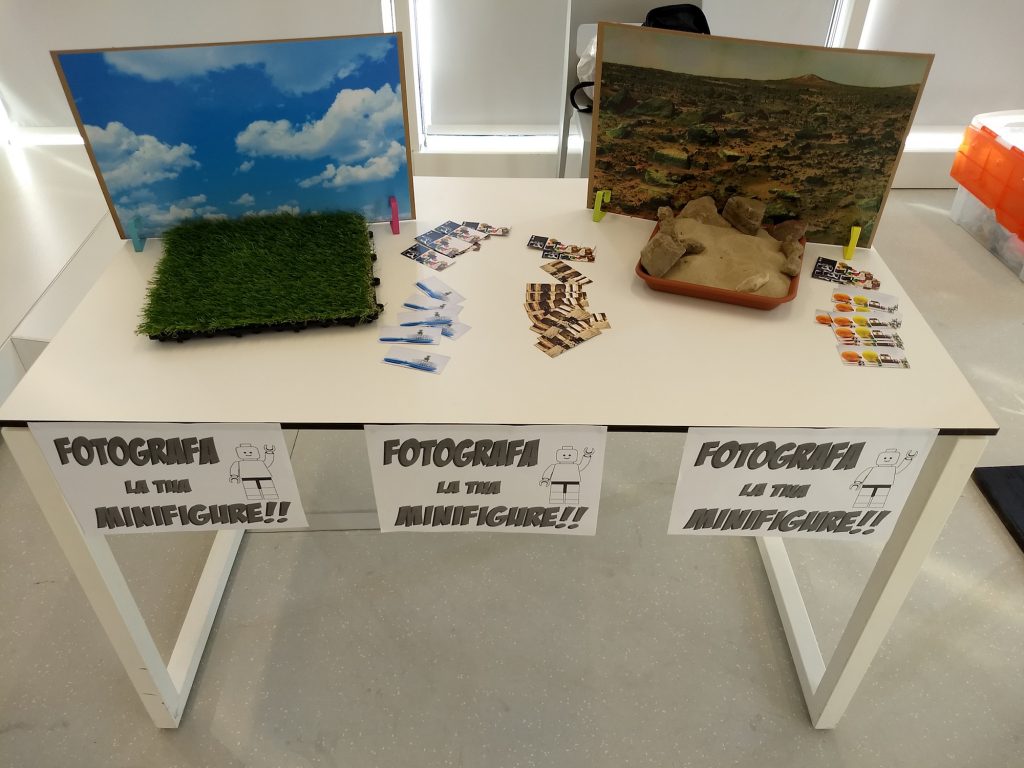 Once finished, I put some sample minifigures, to allow people to take pictures even if they did not have their favorite minifigures with them. 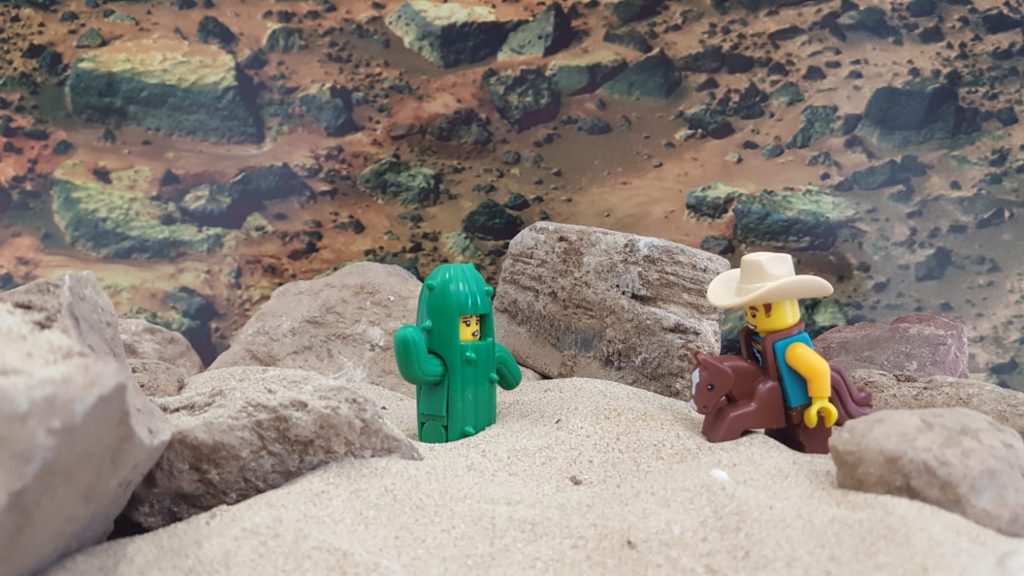 The installation took just over an hour, after which I was ready and excited for the two days that awaited me. 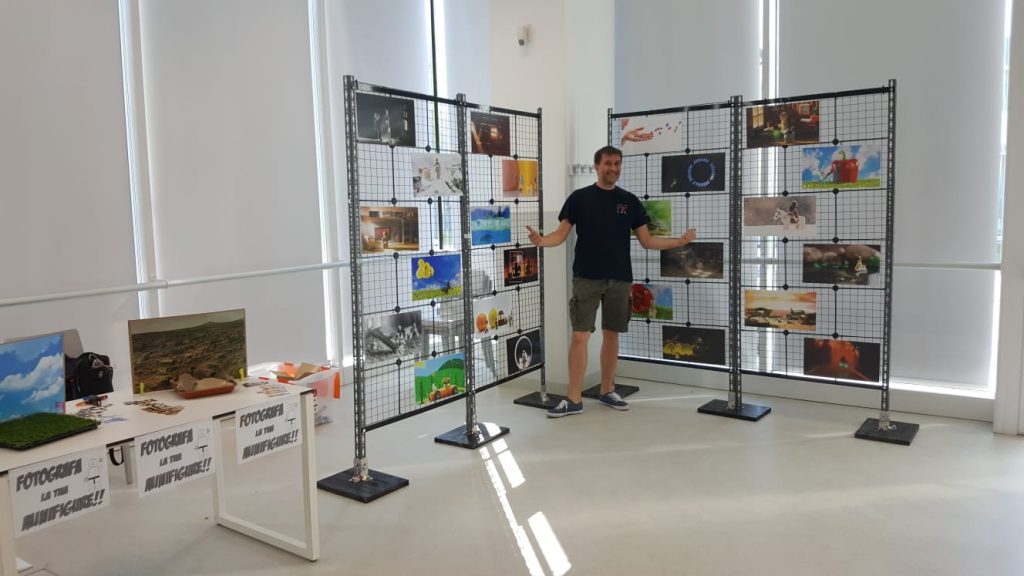 This poor fools doesn’t even know what to expect

At the opening I was nervous, watching suspiciously the first people coming, trying to enter their mind as they roamed the hall, luring them with my psychic powers.

It was a failure from which I learned I had no psychic power. 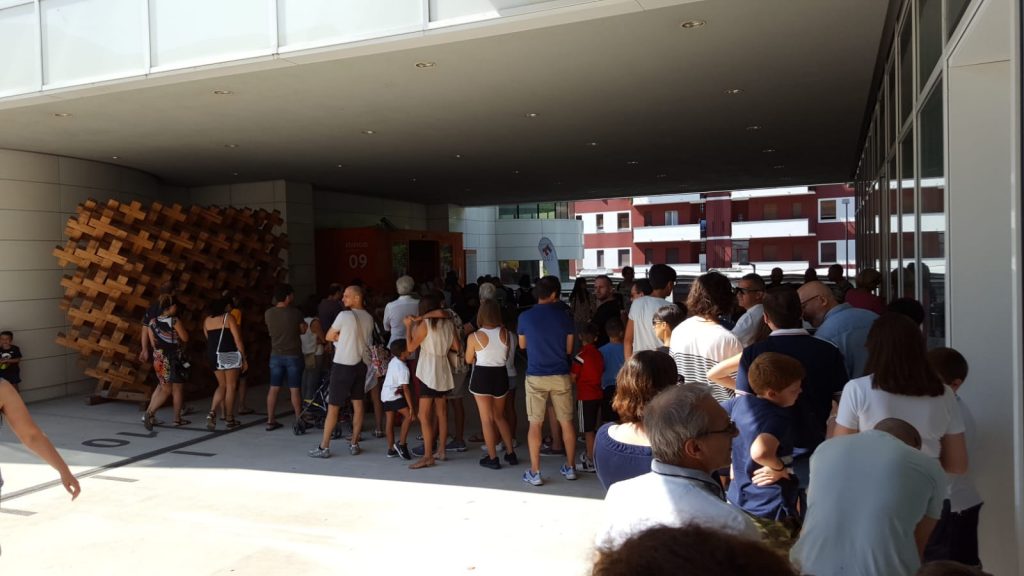 The queue of critics of my photographs

The more visitors came, the more my nervousness left room for curiosity and the desire to share how I managed to get the shots.
For this purpose I had some backstage photos printed to show how easy it was sometimes to get decent results.
Their expressions were priceless when I unveiled the setups. They all left with a smile, leaving me with some nice compliment, always good to receive. 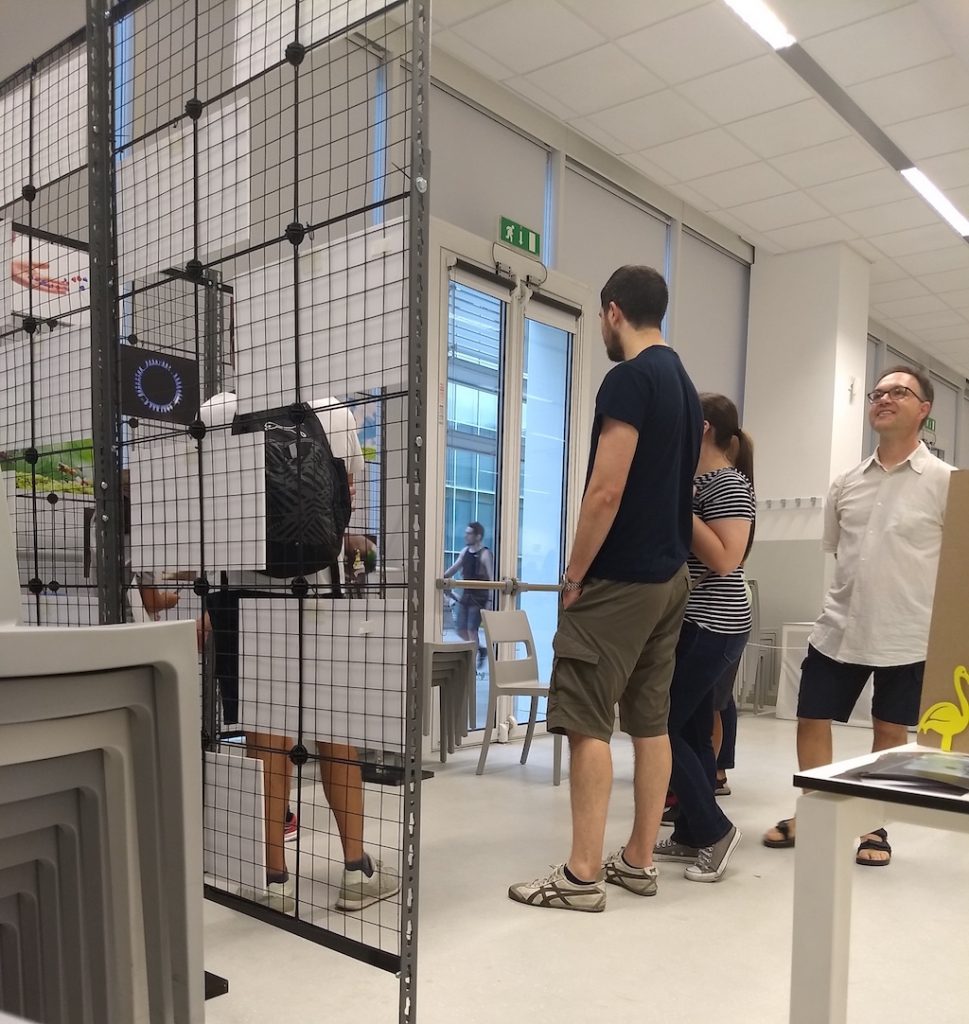 Other satisfactions came from the people who passed in front of the panels looking with indifference, only to be hooked up after a few steps.

But the best were the children. The expression of amusement and amazement were truly exceptional.

One of the funniest conversations I’ve had, was with a child about the darth vader photo: 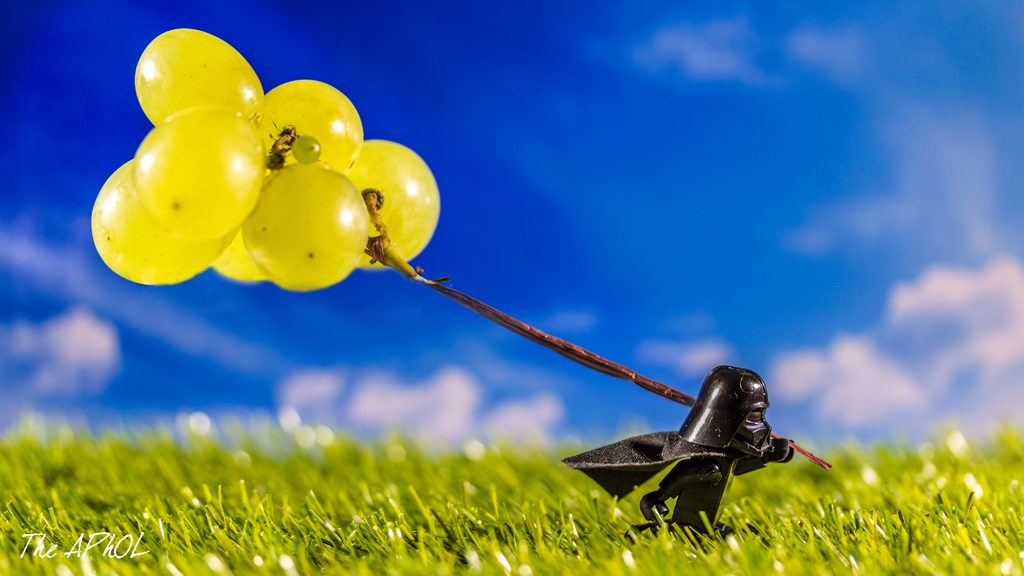 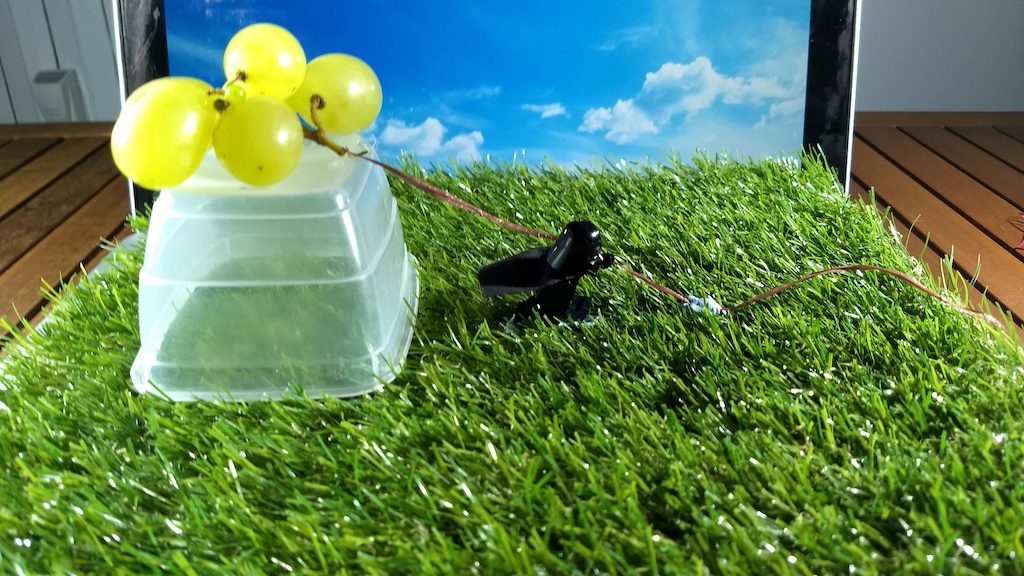 Kid: “How did you make the grapes fly?”
Me:”I took a picture of the balloons leaning against a box and one without balloons. Then I put the photos in the computer and I deleted the box, so it seems that they really fly”
Kid: perplexed expression
Me: “Aren’t you convinced?”
Kid: “No. Is this really fake?”
Me:”Just joking! I inflated them one by one!”
Kid: satisfied expression

The setups has attracted so many children and many adults, intrigued by something so out of the box. 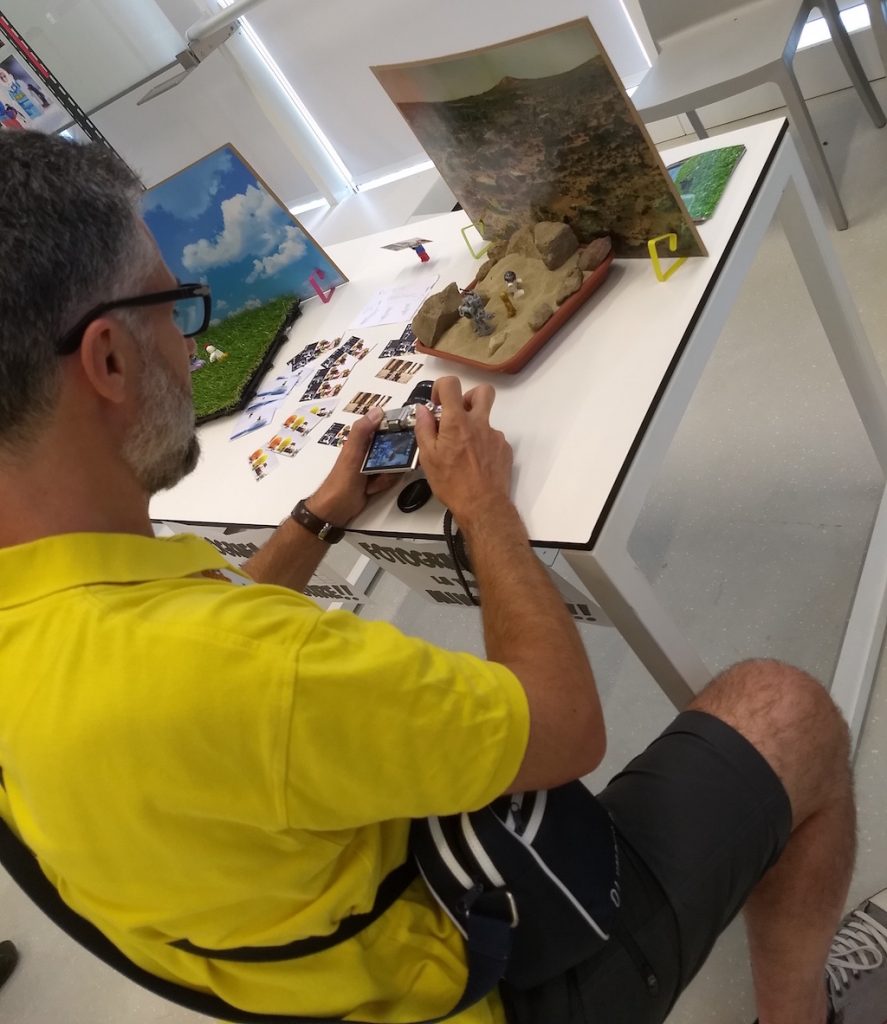 Here you can see a typical child, Luigi (@priovit70) using the setups

Needless to say that the main attraction was the sand, for the children it was enough to dip their fingers in order to leave with a smile. 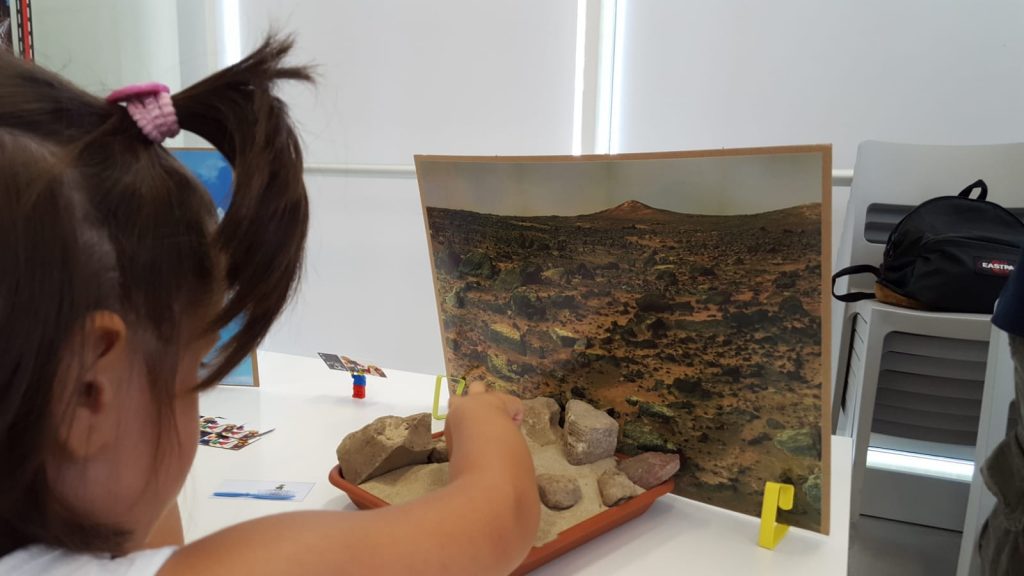 My daughter is a professional tester

This experience has taught me that there are still people willing to be surprised, that seeing the amazement and fun on the faces of children repays the efforts extensively, that LEGO bricks are, and must remain, an instrument through which to express creativity in different forms.

But above all taught me that it’s nice to share your photos online, but to exchange opinions live is definitely better!

Have you ever done a photo exhibition? What feelings did you have? What did you learn? I’m curious!!!