Somewhere near the end of my time in The Arcanum, I was given the following challenge, which was basically: watch a Hollywood blockbuster style movie, then create an image in the style of that movie.
Movie makers are masters at telling stories.  If you recall from a previous post, I am a firm believer than an image should tell a story. It doesn’t have to be a complicated tale, but it should have a message to convey.  Movies are a great way to learn about story telling.

This is doubly true for us toy photographers, as often our subject matter is taken from comic books and movies, in my case the Star Wars saga, but I’ve also taken cues from Marvel and DC Comic movies, as well as Lord Of The Rings. Indeed a lot of toys, and our resulting images, come from Hollywood blockbusters.

An example from a Hollywood blockbuster

When I was presented with the idea of using cinema as a place where I can study how to tell stories in still photographs, I was immediately reminded of information I learned 10 years previously about the  The Matrix.

If you haven’t seen it, the basic premise is that machines have taken over the world, and have enslaved humans by plugging their minds into a virtual world called The Matrix, which accurately simulates the world as it existed just before the rise of the machines.  Some humans have escaped The Matrix mind-prison and are trying to free the rest of humanity. So the movie happens in two worlds, a computer controlled fantasy, and actual reality.

The movie uses some clever techniques to visually separate these worlds.  The simulated world is cast in green hues and has no blue tones.  This indicates the computer-y nature of the world, and gives a sick feeling to it.  The reality is shot with blue hues to indicate hope, and life. Indeed the only green seen in reality is on the computer screens that are showing the Matrix code.

Also reality is shot with long lenses to separate the humans from the background, whereas the simulated world uses short lenses so the characters are more connected to their surroundings.

It is all very clever stuff, and discussed in more detail here.

Movie makers use all sorts of techniques that we can use in our still imagery.  The use of light can tell a lot about mood. Bright saturated lights can be energetic, and fun.  Muted light can give that dystopian feel. A tight crop on an actors face can indicate that what is happening to that character is important and specific to that character.  Conversely a wider crop can indicate the scene as a whole is more important.

Movies have other things that can’t easily be duplicated in a photograph.  They use time, and motion, which can be implied in a still image with some special effects.  However they also use sound, which cannot be simulated at all in a photograph.

So this brings me to the challenge I was given as an apprentice in The Arcanum. Watch a movie with the sound off, and study how ideas and action are portrayed on the screen.  Turning the sound off for this exercise is important, as it forces the viewer to concentrate on just the visual aspects of the film. Any good film uses sound to flush out the story (dialog, musical cues, special effect sounds etc.). Sounds are impossible to duplicate in a photograph, so we want to concentrate on just the visual.

The movie should have high production value.  Science fiction movies are good choices as they tend to use a lot of special effects.  Movies that mostly use dialog to move the story along are not as useful for this exercise, for obvious reasons.

How I met the Hollywood challenge:

The movie I selected, was Fantastic Beasts and Where To Find Them. The movie was selected for me, truth be told.  I was in an airplane flying across America, a 5 hour flight. After takeoff, as I was getting settled in with watching a movie on my phone, I noticed that the overhead video screens on the plane started showing a movie. I didn’t catch the title so I wasn’t sure what I was watching.

However it was a movie that fit the challenge, so I decided to give it a shot.

Better still, there was no sound unless I asked the stewardess for some headphones. Being a tired introverted traveller talking to another human wasn’t high on my list of priorities.  So I sat back and watched in silence. While I watched it, I studied it critically.

I even took notes – shocking, I realize.

When I landed I created my own image, and processed it to use the same colour and light techniques I saw in the movie.  The shot is a composite of an actual Stonehenge replica I discovered in my recent travels, and a Gandalf minifig I shot in my studio.  This is the result: 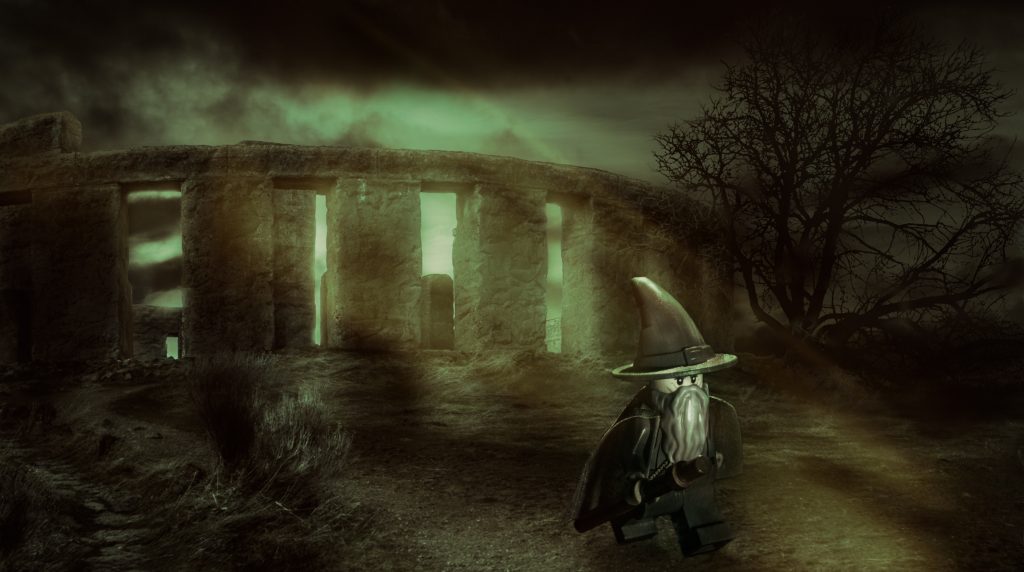 Now when I watch movies, even with the sound on, I get inspired to create scenes from that movie.  Pro tip: pause the movie and take a photo of a screen to save the idea for later.

Pick a Hollywood blockbuster you have not seen before, with high production value, and watch it.    While you are watching it, study how the movie makes use of light and shadow, and colour palettes, and composition of the scene.  Watch the movie with the sound off!

As you are watching the movie, try to answer the following questions. Because movies are lengthy, it may be useful to just consider a few scenes from the movie to keep things simple.

Once you watch the movie, head off and create your own image, or series of images, using some of the insights you gained.

Don’t just try to recreate a scene from the movie, but rather create a wholly unique scene that uses the ideas from the movies use of colour, light, and composition.