When Shelly asked me to write a guest blog post a few feelings went through me, humbled, honored, excited and with that also come the dreaded A bomb – Anxiety! Something I’ve suffered from and had under control for almost 20 years, until 7 years ago I injured my back jumping my mountain bike which meant no more jumping bikes or riding dirt bikes. 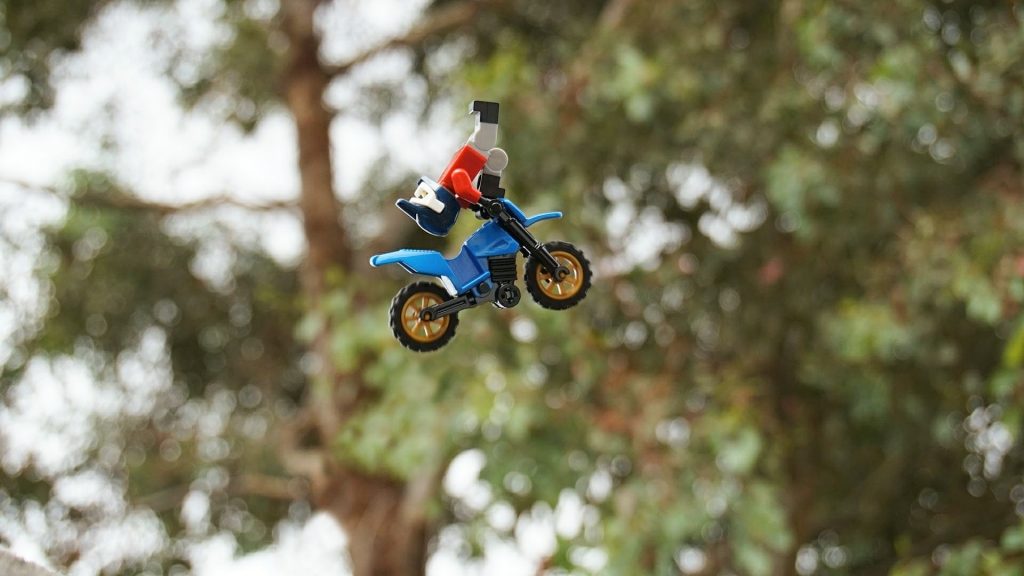 I’m not a photographer, just a dude with a sore back who can‘t be silly on his bikes anymore so I passed the torch on to Stu and Lou. The two Lego characters that get up to all the shenanigans I can‘t get up to on my bikes anymore. Stu and Lou both a little older than me are my two close friends I grew up with, who influenced me the most growing up, especially with riding, so it was appropriate to name my minifigs after them. 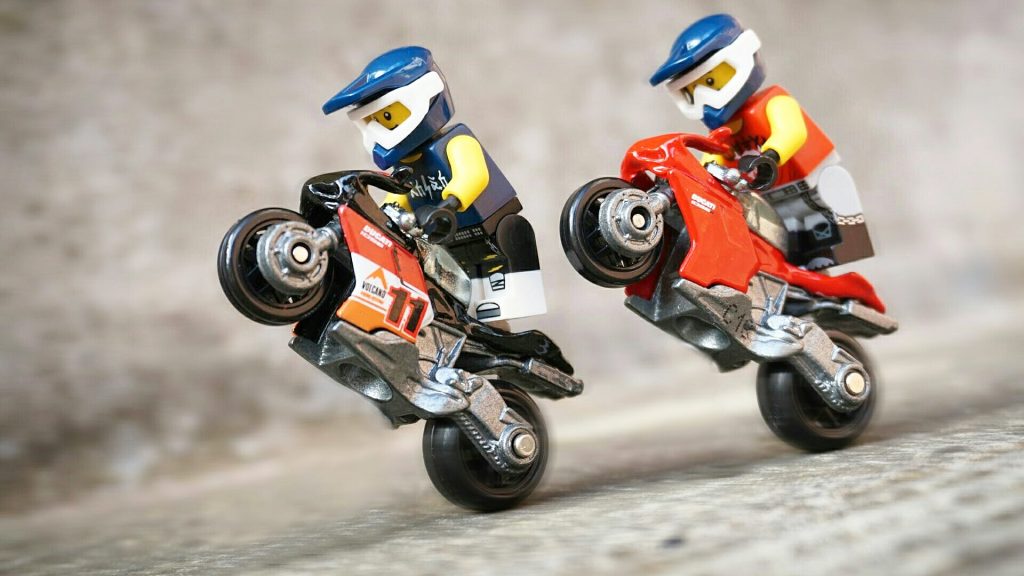 There have been two constants in my life that I’ll always be passionate about, Bikes and Toys and I’LL NEVER GROW OUT OF THEM. I love toys as much as I love bikes! Most of the time though, money for bike parts took precedent over toys, so in my twenties it was more about bikes! 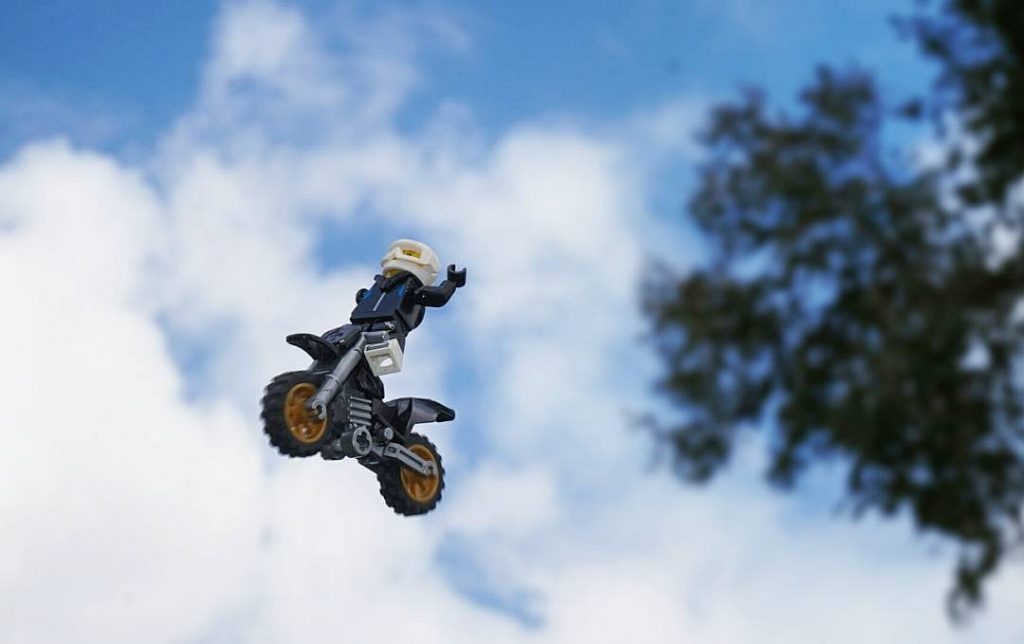 As a kid I grew up with Space Lego and Transformers and transformer I never stopped loving. I used to find it hard to fit enough pictures of transformer and BMX on the covers of my school books as it was all I thought about. When I wasn’t out practicing on my BMX I’d be at home playing with my transformers, if I wasn’t drawing them. 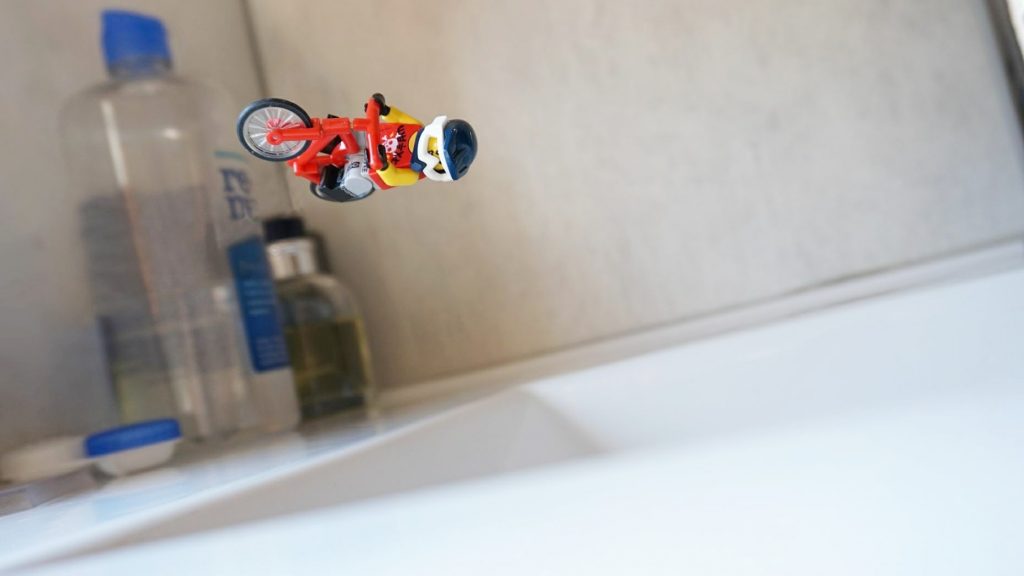 Since I got injured I’ve had to turn to other hobbies I enjoy as I was getting pretty depressed not being able to ride, especially not jumping. At one point I couldn’t even swing my leg over my motorbike to get to work let alone go out and jump my mountain bike off a huge drop. 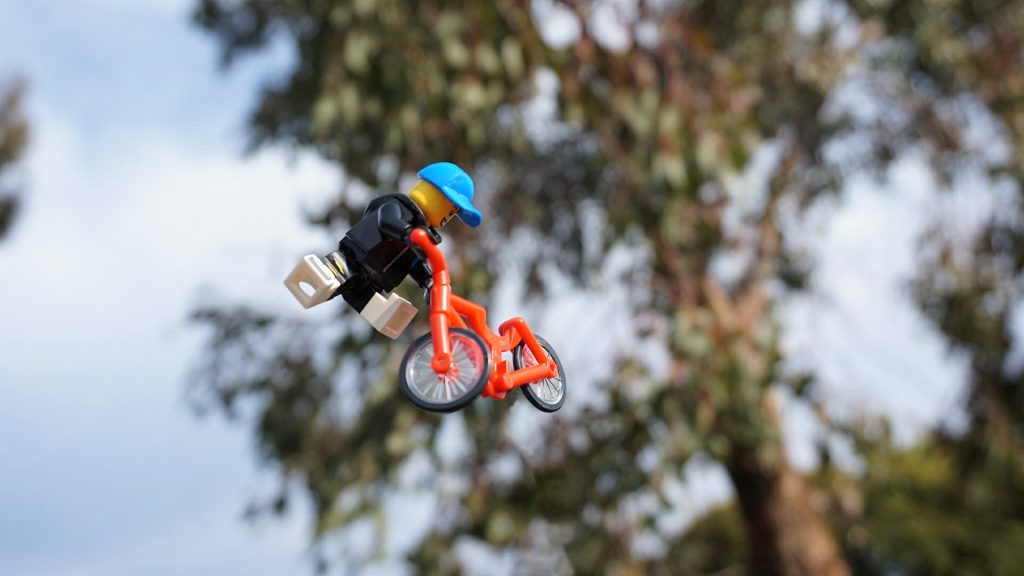 So, I got stuck into my toys. Japanese Anime Action figures and figurines, Lego and my RC Trucks but it’s not till I started editing pics for fun in photoshop that I got interested in toy photography. Unfortunately, my laptop could only handle so many layers in Photoshop that it would shut down half way through an edit. That’s when i discovered mobile editing apps and that Lego is so fun to take photos off, about 3 years ago the time I got onto Instagram. 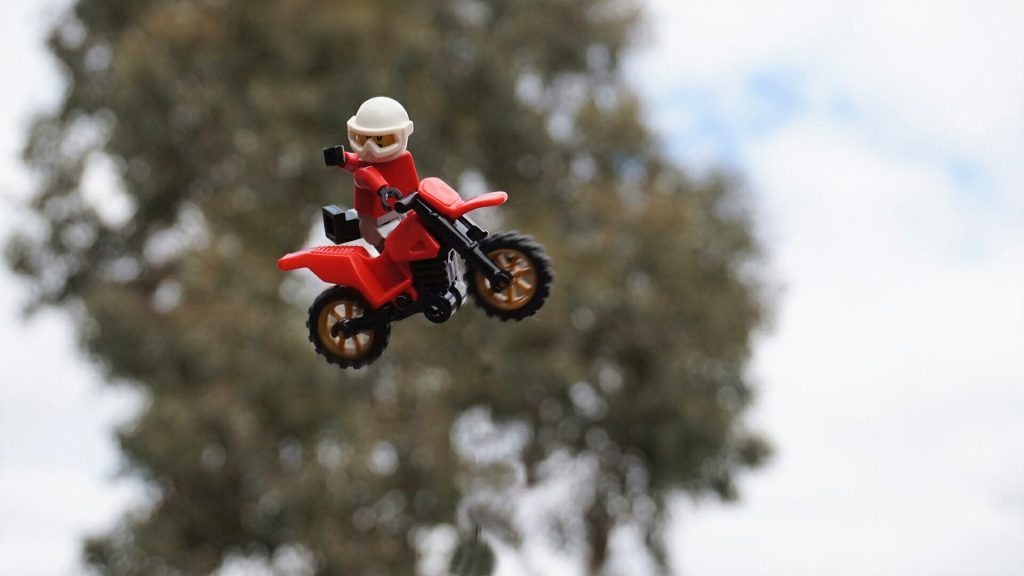 Was like a light went off in my head when I noticed the Lego City Police Chase set in Target, which came with two Dirt Bikes. If I can‘t do stunts on bikes anymore I’ll do them using Lego. Those little plastic dudes are great relaxation and I get to live my old crazy stunt life vicariously through my Lego buddies. I stopped collecting anime figurines and action figure and started getting into my Lego. I’m not a huge Lego collector, I’m particular as to what I purchase, I’m more like, what will that kit look like amongst everything else, over building a Lego city. 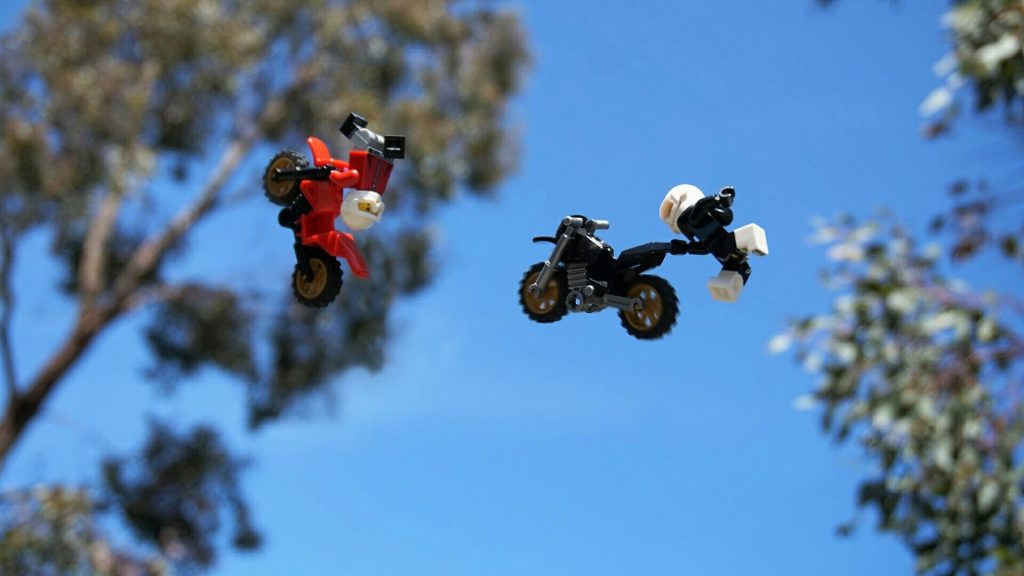 Sometimes a bike jump set up can take me as little as 10 minutes to set up and shoot. Other more complicated tricks may take a little longer as I have to pull apart or modify the minifig till I’m happy it looks like they are actually doing the trick/stunt I intended to set up. All tricks performed on my Instagram are actual real tricks performed by real athletes in the real world! 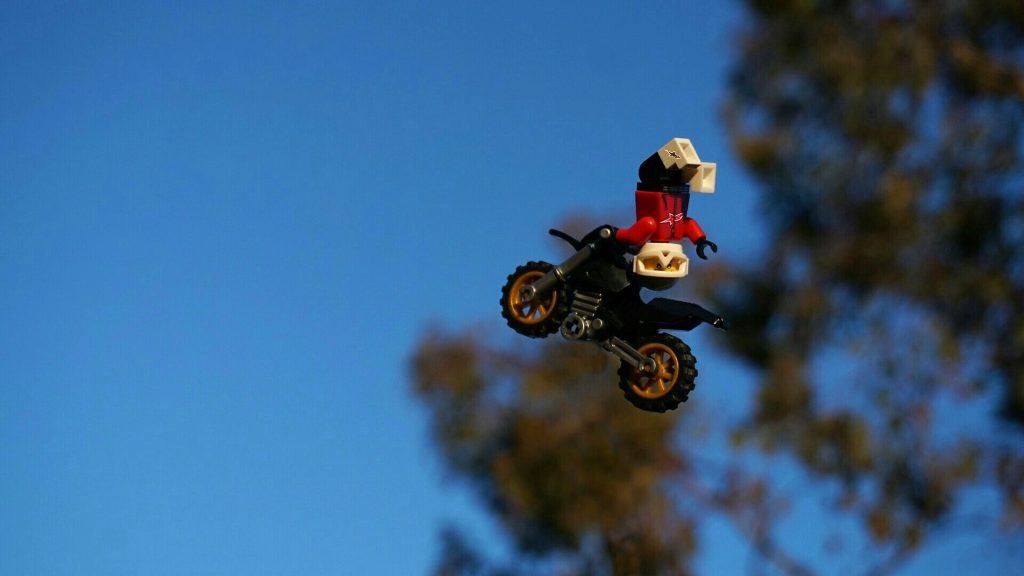 My friends in the field are good old blu-tak and double–sided tape to hold the minifigs limbs in the appropriate places and some wire to keep the bike suspended in the air so I can get my shot, while my most used editing too is the clone tool to make the stands disappear. 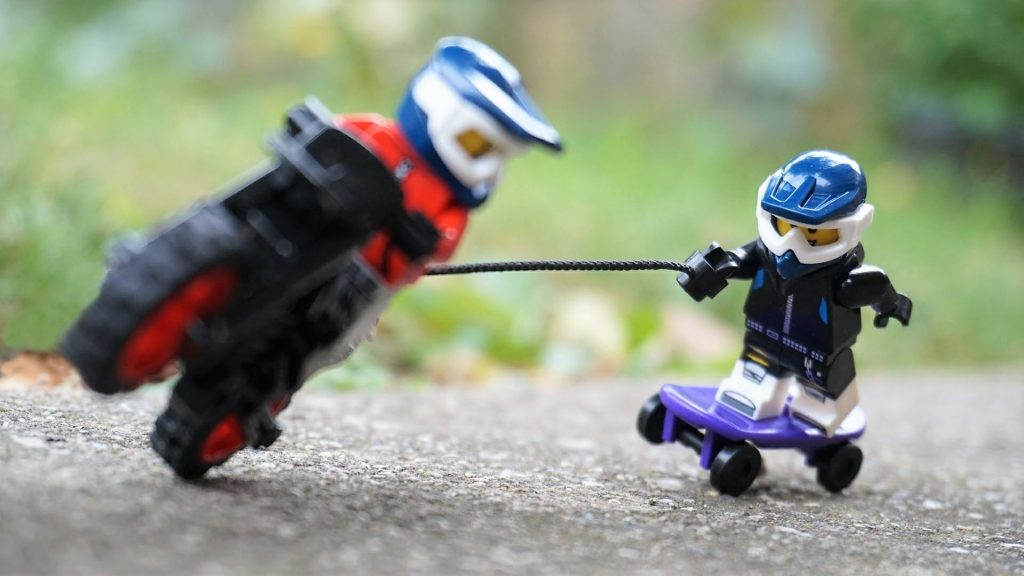 I take most my photos on my Sony a5000 and beam them to my Sony z5. Ill then edit out stuff like stand wire with Adobe Photoshop fix app. I use Picsart app to show motion in my pictures or to add dirt or water effect to a Lego picture but to be honest it compresses my files down so much it really discourages me to take photos to edit lately. I go from a prefect looking raw file edit to a photo that looks like it‘s been printed out of a toaster. I try not let that get to me and say to myself…”balling on a budget” but lately it has really slowed me down but if it wasn’t for the encouragement from the toy community especially Lego photographer‘s I’d probably have given it a break already but it‘s also really hard for me to stop doing what I enjoy. 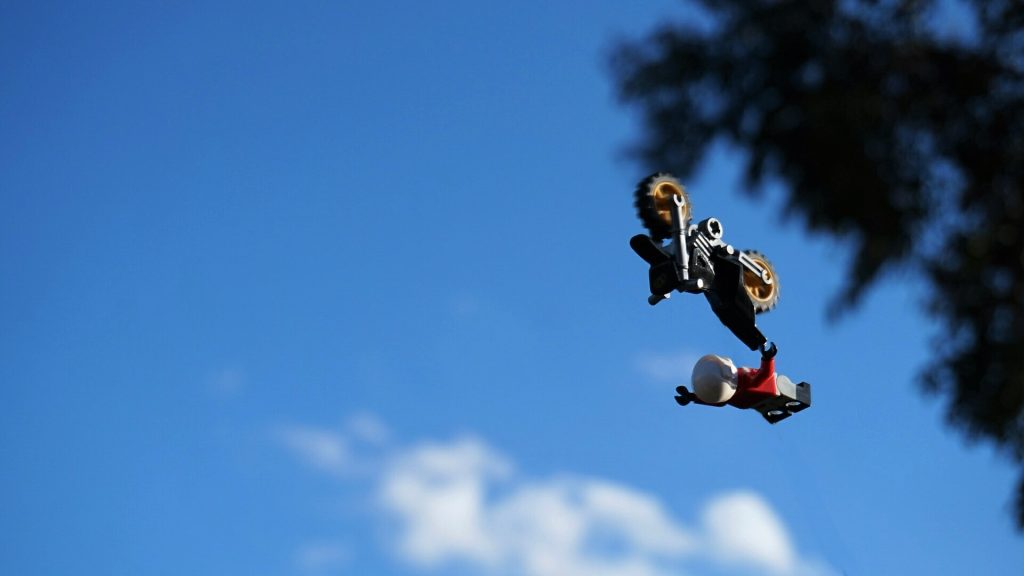 When I feel a little flat from toy photos I go out and take photos of other things, buildings, trees, art, motorbikes and that’s helped me understand my camera a little more too because Seriously… F.Stop is a measurement? I come from a work shop, we use the metric system, sometimes imperial but when it comes to camera measurement I tell you, it drove me a little crazy at the start, I had to put a little sticker under my camera which had two icons on it, one of an eye and one of a rabbit and on either side of them, arrows. Its the only way I could remember the difference between shutter speed and lens opening. See I’m still shocking at camera lingo but give me your broken bike and i’ll fix it with an elastic band. 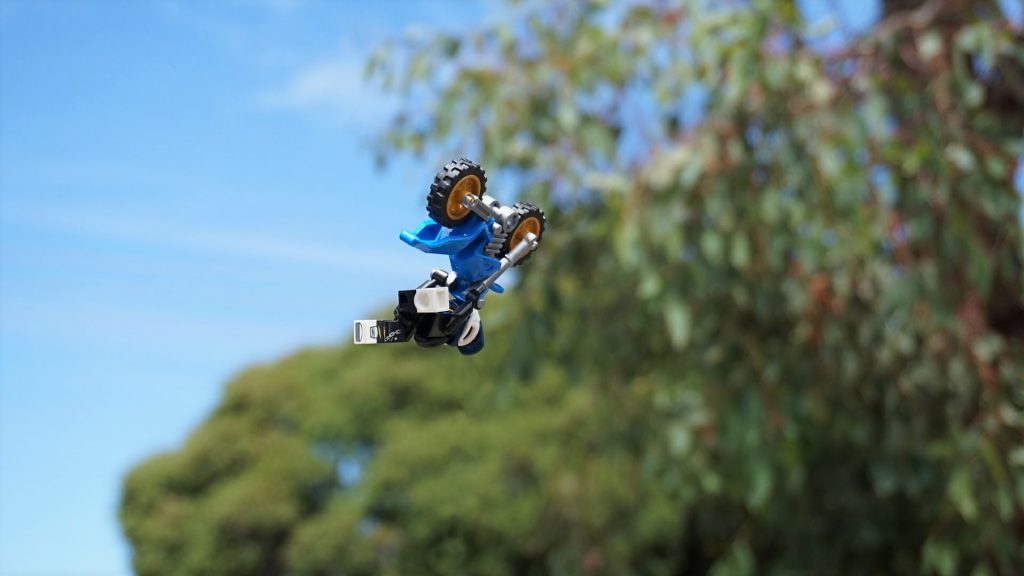 You don’t need the best camera and best pc with Photoshop on it. Just get your phone if you don’t have a camera and go have some fun and don’t let editing apps scare you, they can be heaps of fun! 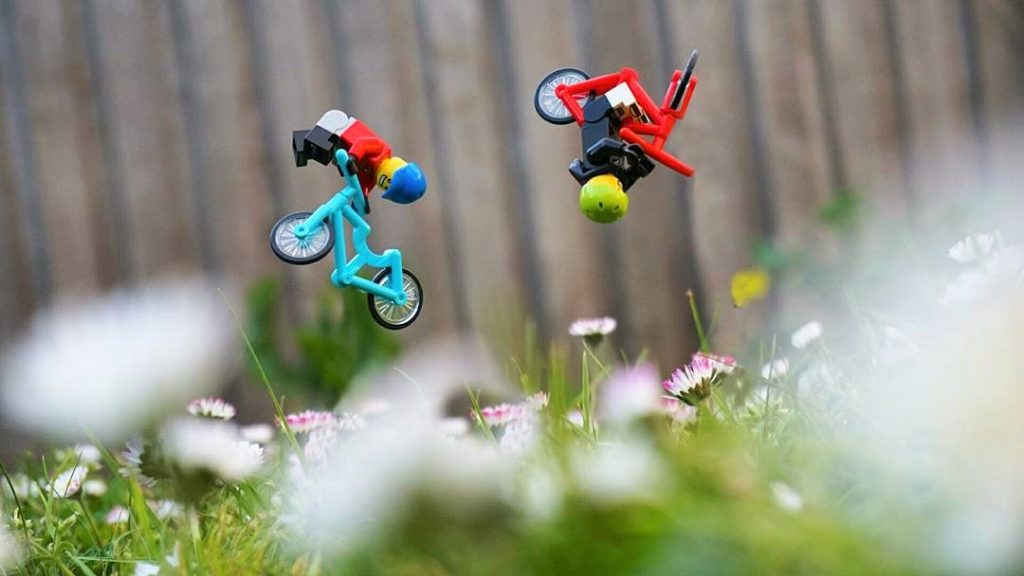 If you made it this far, you‘re a champion and I thank you for reading, if you dare to see more I invite you to join me on my Instagram feed @chaosrr6 .
Thanks Shelly for the opportunity to contribute to this wonderful page filled with so many fun talented people, yes, I do frequent it  🙂  maybe its time I joined the g community but for now I bid you all a great day or evening…Stay gold homies. 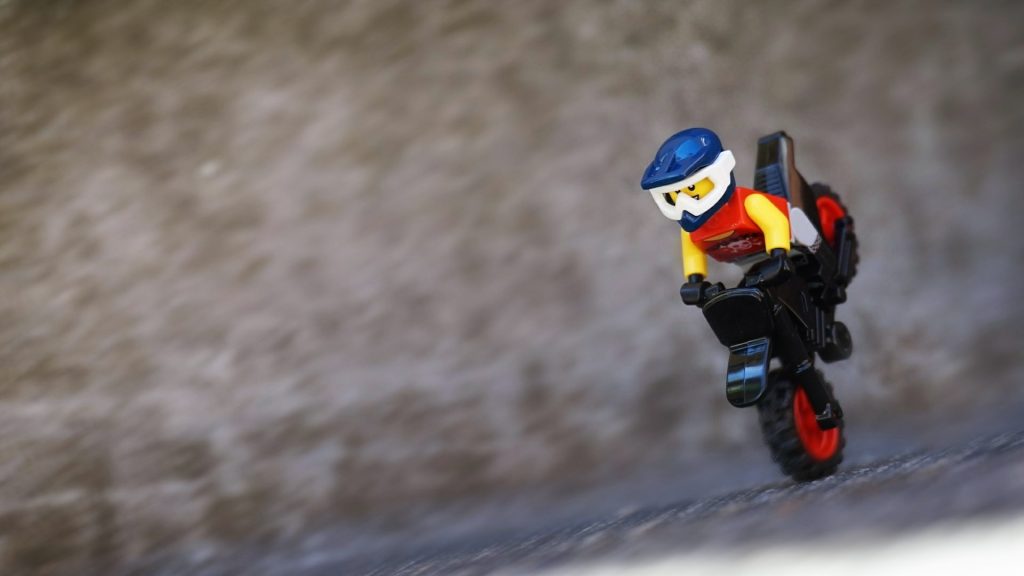 About the Author: Perry S