The fine folks at LEGO have sent me not one, but two of the new modular building, 10260 Downtown Diner! One I’ll be reviewing, and the other could be yours!

I am a huge fan of the LEGO modular buildings, but admit that I was a bit skeptical about the Downtown Diner when it was first announced. The 1950s aesthetic was cool, but I worried that the bold pinks and teal colors would clash next to past sets like the Palace Cinema, Assembly Square or Parisian Restaurant. I also wondered about how much photographic variety I’d be able to get out of such a specifically themed structure.

I’m happy to say that I could not have been more wrong about this modular building! In fact, it’s quickly ascended the list to become one of my absolute favorites in this Creator Expert line. Like past modulars, it’s incredibly fun to build, and is jam-packed with clever details. Set designer Mike Psiaki really outdid himself, using pieces in ways I hadn’t even imagined to create things as simple as the tan brick-lick siding of the upper floors, the big pink “Diner” signage out front, or the windows that adorn all three stories of the the right side of the diner. 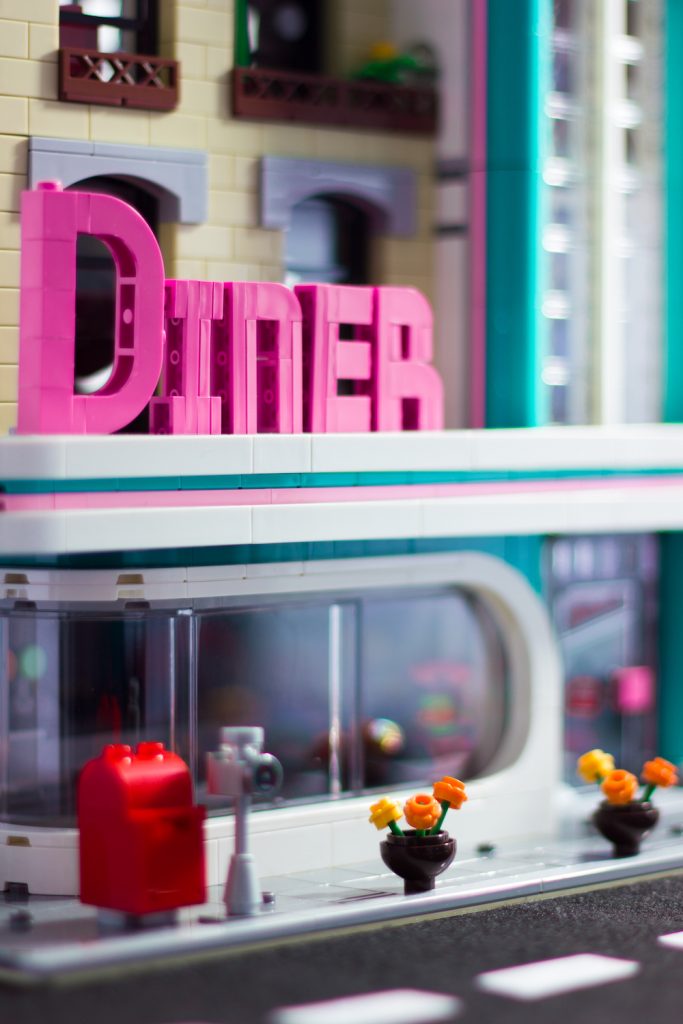 One of my favorite details is a spiral staircase on the back, connecting the second and third floors. It’s constructed with black fence pieces and Battle Droid arms, and it looks fantastic. 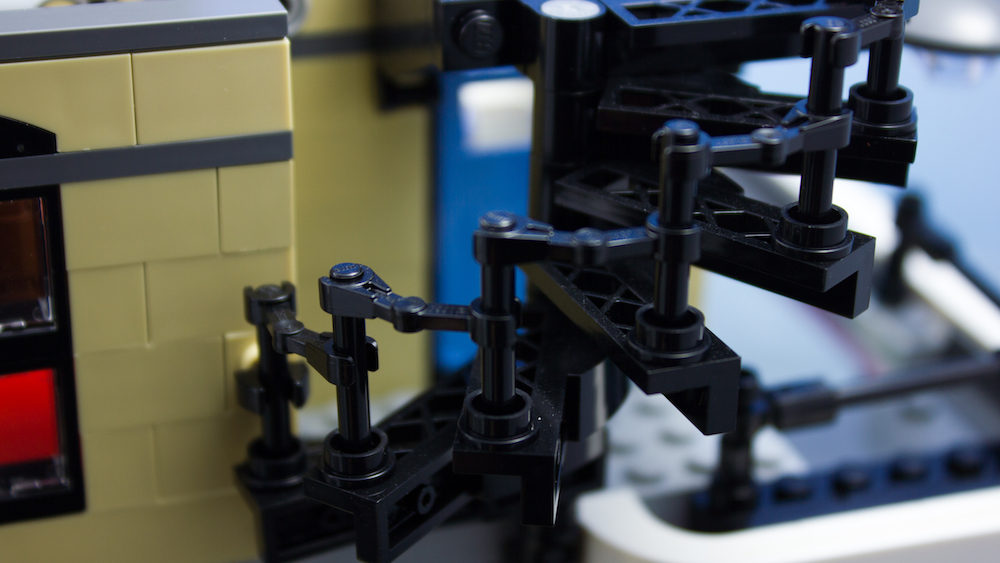 I could go on, but I don’t want to spoil all of the wonderful little details in this review, and I really want to focus on how the Downtown Diner holds up for photographers. We’ll start on the ground floor, and work our way up the building.

The main attraction is, of course, the diner itself, and it does not disappoint. It’s everything you’d expect a 50’s diner to be, from the red booths and tile floors to the jukebox and short order cook! 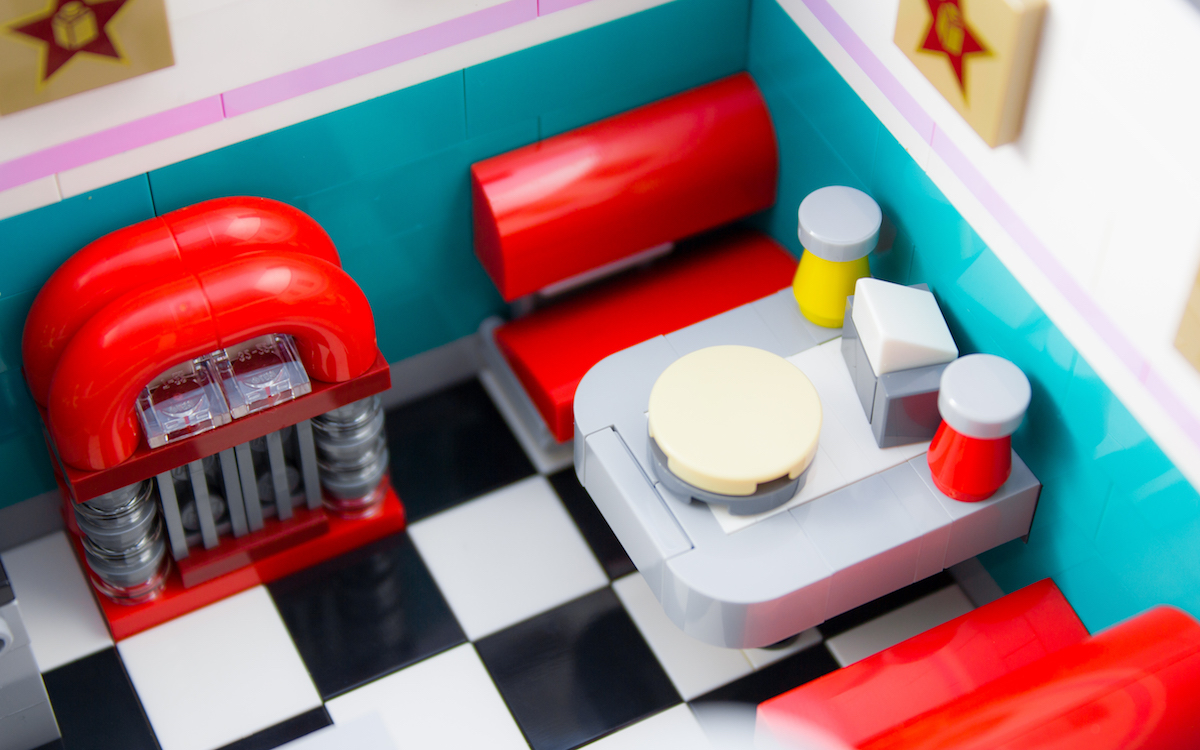 The colors in the diner really pop, as the teal and pink are so perfectly complimented by the red. This makes the entirety of the diner extremely photogenic. I couldn’t help but fill the frame with colors and bump up my exposure to get that bright, vibrant look. The checkered tiles are wonderfully reflective, and the diner is chock full of authentic details, like the ketchup & mustard bottles on the table, on either side of a cute metal napkin dispenser. 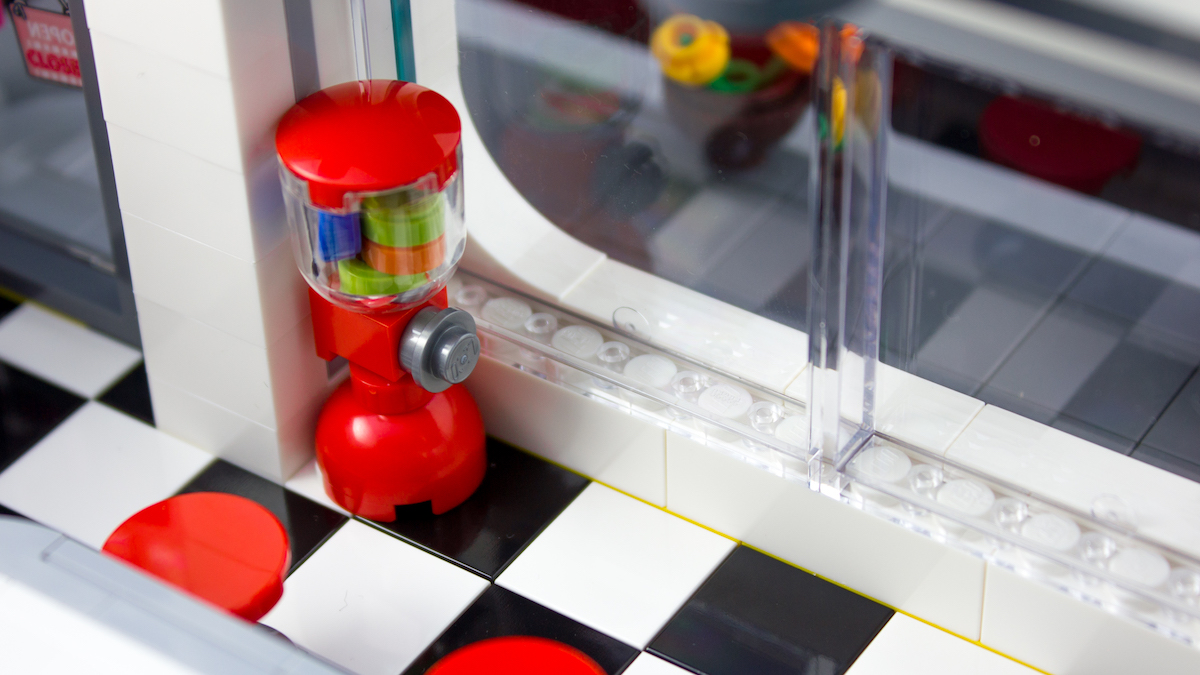 The booths and jukebox aren’t the only red accents in the diner – we’ve also got a gumball machine in the corner, and three red barstools at the counter in front of the grill.

As is the case with all of the LEGO modular buildings, the Downtown Diner was not built with a photographer in mind. The walls make it almost impossible to wedge a camera lens inside (I used a zoom lens for the majority of these shots). It’s certainly not impossible to get the shots you need – you may just need to break down a wall or two to get the angle you want.

I’ve always thought that these structures could do well to copy the Ghostbusters Firehouse, and employ a dollhouse method of opening and closing rather than through the removal of the roof. We’re not there yet, but  unlike its predecessors the Downtown Diner feels like the first modular building to at least be aware that a photographer might use it. There are several instances where the walls or windows are more easily removed than in past builds. Perhaps LEGO is catching on and making these more photographer-friendly. Or, perhaps it’s just a fluke and a side effect of this particular design. We’ll have to wait until the next modular set to know for sure! 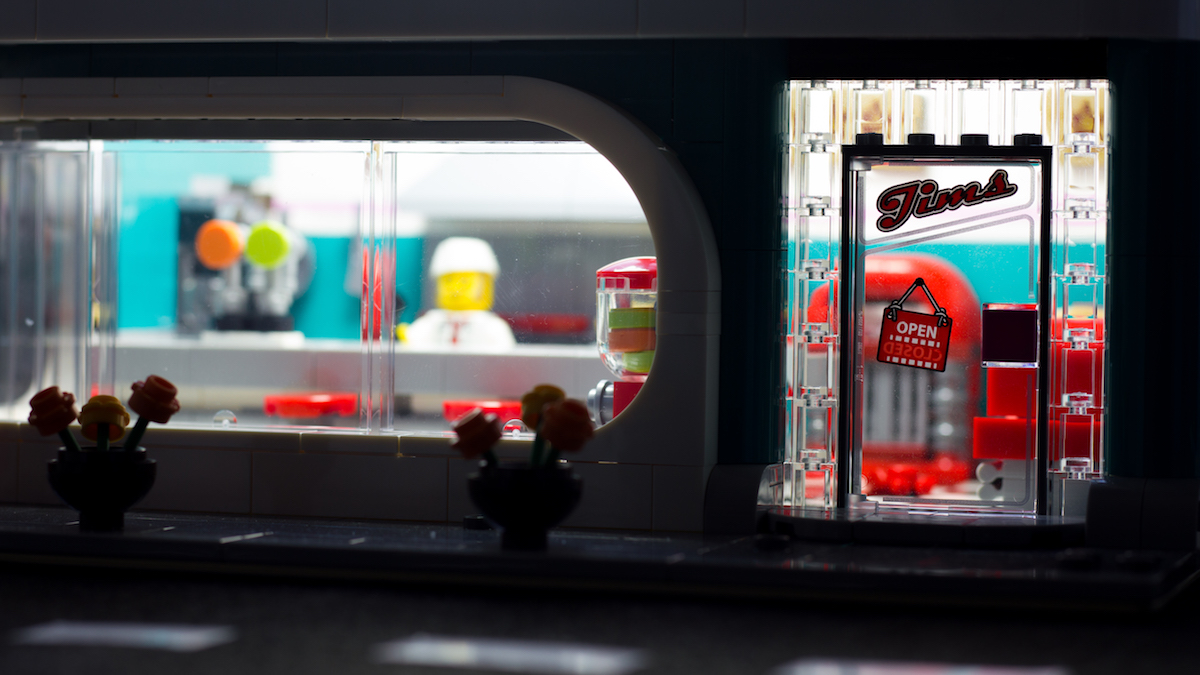 The shining achievement of the diner is the big curved window out front. I didn’t have the heart to remove it to take indoor shots, and instead chose to take a cue from Edward Hopper’s famous “Nighthawks” painting, and shoot through the glass to showcase the goings-on inside.

The photo above was my favorite example of this – I removed the top floors of the modular, and placed my light directly overhead the diner. The light shown through the windows beautifully. The “Open” sign on the door lit up too, and ensured me that this diner was open late, the cook ready and eagerly awaiting his next customer.

Be warned! The glass on the diner is a major dust and fingerprint magnet. I didn’t realize this before shooting, and was paying the price for it in post. Come prepared! 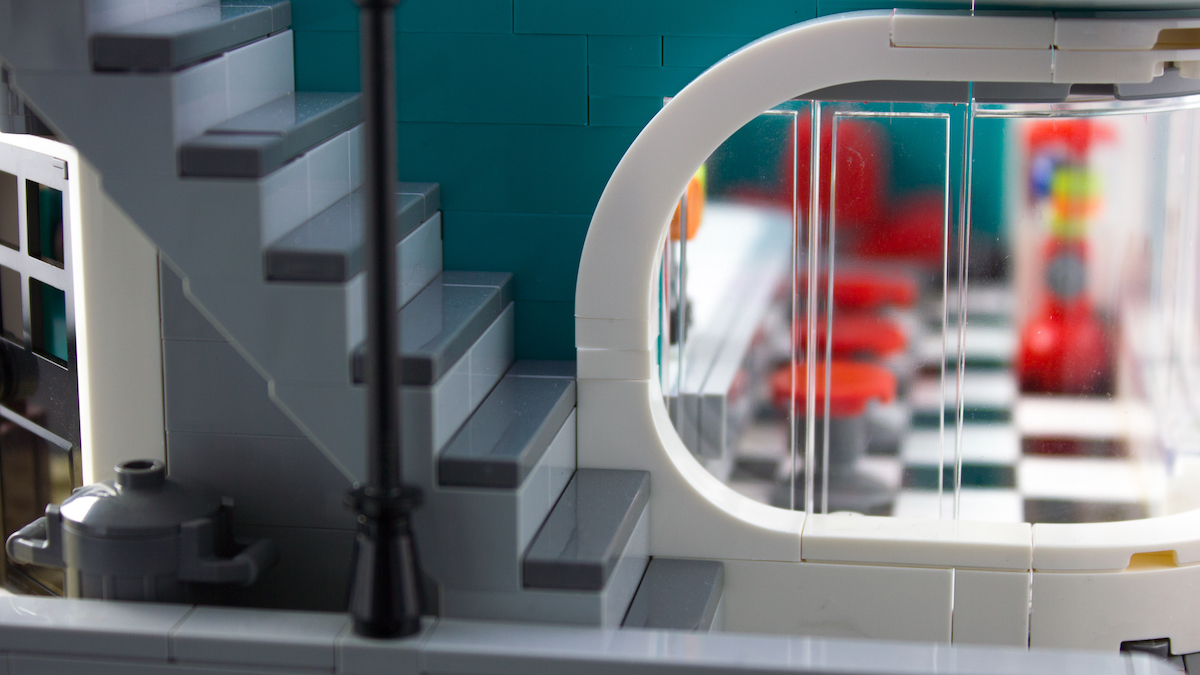 I was amazed at how the details inside came through the windows, even when I was trying to focus on other things in my photos! 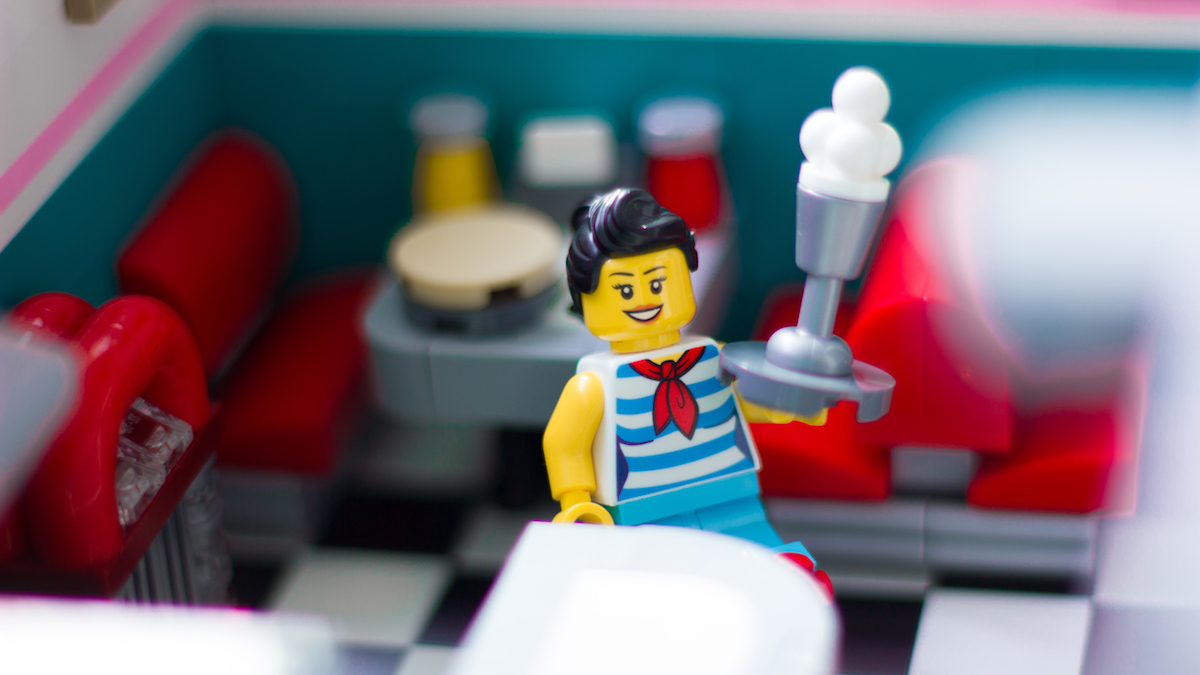 Each floor of the Downtown Diner comes with two accompanying minifigures. The diner downstairs comes staffed with a waitress on roller skates (sporting a fantastic new hairdo complete with ponytail and pompadour! There’s also the aforementioned short order cook, who I think we’ve seen in other sets previously. 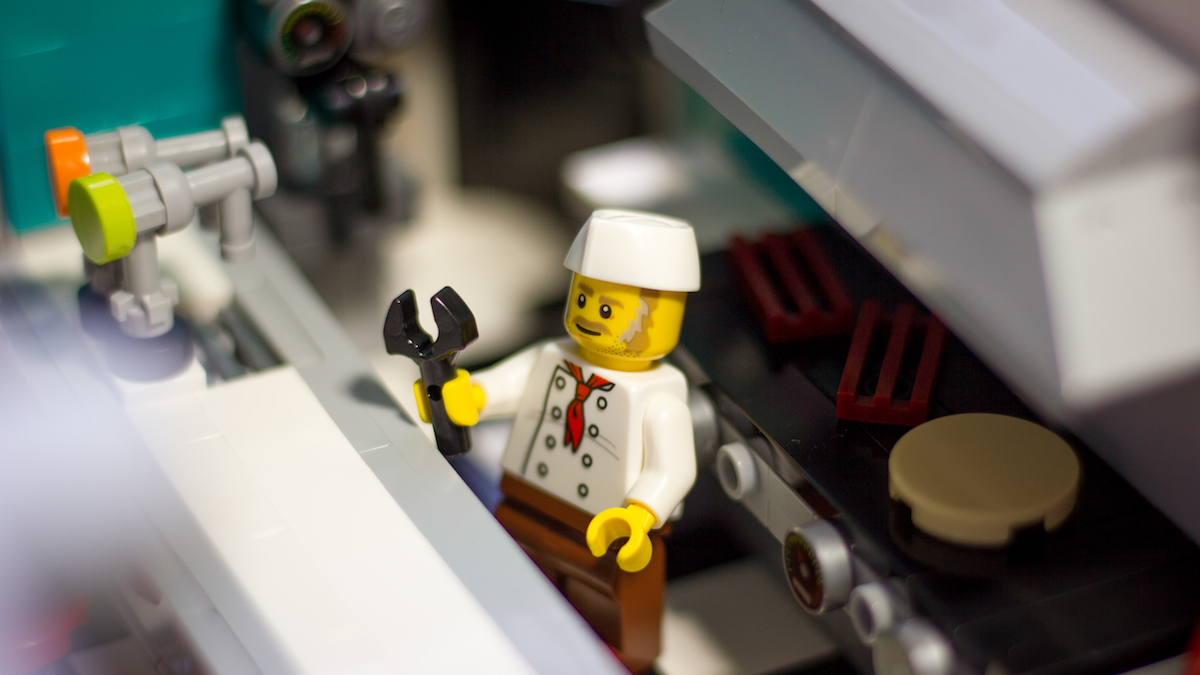 The diner may be the shining star of this set, but things continue to be wonderfully constructed and photogenic as we ascend the building. The second floor contains a gym, complete with weight bench, water cooler, punching bag, hand weights, and a boxing ring! 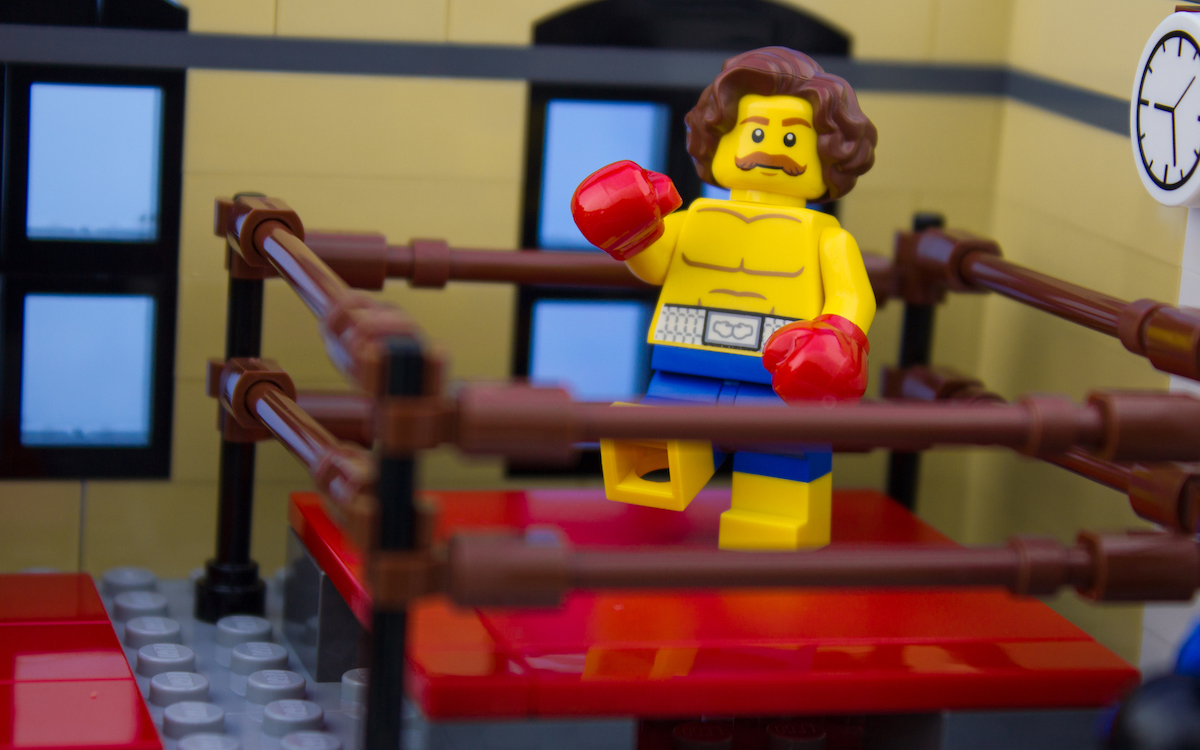 I absolutely love the boxing ring. The “ropes” are constructed with poles and brown bars, while the mat itself is built with a rather large flat red tile piece, that is surprisingly matte instead of the traditional glossy. If you have trouble shooting inside the gym, the boxing ring is easily removed (just be careful not to move the ropes too much!).

The first minifigure on this floor is a male boxer, with a bushy mustache. His hair wavy, medium length hair piece makes me laugh every time I see him! 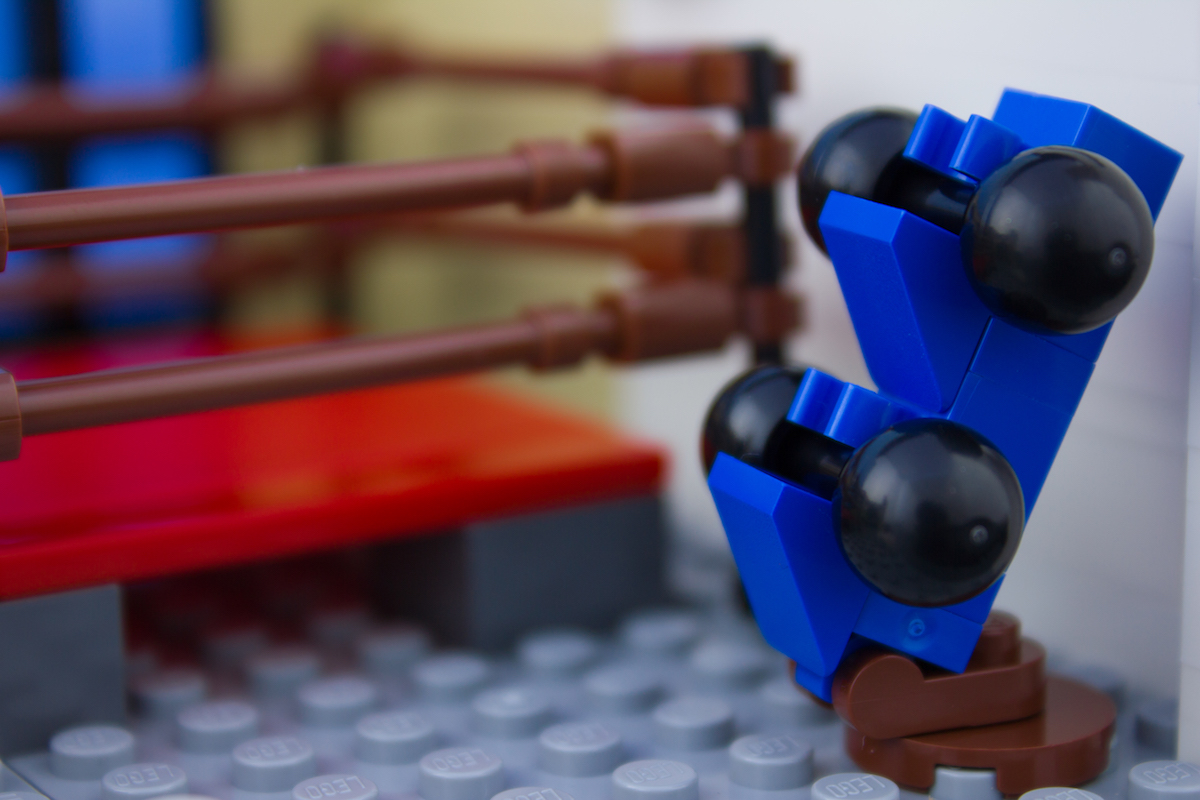 Do you even lift, bro?

Continuing the trend of clever builds, a hand weight rack sits next to the boxing ring, for those who’d rather pump iron than duke it out. 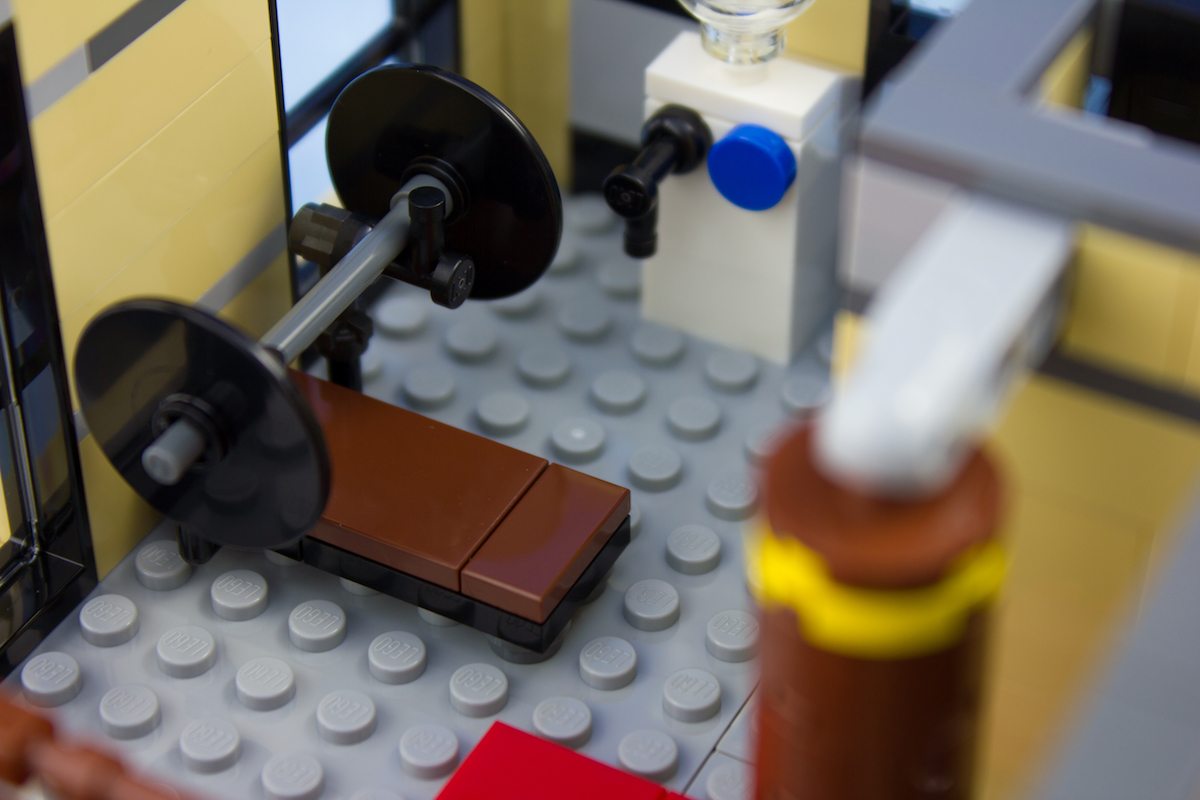 No gym would be complete without a weight bench! I found that it’s great for photos either by itself, or with a minifigure mid-workout. 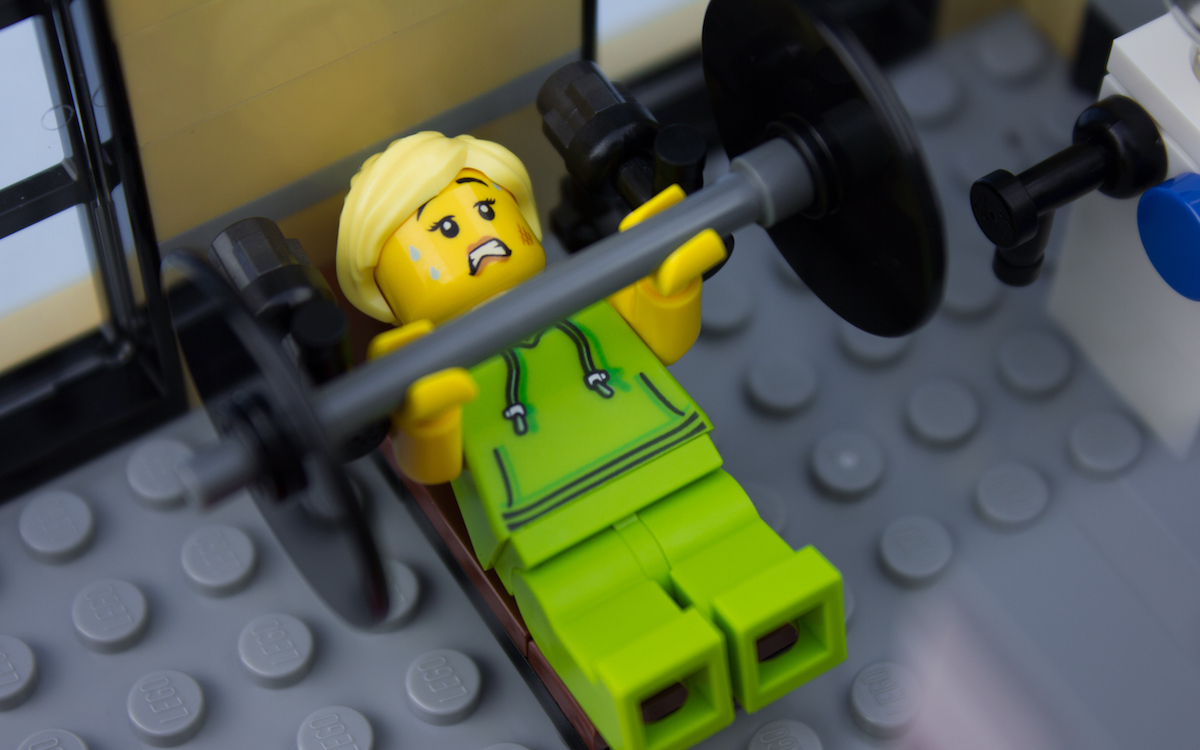 Speaking of minifigures, the second one with a gym membership is this blonde woman in sleeveless green workout garb. She’s one of only two minifigures in this set with dual expressions. The first is a generic smile, the other this strained, sweaty face that I’m sure I’ll get plenty of use out of. It’s choices like this that make me happy these modular buildings have moved past exclusively featuring the standard grin faces. 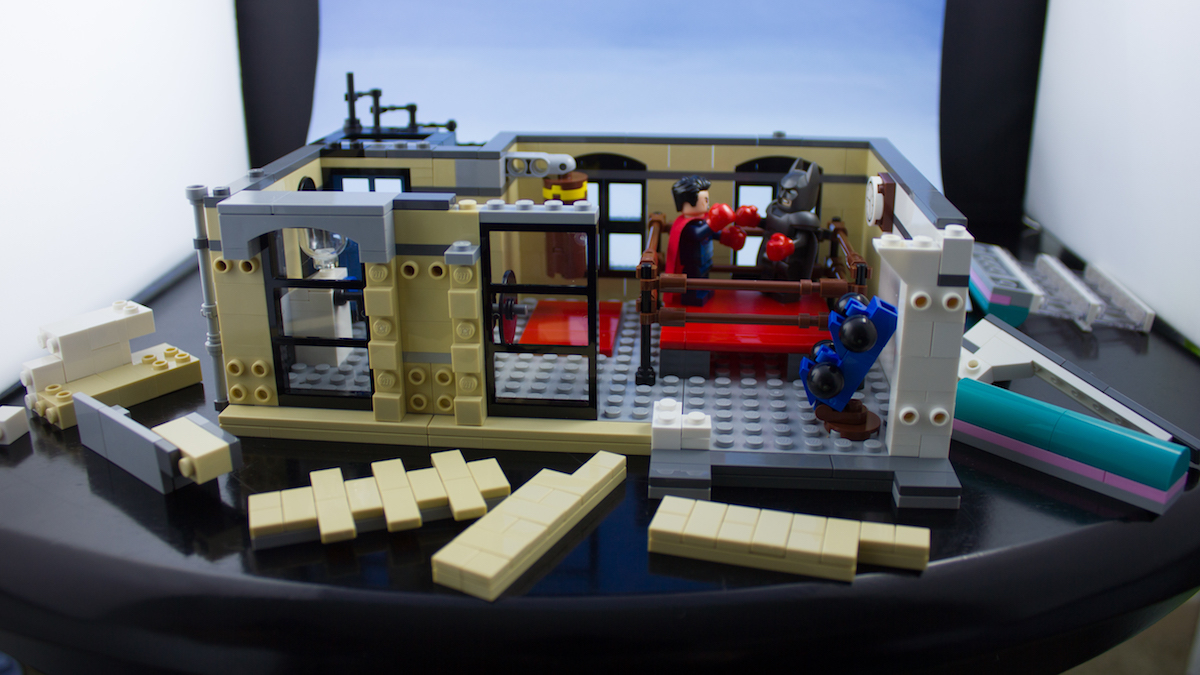 Unlike with the floor below, I didn’t have any qualms with knocking down the walls of the gym to get my camera inside. As I mentioned earlier, this set feels like it was at least partially constructed with a photographer in mind, because many of the pieces are easily removed. The window and teal accents, for instance, came off quite easily without the need to destroy any of the accompanying walls (though I got a bit overzealous and did so anyway). 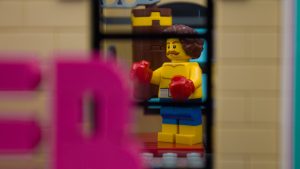 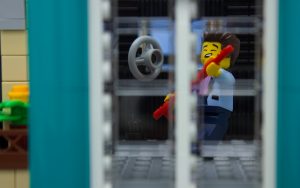 One of my favorite things about this modular building was its abundance of windows. In addition to the long vertical stretch of them between the teal highlights on the front of the building, each floor is covered with windows that give you a glimpse at the scenery inside. This makes the set look wonderful on display, and allows for some fun Rear Window-esque photographs.

The third and final floor of the Downtown Diner is a rather small but cleverly constructed recording studio, completing the 1950s rockabilly motif. 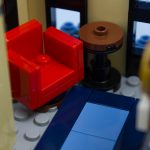 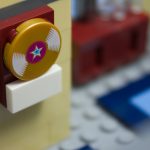 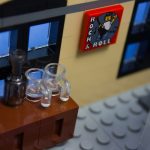 One area of the studio consists of a waiting area, decorated with a comfy looking red armchair, a small bar cabinet, and decorations on the wall that include a gold record and Rock & Roll poster. Each of these elements help set the scene, but didn’t inspire many photos from me. Perhaps with more time I can find clever ways to showcase them. 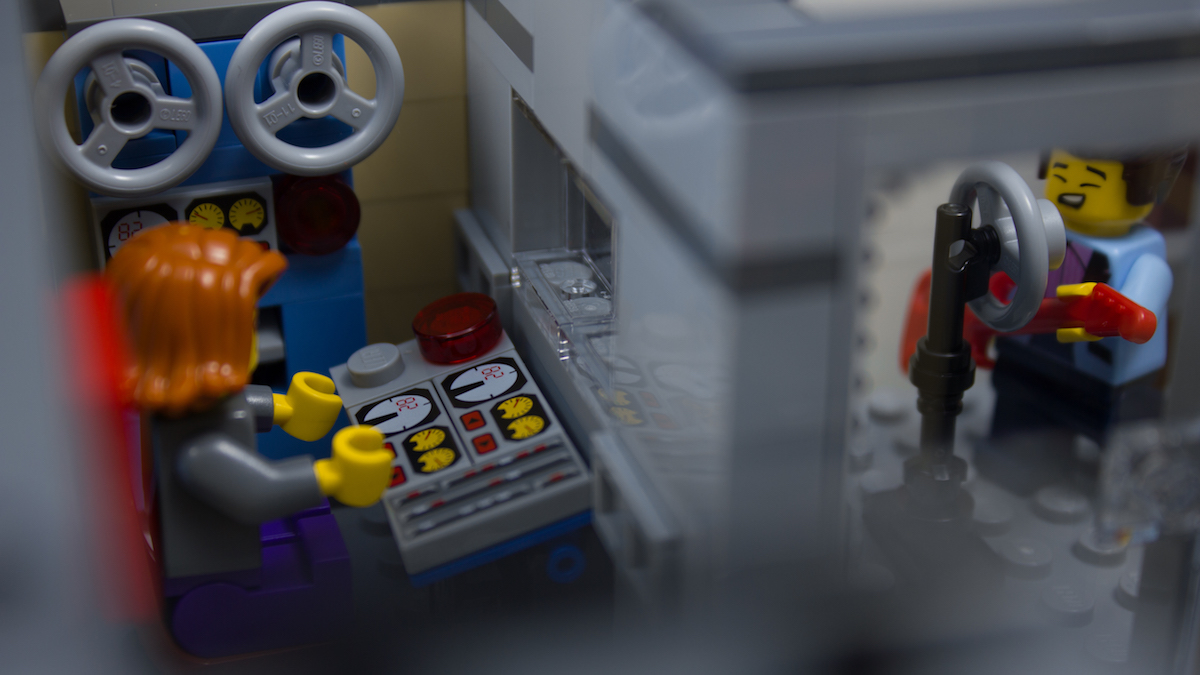 The big draw here is of course the recording booth. I was impressed with how much detail the designers were able to convey with so little space. On one end, we have recording equipment and a female audio engineer. She looks through glass at the booth inside, which houses a 50’s style microphone and Elvis Presley lookalike, singing his heart out. 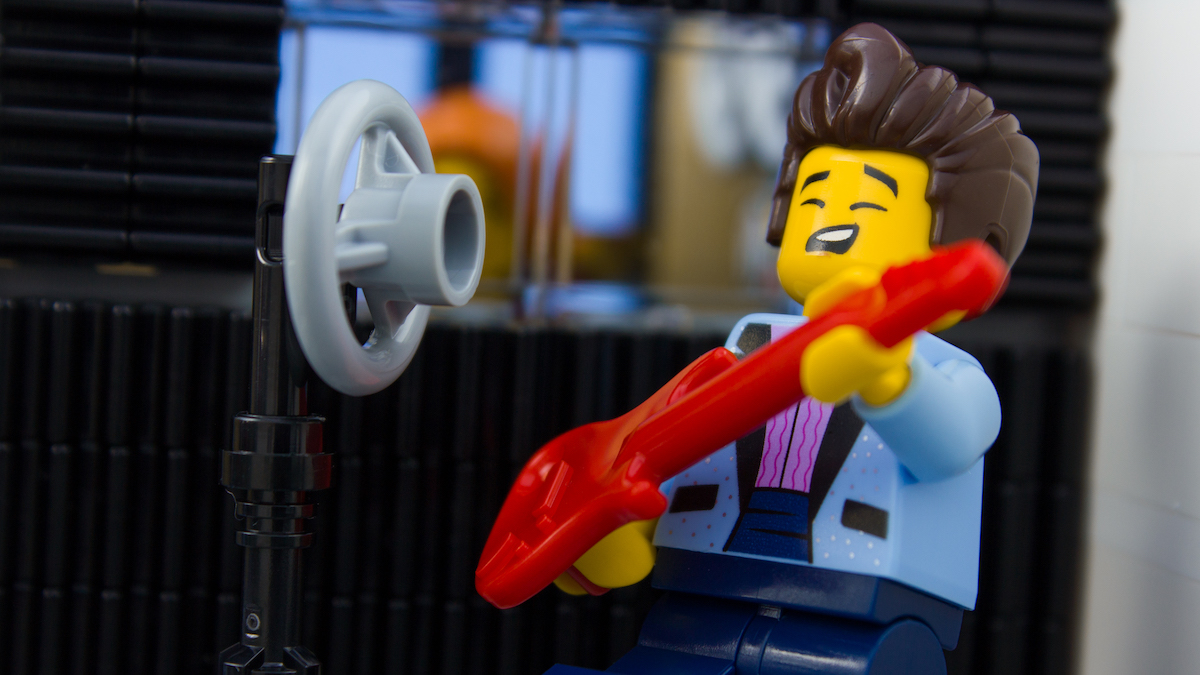 The inside of the booth is perfectly built. One wall is covered in ridged pieces that resemble sound proofing material, which I’ve already stolen for photos for the podcast.

The rockabilly singer is my favorite minifigure included in this set. His blue jacket is adorned with gold glitter, and he’s wearing a ruffled purple shirt and blue cummerbund underneath. He’s got a wonderful pompadour hairstyle, and two expressions. One smiling (below), and the singing face you see above. Or did I simply catch him mid-sneeze? 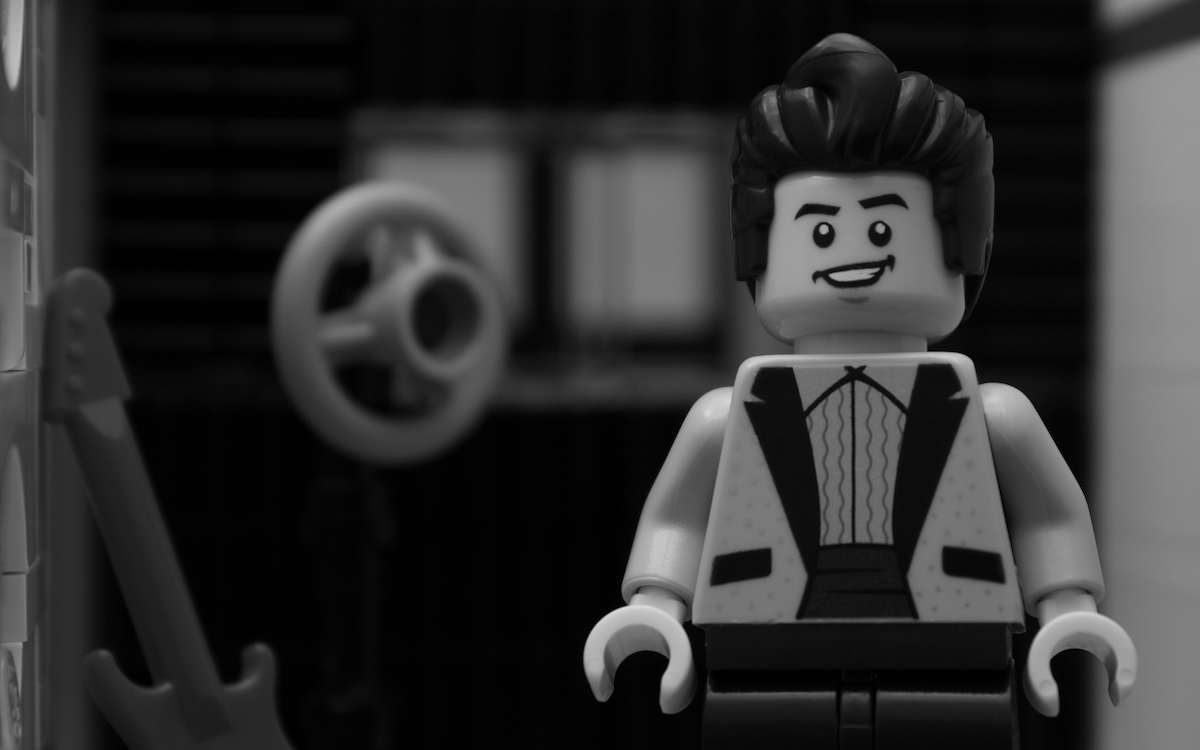 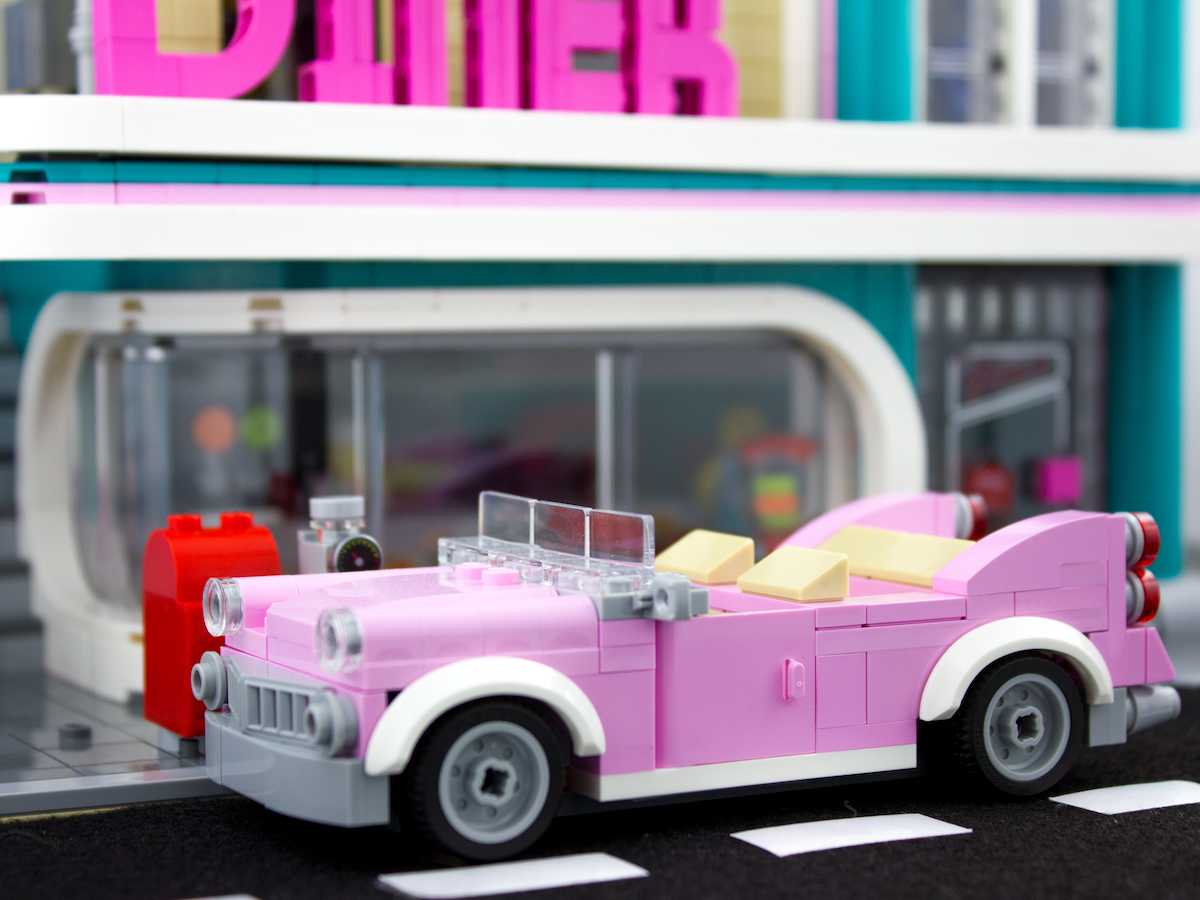 The car looks amazing parked outside the restaurant!

The last major feature of this set is the pink car, which acts as a nice homage not only to the “Hot Rods” of the era, but Elvis’ own pink Cadillac. My father is a huge fan of cars like these. I grew up visiting countless car shows with him, and spending hour in the garage as he worked on similar vehicles of the time period. Those memories all came flooding back to me when I was putting the car in front of my camera lens. Expect this car to show up in many of my future shots! 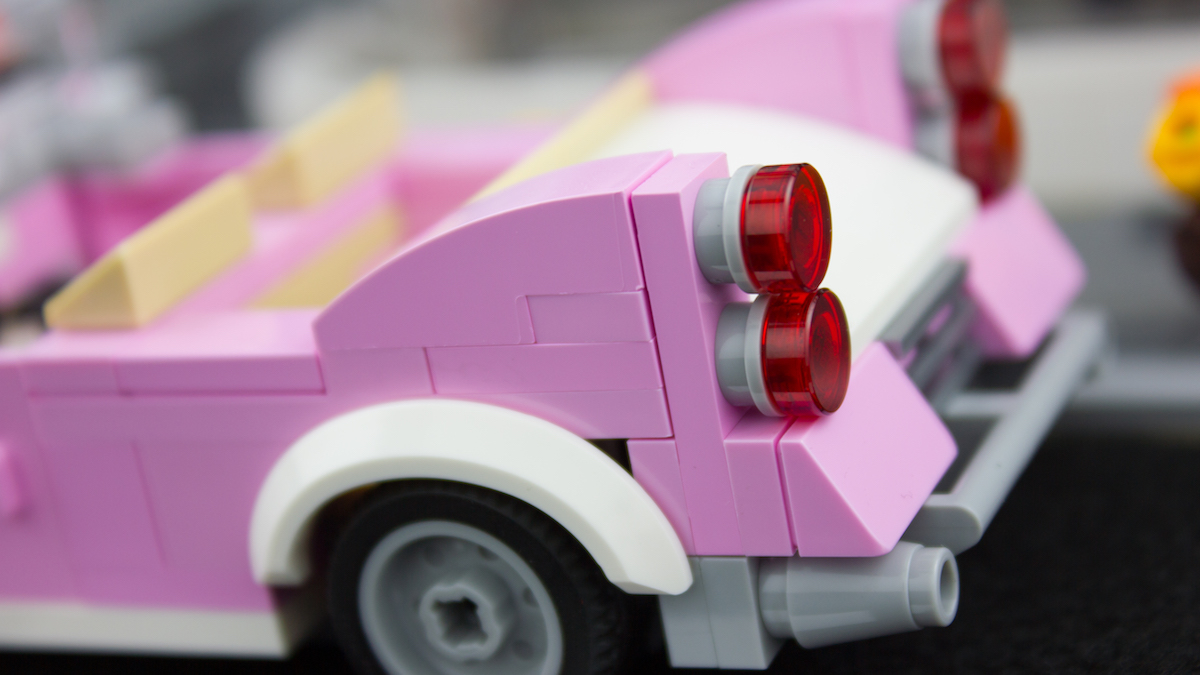 I love the tail fins!

I’m now about 1,500 words into this review, and I feel like there’s so much more to say about this set! If you couldn’t tell by the sheer amount of photos and words posted here, I fell head over heels in love with it. Any doubts I had going in – about the bold colors or highly specific aesthetic – completely dissipated once the diner was in front of my camera. Those things were in fact major strengths in my photography. The colors inspired me to bump up the saturation and exposure, and I was eagerly finding ways to tap into 1950s culture.

I spent hours photographing this building, but have just barely scratched the surface of its photographic potential. I can’t recommend it enough for photographers and LEGO collectors alike! 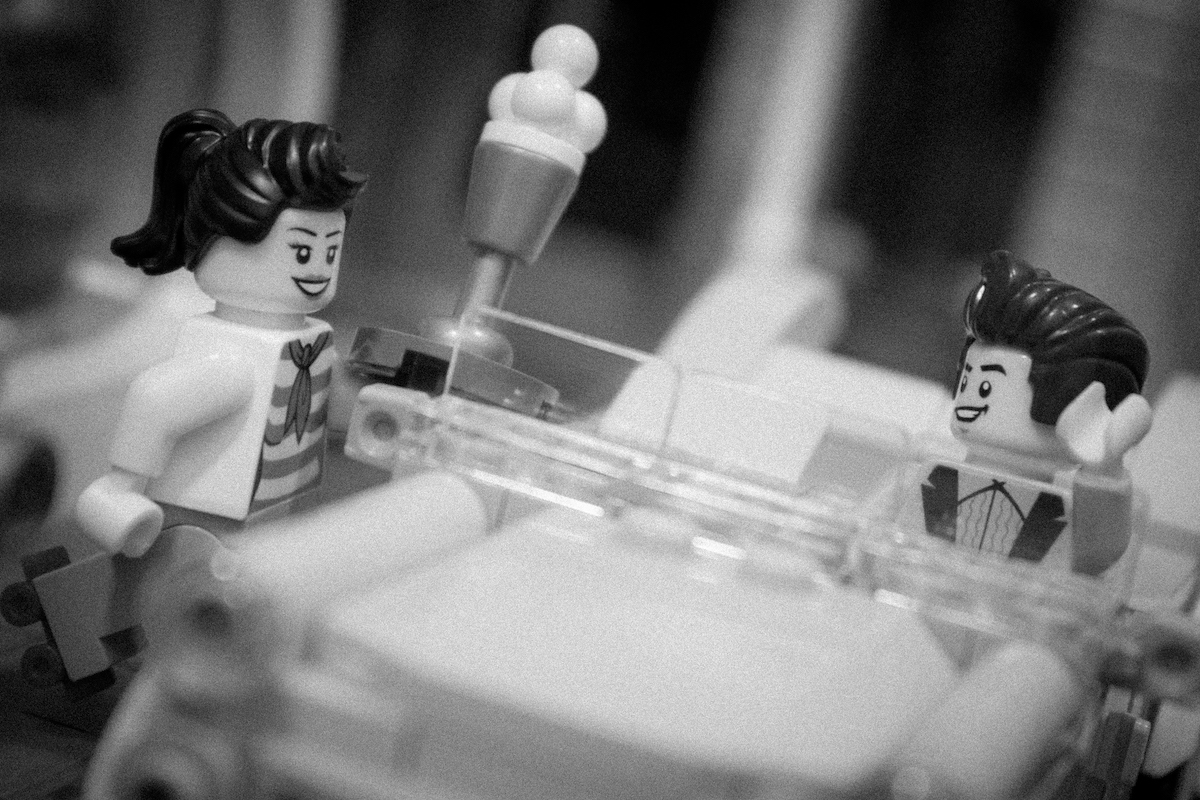 Phew! Thank you for sticking with me until the end. This ended up being quite the set to review, and I’m happy to say that I get to share the fun! LEGO sent me two Downtown Diners, meaning we’re going to be hosting another exciting giveaway!

That’s right, one lucky winner will get their own Downtown Diner. The theme for this contest is “nostalgia.” Are you nostalgic for 1950s culture, with fancy cars and rock & roll? Or maybe you just read Ready Player One and are missing the 1980s! The choice of nostalgia is yours. Post your photos on G+ and Instagram using the #toy_photographers and #toy_photographers_nostalgia tags. You can enter as many times as you’d like, and unlike our minifigure series giveaways, everyone is eligible to win, including previous winners!

You’ll have a bit more time for this contest as well. I’ll announce the winner here on the blog in just under a month, on May 19th. Happy shooting! I can’t wait to see your entries.

Have you picked up the Downtown Diner yet? What did you think of it? Sound off in the comments below!