Shelly has asked us if we were willing to write a guest entry for her blog Toy Photographers. Apparently, the most amazing photographers gather here. We have certainly come to value the excellent contributions and pictures of the team and their guest bloggers. So, yes, we thought, we’d contribute something too.

We – that is Mic and Sören from Dresden, Germany. For the last three years we have created and photographed funny scenes with mini figures.

But what could we write about? What is there that could be interesting enough about us that someone else would want to read about it? Wow … even thinking about that is hard work. Pretty much all of last year has been hard work. One thing came to another and we were practically rolled over by the events. But first things first.

Our first photographs were exclusively published online. We have accounts with Instagram (@eat_my_bricks) and Facebook. It was a revelation to us when we realized what a great community there is in toy photography. Worldwide. The appreciation and feedback from the community is simply amazing. 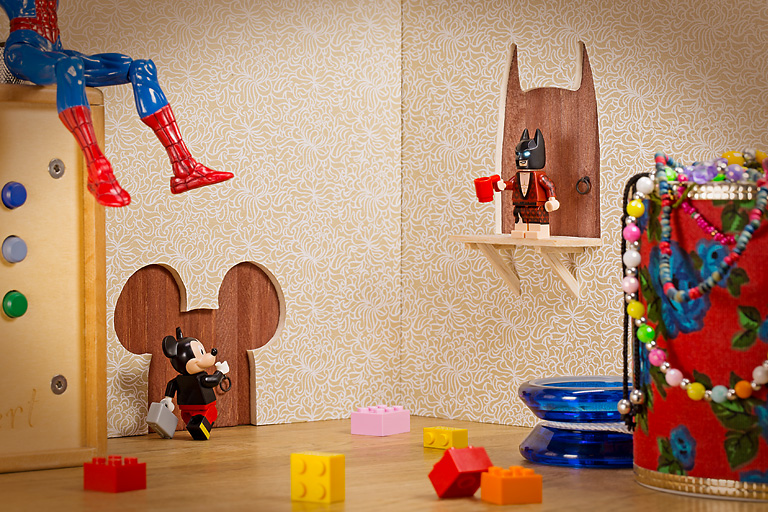 Early in 2017 we were approached by an advertising agency in Los Angeles. They were wondering, if we had considered professional Lego photography. Their client? Lego Dimension! At this point, we had created and published about 100 pictures. So we thought: What the hell! Us? Making money with plastic mini figures? Why not!

At around the same time we met this nice gentleman who runs a comic and merchandise store with action figures, shirts, mangas and that sort of stuff here in Dresden. He suggested that he would put up some of our pictures in his store to see would they sell. Why not! We figured that type of cooperation also deserved some kind of local recognition: like …. an exhibition! Our first exhibition! We had almost 20 high quality prints (sized 60 x 40 cm) produced, printed some flyers and invited the local press by email. All of that took time, energy and nerves.

The exhibition took place on a Saturday in April and stayed open for an entire six hours. And the best thing about it were the happy faces of laughing visitors. They really seemed to enjoy our pictures. We sold 15 of them, straight off the walls.

Next thing, a journalist from a large local paper arrived. With a photographer, might we add. She interviewed us and the photographer literally put us in the spot light. Two weeks later we were in the paper. A full page just about us in one of the biggest local newspapers! And with big reprints of our pictures. Wow. What a feeling! Perhaps, a bit strange, also. 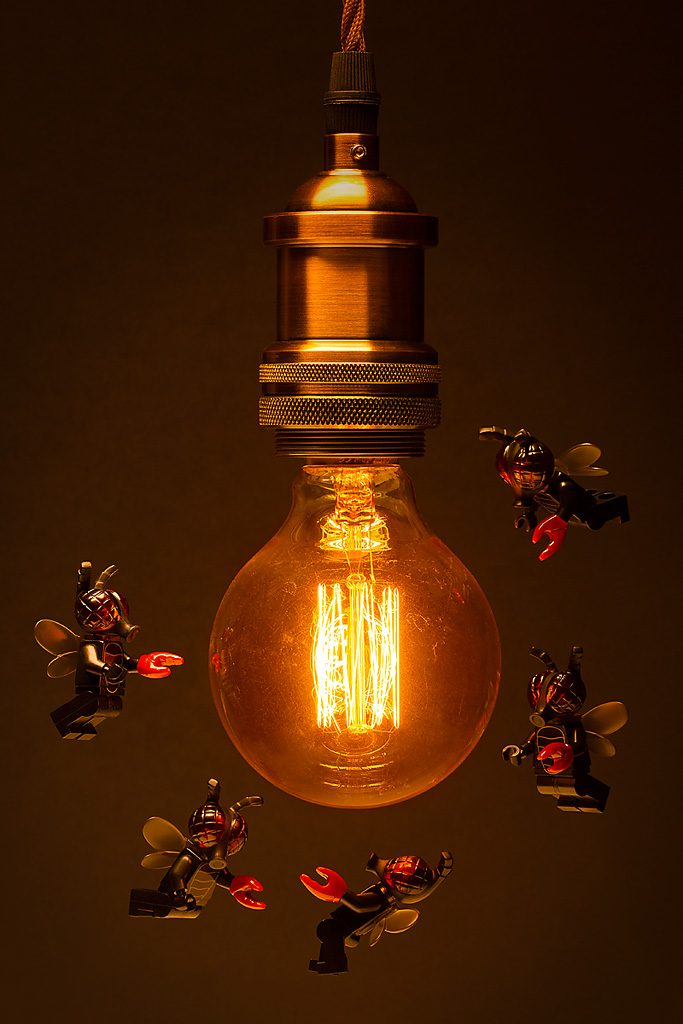 At the same time, we began to communicate properly with Los Angeles. First get-to-know talks via Facetime, a few briefings, schedules, negotiations, scribbles. Things were beginning to get serious! They booked us, with a contract and all and we had to deliver. All of a sudden, we had to get accessories, plan a motive, keep schedules, wait for feedback. Our hobby was no longer a past time. It was now work. There was a client. And that client had an opinion and expectations: can we have this and that, but not that. And, wait, this doesn’t work at all. And whatever you do, don’t use any groceries. Kids could be copying this!

So, Mic and I met, usually in the evenings, after long days at work for our new part-time job. But not before the kids had been sent to bed, date nights with our women had been postponed and equipment had been carried from one place to another. We were a bit pale and tired looking during those weeks, we’re told. Have you ever tried to arrange mini figures in a somewhat cool arrangement at 11 pm after a full day of work? It’s not exactly child’s play! But we did it! The client was happy and a short while later a few dollars arrived in our accounts. Money made with toys. Wow!

Then we received another email. Someone working with the Dresden Trade Fair Grounds had read the article about us in the local newspaper. She said she thought the pictures were amazing and was wondering if we wanted to do something for the next Toy Fair. So we met with her, had a good laugh together and started thinking.

To be honest, at that stage we had zero energy for another project. But she wouldn’t let us off. And she made us an irresistible offer. We could exhibit our pictures at the Toy Fair. For Free. Wow again! 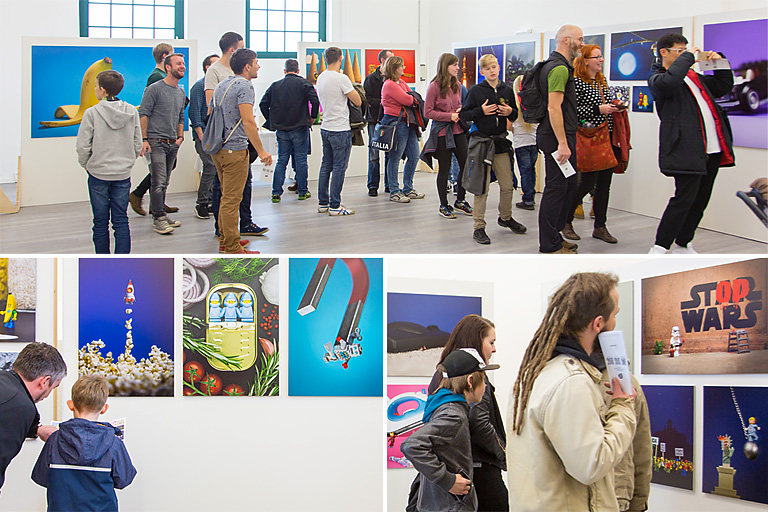 So, we had our pictures reprinted and reframed. This time, we had almost 30 images. We also decided to do posters and postcards with our pictures. And, of course, some flyers with both pictures and a bit of information about ourselves. We re-invested our American Dollars.

The exhibition turned out to be our biggest and most memorable event last year. We reached out to so many people and in return got nothing but positive feedback from people who got a laugh out of our pictures. At the same time, it became a bit much. Too much! We only made it through the exhibition weekend with the help and support of our families. We would never have managed on our own – just the two of us.

Shortly after, we were approached again by Los Angeles: the client was looking for more pictures … asap. The timing wasn’t great. I had just moved to a bigger apartment with my family and had to sit exams for my childcare qualification. Mic was travelling for work all over Germany on a daily basis. We were done. Exhausted. Couldn’t keep going. No time. No interest. No energy. Our families barely saw us. We turned down the offer and decided not to sign another contract.

And then another email, from Daniel of the “Bunte Welt” (which means “world of colours” in German). We had met him at the Toy Fair. He runs an indoor playground here in Dresden with various play stations. You can do pretty much anything there: racing dinkies, playing with knights in castles, playing board games, doing lego, trying tactile games … you name it. It’s essentially a huge play room for kids and adults. Daniel said in his email that he really liked our pictures. He was wondering if we were interested in working together. Wow! 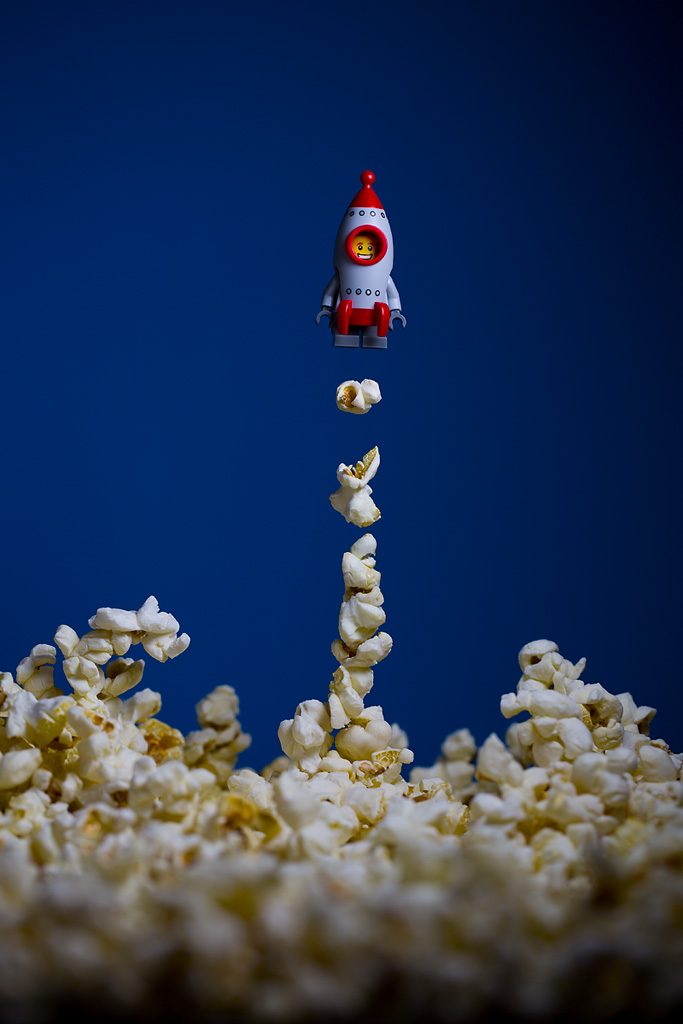 Yes, of course, we replied and visited him in his play oasis. We could see it too: it was the ideal place for our pictures. Daniel took care of everything: production, picture hanging, advertising, press releases. And what did we do? We didn’t even have time to go and look at our own pictures in the “Bunte Welt”. But we will. Promise. Soon. Next week for sure!

In between all of this, every so often, we have those moments when we get an urge to do a new picture. I felt this urge in November. So I told Mic about my idea: an online advent calendar. 24 days, 24 Christmas scenes. A little personal challenge, if you will. Just to get back in touch with the community and have a bit of fun. Something to try out. Something new.

So you are familiar with the hectic pre-Christmas season, yes? Oh man! We definitely shot ourselves in the foot with this one! Nevermind work and getting ready for the family Christmas. Now we had started a 24-day project. We needed a full Saturday and two night shootings to get the 24 scenes into the box. And that’s not counting the hours to prepare and put together props, or the time spent on the pictures once they were taken. Having said that, the response from the community definitely put us into the Christmas spirit. It was amazing! We had so much positive feedback – we couldn’t believe it, particularly since we hadn’t been very active on Instagram. Excellent! We quickly felt it had been worth the effort. 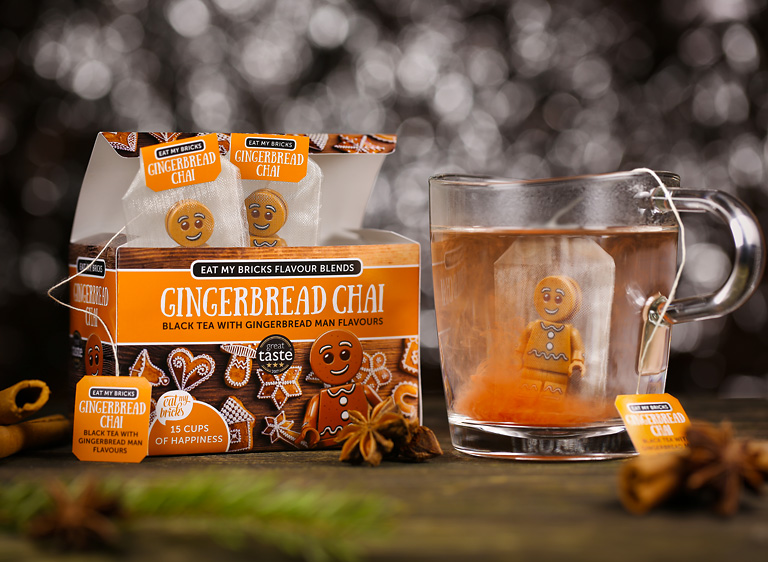 Oh yes … and just before Christmas we got another email from the Trade Fair Grounds. Would we be interested in an exhibition in January as part of a New Art Trade Show. We can have thirteen walls altogether. For free. Wow again! We turned down the offer.

And 2018? Not a clue! We don’t have a plan, just a couple of ideas. We’ll have to see if we can find the time to work on these. We’ll cook up something, I’m sure. Even if that is no child’s play either!

Thank you to all readers and visitors.

Thank you to our families.