The Power of Two

I enjoyed reading Shelly’s blog post “Three is a magic number”.  I certainly agree that three subjects can make a fantastic photo but I think the “Power of Two” should not be overlooked.  Most of the time, I find myself photographing just one or two subjects.  Occasionally I’ll include a third subject but for me, having too many minifigures in the frame makes the setup and lighting more complicated and may dilute the interaction between the subjects, similar to the phrase “two’s company but three’s a crowd”.

Here are some themes that I like which revolve around the power of two:

One of my first themes and definitely one of my favorites, this theme gives me the opportunity to show couples either posing for a portrait or taking a romantic stroll on the beach.   I always like to imagine what their relationship is like and what their thoughts are while they are posing for the photo.

For example in the “Cute Couple Boxer Photo”, I imagine that Kara and her boyfriend probably goof off and spar together often, so it makes sense that she would playfully punch him during the portrait session. 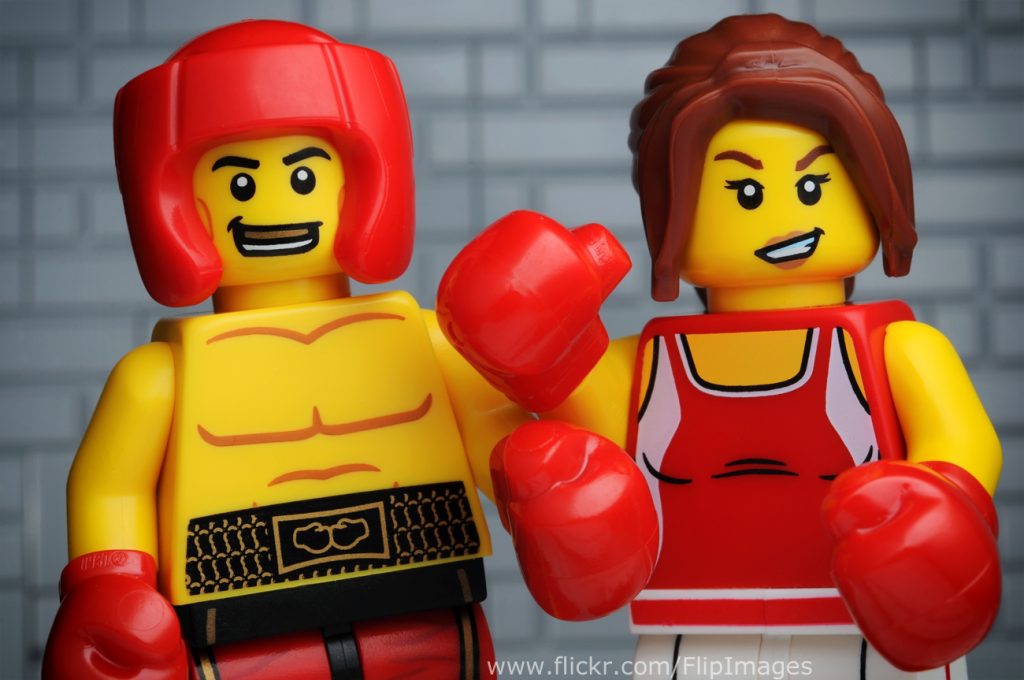 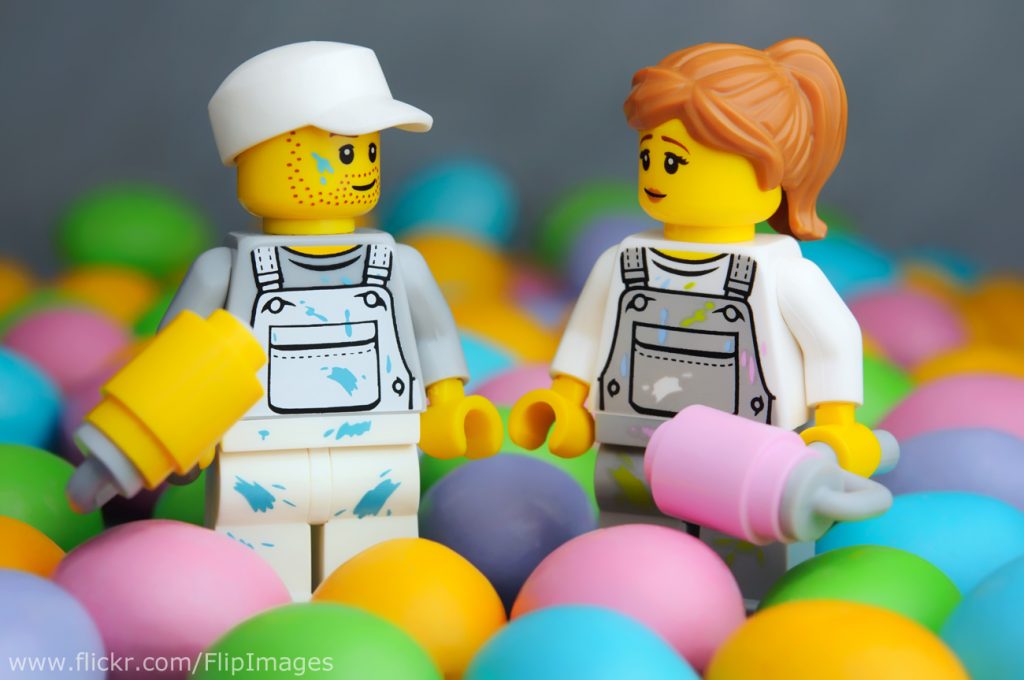 Or the unlikely couple, Officer Joe and Selina the jewel thief, gazing into each other’s eyes while having coffee.  It looks like the two of them are having a private moment, so I didn’t want to bother them for too long…… 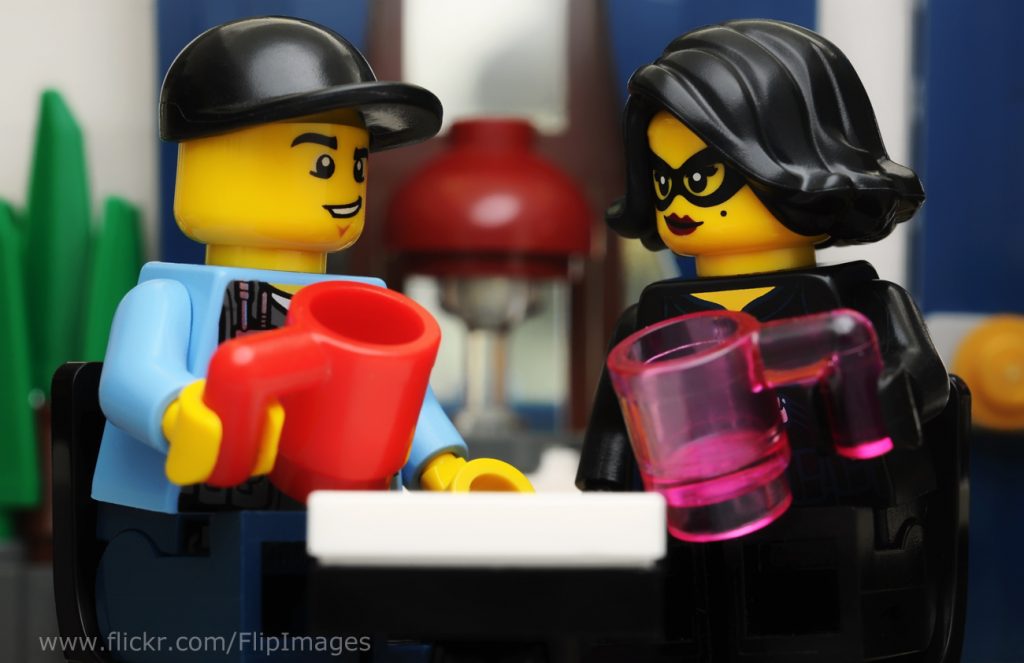 Another concept that I enjoy focusing on is “Best Friends” – especially the pair of gymnasts, Beth and Rebecca, as best friends and training partners.  They support each other through the tough workouts and stressful competitions.  Because of all the tough training they’ve been though together, they’ve developed a bond and I try to capture that in their photos.

Here the girls chit chat while chalking up for uneven bars: 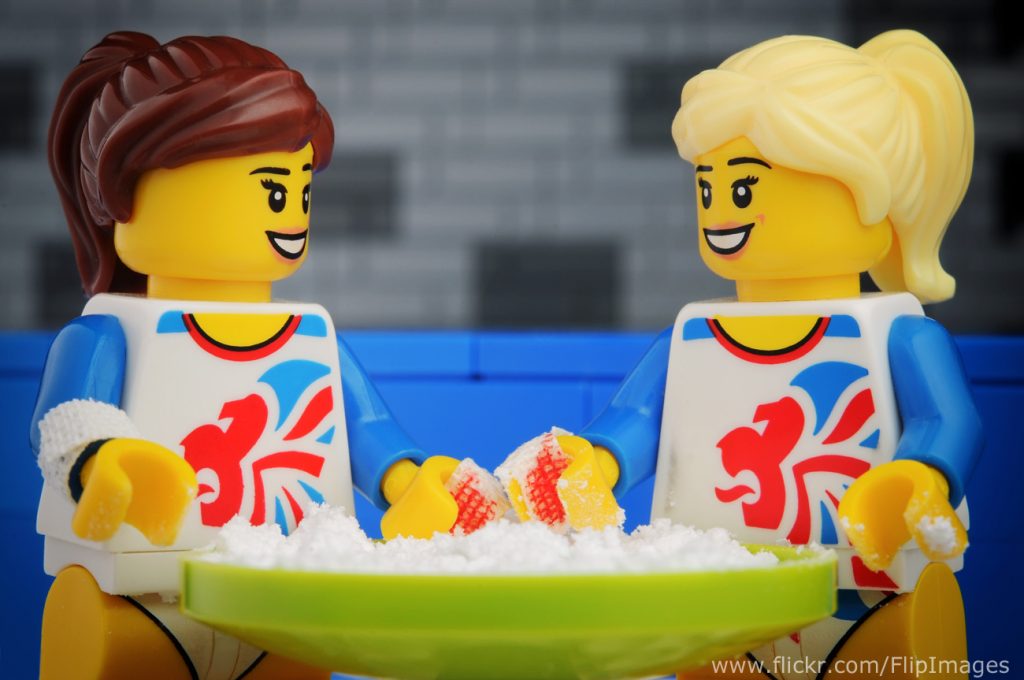 Looking exhausted but feeling happy after a long workout: 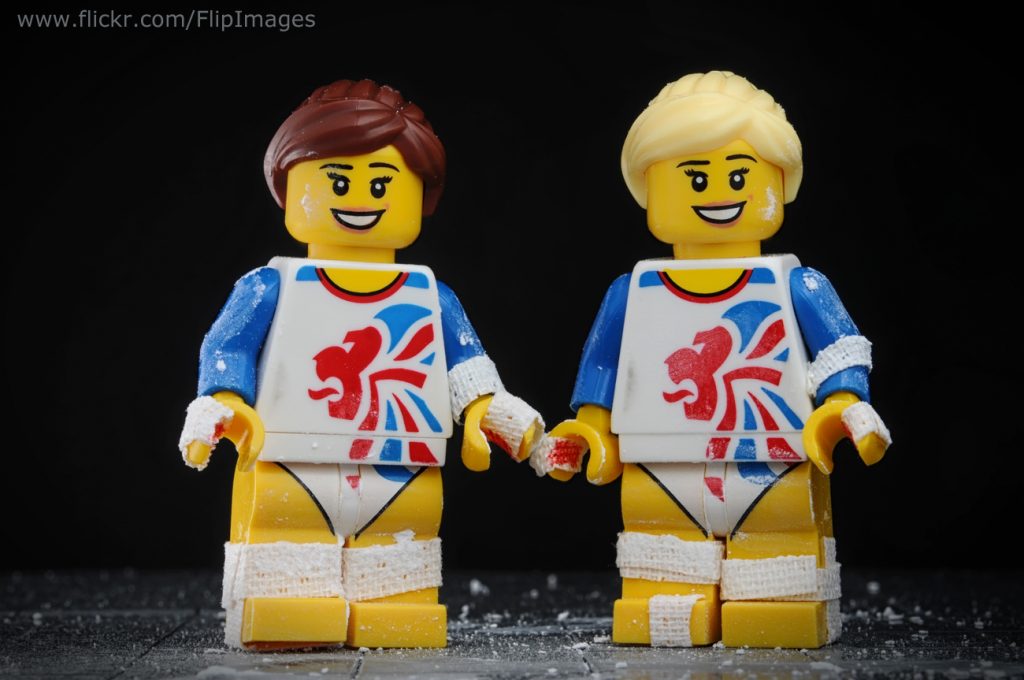 After the competition is over, they have fun taking a selfie together: 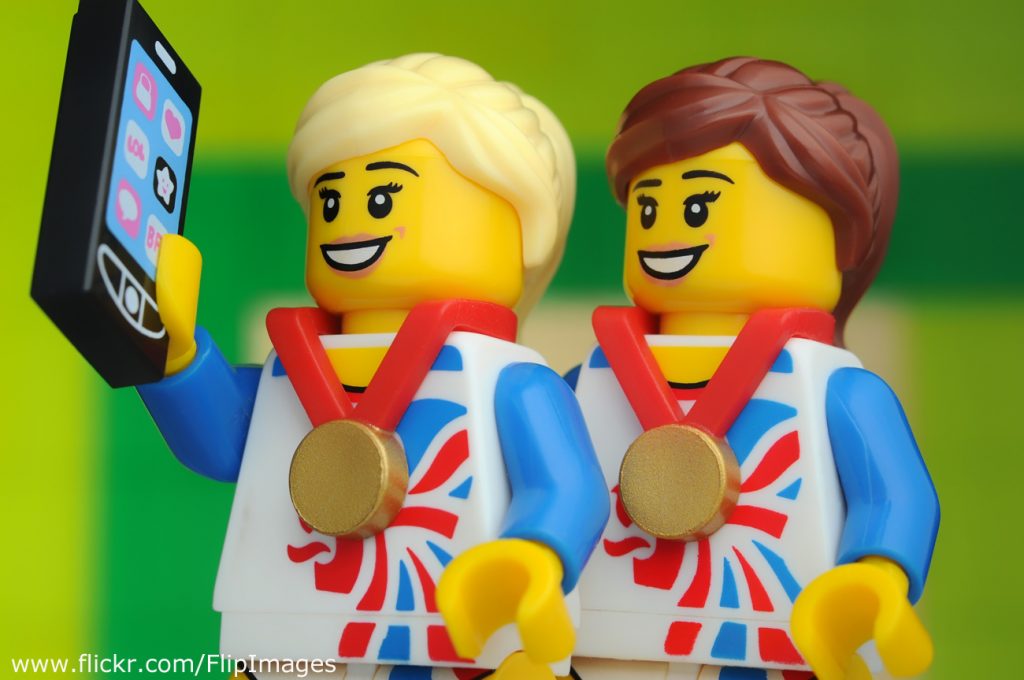 The Best Friends theme extends to other minifigures as well.  I enjoy coming up with scenarios that minifigures with similar interests would do together.   For example, Angel and Pearl spend the day baking together.   They look like they are having so much fun, I didn’t want to bother them plus their cakes and cupcakes looked delicious and I was getting hungry. 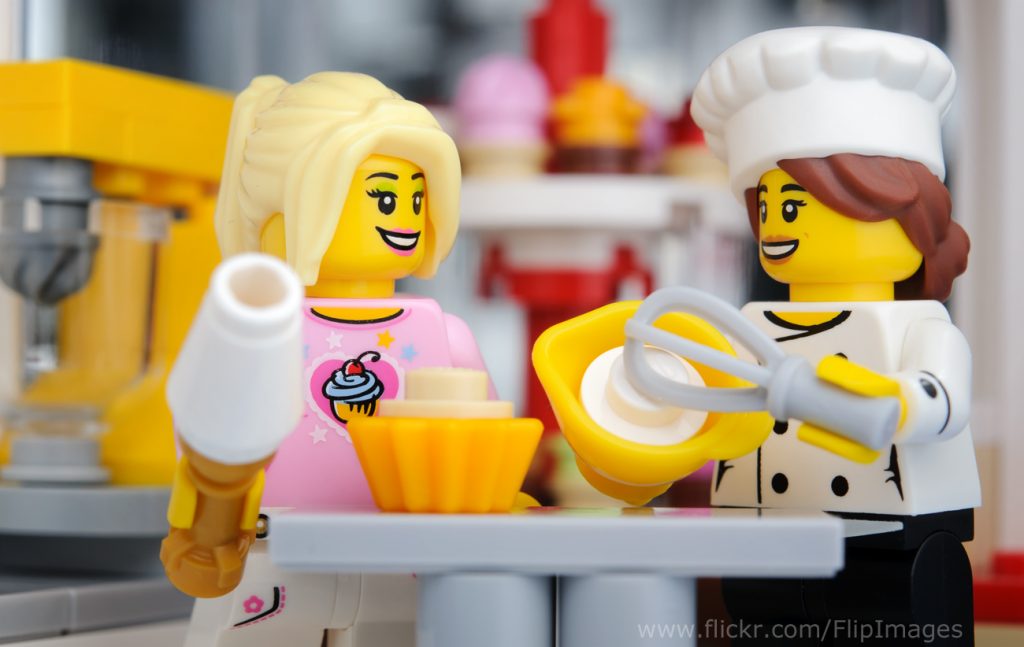 Or maybe one friend can convince the other friend to try something out of her (or his) comfort zone, like Executive Elise and Executive Ellen.  I don’t think Ellen ever went on “The Shaker” again though. 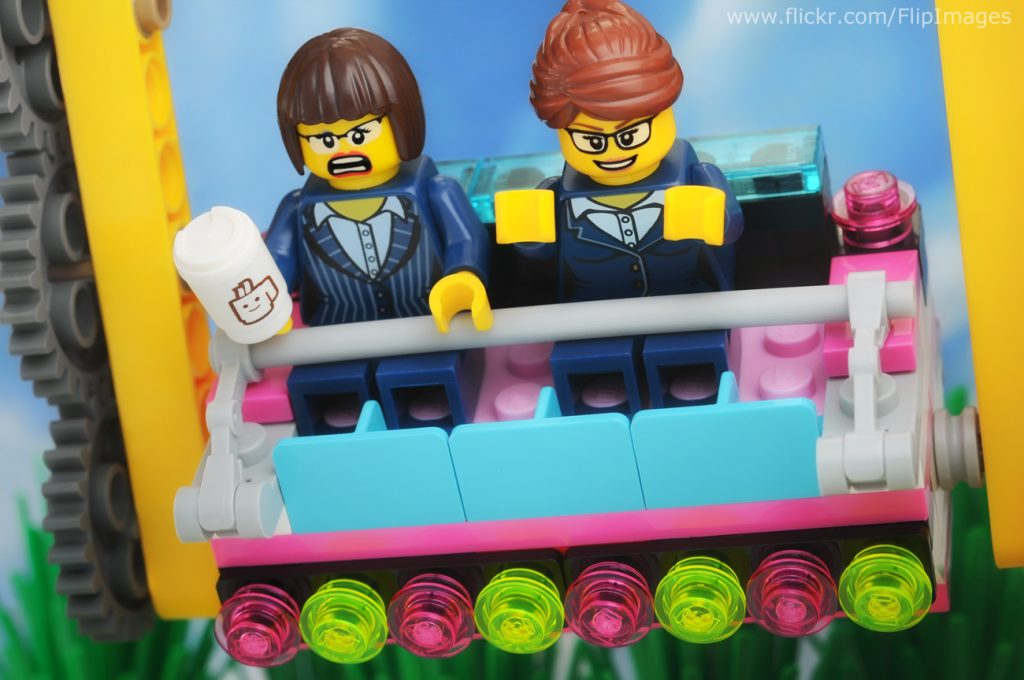 I think having fewer subjects in the frame allows me to focus on the interaction between the subjects.  I’m able to explore the relationship between couples and hopefully portray the closeness of best friends. For me, that’s the “Power of Two”.

How many subjects do you like to have in your photos?  Is there a theme or a special relationship that you like to portray?