Our friends at LEGO sent us a box of the Ninjago Movie Collectable Minifigures to review. Here it is…

Lloyd (or L-Loyd according to his dad) comes in a green hoodie printed top, with a new headpiece for the hood with his fringe poking out below, which allows for greater head movement. 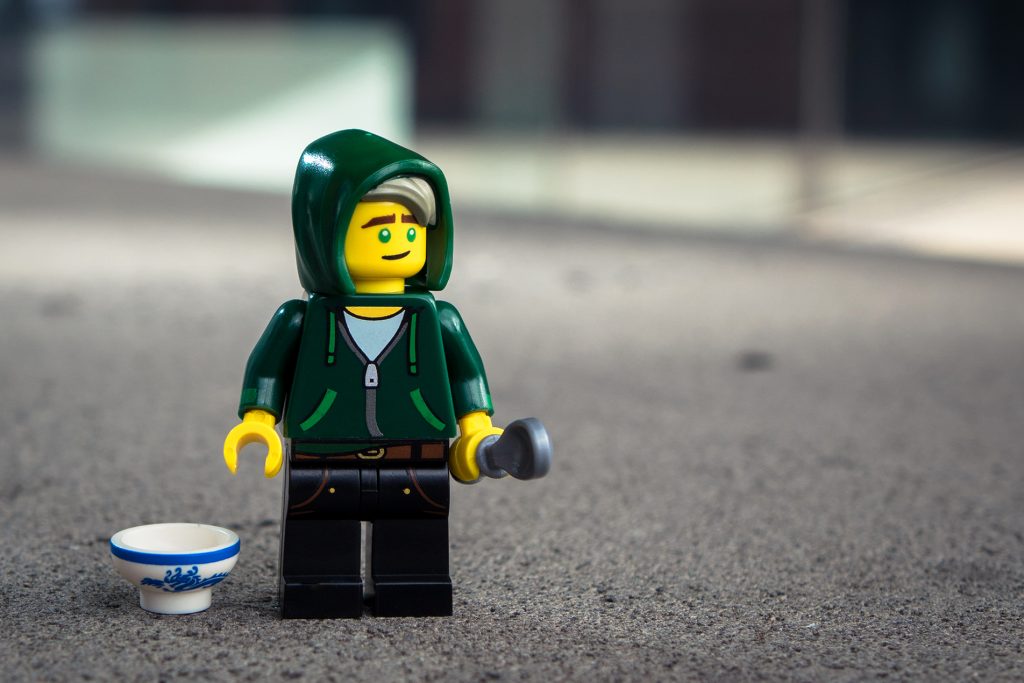 His black jeans are held up with a brown belt. The silver spoon and white bowl with blue trim and dragon motif are great accessories.

What appears to be a standard Ninjago inclusion, Lloyd offers up so much more. His Ninja headgear is two-piece, with the upper piece with a green scarf and golden printed emblem. He also has his blonde tussled hair should he want to reveal his identity from under his mask. The printing on the legs, arms and the front and back of the torso is great. 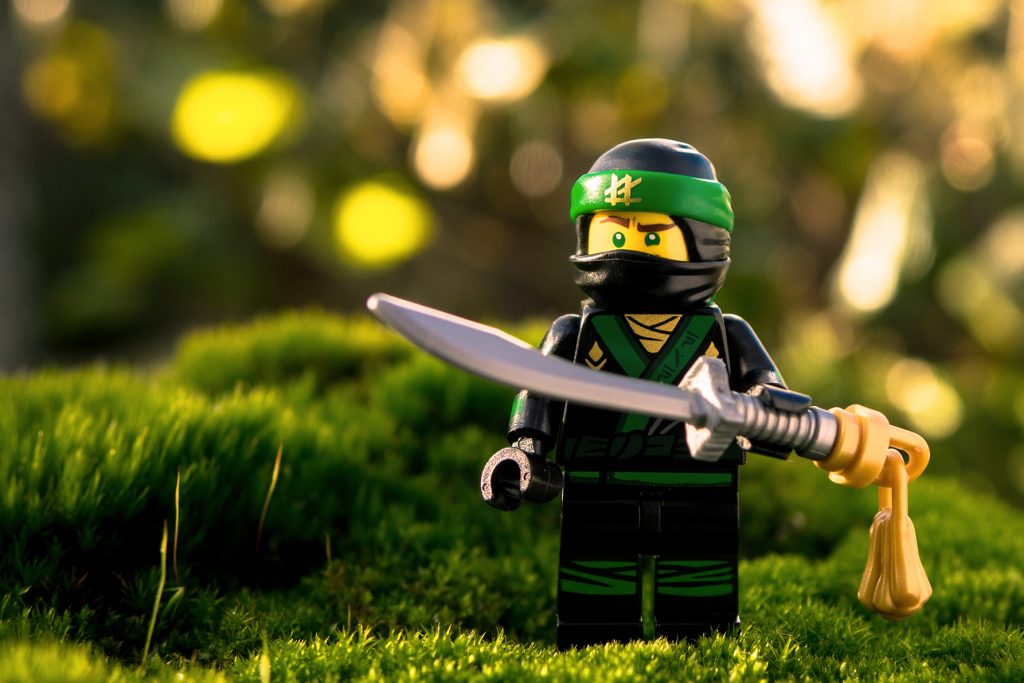 The gold tasselled, silver sword is another great addition. 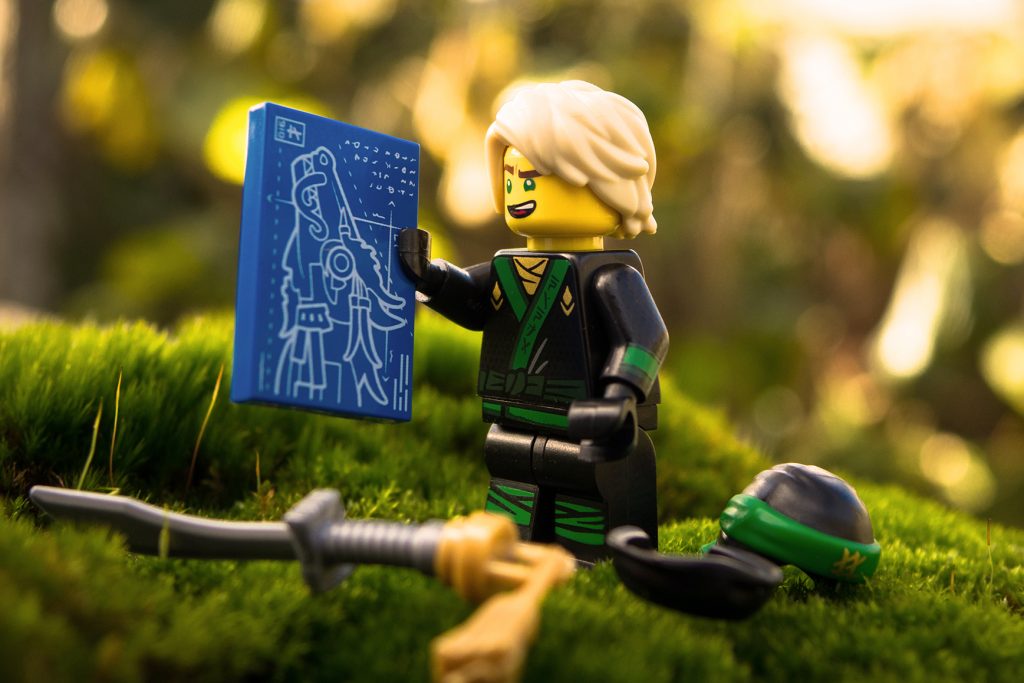 He also carries a 2×3 tile with blueprints to a dragon printed on it.

Lloyd’s mom Misako’s hair and torso are fabulous. Her orange hair is held back in a bun with two red chopsticks. Her sand green jacket has some golden floral motifs added, a name tag with “koko” on it and sits over a white blouse. 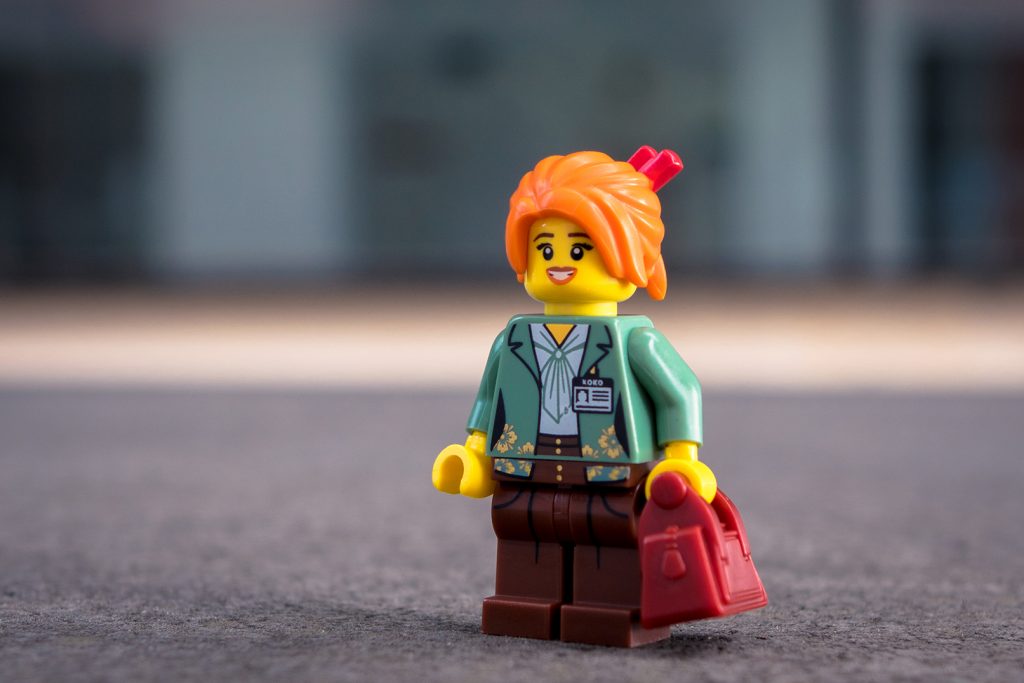 The two gold buttons of her brown are doubled to four with the pant print continuing to the torso, just as the gold floral motif of the jacket does to the legs.

Much of the print on Master Wu’s torso is hidden under his beard, which is a shame. The traditional top includes arm printing and a traditional emblem in red on the back. 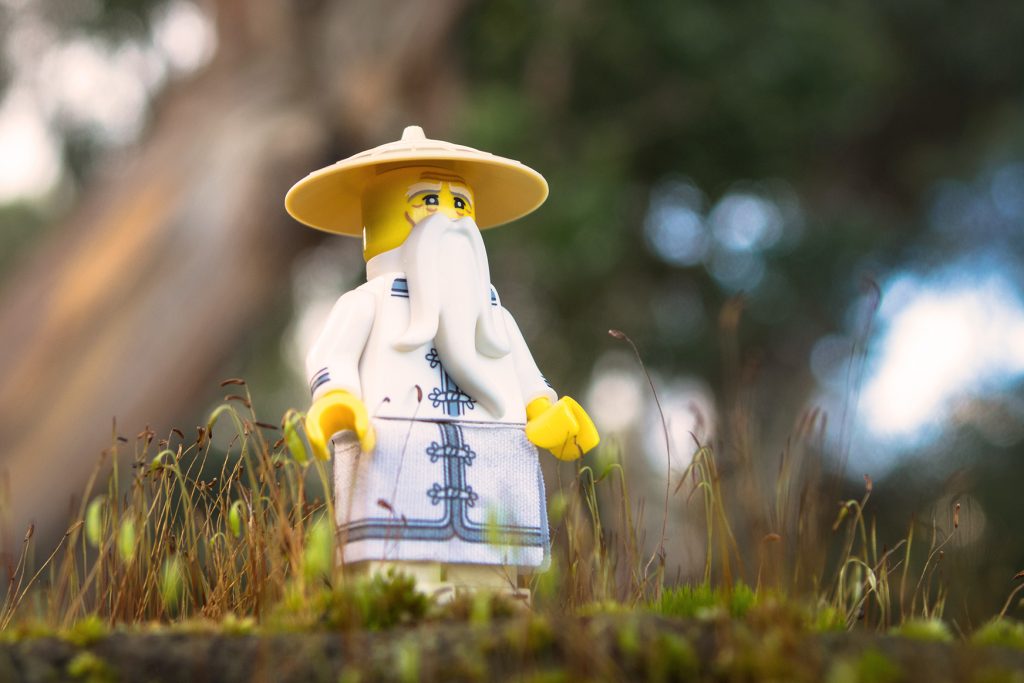 The addition of a ‘skirt’ to extend the printing of the torso and add ‘length to the top is a nice touch. His tan legs include sandal printing on the feet. 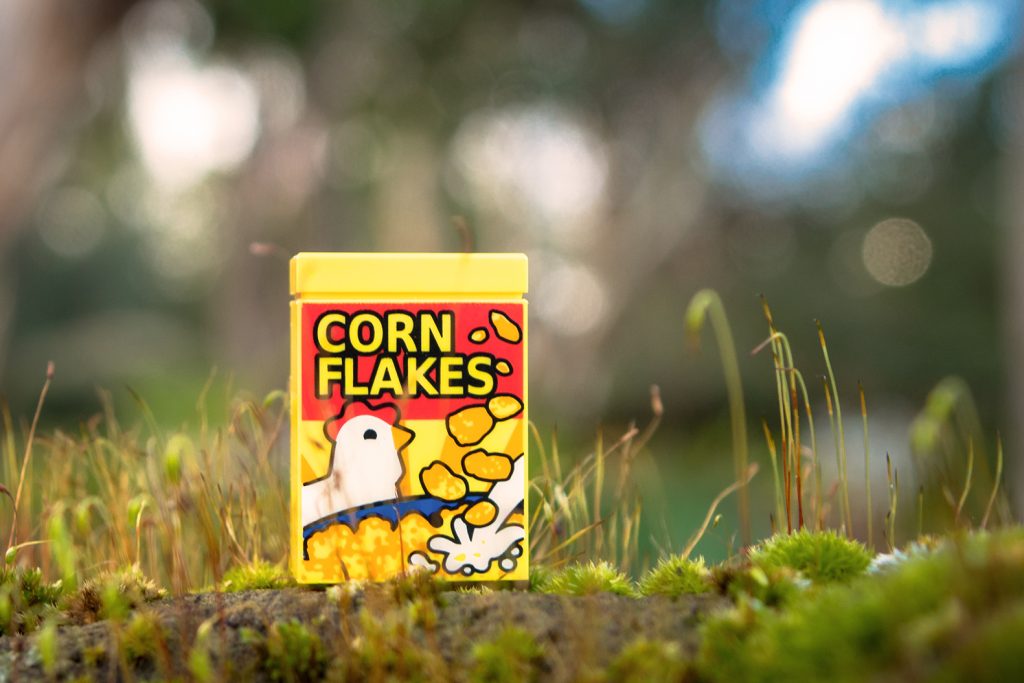 The Corn Flakes box is a great addition which no doubt will make its way into many LEGO photos.

Kai has some pretty standard Ninjago printing under his Kendo armour, which is mostly hidden. Under the Kendo helmet his angry face is scarred on both eyebrows, with one still sporting a Band-Aid, and that impossibly high messy hair. 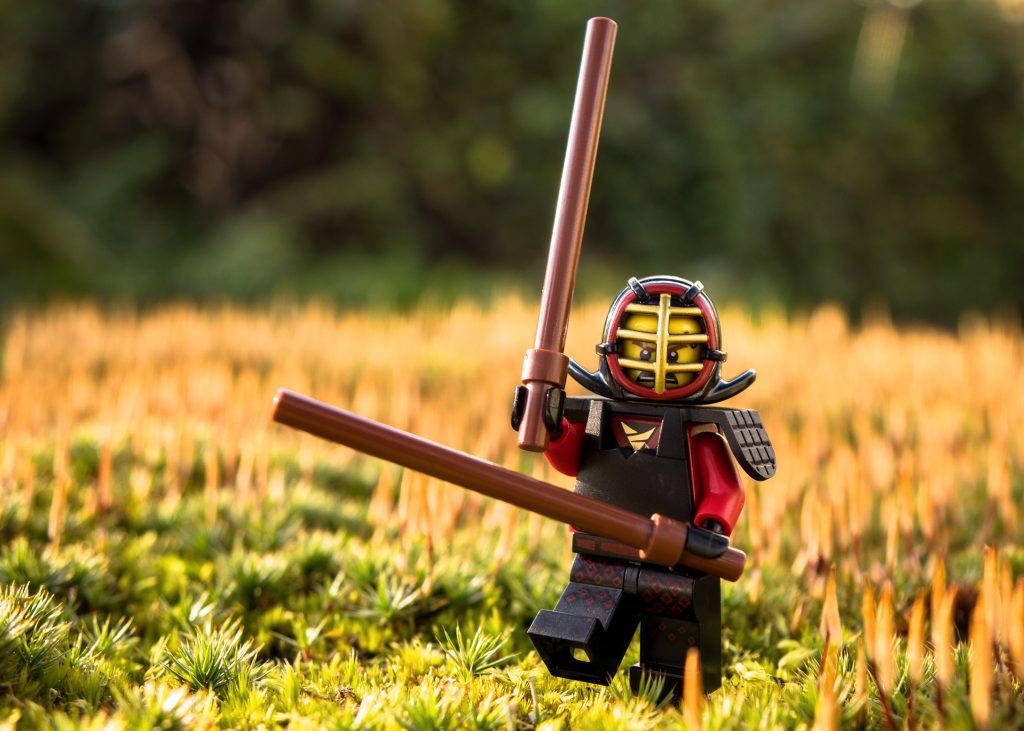 How does he squoosh all that hair under his Kendo helmet? 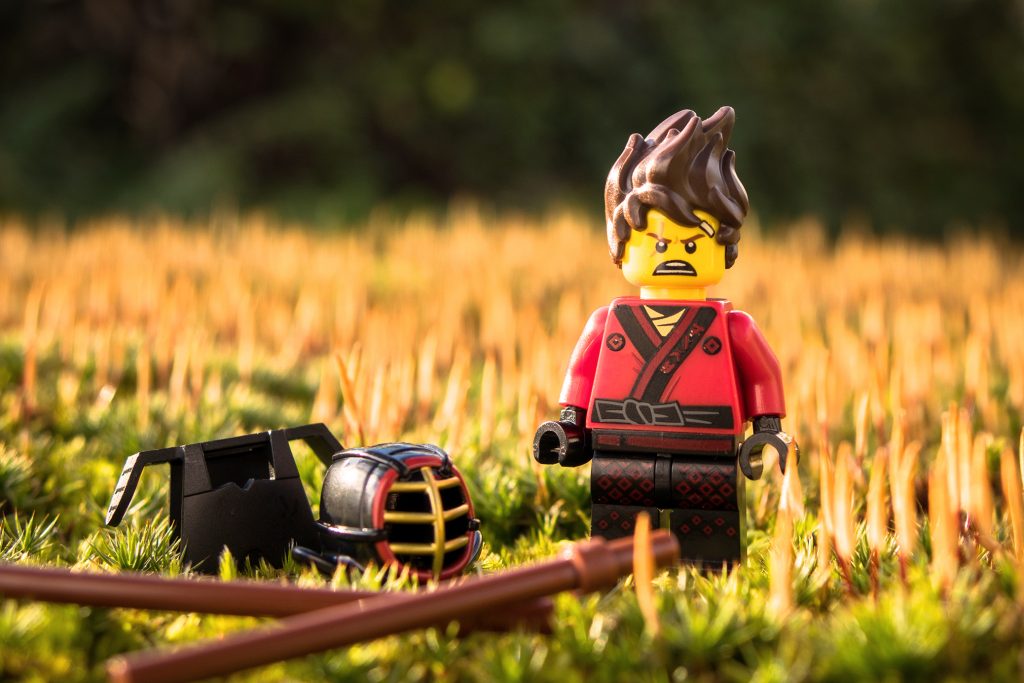 Zane comes with a printed backpack similar to the hiker in CMF series 16. A retro 8-bit aliens sweater vest tops his pleated white pants with black belt and black shoes. The sweater vest is so cool. I hope LEGO make these in my size, ready for Christmas! 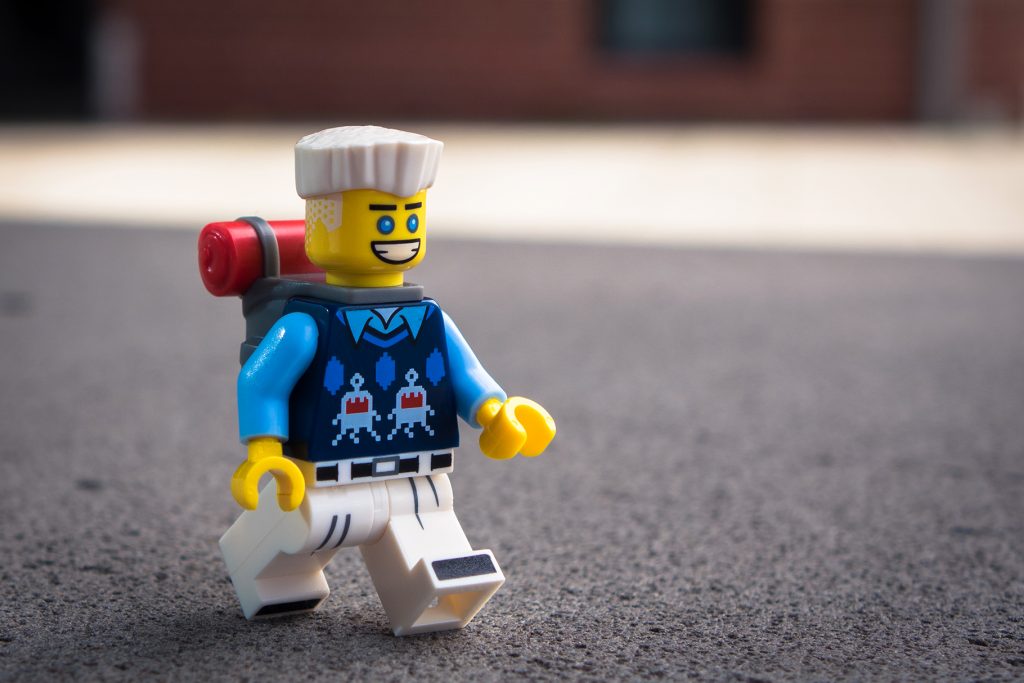 His flat top hairdo is buzzed down to at least a number one with the faded printing on his head. Finally, one of these guys has found a comb!

On first opening the bag, I thought Nya was a little dull. But I was wrong. 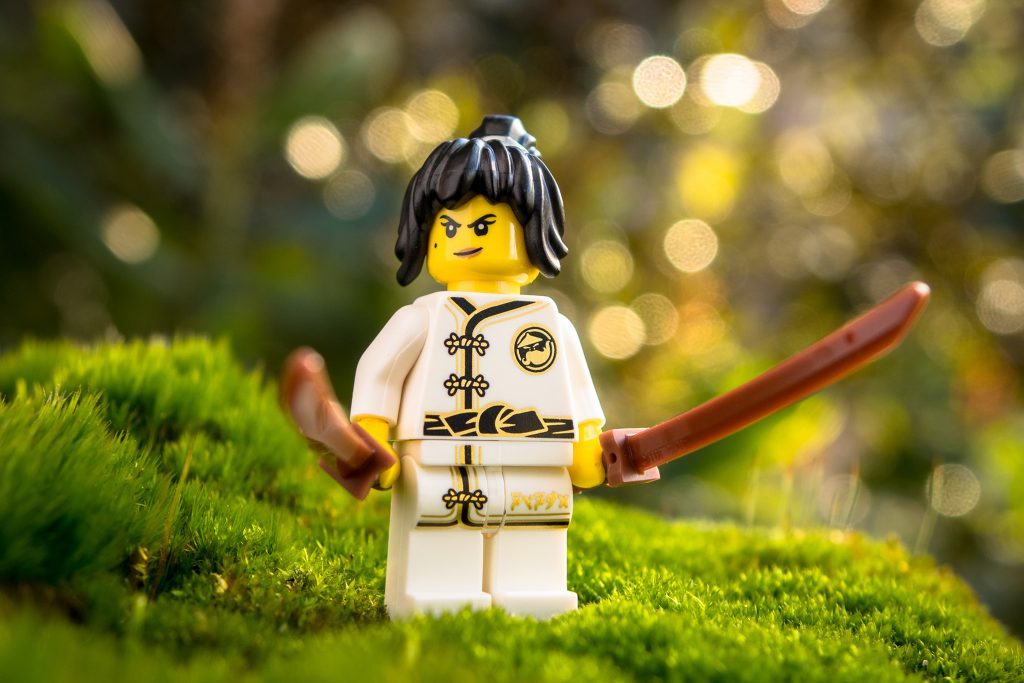 She’s the strong female character I’ve been craving. A determined look sits under her black hair tied up with a gold band. Her white ninja gi (uniform) has some wonderful black and gold details, including Mater Wu emblems emblazoned on the front and back. 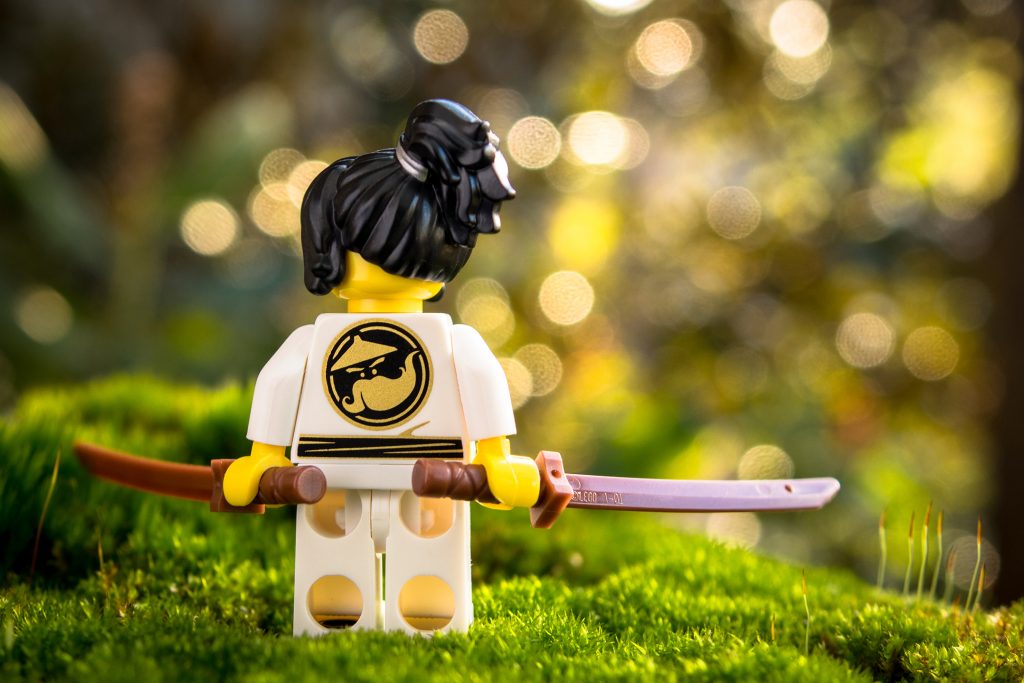 Brandishing two wooden swords, I wouldn’t mess with her.

Cole’s angry sneer and cropped black messy hair sit above a muscle top with what I can only assume is a Ninjago nod to ACDC with the four symbols parted by their iconic lightning bolt. 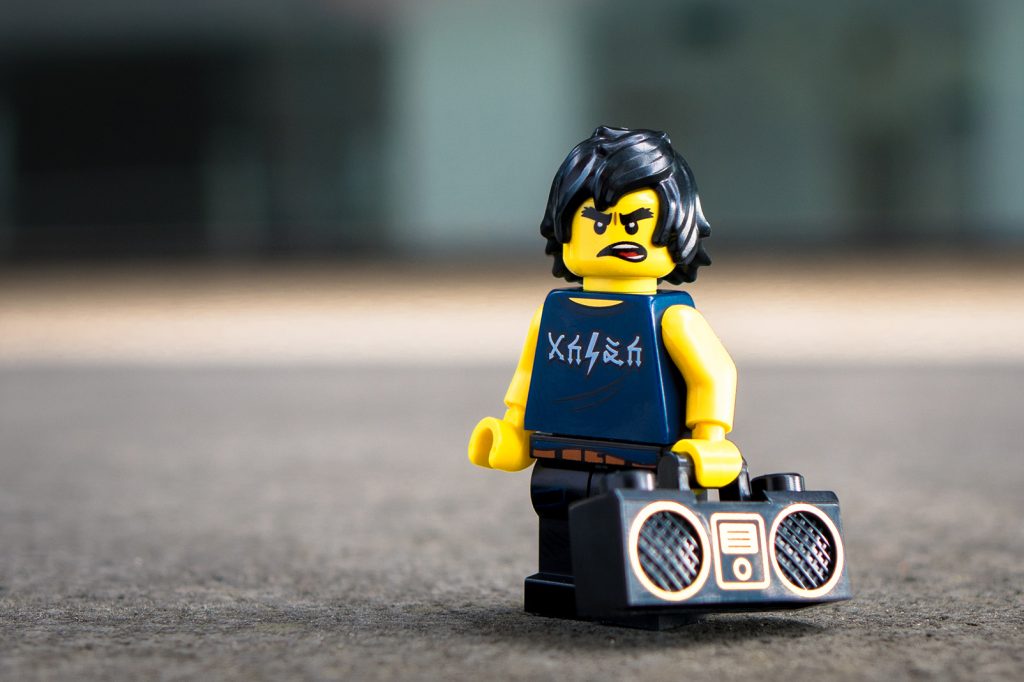 The back of this muscle top has “World Tour 1985” with a list of venues in white with “SOLD OUT” printed over it in red. 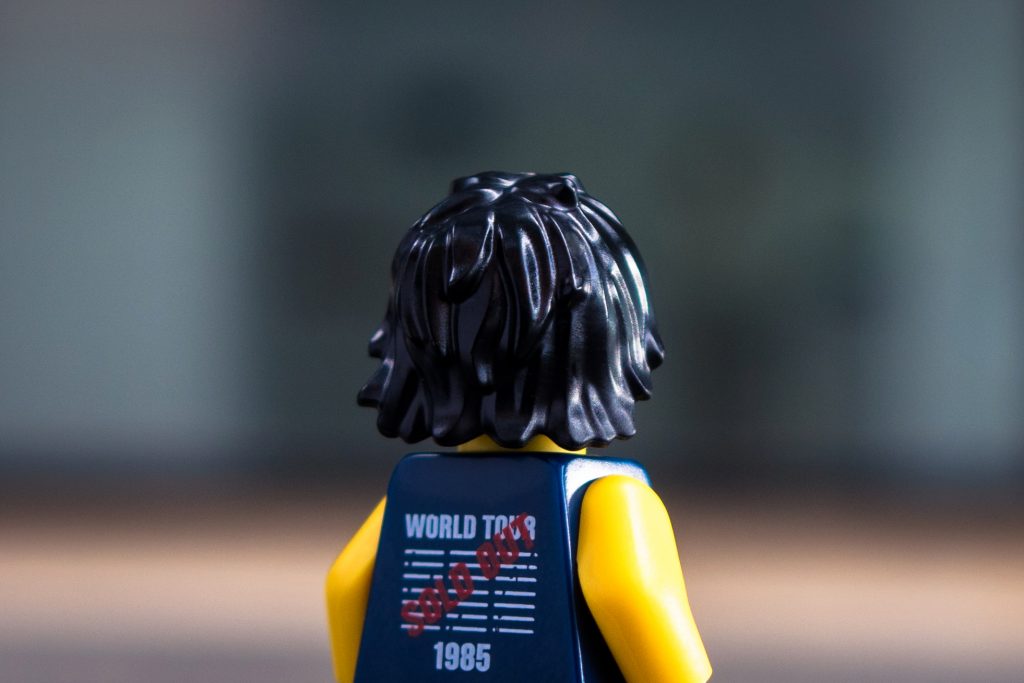 His ghetto blaster is obviously for blasting his favourite tunes from that sold out world tour.

With printed glasses that remind me of Robin’s moulded ones from the Batman Movie, it’s a nice tie in with the Batman logo on the t-shirt she wears under her lab coat. The lab coat is printed with a pen in her top pocket and the label “GIT”. The lab coat printing continues onto her legs with another two pockets. 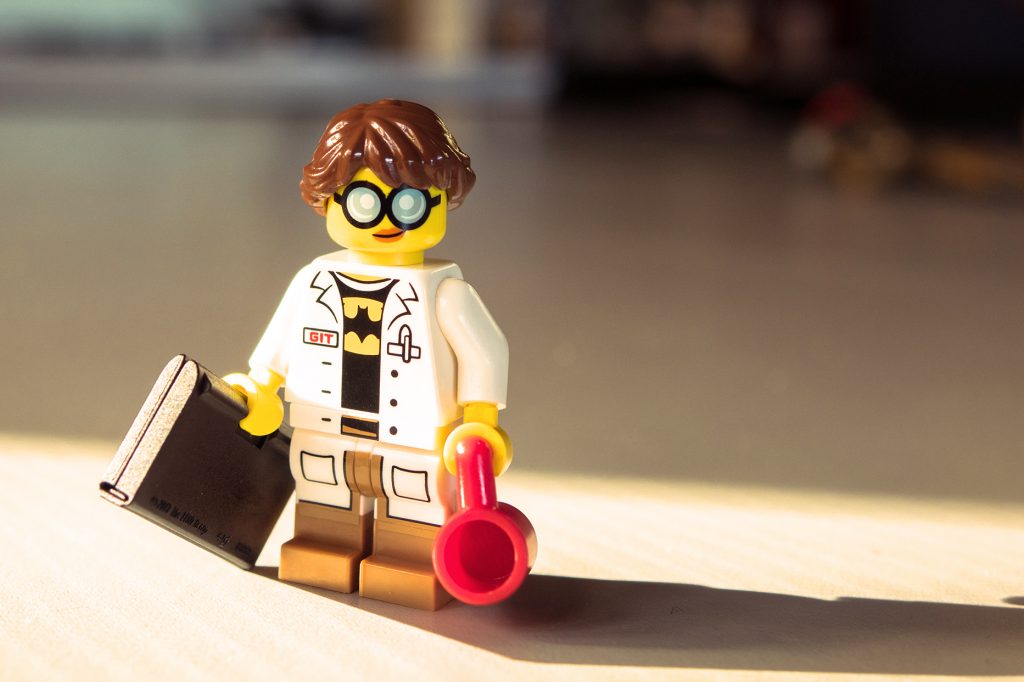 A nod to the Korean K-POP, she is pure pastel cuteness; from her pink and blue Harley Quinn hair, all the way to her heart printed green and blue shoes with pink laces. 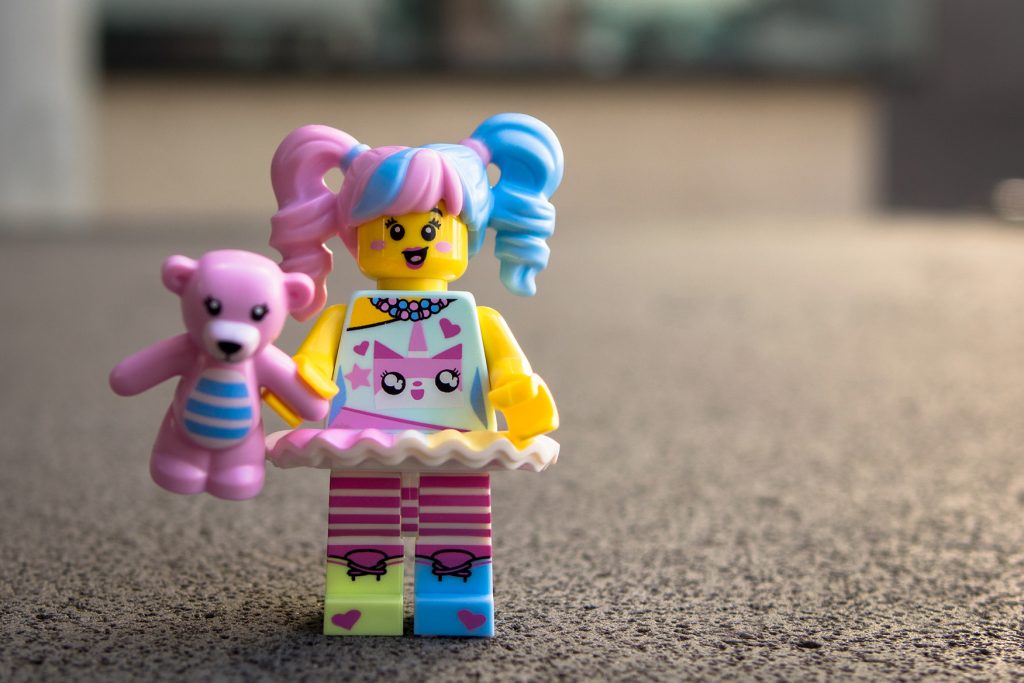 She wears lollypop pink and white striped tights are under her pink, green and yellow printed tutu. 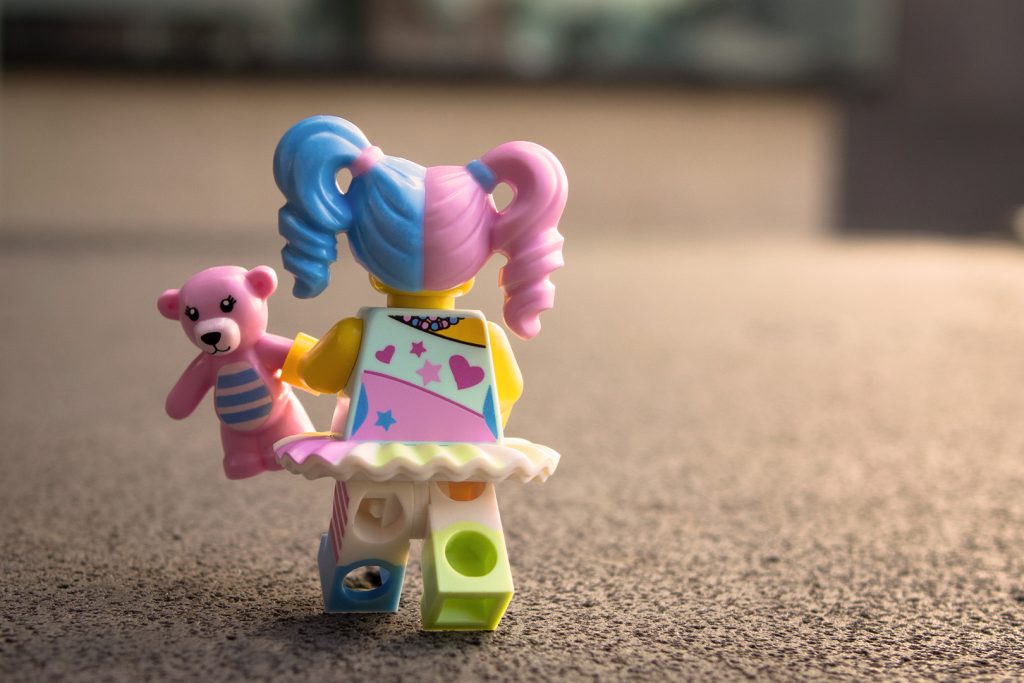 Her top is printed with Unikitty on the front and even more love hearts on the back. A pink teddy bear is added just in case you haven’t had enough cuteness.

What is it with Ninjago? Doesn’t anyone own a hairbrush? Jay’s messy hair sits atop a somewhat embarrassed look on his face. 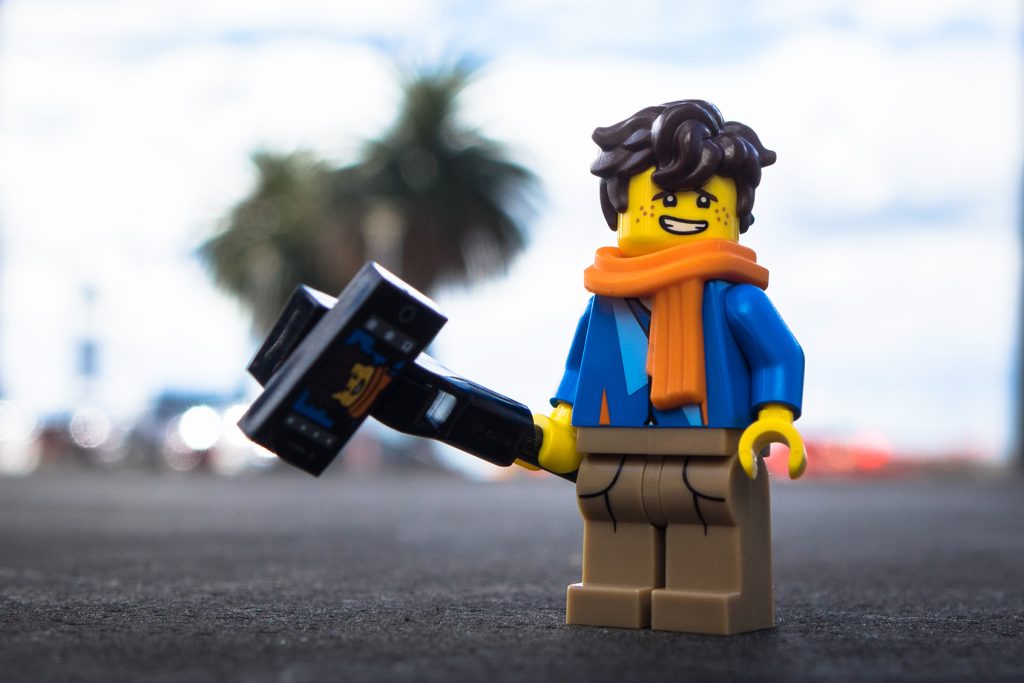 Maybe it’s because of the selfie-stick he’s wielding? 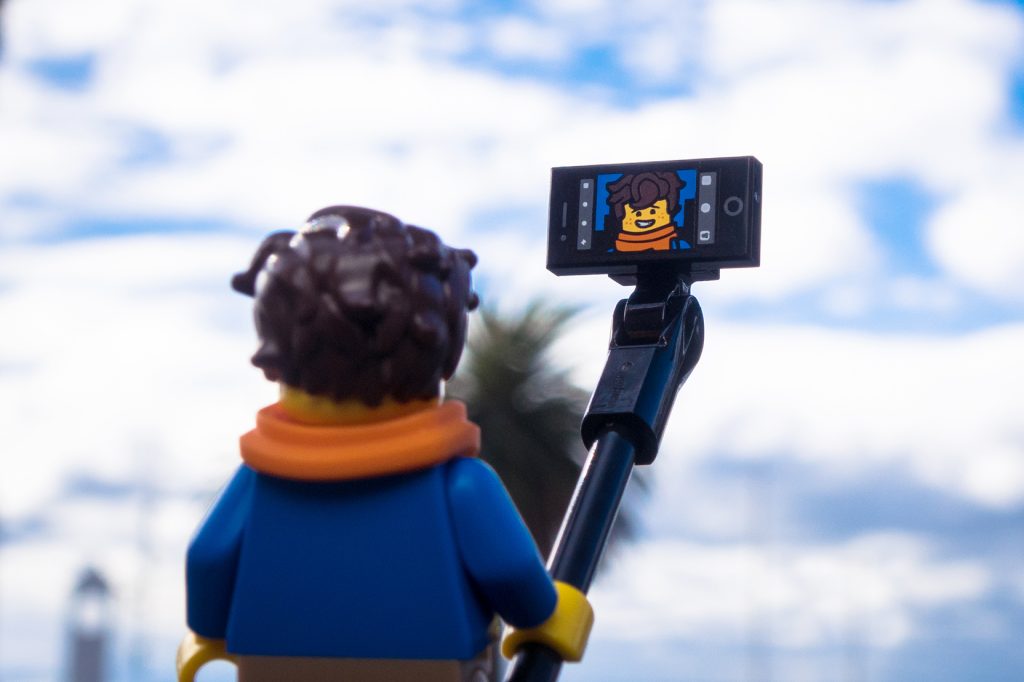 One thing’s for sure, he can’t be ashamed of that snazzy orange scarf he’s wearing! Hopefully we’ll see some more colour variations of these!

I really like this guy. His cheeky moustachioed smirking face is topped with a black and white printed headband similar to the series 16 scallywag pirate. The subtle prawn prints on this uniform are a cool touch. 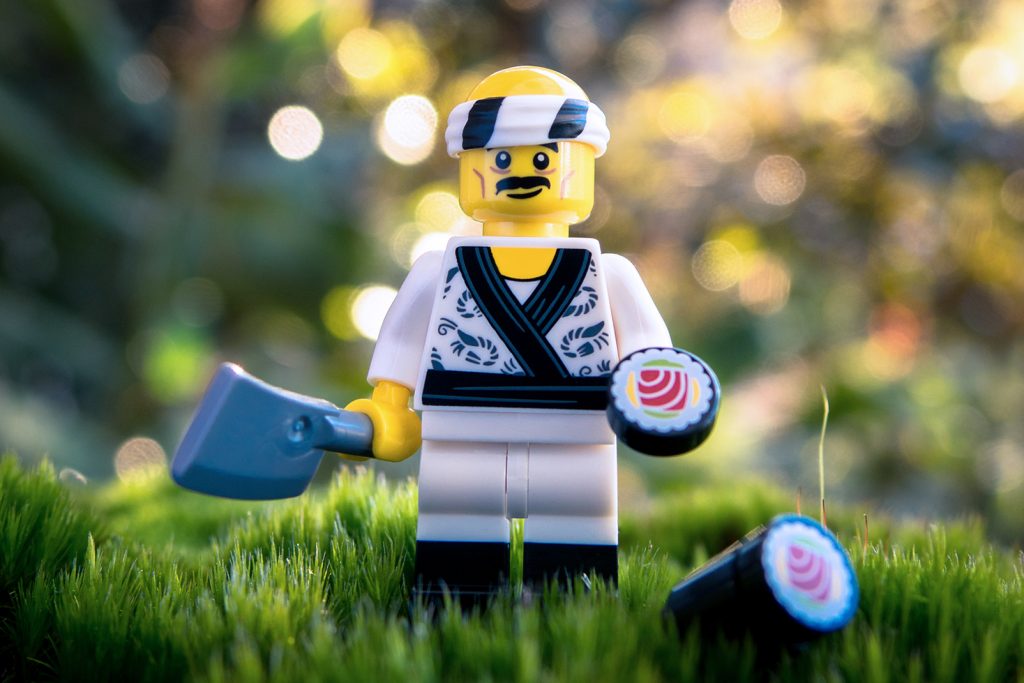 His trusty cleaver has sliced off a bite size piece from his expertly rolled sushi. I can only imagine what he’d make of the Shark Army? Something oishii no doubt!

I REALLY like this guy! It’s amazing what a different hair colour and headband can do. The series 7 hippy’s hair turned died black and his orange headband exchanged for red, becomes pure metal! His studded belt, chain, ripped jeans (or maybe they’re leggings?) and white high top boots are straight out of a late 80s film clip! 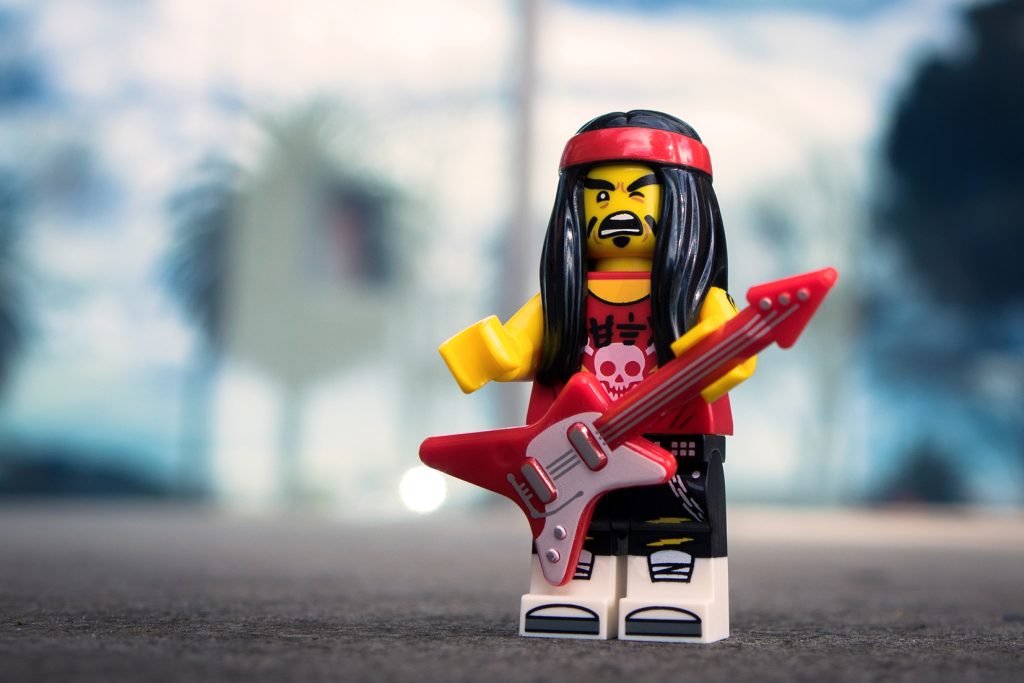 His red muscle top is printed with a white skull and crossbones and a black slogan. He’s got a black dragon tattoo and a black sweatband, undoubtedly for wiping the sweat of his brow after slaying another lengthy lead break! He’s the only two sided head print, one pretty neutral, and the other one absolute “rocking out” perfection!

“Lord Garmadon developed an extra set of arms in order to possess the Four Golden Weapons.” This, and who Misako was, is the only research I did for this review. It still means little to me, but gee, Lord Garmadon is a cool Minifigure! 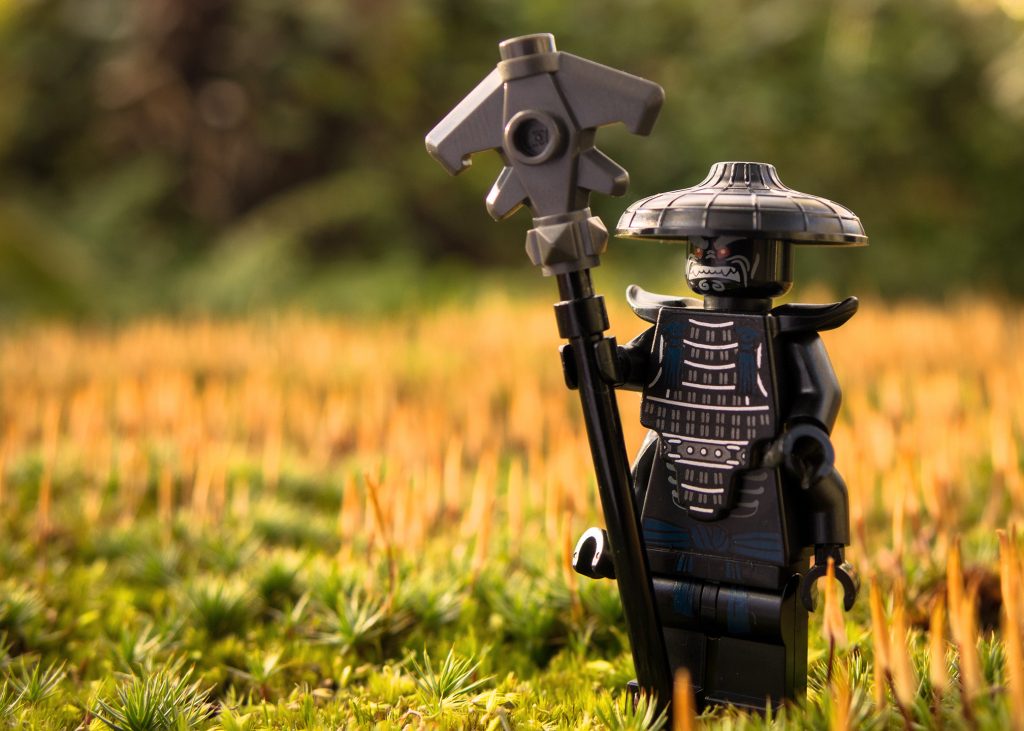 He looms over his enemies, dressed in typical bad guy black with printed armour. His sneering head print is reminiscent of Kabuki samurai makeup, which is cool!

I can only assume this is a reference to the movie and it will shed more light on this groovy looking version of Garmadon? 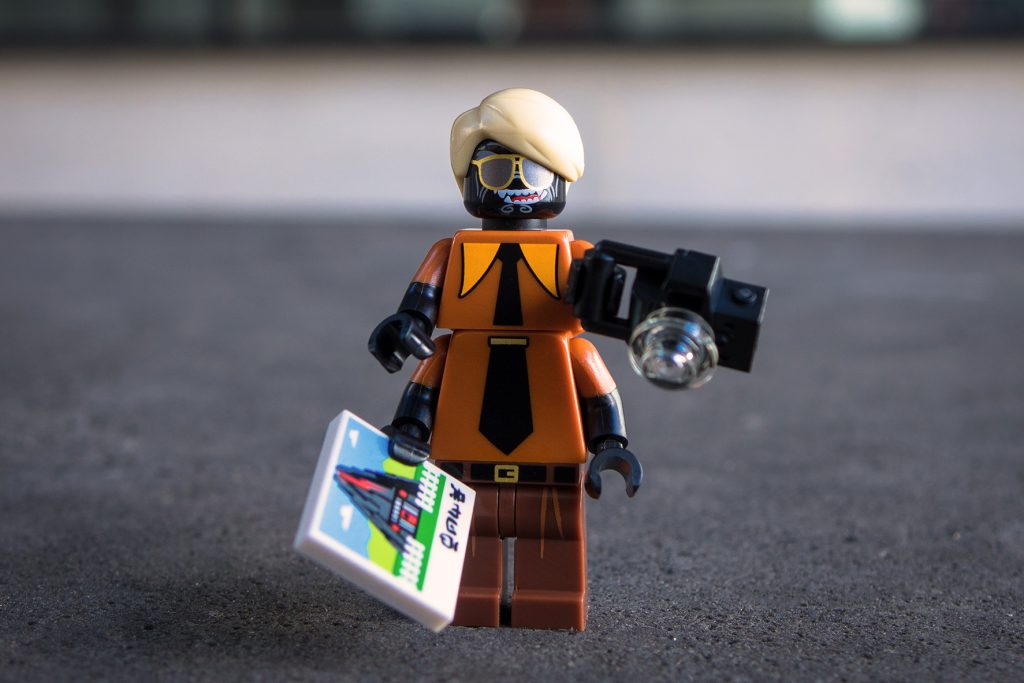 His brown on brown attire with its collars that threaten take flight in a strong wind, obscenely wide tie and aviator shades are straight out of the 70s. The printed tile is obviously a reference to his “Underworld” kingdom, but in happier times with the white picket fence.

Gone is Garmadon’s sneer, replaced with a grin. And why wouldn’t he grin? He’s got his comfy volcano patented pyjamas on, and a bowl and spoon for his late night snack. 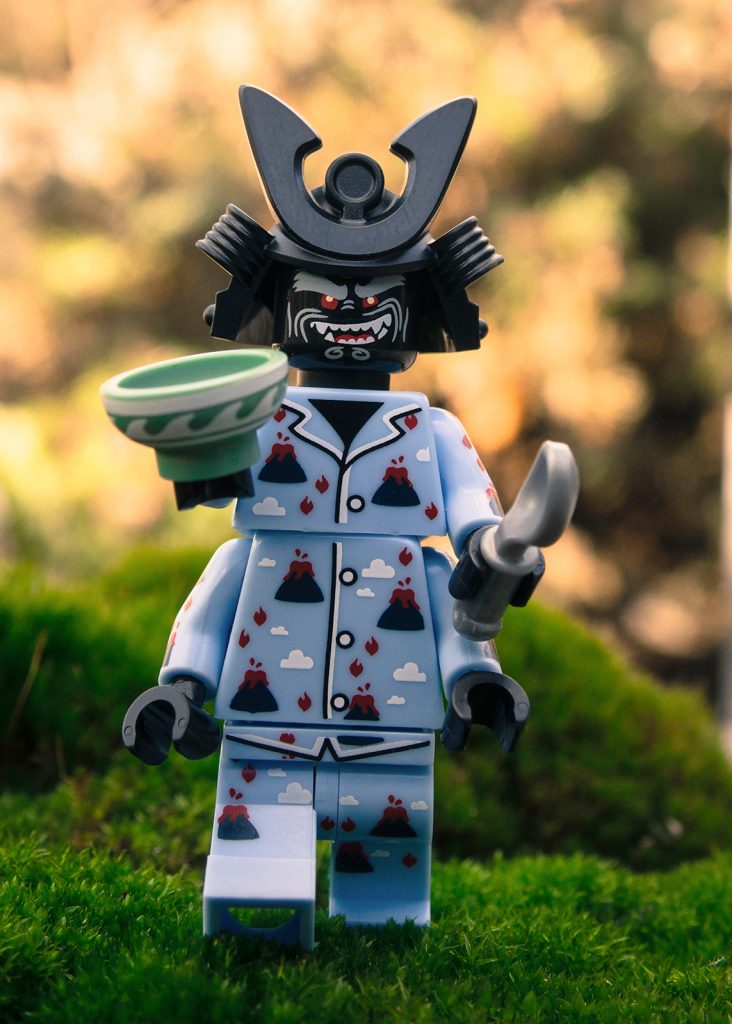 I don’t know how comfortable that headpiece is for his slumber party, but I still want to be invited!

The General’s worried look might because she’s worried the N-POP girl is eyeing off her pink milkshake? 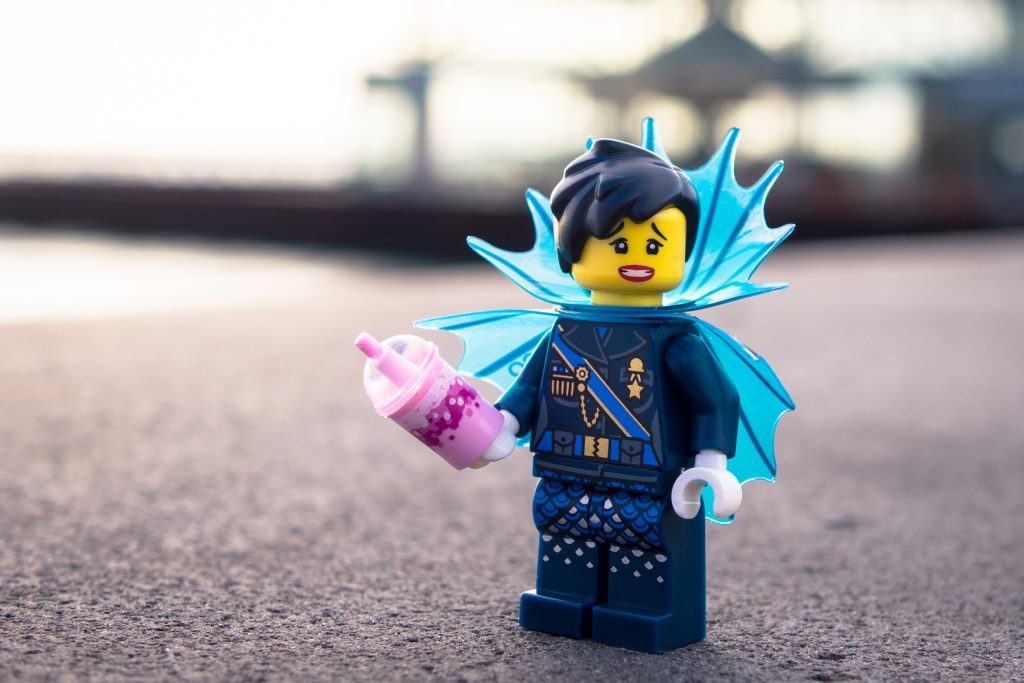 Or perhaps it’s a look of concern that her scaly double cape is about to be caught in the wind? Or perhaps it’s the strain of having to wear all her accolades on her uniform? I don’t know! I do know that the fish scale printing on her legs is cool though!

This Great White has copped a battering (no pun intended). His dark blue uniform is fantastically adorned with gold medals and chains, many with underwater motifs, but the singed marks on his legs, torso and arm show signs of battle. The black shark headpiece also bores some scolded battle scars. 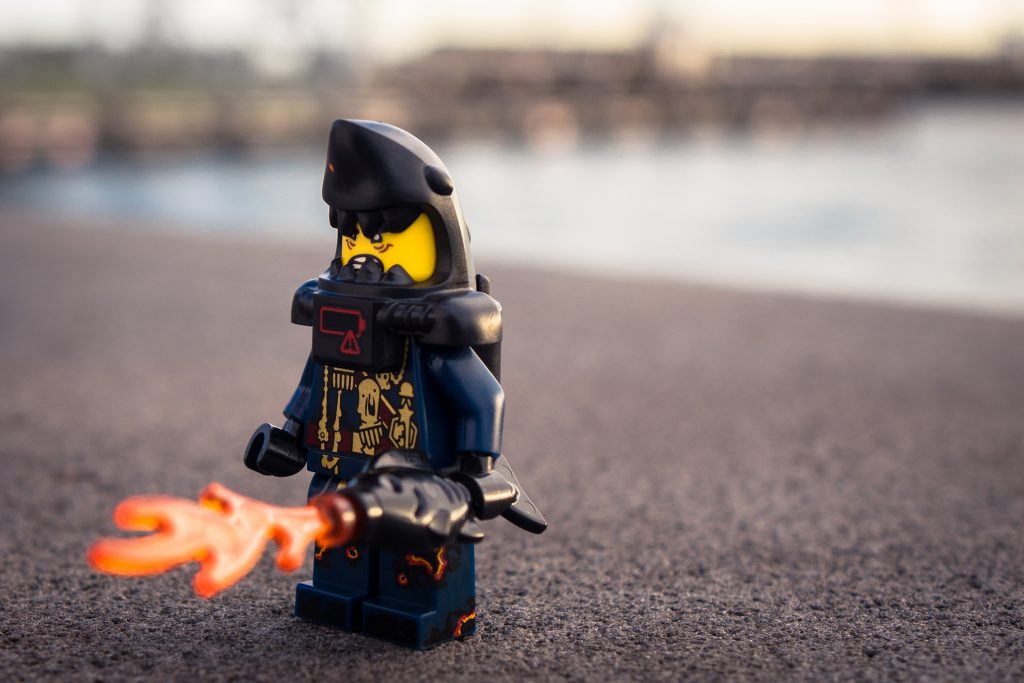 And his scuba tank’s battery life is critically low. No wonder he looks so grumpy! But how can he be grumpy, he’s brandishing a flaming new black fish!

The Anglerfish headpiece is super cool with its hypnotic eyes and dangling lure. Underneath, there is scarred female Shark Army member with lipstick and eye shadow printing. 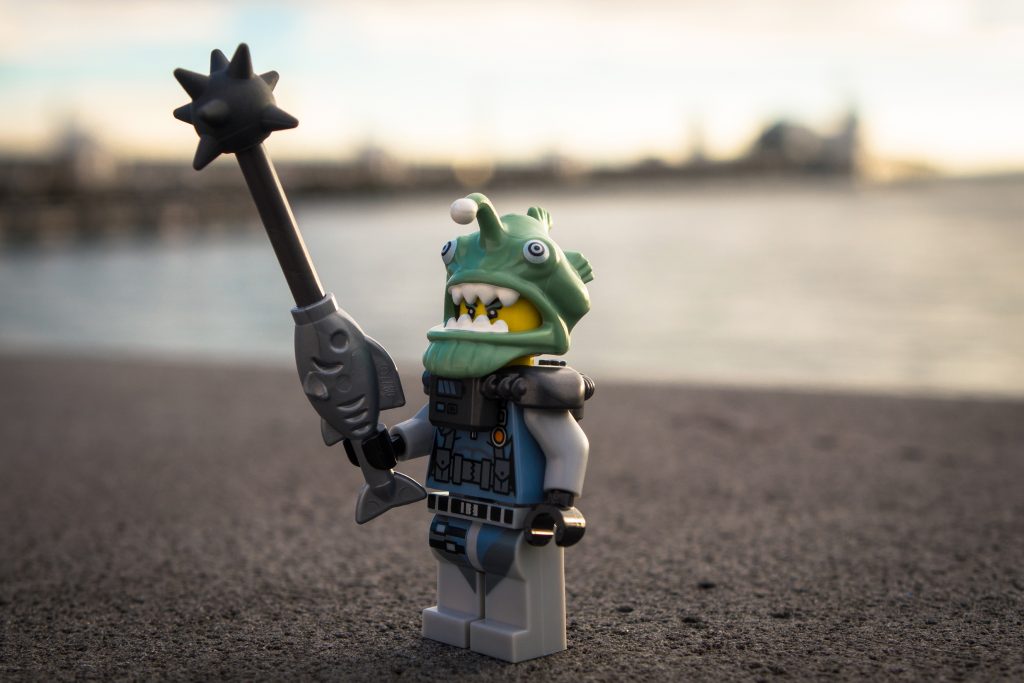 A single scuba tank body wear also the printed battery life on the front it. The fishy mace is a cool little weapon.

Another scarred head sits underneath the wonderful octopus headpiece. Man these Shark Army guys have some war wounds! Although, I can’t help but wonder where the eighth octopus leg went. There’s only seven? 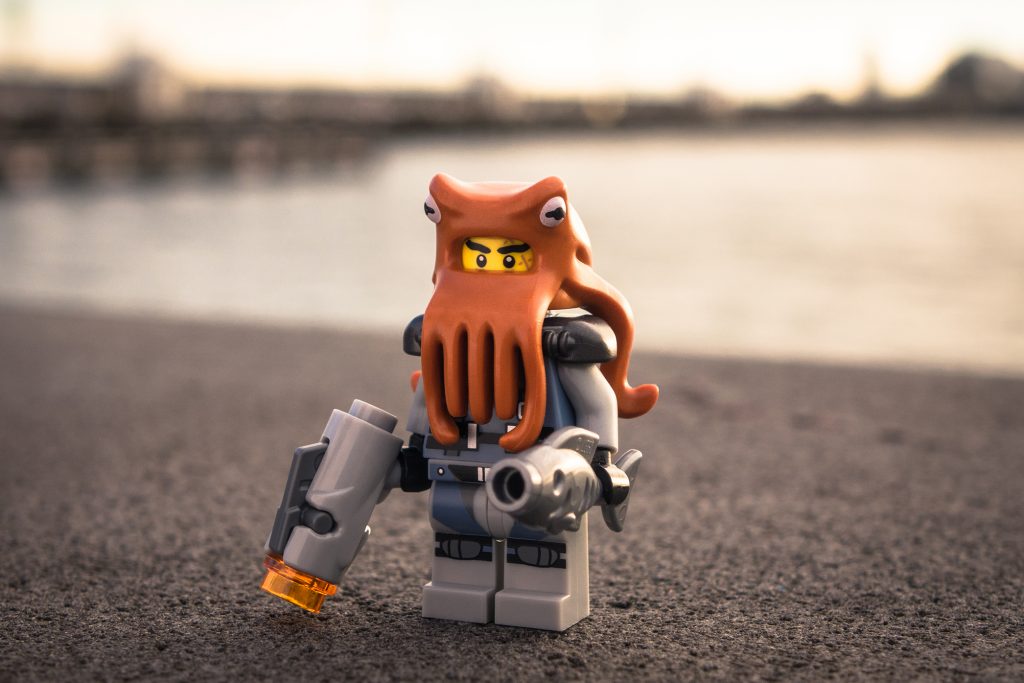 Like the Angler, the torso is standard and the scuba tank’s battery life is OK. He’s armed with a silver fish and a shooter (the first of these in a CMF series?).

As someone who has never really been into Ninjago, I was dubious about a Collectible Minifigure Series I didn’t really know about. I was wrong. Even to those like me that know little about Ninjago, this series offers so much. There isn’t one Minifigure in the series that disappoints.

Thanks to our friends at LEGO, especially Kim, for giving us the opportunity to review this wonderful series of The Ninjago Movie Collectable Minifigures. The series is due for official release on August the 1st.

Stay tuned for details of the upcoming giveaway where you could win a complete set of 20 Ninjago Movie Collectable Minifigures!

Who is your favourite from this upcoming series? What about accessories? What has caught your eye?