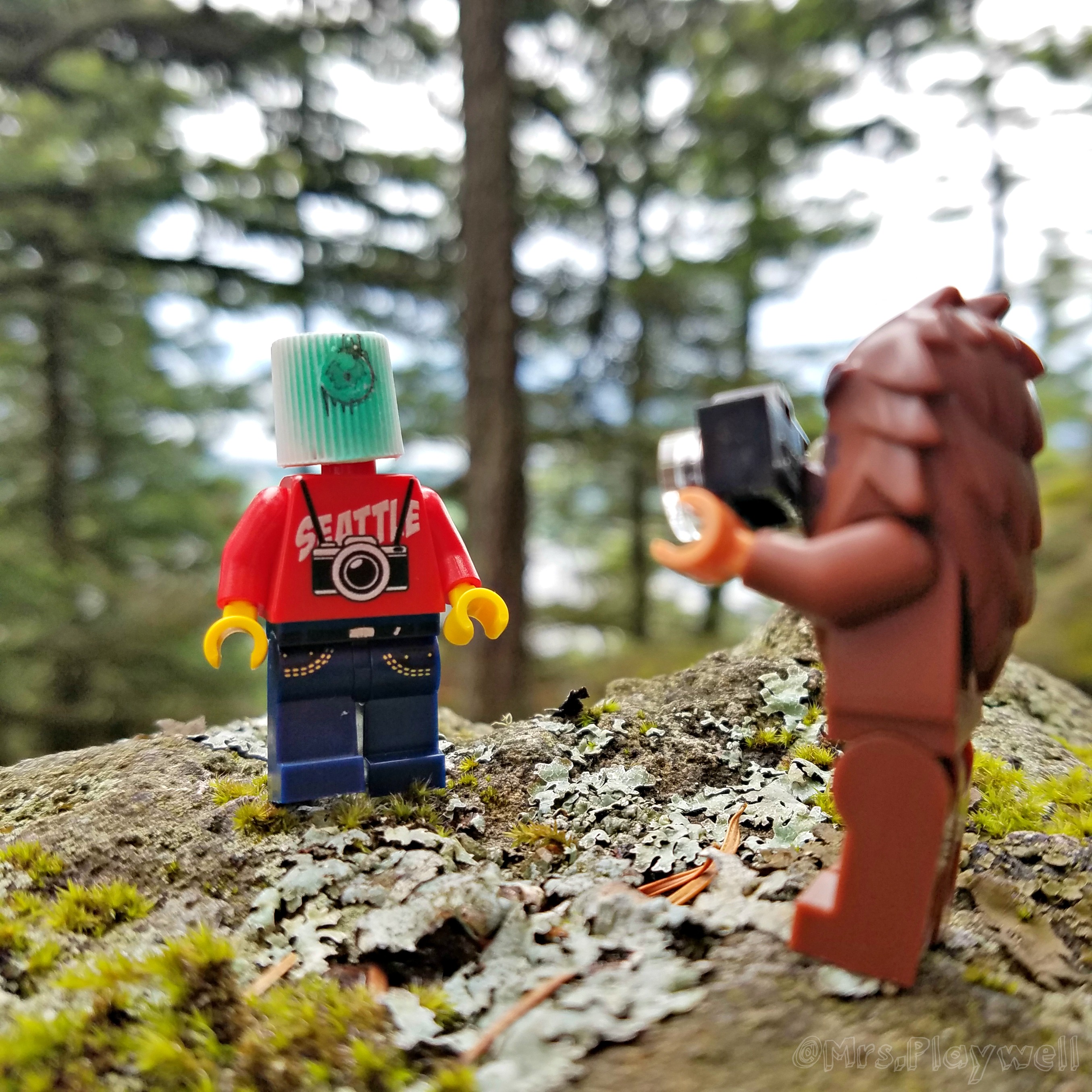 An hour of play discovers more than a year of conversation.

As I returned to the “real world” the Tuesday following the SiP Seattle Toy Photographers Meet-up, I inevitably had colleagues and friends ask about where and how I’d spent my long weekend away. Upon telling most of these colleagues and friends about all I had been up to those four days, their first question was inevitably, “A What Photographers Meet-up?” How do you even begin to explain the incredible experience of a toy photographers meet-up to someone whose mind has never so much as crossed paths with the idea that there are artists, like myself and my fellow toy photographer attendees, who (privately, for the most part) take beautiful and sometimes painstakingly-created photographs of their toys?!

In most cases, I simply pointed to my Lego keychain or Lego desk adornments and said, “Remember how I told you that I take photographs of my Lego minifigures? Well it turns out I’m not the only person who decided it was fun. Actually, there’s a whole community of us out there, and occasionally we look up from our phones and cameras long enough to get together and meet-up with each other to share our strange love for combining toys and photography.”

However, (thankfully for me, the writer) since you (the reader) are currently reading a post on a blog almost exclusively about toy photography, there is likely no need for me to explain the ‘strange’ (to be read as ‘super fun, exciting, and addictive’) nature of toy photography. So since we’re all ‘in-the-know’ around here, I’ll save you from my already long-winded nature and get to what I’d really like to share. The stuff I wish I could share with my friends and colleagues (if they weren’t too busy trying to wrap their minds around grown adults taking pictures of their own 4cm tall look-alikes… “You call it a what? A sigfig?”).

But first, a few things I feel I should probably tell you about myself (since you more than likely aren’t one of said friends of colleagues).

To start off, I’m quite new to the toy photography community, and almost as new to any type of photography-based social media platform. After creating my first Instagram account of random ‘my life’ photos, (an AFOL for many years prior) it didn’t take me long to discover the entire ‘world’ of Lego, and other toy, photographers that were out there. As soon as my husband sparked the idea for my handle, I created my @Mrs.Playwell account. This was just last November (2015).

Thanks to some perspective I recently gained while attending the SiP Seattle Toy Photographers Meet-Up, and getting the chance to meet so many photographers with such a wide range of experience, I can now recognize that I’ve been pretty fortunate to have a bit of a whirlwind introduction into this awesome community of ours. This was mostly thanks to a couple of especially awesome #womenintoyphotography from my own city of Portland, OR (you two know who you are,) who reached out and bravely asked the Instagram equivalent of “Do you want to come out and play with with us?” and forged a new photographic friendship, but who also introduced me to Shelly on that very first ‘play date’. Keep in mind here, that this was merely two short months after I had first googled all the “biggest names in Lego Photography” and uncovered last fall’s exhibition in the Bryan Ohno Gallery, and the SiPblog. (Which I’m now being asked to contribute to… just four short months later… Wow! I told you it’s been a whirlwind.)

Next, you should know that I’m still working on considering myself a “real” photographer. This has nothing to do with my subject matter (Lego/toys) and everything to do with my camera (my phone). Yes… I only shoot photographs with my phone. While I would definitely say that both my previous phone (an S5) and my current phone (S7) have pretty superb cameras for a cell phone, there will always be something about it that just seems too easy for me to consider myself a “real” photographer… but I’m getting there.

Another fantastic bit of perspective I gained while attending the meet-up, is that being a photographer is definitely not all about the gear. While it may be fun to ‘talk shop’ with other photographers, and sometimes I can feel a little clueless during these more technical conversations with my new friends, what really matters to anyone else but me are the photographs I capture and what they say about the world we share, not the gear I use to capture them. And, if anything, some of the “real” photographers are often jealous of the time/energy I get to save not having to upload everything to a full-sized computer before being able to edit and post.

However, the greatest new perspectives I have gained from attending the meet-up in Seattle were not necessarily about myself or my photography, but rather about this awesome community that I have so very gratefully jumped head-first into. I gained perspective about what really makes our community a “real” community.

In the era of personal technology that we find ourselves living in today, it can be so very easy to get caught up trying to keep up. To keep up with the emails, the comments and messages, the timelines and algorithmic feeds, the blogs and the podcasts. There are so many new ways to help us ‘keep up’ with our families, loved ones, and communities that sometimes it’s all we can do to just ‘keep up’ with it all. But behind each of those photographs we flip through when we wake up in the morning, while we’re waiting at the bus stop or ‘taking a ten’, and then again during the time while we’re letting dinner digest so we have more room for dessert, there’s a “real life” human taking that photograph. I know this is not shocking news to any of you, (most likely) you are one of those “real life” humans, but I think sometimes the filter of two pixelated screens, and at least a couple cellular towers or wireless routers, between us can make this simple fact easy to forget.

At the Seattle meet-up, I had the pleasure to meet around 24 of the 30+ “real life” humans that were in attendance at different points throughout the weekend. We played together in the sunshine and in the rain. We played together in Shelly’s yard and in a giant fort. We played at the top of Mt. Erie and the bottom of the Space Needle. And while I enjoyed discovering the more human side of each and every one of these photographers, there were a few (or quite a few… this was a lot more than just ‘an hour of play’ after all) “real life” discoveries about my new playmates that I feel noteworthy of sharing.

I learned that @krash_override (creator of some unbelievably cool #krashes_kustoms figures) is quite possibly the most generous man I have ever met, and that his wife @lizzybelle9 is no less generous herself. I was happy to find that @wikitoybox is as absolutely hilarious as you would hope the creator of #mylilshietz would be! But that she’s somehow that much funnier any time @papajov is around! @dinoczars is willing and able to encourage almost every fellow toy photographer, with almost any preferred type of toy, to borrow one of his many super photogenic dinos and join the #toydinosquad. He’ll even give you a little refresher course about their taxonomy and respective prehistoric eras while he’s at it! @travelbricks will find the most precarious, yet completely ingenious, little nooks and crannies to shoot in. Straddled over a log on the side of a cliff, sheltered from the rain under the barrel of a massive World War-era mortar gun, or wedged upside down in a pile of driftwood for more than ten minutes… she always got her shot! (Hmmm… maybe it’s all those hours she spends in a cramped airplane cabin that gives her such vision for tight and awkward spaces?) I found out that @thereeljames23 and I share more in common than just our shared love for Squarefoot and living in Portland, and that @tronsoda is one of the most quietly creative and inventive people I have had the chance to meet in a very long time. I discovered that @wiiman has a curiosity for some figures that are far more, shall we say, shapely and robust than any Lego minifigure (even Ursula or the Series 15 Queen), and that I don’t think @carteraug21 has a selfish bone in her entire body. I realized that @coney_dogg is a really great person for me to talk to when I’m not feeling especially inspired. She always seems to have some interesting observation or witty comment that will give me a fresh perspective and the encouragement I need to try something new, or try again on a shot that continues to escape me. I was reminded again and again that any one of the many artists in attendance were always more than happy to lend their favorite figure, or their favorite hand (or lung, in @papajov’s case), to help a fellow photographer pull off a particular shot they had envisioned. I also witnessed just how loyal @brickandmordor is to not just her word, but to her friends and to our community. And I learned that I will never refuse if @xxsjc ever asks if I would mind if she gives me a suggestion about the photo I am currently trying (often quite unskillfully) to capture.

Oh, and also I also learned, that no matter how good you think your own favorite toy photography “war story” might be. @fathersfigures, @intangibledandy, or @bear__trap has probably got one better!

While our community may exist primarily through the mediation of social networking platforms, our handles and hashtags, blogs such as SiP, and other virtual realms, it is still the real people behind it all that create what makes a community. It is their most human qualities, their creativity, curiosity, ingenuity, humor, generosity, loyalty, encouragement, cooperation and camaraderie that fosters our community and our connections.

It is these humans, these incredible people behind the photographs and the toys, that are the top 30+ reasons I would encourage each and every one of you to attend the next SiP meet-up if you can. And as Shelly told me last January, “You can! Just put it on your calendar now and ask for the time off work. You won’t regret it.” She makes it sound so simple, huh? But really, if the “real world” just won’t allow you the time or expense to attend an ‘official’ meet-up, then please don’t be afraid to search out to another toy photographer near you and see if they might want to photo safari with you at your favorite local park or landmark. There may be two pixelated screens, and at least a couple cellular towers or wireless routers between you, but if you let those stand in your way then you may never know all the amazing things you could learn about that person if you just asked them if they might have an hour or two to play.

– @Mrs.Playwell (aka Jenelle… in the “real world”)