Our world in my photographs

I have read Shelly’s excellent post “Violence in Toy Photography” several times and thought it through, and I agree. I don’t want to see more violence, toys splattering in blood, or decapitating of heads. I stand in Shelly’s corner when she says that

We have the power to change our world, lets start acting like it. Let’s start posting photos that reflect the world we want, not the one we have.

Yes, we have the power to change the world, but …… this is my confession I don’t know how to make pictures that capture the world I would like to see, or the world I would like to create. I’m a photographer of the grey areas and often my pictures reflect the dark side of human life. My standpoint is that I lack the ability to make fiction; I can only make pictures of things I know. And in lack of other tools I use toys and make still life photos.

I usually do photographs about ordinary life and part of ordinary life is that bad things happen. I wish they didn’t, but they do. For me that is drama enough. With my photography I explore hard situations that I don’t like, but I know are there. In the picture “Ophelia”, it’s all about death.  At first you may not have seen that it is Ophelia because we know her as Hamlet‘s fiancé and in my version she is dressed up as an imperial Stormtrooper, but it’s named Ophelia. The origin of the picture is my need to explore the feelings of betrayal and suicide which I feel accompanies Ophelia’s suicide. This picture was also my way of handling the picture of Alan, the child who drowned on his way to Europe; the picture of his dead body was spread all over the internet. Maybe you didn’t get that when you saw the picture and that is ok, but please look at it again and you may see the picture of a woman who has lost her soul because her lover has gone mad and doesn’t want her anymore. Or maybe you will see a child that has drowned when he fled from the horrors of war and didn’t finish his journey to a new life of peace. I would say that I’m most known for my photographs with “the father and the son” and their ordinary life all in the shadow of a war. And as you also may know I come back to them all the time. Touching themes like parenting, the love of a child, growing up, role modeling, etc.; these themes of  “ordinary life” aren’t enough for me. The theme I come back to again and again is who is “evil” and who is “good”? My belief is simple, we can all be on the evil side and how we separate the good from evil is mostly a question of context. The lego soldier (usually known as a Stormtroopers) has the occupation to kill people for those in charge; the troopers do it for money not for the cause. But even if these soldiers are fighting for the “evil side in a war”, they may have loved ones, maybe children and with that an ordinary life. In my series with the father and the son I want you to look at good and bad because it’s never easy under the surface; I want to show there is a more complex picture of the life of the soldier. During the days when I believe the most in my pictures I think you will see that many of the men that fought for the German army during the second world war were ordinary men too, many of them with children, who they loved the same way I do, and they had a normal life even though they the next day they went out and murdered their enemies.

In my photographic world, pain and agony is a common theme. I don’t know if you have seen it, but if you haven’t you must take a closer look.

Maybe you saw it in the picture of Medea? You may have seen cat woman, but I see Medea and her pain. Do you see that? When I look at that picture I only see Medea’s misery and how she has revenged Jason’s betray. How she has murdered her own children and maybe there is regret in her hug of Teddy, maybe not. But with the teddy bear in her arms she has something to hold on to. In my pictures the toys are my way of dealing with difficult issues, like a mother that kills her children or a father that has to kill other children’s fathers, or a woman that can’t live when her lover denies her, or a child that drowns as part of his parents need to try to secure their children’s safe future. I don’t just take pictures of Cat Woman or Star Wars, I take pictures of ordinary life and I try to find a way to deal with the darkness in it. but the apparent glorification of some extremely despicable characters that dominate our pop culture world. Who hasn’t seen a gloriously beautiful photo of The Joker or Darth Vader? I know it seems like an insignificant point, but I can’t help but think that every photo that glorifies these characters brings them, and their actions, a little closer to an acceptable norm.”

I can’t agree more, but on the other hand all I see when I look at my lego version of the Darth Vader is a person who needs love and warmth and maybe he will get that through my teddy and when I give him teddy it’s because I hope it will ease the darkness. In that figurine I also see a lonely person and when I see a person in agony, I want to help in a way that I can.

But The Darkness that comes with Darth makes him more complex and with it he carries a history and I try to use that as well. In some pictures I use him as a symbol of some of the leaders we have all have heard about. He can become a warlord that deceives children to join his cause by tricking them to become soldiers. Maybe you see the Star Wars saga; I don’t because I don’t know it well enough. But I see a story about our world where children get robbed of their childhood through war. Do you want some candy?

I tell stories with toys. Toys that I borrow from modern fiction and through my pictures I try to use them to explore myth and ordinary life and there is a dark side very, very close in many pictures. I know that Shelly isn’t talking about my photographs, or at least I hope she isn’t, but there is a fine line. When violence is part of something we need to explore and show, we have to be aware of that. Sometimes I walk on that thin line and I think I’m well aware of it, but I do it because I can only make pictures that reflect the world I live in. I make pictures for adults so we can change the world we live in. But I also make pictures for me so I can deal with the dark side of our world. I use toys because through them can I stage and understand my world.

Why do you make pictures? And what themes do you come back to?

Some of my “father and son” pictures. 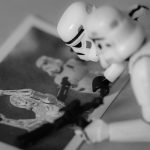 is this your profession? 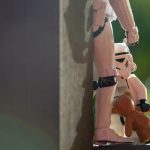 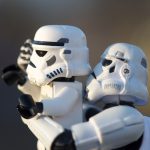 Look there is the new year 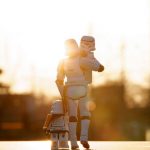