Eyes without a face

I was once asked “What is so special about Stormtroopers? Why are you using them so often?..” I had literally more than a hundred answers for that one question, all related to their signature presence in Star Wars series. But those were all emotional explanations.

Then I realized that there was a technical answer to that as well.

Working with little subjects is one challenge of toy photography. You need to get to the eye-level of your subject (a golden rule in photography) to elevate and transform your object, connect with it and ultimately turn a toy into a real life subject. Yet you have got one harder challenge: your little plastic subject is not alive. It’s nice since it does not move rapidly and unexpectedly such as a bird or a baby. On the other hand, it does not move at all and that includes facial expressions and a spark in the eye.

In my playground of plastic people, I am quite used to working in an environment where every single figure has one fixed expression. I try to find new possibilities by the combination of different expressions over the faces of all cast in the scene (which is usually not a big number.)

Then there are Stormtroopers. 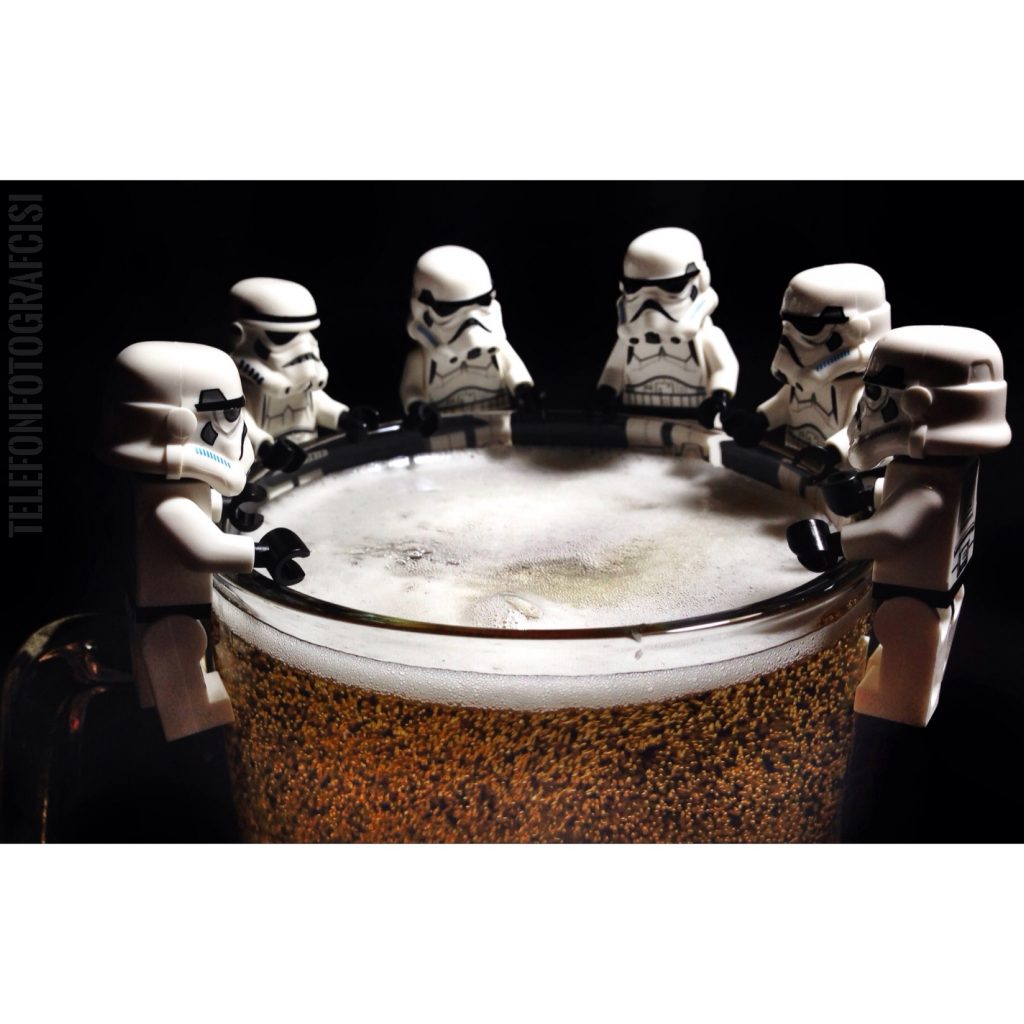 Yes, those tiny identical guys (or gals!) under the same identical, signature mask. They are my lead actors, without a face. They exist in Lego photography universe in so many forms of humor and jokes that they are literally the rock stars of the genre, toy photographers have told so many stories with them and still they have no single expression nor a sign of emotion to exploit.

So what lies behind this enigma?

Thinking this over now and then recently, I have finally found my version of the answer that was actually so obvious.

I normally use faces to add the “emotions layer” to my photos. Without faces, the only remaining chance to catch the emotions is the body language. Especially when I use multiple troopers at once, the slight angle of their heads downwards, the way that they lean on one side or the way I make one of them look completely the other way add all the glory. Likewise, when a single “Stormy” interacts with an object, be it some Lego utensil or a small real-life tool, every little twist you make on the figure will give you another chance to tell a different story.

And you really do not need to have a particular idea in mind when you are shooting troopers. All you have to do is just sit and put just one trooper in front of you. Then play with it. Turn his head in different ways, make him stand on an object or make him carry it, put another one next to him if you have the chance and then do the same alterations with the new one. You are multiplying the possibilities with every new one of exactly the same figures.

So, the challenge of being unable to change the heads is actually an advantage once you start to play it right!

Stormtroopers have a unique story behind their masks which helps you to take them to so many different environments and be welcomed universally, thanks of course to the Star Wars saga. In one sense Stormtroopers are very serious soldiers with a tragic story behind their existance, working for the dark lord of the Sith. But for so many people all over the world who are familiar with the series, they are also a bunch of clones who were unable to hit a single target with their blasters during the entire original trilogy.

So there is a priceless ground to play on here since you have got many universal emotions and feelings at hand (esp. if you’ve got Vader too): Failure, anger, despair, fear, , love, loss, hate, stupidity… to mix into some comedy, irony or sarcasm all through the body language of the stormtrooper, not limited by the smile on the face of the regular fixed expression. The universal mask allows me to tap in the endless possibilities of the body language of my troopers.

I will never be sure if my enlightenment have created the same spark of euphoria in you as well unless you would be so kind to share your opinions, but I believe I played some part at least in spreading the joy of toy photography from my own, inner perspective and may have triggered a new spark of experiment with you.

This is my second guest post in Stuck in Plastic, yet the first in Feature Friday series. So I would like to thank Shelly and Boris for packing up a guild of fellow followers to become a part of their wonderful journey, and for letting me be a part of it.

The journey, is the reward.

About the Author: Serhat T.

just a soul, whose intentions are good.