“Growing little worlds” sounds like a cheesy song title, but it’s a way to create little living habitats for toys to roam.

I was intrigued to see Luigi’s ‘Killer Score’ and ‘The Are Not The Droids’ setups, in particular the scale, or lack of, that he utilised to create these shots.

It was interesting to read Shelly’s post on the outdoors being studios. I especially liked reading that Kristina had shown Shelly that you ‘can do a lot with very little’.

I had some questions about how I set up my recent ‘Sticks and stones won’t break my bones, but surface rust will hurt me’ photo of an old car wreck in the woods. 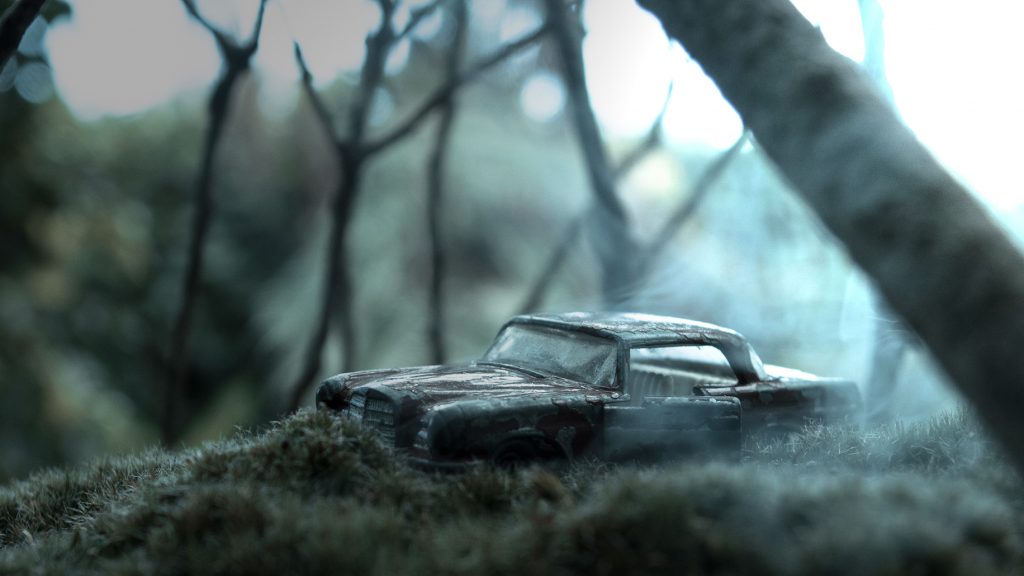 “Stick and stones may break my bones. But surface rust is a bugger to combat.”

These questions tie in nicely with getting an insight into Luigi’s use of limited space, Shelly’s proclamation that studios can be outdoors, and Kristina’s message about doing a lot with little.

As I’ve written about, my Easter weekend was spent exploring our property in search of moss; to photograph, and to harvest!

I picture things a certain way.
Then go back to it another day.
The green mind said it’s okay…
Dinosaur Jr. – Green Mind

When the summer sun isn’t belting down onto the ground, we have some amazing moss growing on our property. It hides under trees, in the paddocks and even pops up in the gravel of our backyard. However, try as I might, I could never get a decent photo with it.

The background was never right. Shooting under trees where the moss grows, the light was never right, even with the use of a reflector. And lying on the gravel in our backyard is just too painful!

Can you dig it?

These frustrations, coupled with only having the moss grow naturally for half of the year; I decided to take matters into my own hands. Well, my own hands and a garden trowel. 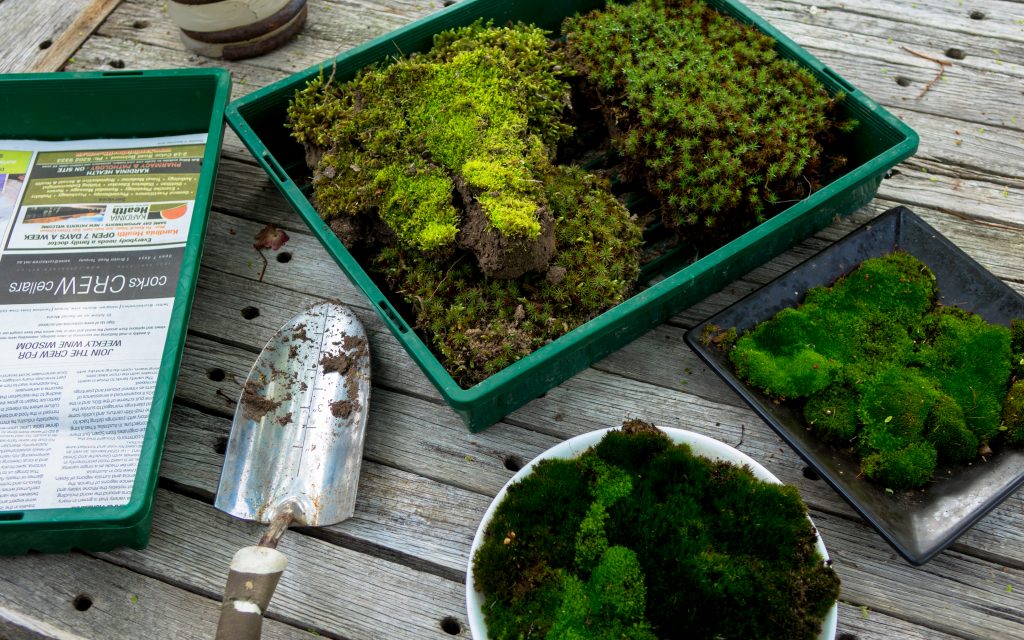 Collected moss. The smaller saucers are mosses collected from the gravel in our backyard. The tray holds mosses dug out from the paddocks.

By digging up this moss and planting it when the growing is good, I can dictate the background. I can control the lighting. And, when I remember to water it, I can use the growing little worlds I’ve created for toy photography all year round. Take that nature! 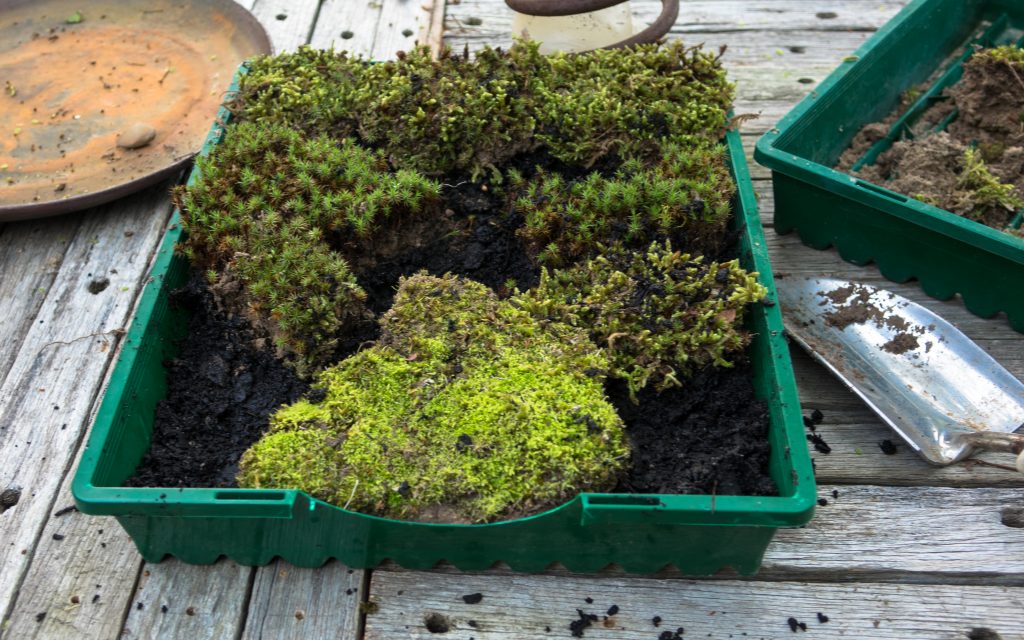 Planting the little world. I’ve learned that cutting out a curve at the front of the planting tray lets me get lower angles.

I have a couple saucers of moss growing at present. Last summer I ‘lost’ a few trays when I went away and forgot to water them. 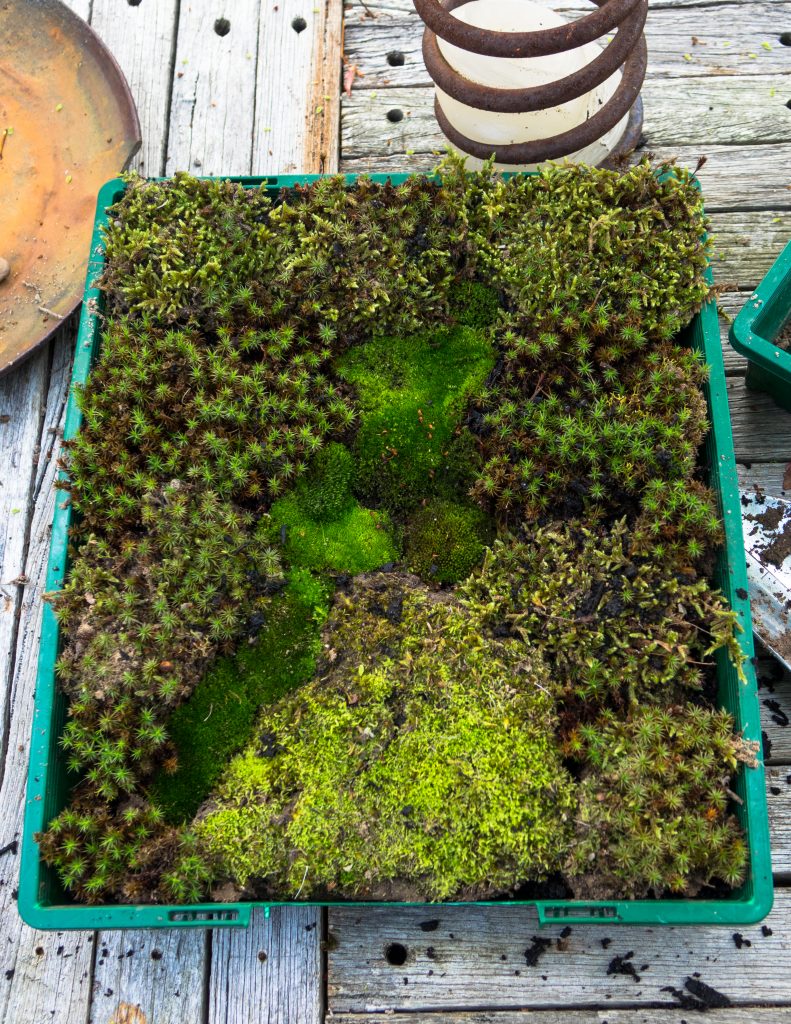 Filling in the gaps. One of the other things I love about moss is it can be torn or cut to fit any gaps in the landscape.

One of the great advantages of shooting toys with moss is the scale. I’ve been frustrated in the past trying to match the scale of the surrounding to the subjects. But when you find something that works, you don’t need much of it. As Kristina pointed out, you can do a lot with very little. A saucer of moss is more than enough of a setting for LEGO to play on.

I remember being taught the ‘ways of trees’ by my good friend @zenith_ardor years ago. Timothy creates some amazing dioramas with wood, nails, branches, plants and dirt. He taught me that a well-scaled stick or branch makes the perfect toy-sized tree. 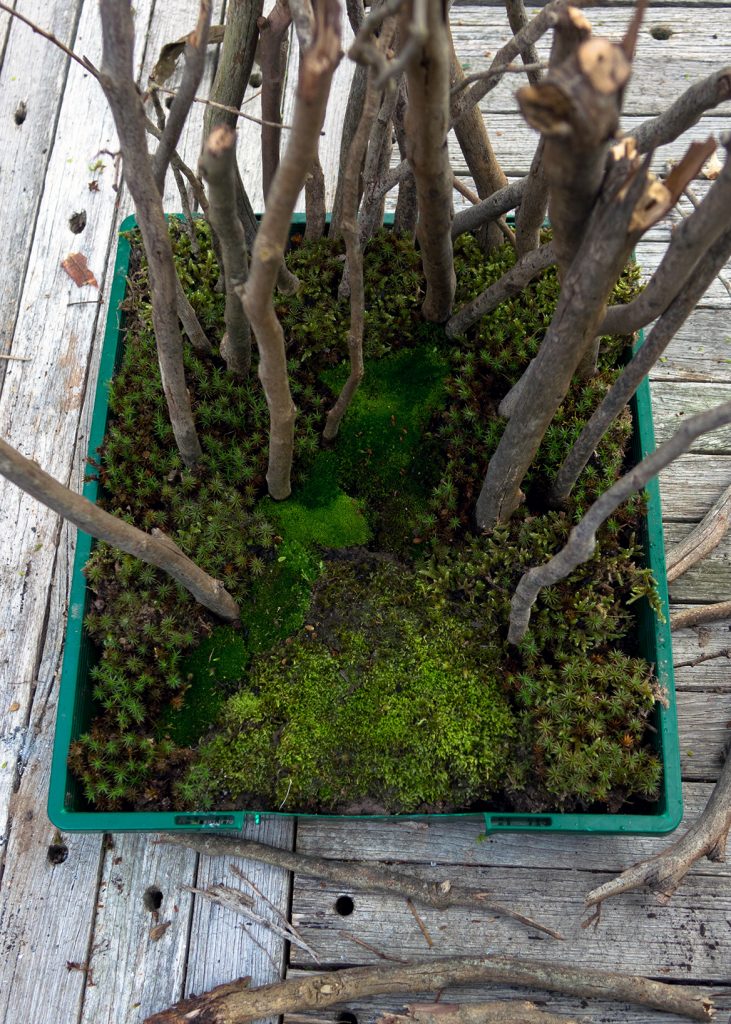 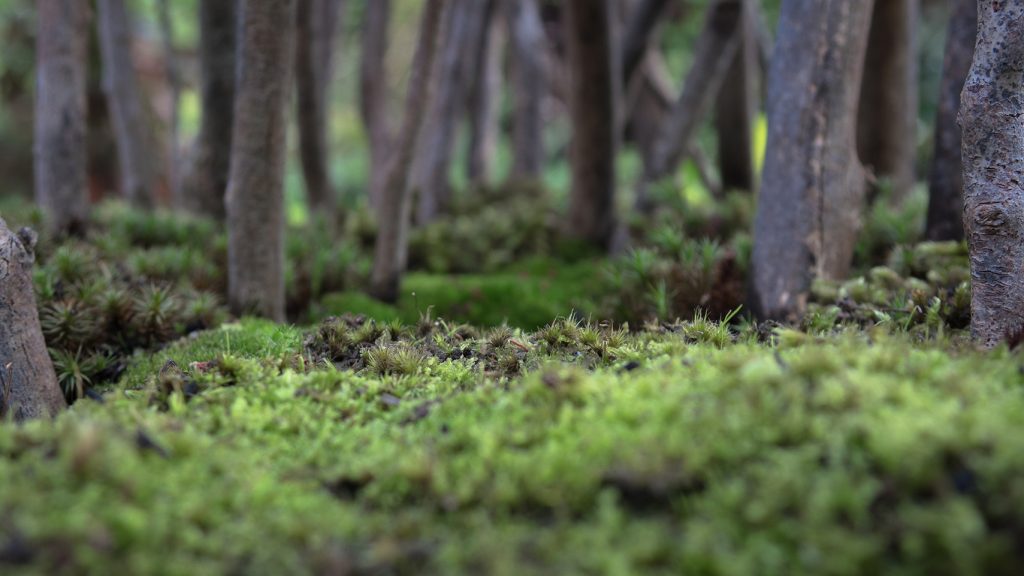 I’ve learned to check the positioning of the trees though the lens as I plant them.

Although I’ve quickly learned that just one wrongly positioned stick, once re-positioned, leaves a nasty crater in the landscape. So, I usually have the camera handy when constructing the forest to check positioning. And sometimes I position these ‘trees’ beyond and before the mossy scene, leaving it intact, and giving the impression of trees in the foreground and background. 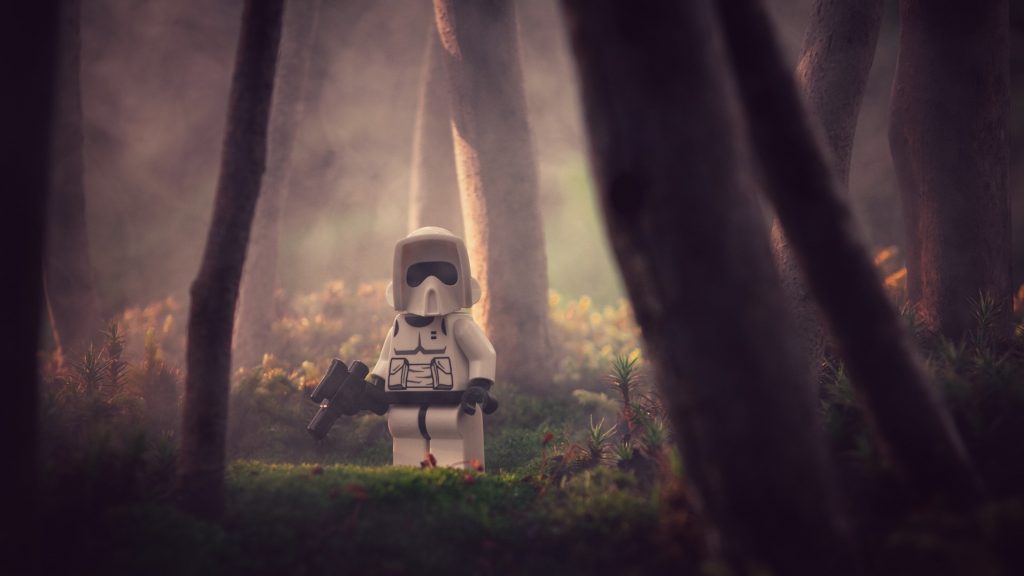 Lone Scout.
This created little world has the ‘trees’ ‘planted’ into the moss, and some added in the foreground beyond the “world’s edge”.

Under the pergola in our backyard, we have a table built from old farm fence posts, complete with the holes that once held fencing wire in place (see the planting photos above). These holes make ideal ‘planting holes’ for the miniature trees. And once the “trees are planted” into the table, the diorama can be positioned to be framed by the trees and capture the light just as imagined. Of course, when the holes don’t align with the vision, Blu-Tack also makes a great temporary base for these trees. 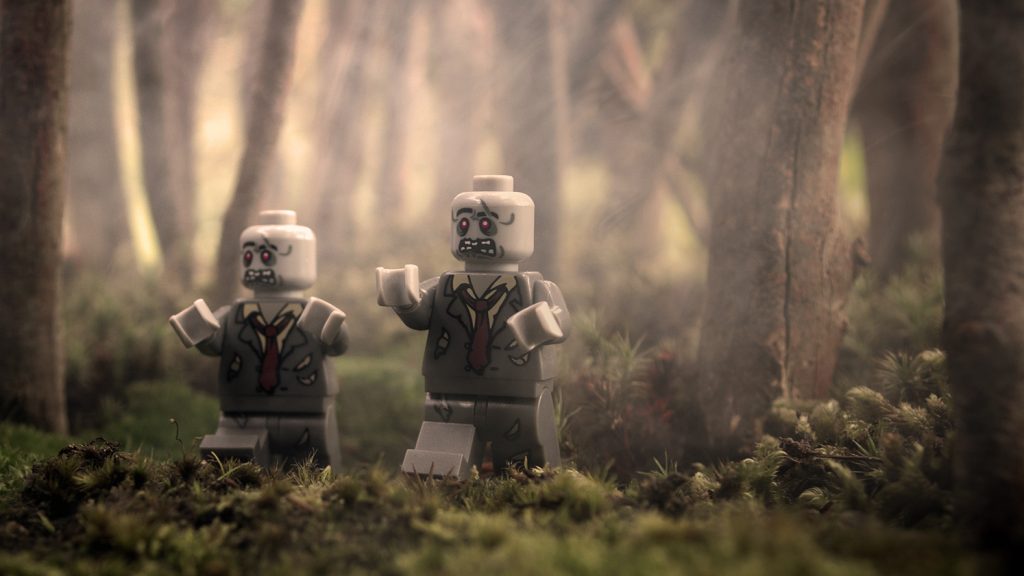 “Brians!” – dyslexic zombies
By moving the camera angle ever so slightly, the trees line up different and one diorama can produce plenty of varied shots. Or you can shot from the opposite end? Or the sides? The “created” world is your oyster!

Who’d have thought that photographing toys would’ve led me to roaming our paddocks with a trowel and a bucket? I’d never imagine that taking photos of toys would lead to me sketching landscapes to create. I’d never have guessed that some of my weekends would’ve been spent planting moss into plastic trays to create those LEGO sized landscapes. And I really would’ve never imagined audibly exclaiming ‘eureka’ when stumbling upon a ‘great patch of moss’ hidden under a tree’s shade!

It’d be remiss of me not to thank my wife at this point. She’s an avid ‘green thumb’, and her advice and knowledge concerning all things green and growing has been immeasurable in my growing little worlds.

I should also mention that we aren’t encouraging you to rush off to the nearest national park and start hacking away at the earth! Nor should you be lifting moss from any private properties! But if you can legitimately and legally get your hands on some moss, maybe think about growing little worlds of your own?

Do you create your own ‘toy-sized’ environments? Do ‘living dioramas’ little your backyard as well?