Creativity is a funny thing. Sometimes ideas seem to pop into my brain fully formed and ready to go. Other times they can take years to percolate and come together. This is the story of the later type. Specifically it took me almost 2 years to create my latest work, something I call “Here Be Dragons!”

I blame Game of Thrones, and in a weird way, COVID-19.

The nugget of the idea

Early in the pandemic lockdown, June 2020 to be specific, HBO Max offered two free weeks of the service. At the time I was wanting to watch Watchmen, so I signed up and binged – it took me 3 days. Since I had more time on my free account, I decided to catch up on Game of Thrones. I didn’t watch GoT when it was being broadcast, so I figured since I had no where else to go, and free access, it was binge time!

I got to the end of the series, when the dragons were doing their dragony things, and being all epic and awesome. There was one scene from the series finale that really caught my eye. it was a dragon flying by a stairway of a destroyed castle, illuminating the scene with his fiery breath. I liked it so much I grabbed a couple screen shots and stuck it in my ideas file:

There the idea sat… lurking in my mental and digital subconsciouses, waiting for its time to shine.

Loot Studios is a company that releases 3D models of DnD style fantasy figures on a monthly description. In December 2021 their monthly release included two awesome looking dragons. That caught my interest, tho I really couldn’t say why at the time, aside from dragons being fantastically interesting creatures. So I immediately downloaded one of them, printed it off, and painted it up.

And then, not really having a plan for a photo with it, I put it on my shelf.

A few months later Loot Studios released another set of files that included a wonderful heroine figure with two swords that looked like she was about to leap into action. Again, I printed it off, painted it up, and put it on my shelf beside the dragon.

Shortly after all of this while going for my daily walk, I recalled that something in Game Of Thrones had caught my interest with dragons. So I spelunked through my ideas folder and found the above screen shots. It was at this point that the idea started to take shape. Clearly I needed to make a scene of the heroine standing off against this magnificent and fearsome dragon. I mean, it’s obvious at this point.

With an idea fully formed in my head there is little I can do except act on it. I am only human, after all.

With the clear idea in my head I went about creating the final scene. I decided to place the heroine on a rocky outcrop, where the location puts her in a higher level of peril as she faces off the beast. So next step was to make my own rocky outcrop out of XPS foam and craft paint. I’ve covered the basics of making foam look like rocks in my Tombstone post, so I’ll skip all the details. However in a few hours I had a handy rocky outcropping in which to place my figures.

After that it was a simple matter of setting everything up in my studio.

The setup is pretty simple. I set up the figures in front of a TV screen, on which I displayed a stormy scene. The primary light was a Lume Cube Panel Go, mounted on a Platypod Ultra with a Gooseneck attachment on camera right. I added a second Panel Go on camera left to add a little bit of light to fill in the shadows and add details to the darker areas on that side. Finally I used a Microfogger smoke machine to add some atmosphere into the scene.

The rest was simply shooting the images, adding a few shots together in photoshop to get all the right smoke in all the right places, and doing some colour grading. The final image looks like this:

Totally worth the wait, if I do say so myself.

If you want to see the full process for making this image, check out this video:

I finished this image on June 8, 2022, almost two years to the day since I first watched the Game Of Thrones episode that ultimately inspired the final image.

Sometimes ideas come fully formed, and they can go from concept to final images in a few hours. Sometimes, just sometimes, ideas take years to develop. It almost always pays to take note of what inspires you when you see it, and squirrel it away for later. You never know when events will conspire to bring those nuggets of inspiration into fully formed concepts. The resulting images are almost always worth the wait.
[dave] 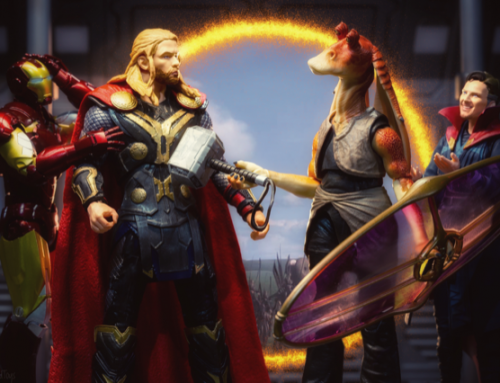 Adding a Little Magic to a Photo