Have you heard the news? Brickcentral has a permanent moderator team led by @fourbrickstall! This is great news and assures this important feature site has a long and healthy future. Now that the ‘new’ site has been officially launched they’re getting down to the business of inspiring toy photographers to create awe inspiring photographs. The first challenge in this goal is #bc-reboot.

The idea of the theme is to take a photo that maybe you weren’t happy with first time around, was taken early in your photo career, didn’t benefit from your sparkly new camera, or you think just needs updating – and reboot it! – Keith Lowry

Normally I don’t participate in monthly challenges, due to my own time constraints, but this one came when I was chasing an image. I’ve been messing around with the Ice Queen flanked by two Wargs since 2016. It’s a pairing that appeals to me. If I was an ice queen I know my pets of choice would be Wargs not reindeer. But that’s just me.

This is not the first time I’ve chased a photo. In fact I have a bad habit of taking the same toys out and taking photos of them in new situations. Each time I hope to get a better version of the same set up. The Ice Queen and her Wargs are one of those set-ups.

In fact I think its a great exercise to re photograph your toys and favorite set-ups. Maybe you caught the perfect image the first time, but in my experience my favorite photos have almost always benefited from being revisited. With each passing year my understanding of lighting, my equipment and editing gets better and this knowledge shows in the final photograph.

An evolution of a photo

My first attempt with this set up shows the possibilities of this trio. (Did you know that three is a magic number?) I like the juxtaposition of the angry Warg faces and the stoic grace of the Ice Queen. The background in this first image is properly uninspired and the image is a tad over exposed. While the image  shows promise I know I will want to revisit the concept. 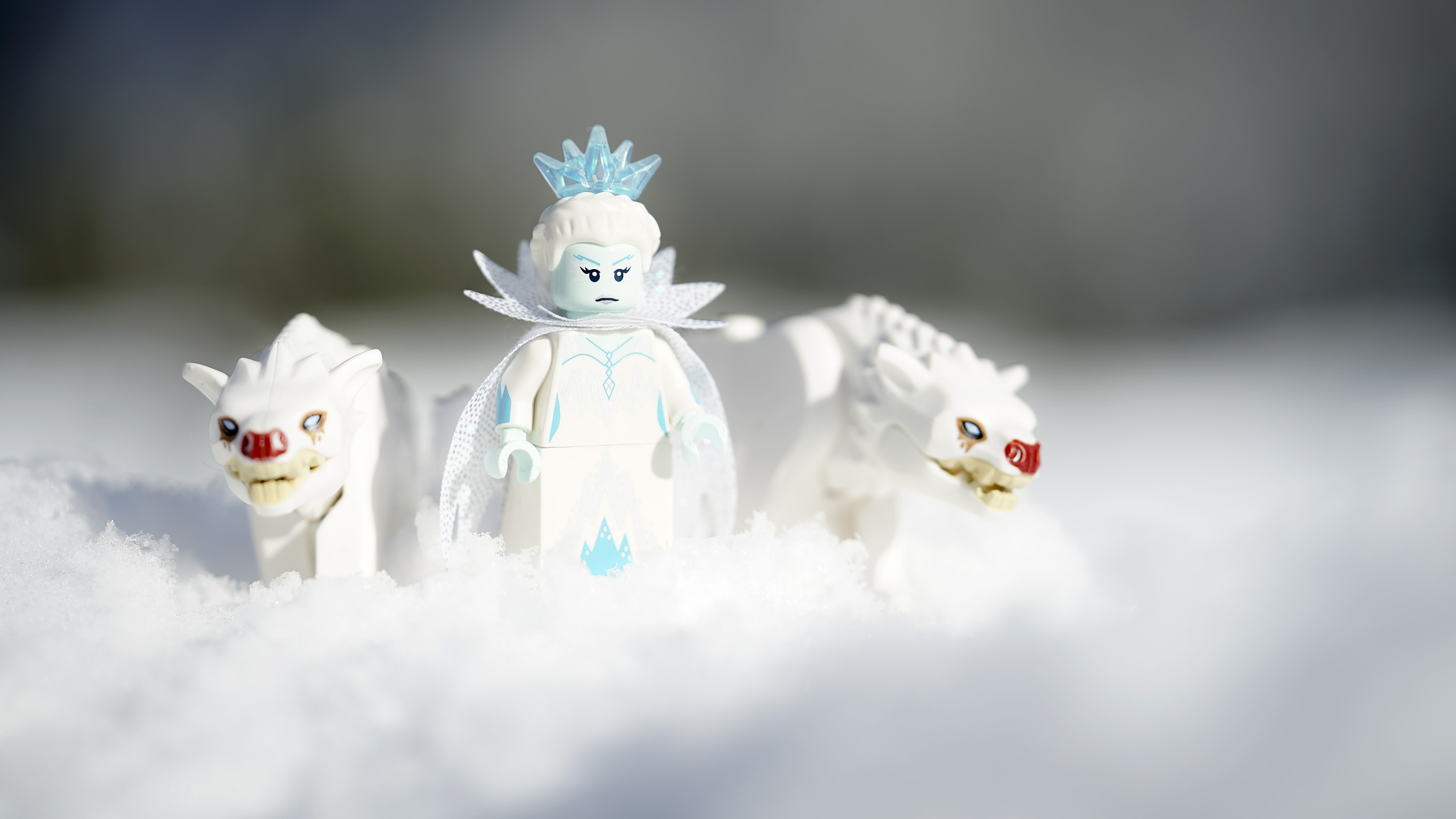 About this time I discovered photographing on a sheet of ice into the morning sun. I set up a little outdoor studio in the evening and would wake up to a fresh sheet of ice to place my figures on. I still use this trick today because I like how the light reflects up from below. The lighting is both bright and etherial.

Needless to say the Ice Queen and her Wargs came out and play!

I very much like the final results with this set-up. The bokeh in the background is lovely and there is nice fall off with the Wargs. The Wargs are facing in and help to keep the focus on the ice queen. In my earlier version I had them facing away and the image feels chaotic. This new version feels like a tighter composition to me. 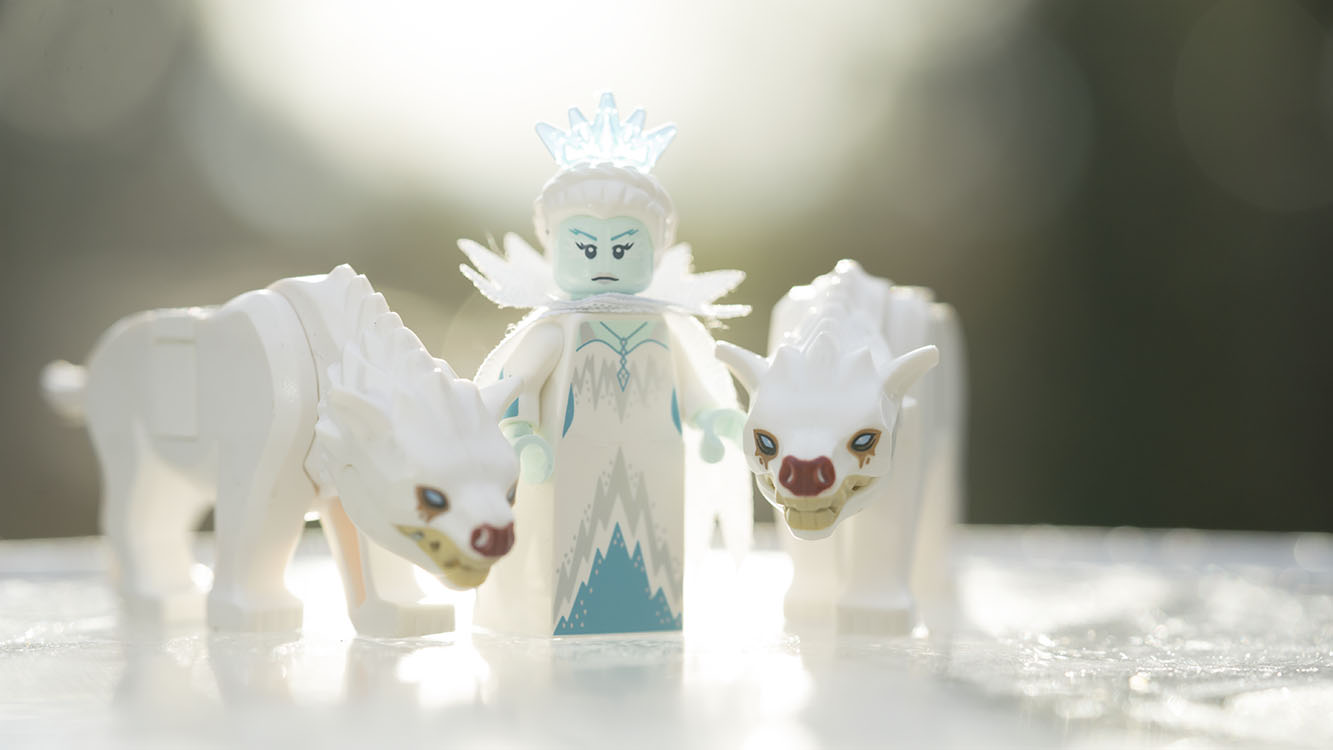 Winter has struck in the Pacific Northwest and its time to play in the snow. I’ve been spending many of my weekends snow shoeing or more recently enjoying the snow fall closer to home. This has given me plenty of chances to revisit this classic trio of figures. So out came the Ice Queen and her white Wargs. This time I upgraded the cloak of the Ice Queen with a fur cape and added the collar from the Shark Army General from the LEGO Ninjago Movie.

I will confess that I’ve been using the Lensbaby composer with a Sweet 50 and macro attachment as my primary lens. While I agree, in theory, with Tony that a little Lensbaby goes a long way (see his review of the Sol22), I’ve been enjoying my Composer too much to put it down. 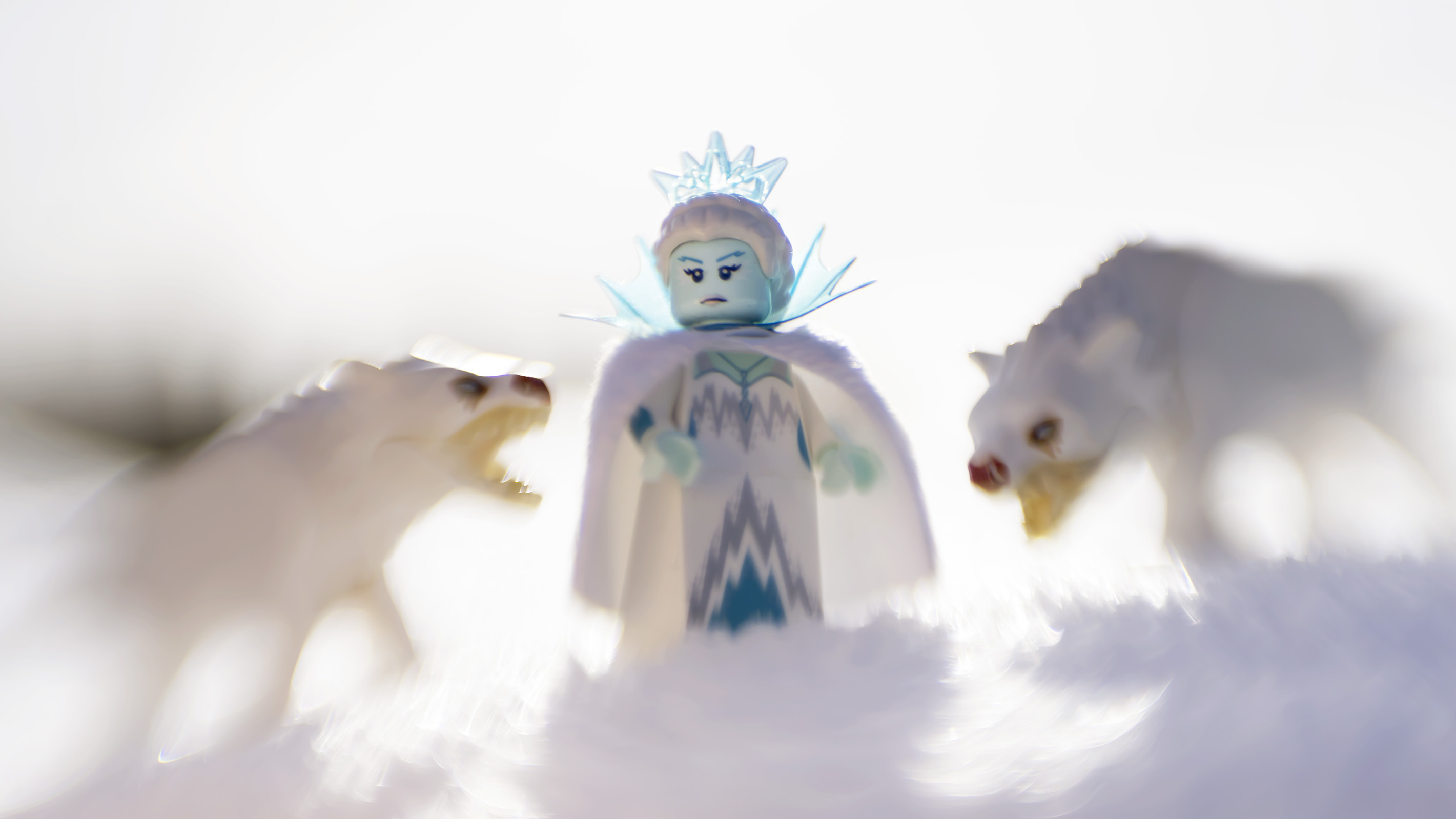 For the time being I think this is my ultimate version of this set up. I like how active the Wargs feel; one with his head up and the other with head down. I feel that they also act as leading lines to help focus on the main subject. I also like how the Lensbaby falls out of focus on the edges leaving the hind quarters of the Wargs in a blur. There is also a little bit of tree line in the background to give the image depth and background interest.

My biggest disappointment with this image is the lighting. While I had a portable light in front and to the left of the image on high, it was barely enough to compensate for pointing my lens directly at the sun. (I wonder if I will go blind doing this?) I had to do quite a bit of adjustments in post to brighten the queen and bring her to the warm tones I wanted in the final image.

Does this warrant a re-boot? Probably, but not for another year. I think I can let this trio rest until I get the itch to take them out again. Maybe I need to build a sleigh for the wargs to pull?

Re-boot. Is it right for you?

I realize that not everyone enjoys chasing down the perfect photo; much less looking back at older images and wondering how they would look now with new skills and / or new equipment. But if you’re interested in seeing how your skills have changed, I highly recommend giving the #bc_reboot challenge a try. It’s so much more constructive to compare your photography with your own work, than other photographers on social media. Because honestly our own opinions are the ones that really matter.

In the fast paced world of social media it’s so easy to get caught up in chasing the new.  New figure, new trend, new trick, new diorama…etc. But for me, I find it more artistically satisfying to bring out a few old friends and see what I can capture this time around. Every time I do this, I surprise myself. I never think I’ve improved, or that my work is changing. Yet, when I see my new work next to the old work, I can see the shift.

And that is very satisfying.