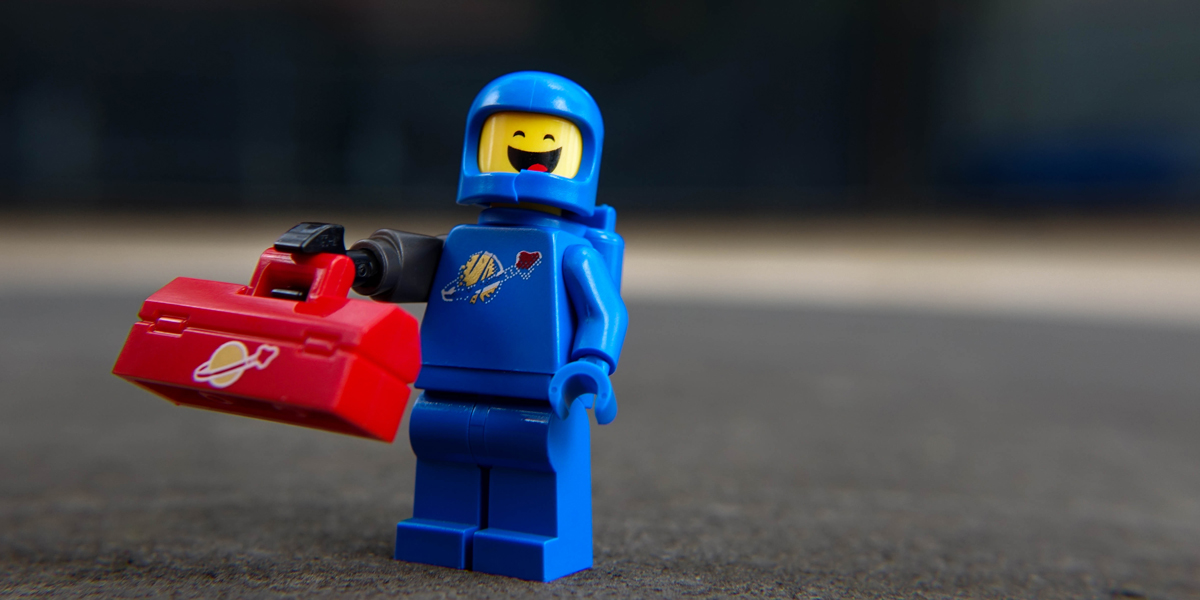 Thanks to The LEGO Group, we’ve been given the opportunity to review the upcoming LEGO Movie 2 Collectable Minifigure series due for official release on February 1, 2019. As well as reviewing, we’re also giving away a full set of the 20 Minifigures. But you’ll have to read all of the review before you get to read about that!

“Yo Emmet! Whatcha listening to?”

“Oh, Everything Is Awesome on your phone!”

The trademark little tuft sticking up at the back Emmet’s hair can’t even be contained by his headphones. But hey, when you’ve got ridiculously overpriced coffee and some great tunes playing, who cares!

There’s something very Rey from The Force Awakens about Lucy’s headgear, which isn’t a bad thing!

It’s no secret that I love the standard grin Minifigure heads. And I love the modern twist on these head prints that LEGO gives us with the Benny Minifigures.

And there’ll be no mixing up tool chests with Ned Flanders with that Classic Space logo printed on it either!

But why the robot arm Benny? Will The LEGO Movie 2 leave us wondering like The Force Awakens did about Threepio’s red arm?

Surely this is a nod to Toys R Us? Whatever the reasoning behind this Minifigure, it’s a wonderful addition to the series.

The plant piece accessory is a great addition too.

Despite first thinking the Crayon Suit Girl was somewhat lacklustre in the details and printing, I found her a joy to photograph.

Like the series 17 Rocket Suit Boy, there’s something wonderful about this shape when it’s in front of the camera.

Sherry Scratching Post has dusted off all the cat hair and changed her cat emblazoned top for an Apocalypseburg armoured outfit.

And Scarfield (clever!) with its studded collar, mohawk, Band-Aids, angry expression and bared fangs is one cat I wouldn’t want to tease with a ball of string!

With a slice of watermelon for the hand, and one for the head, this is another fantastic addition to the other  food costume Minifigures. The subtle shadow printing on the watermelon pips is a nice touch.

I can’t wait to see what happens when this Minifigure gets together with the Party Banana Suit Guy. What a tropical adventure that will be!

The Monster Fighter Swamp Monster gets a makeover, complete with chest tattoo, braces and pants!

Rex Dangervest gets a little country with his cowboy hat. Did the Wild West have baby dinosaurs? I guess that’s what made it wild.

We’re off to see the Wizard…

Hands down, these four Minifigures were the ones I was most looking forward to.

Dorothy is movie accurate in her gingham dress and white blouse, blue ribbons in her plaits, and the ruby slippers. I only wish she had a basket for Toto to hide in.

Toto is a reprint of Series 16 Dog Show Winner’s pooch.

Growing up, the Tin Man was my favourite character in the Wizard of Oz. He’s my favourite in The LEGO Movie 2 Minifigure series too! His silver colour is a joy to photograph!

And that heart? Oh my!

Certificate of Achievement? Achieving a movie realistic Minifigure no doubt! Scarecrow is another wonderful Minifigure in this series.

Scarecrow’s Certificate of Achievement printed tile has so much potential for whimsical toy photos!

There’s something about the caramel colour of the Cowardly Lion I’m not sure about? I can’t put my finger on it, but maybe it’s that the face seems to blend into all the rest of the same colour?

His bravery medal however, is wonderful!

I’ve always liked President Business’ head prints. And this one is no exception, with one side looking like a “I just missed a 2-inch putt for birdie” expression, and the other the grin of someone who made the same putt.

However, it is overshadowed by the wonderfully printed golf outfit. I’ve only ever played two holes of golf in my entire life, but if I could’ve a snazzy green argyle knitted vest to go over a white polo shirt, with matching green argyle socks to tuck my beige plaid pants into, I’m sure you would’ve found me out on the golf course more often.

The golf club is wonderful new addition to the Minifigure accessory collection. Fore!

We’re getting the back back together…

Lucy’s flashback must be to the 80s, because her leotard is 80s overload! The gold record for the “Everything Is Awesome” is a great accessory.

I do wish there was more hula for Lula, but the new record is a nice addition.

Oh, the pun names never fail to make me laugh! And how cool is that tape. Remember tapes kids?

Again, I assume the name is a reference to K-Pop. If it is, well played LEGO!

Abe goes steampunk! There’s a lot to like about this Minifigure, from the detailed torso and leg printing to the addition of goggles to Abe’s stovepipe hat.

Undoubtedly steampunk enthusiast will be clambering to get this one!

Unikitty makes a surprising appearance in this series. Didn’t we just see a series of Unikitty?

But hey, when you’re that cute, who cares about details? And you can never have too many Unikittys!

We have a full set of the 20 Minifigures from The LEGO Movie 2 Collectable Minifigure series to giveaway!

Share your photos on Instagram or MeWe using the tag #tp_LEGOMovie2. You can enter up to 3 photos, and you can submit them until February the 3rd. We will pick our favourite photo after then and announce the winner that week.

Just a knucklehead with a camera, a bunch of toys & some words.
View all posts by brett_wilson →